Believe it or not, the year 1928 produced two groundbreaking, avant garde adaptations of Edgar Allan Poe's "The Fall of the House of Usher." In America, James Sibley Watson, Jr. directed a 14 minute short film without 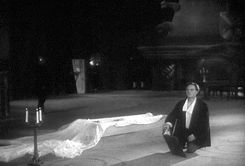 Though similar to Poe's story in essence, Epstein's film takes drastic liberties with the particulars, proving that movie audiences have been getting watered down renditions long before the days of Hollywood. Allan 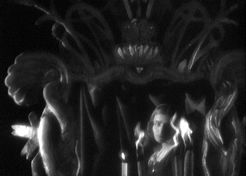 (Charles Lamy) undergoes a lengthy, difficult journey, stopping off in a superstitious village to seek directions to the house of Usher. Finally he arrives to find his friend, Roderick (Jean Debucourt), distraught over the degenerative illness afflicting his wife, Madeleine (Margeurite Gance, wife of Napoleon director Abel Gance). A doctor (Fournez Goffard) also lives on the premises to tend to Madeleine's "condition," while Roderick passes the time by preserving her beauty on canvas before she fades away entirely into a catalyptic trance from which she may never awake. Tragedy eventually strikes... but the horror is far from over.

From a visual standpoint, Usher is an absolutely remarkable film crammed with one breathtaking surprise after another. The elaborate outdoor funeral procession superimposed with flickering candles, the appearance of Madeleine cloaked in a diaphanous shroud, and several eerie, floor level tracking shots tearing down the hallways amidst flurries of windblown leaves are just a few of the highlights borne from Epstein's lens. Unfortunately horror fans will have to 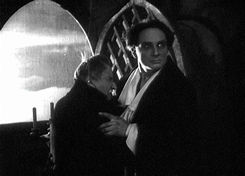 throw out any preconceptions about the Poe story to accommodate Epstein's narrative, which throws out the entire implied incestuous angle by making Madeleine the wife instead of the sister, thus requiring a wholly unconvincing happy ending out of left field. At least Epstein acknowledges his manipulations by incorporating some nice references to other Poe tales, most notably "Ligeia" and "The Oval Portrait," while the decaying atmosphere of the house itself is wonderfully gothic and oppressive.

AllDay's lovingly prepared DVD presents what appears to be the only acceptable surviving film material, prepared in 1980 with French intertitles and spoken English translation. The accompanying music score is in many ways worth the price tag all by itself; a chilling and often beautiful quasi-medieval accompaniment laced with mandolins and dulcimers, this lies somewhere between Dead Can Dance and The Name of the Rose, adding immeasurably to the film and crafting a haunting listening experience in its own right. Overall, despite its shortcomings, the Epstein Usher is a fascinating, worthy adaptation of a familiar tale, and fans craving a hefty dose of surrealism with their Poe should be delighted with its eerie charms.