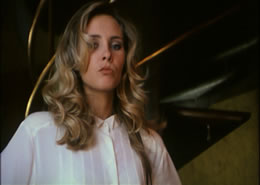 From the opening moments in which we see a pig undergoing a cringe-inducing bit of surgery, it's clear Traps is going to be a little different from the giddy, anarchistic 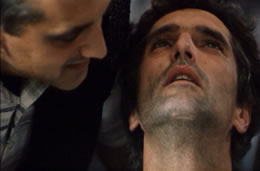 surrealism of the more famous early films by director Vera Chytilová (Daisies, Fruit of Paradise). There's still comedy here aplenty, but it's of a very dark and biting kind that may still be a bit too much for some viewers. Of course, that also makes it a highly recommended watch as we find the Czech filmmaker striding into territory somewhere between Marco Ferreri and Lina Wertmuller.

While out for a drive in the afternoon, womanizing ad man Petr (Hanák) and frumpier local government official Donhal (Donutil), a pair of old classmates both trying to win the favor of a corporate contractor, end up passing the broken-down car of a young woman, Lenka (Stivínová). They offer to give her a ride into town but instead take her off to the woods for a highly unorthodox rape scene she manages to survive only by pretending to have amnesia. Afterwards she invites them into her home for a drink and exacts a revenge her veterinary training and the opening sequence have already foreshadowed, leaving their manhood permanently compromised. The bulk of the film charts the fallout from these two events, with Lenka dealing with the questionable attitudes of her boyfriend (Svoboda) and both men trying to cope with the drastic change in their day-to-day lives and a pesky ad campaign 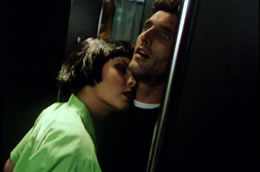 that takes on a very different tone for Petr.

Despite the subject matter and sometimes very grim tone, Traps still qualifies more or less as a comedy with a particularly acidic look at the war between the sexes. Neither 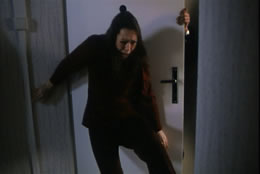 side comes out unscathed here, so anyone look for a simple feminist power statement is going to find the material difficult to digest at times; the ending in particular goes to some pretty twisted places, psychologically speaking, and overall it's going to come as a big surprise compared to the director's prior work available on home video. Hopefully even more will be forthcoming so we'll get a fuller picture of her fearless, wildly unpredictable output.

Traps was never officially released in an English-friendly edition anywhere in the world until the 2015 DVD from UK label Second Run, whose transfer is probably from the best source available; there's notably none of the usual HD mentions for the transfer, and it looks a tad duller and drearier than their usually immaculate presentations. Given the rarity of the film though that's an easy debit to overlook, and it definitely looks like a title released in the late '90s with its somewhat clumpy textures and muddy blacks. The English subtitles are optional and, as always, excellent. The sole extra is the usual liner notes booklet containing a lengthy essay by Carmen Gray about the trajectory of Chytilová's career, her attitudes on feminism, and her temporary ostracizing in her native country.