The trailer compilation has been a home video staple since the early days of videotape swapping; needless to say, drive-in trailers encompassing horror, sci-fi, sleaze, and action have always been the most popular thanks to their endless hyperbole and the ability to condense a feature's worth of mayhem into two head-spinning minutes. Cobbling together every exploitation variant under the sun with some hilarious linking material, Trailer Trash offers an amusing two-hour journey designed to appeal to the novice and seasoned pro alike. 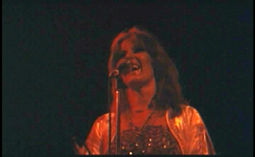 The disc kicks off with a whirl of theater promos including a typically over-the-top, hammy welcome from Dom De Luise followed by that familiar old "Prevues of Coming Attractions" trailer and a disorienting theater welcome apparently written by someone on acid. Fox's long-unavailable All This and World War II trumpets the involvement of Paul McCartney and John Lennon for a musical trip through vintage 1940s propoganda footage, featuring a bevy of musical guest stars including Elton John, the Bee Gees, and the Four Seasons(!). The beloved Blacula is the same trailer present on MGM's DVD, showcasing everyone's favorite African prince bloodsucker in action. The incredible Lola features a shaggy-haired David Hemmings (Deep Red) dominating the sexy Andrea Rau (Daughters of Darkness) in a prime chunk of Eurosex goodness, released on video ages ago as Beyond Erotica. The last entry in the popular Sonny Chiba series, Sister Streetfight contains the usual martial arts mayhem including some brutal antics that forced New Line to eviscerate the film in order to appease the MPAA. Available on a Something Weird DVD double bill, The Wonderful Land of Oz is sublime cinematic child abuse from Barry Mahon complete with cheapjack creatures and the most brain-freezing songs this side of a K. Gordon Murray Mexican kiddie festival. In Big Dog Lost, a big Great Dane finds its way back to its owner in what looks like a cheapo cash-in on the popular Lassie and Benji entries from the mid-'70s. The infamous Bless the Beasts and the Children takes a stand against animal slaughter by bombarding the viewer with nauseating (but PG-rated!) scenes of buffalo slaughter accompanied by the familiar Carpenters theme song. A young girl's forced amputation proves to be an obstacle to love in Prelude to Happiness, apparently a no-budget American rendition of Luis Bunuel's Tristana. Or maybe not. The bad taste stampede continues with The Diary of Knockers McCalla (another SW trailer staple), a black -and-white oddity packed with so-so nudity and top-drawer overripe narration. Sonny Chiba pops back up for The Streetfighter's Last Revenge, the series' third entry which escaped only slightly less mutilated from the MPAA and comes complete with loads of gory head-bashing, neck-chopping and much, much more. Sweden's most adored supergroup takes center stage for ABBA: The Movie, 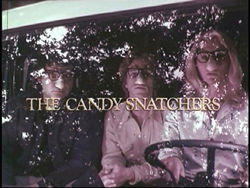 a scope documentary by Lasse Halstrom(!) capturing the fantastic foursome at their peak. Now here's one that needs a letterboxed special edition right away! Dave Friedman fans will already be familiar with the trailer for Bummer, a low-voltage tale of a rock group and their kinda-devoted female followers.

By far the highlight of the entire set, The Touchables (now languishing somewhere in the Fox vaults) is one of the holy grails of British sexploitation. Penned (and reportedly co-directed without credit) by Performance's Donald Cammel, this swinging, futuristic, gender-reversed take on The Collector screams out for rediscovery. Then it's business as usual with the JD favorite, Teenage Gang Debs, and the H.G. Lewis birth control oddity, The Girl, the Body, and the Pill. The Switcheroo offers plenty of kinky, half-naked partner swapping in the tropics; Sonny Chiba rears up again to kick butt in The Bodyguard; and most bizarre of all, Albert Brooks turns up to plug his upcoming early feature, the PBS take-off Real Life (now on DVD from Paramount). God only knows what the headbanging weirdness of Stunt Rock is meant to accomplish, but fans of Hollywood busts will enjoy the text-only trailer for the notorious, X-rated Anthony Newley misfire, Can Hieronymous Merkin Forget Mercy Humppe and Find True Happiness? Now obscure for good reasons, this one sounds a lot more salacious than it really is. The very graphic Use the Back Door features some almost-hardcore antics including plenty of lesbian and solo activity, the perfect segue to... uh, The Seven Brothers Meet Dracula, the late-hour collaboration between Hammer and the Shaw Brothers. The sub-Matt Helm spy spoof Kiss the Girls and Make Them Die looks like a standard programmer from the period, while The Molesters plays like an educational film made for the 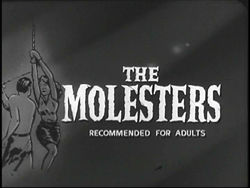 raincoat crowd. The incredibly popular The Candy Snatchers (still sadly unavailable on legit video) makes an appearance (without spoiling some of its key plot twists); an obscene phone caller goes looking for love in The Telephone Book; a huge-haired vampire runs around causing mayhem in Voodoo Heartbeat; Ennio Morricone's classic evil-disco score forms the backbone of Exorcist II: The Heretic (available in better condition on that feature's DVD from Warner); a snake-haired siren attacks unsuspecting, squealing men in Devil Woman; another snake-haired female pops up in the middle of other rampaging monsters and midgets in the amazing-looking Bruka, Queen of Evil; Olga's Dance Hall Girls offers the usual naked women and torture; the Findlays do their thing for the seedy crime drama The Sin Syndicate; Jerry Warren spits on the famous comic franchise with the notoriously awful The Wild World of Batwoman; and women in prison strike out for fun, adventure, and murder in the hard-to-see Sweet Sugar.

Next Arch Hall, Jr. sneers his way through the fan favorite The Sadist (always a good one to revisit), while the '60s drug scene gets its due with Albert Zugsmith's Movie Star, American Style, or LSD I Hate You. The familiar SW favorite, Musical Mutiny, pops up again in similarly ragged condition as Barry Mahon captures less-than-stellar acts at an amusement park, while Michelangelo Antonioni's infamous MGM pro-revolution treatsie Zabriskie Point, gets its due with a suitably trippy trailer. (The equally good teaser can be found on the rare MGM laserdisc, too). The familiar Rudy Ray Moore trailer for Dolemite pops up, followed by the far more obscure Ralph Bakshi blaxploitation-era Song of the South parody, Coonskin. Finally, Neil Diamond warbles for the legendary misfire, Jonathan Livingston Seagull, in which the touchy-feely bestseller was ruining by having its feathered hero talk.

Along with the aforementioned trailer, you also get a helping of off-the-wall interstitials including "Mad Machine" (which urges patrons to unleash their pent-up rage on some sort of device out in the lobby), "The Amazing Dr. Chicken" (a Bible belt chicken ad), and most memorably, a daffy final bit in which a group of Krakatoans obscenely grope and leap on each other much to the consternation of a white reporter.

Obviously, little else needs to be said. You need this.