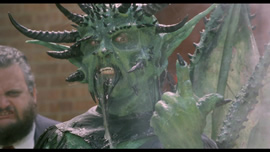 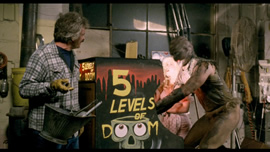 The massive cult success of 1984's The Toxic Avenger was a major turning point for New York-based Troma Entertainment, which realized the potential for churning out franchises featuring its most outlandish characters. In 1989, the company mounted two back-to-back sequels that tremendously expanded the Troma universe, with the second film even cashing in on the character's popularity in Japan by setting part of the story in that country.

Released on the heels of that outing was the third film, whose title riffs on the previous year's controversial The Last Temptation of Christ with the film itself containing nods to a horde of other late '80s films, most notably Angel Heart (complete with an Apocalypse Inc. exec mimicking Robert De Niro's character). This also turned out to be the most self-referential entry in the series complete with characters making jokes about the film's low budget (including a demand for a million dollars dropping down to thirty) and, in perhaps the most memorable scene, an early showdown in a great vintage video store layered with classic Troma posters and even a standee for the first Toxie film.

That video store opener finds Toxie (Fazio) striking a violent blow for the survival of indie video stores in the fact of corporate attempts to force people to only rent the five most popular current titles, a battle that would soon be lost in real life (at least temporarily) by the end of the following decade. That turns out to 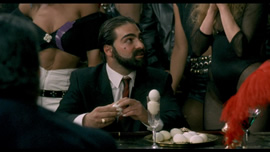 be our hero's last big deed for the city of Tromaville, and soon he's moping around without any villains to defeat. An opportunity 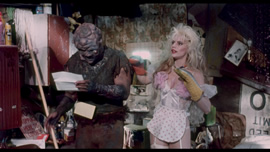 arises for a new surgical procedure to restore the sight of his eternally perky girlfriend, Claire (Legere), and though the operation's a success, it means he needs to start earning a steady paycheck. Of course, this all turns out to be rigged by the nefarious Apocalypse Inc., the baddies from the last film, who have gone beyond plotting the bribery and murder of their foes to a more ambitious plan involving the machinations of its chairman (Collins), who turns out to be the devil himself. To defeat the satanic menace, Toxie has to undertake a series of Herculean labors through the doom-laden layers of hell itself.

Obviously assembled in a hurry, this particular outing tosses basic story logic out the window at the beginning (with Toxie inexplicably failing to recognize his antagonists from the previous film) but offers its fair share of ridiculous highlights, most of them tucked into the first and last half hours. Legere and Fazio make for a fun team as always and the trademark ludicrous humor is still here, though the graphic blood spraying and perversity of past outings is significantly toned down here in favor of a more skit-driven comic book approach. This may have something to do with the fact that much of this is reputedly cobbled together from unused segments for the prior film, and the fact that it 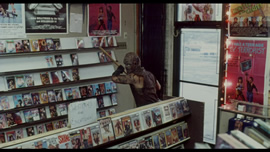 manages to hold together at all as any sort of narrative is kind of amazing. In any case, Toxie fans have had a tough time with this one but it's still part of the official canon with a few scenes that still work like gangbusters. Incredibly, it took eleven years for Troma to mount the fourth (and final, to date) film in the 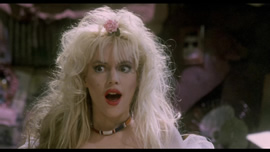 series, Citizen Toxie, which is arguably the best of them all.

As with the other films in the series, this one was sent to theaters in an R-rated cut that turned out to be significantly less eviscerated than its predecessors. Clocking in 19 seconds shorter, the R-rated version loses some mayhem from the video store sequence including some mop/cranium nastiness and an extended, ridiculous look at one villain's lack of "intestinal fortitude." (However, Toxie's memorable jump rope with the gory aftermath remains intact in both cuts.) The unrated director's cut has been a mainstay of DVD for quite a while, with extras including audio commentaries by Lloyd Kaufman and regular Troma actor Joe Fleishaker, three minutes of on-set footage from Citizen Toxie, the usual unrelated Troma promotional bits, and video interviews with Fazio, Collins, Fleishaker, Gay Terry, and Tracy Mann, plus trailers for all of the films in the series. 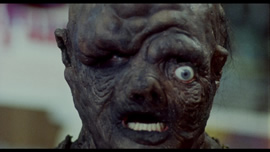 released the first Blu-ray of this film and immediately drew the wrath of fans by including only the R-rated version, with extras including the relevant ones from the prior DVD (including both commentaries) and a new HD video intro by Kaufman. More interestingly, it also includes a handful of alternate snippets included in the Japanese release of the film, 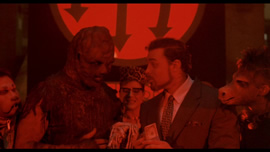 while the packaging includes liner notes by Calum Waddell.

Released seven months later, the American Blu-ray/DVD combo from Troma tries to dodge that bullet by prominently noting the inclusion of the theatrical cut on the Blu-ray, with the unrated one on the DVD (the same transfer and extras as before). The Blu-ray ports over the commentaries and Toxie trailers, along with a batch of other unrelated Troma ephemera as usual. The transfer itself is by far the best this film has ever looked, with the intentionally drab color scheme of the opening act giving way to a very colorful, candy-hued palette once the really fantastical story elements come into play. The Dolby Digital audio is less impressive, though the lossless counterpart on the UK release doesn't boost things all that substantially given the flat and often tinny nature of the original source.