Time may have dulled the edge a bit off of Fright, an early entry in the babysitter-in-distress cycle which took off with 1978's Halloween, but fans of offbeat thrillers should find enough to enjoy in this erratic 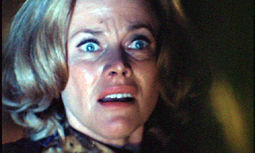 but well acted shocker. Perpetually abused sex kitten Susan George (who went through even more hell the same year in Straw Dogs) stars as Amanda, a blonde teen in a short skirt whose babysitting job for socialite Helen Lloyd (Honor Blackman) leaves her in charge of a young child, Tara (played, disturbingly enough, by the son of director Peter Collinson). A number of vague, scary incidents set Amanda on edge, even after her less than appealing boyfriend shows up. Soon it's clear that a homicidal maniac is at work here, and his connection to the household may be closer than Amanda realizes. 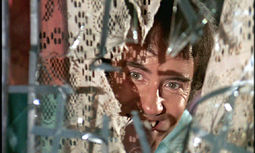 An oddly melancholy and brutal film, Fright is never really explicit but captures that odd, distinctly English nastiness found in other Collinson films like The Penthouse and Straight on Till Morning. For once the '70s setting is largely kept to the background, rearing its head mainly when we're treated to the sight of Blackman frugging to some groovy lounge music at a cocktail party. Otherwise the film works as a decent precursor to the likes of Black Christmas and When a Stranger Calls, both of which may have taken a page or two from Collinson's book. (Note the swinging clock pendulum shots, for one.) As much style as the film has to burn, however, it's hard to conceal the fact that this film is sometimes creepy and disturbing but never really frightening. The scares are poorly timed and often ruined by clumsy zooms, while Bannen's leering psycho routine goes overboard near the end and nearly derails the entire film. 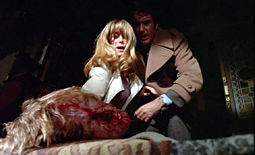 Anchor Bay's DVD looks much better than the previous VHS releases (the most widely available one as an EP-mode edition from Republic). The 1.85:1 framing crops off some peripheral information at the top and bottom of the screen compared to past transfers, but it doesn't seem detrimental to Collinson's compositions (which include some interesting, handheld shots). Since the film takes place at night and mostly in deep shadows, the conversion to a digital format could have been an artifact-riddled nightmare; fortunately these problems are kept in check with a relatively smooth, film-like appearance, with that beloved '70s film grain only rearing its head when it should. Mono audio is also acceptable and appropriately piercing whenever George lets out a good scream. Extras include the long, hilarious theatrical trailer ("Babysitter!") and a very informative Collinson biography sprinkled with quotes from his widow.

On a sweltering afternoon in the dead of summer, police lieutenant Jim Wilson (Oliver Reed) says goodbye to his colleagues and prepares for his last day on the job before returning to his hometown away from the depressing grind of the city beat. Meanwhile, the volatile Frank (Stephen McHattie) has just returned to town and plans to reunite with his girl, Janie (Susan George). While having a drink at a bar, he learns that Janie now has a new man in her life, "one who can afford her." Frank loses his temper and winds up losing in a bloody brawl. Bruised and battered, he staggers to Janie's small house and berates her for being unfaithful to him. A passing police officer hears the squabble and comes inside; Frank orders the officer outside and begins a scuffle, during which the officer is accidentally shot with his own gun. Faster than you can say Dog Day Afternoon, more police swarm outside and soon the entire city comes to a halt, as Jim and his fellow officers try to avoid further bloodshed. One of the later films by British cult director Peter Collinson (The Italian Job, The Penthouse), this uneasy crime drama bends over backwards trying to convince viewers that they're watching American actors in an American film. Flat, awkward accents and bizarre fabricated slang abound, with Reed and George in particular seeming far too focused on their enunciation to be believable. Had the film stuck to a gritty British setting and aimed for a Get Carter style atmosphere, it could have been a real gem. Instead what we get is something quite odd, an inert police standoff that drags on for over an hour as McHattie (fresh off his disastrous leading turn in Look What's Happened to Rosemary's Baby) and George patch up their relationship inside. Raymond Burr even pops up occasionally for no good reason as Reed's supervisor, and Donald Pleasance has a glorified cameo as a doctor. The film isn't a complete washout, however; Collinson's direction offers some ingenious visual moments, particularly when he focuses on the plot's impact on the tourist population. Prolific '70s composer Roy Budd also pitches in with a catchy, diverse funk and jazz score that keeps the film percolating even when nothing is happening onscreen. Former James Bond crooner Matt Monro is even on hand to warble the overwrought theme song, "Alone Am I." Completely ignored and impossible to find in America, Tomorrow Never Comes has been released as an installment in Carlton's budget DVD line of Rank Organization titles. The open matte transfer is extremely clean and vividly colourful, with the typical '70s softness and graininess kept at a surprising minimum. The barely stereo soundtrack is clean and strong, with some channel separation evident in the background music. A real oddity for crime film fanatics and devotees of bizarre film casting, this is worth the low price tag despite the film's often crippling flaws.