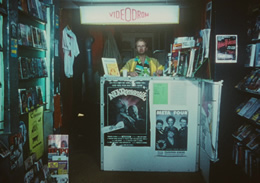 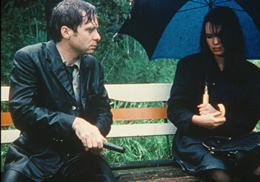 After causing an international stir in the horror community with his word-of-mouth cult favorite Nekromantik, German director Jörg Buttgereit returned three years later with an extension of his grisly art film aesthetic. Though undeniably macabre and grim, this second outing tones down the outrage factor (no bunny footage here) and dispenses with the sexual component entirely for a unique miserablist concept: seven suicides carried out over the course of a week, each displaying a different aspect of how death can be approached and offer a perspective on the value of life itself.

Framed by a children's drawing of the title character (who makes people not want to live anymore), the film doesn't have a traditional plot per se but does have a formal structure divided into those seven acts, with footage of a naked male corpse's decomposition acting as sort of interstitials between each one. From a couple embarking on a murder/suicide to a video consumer diving into the depths after watching an insane parody of the Ilsa films, it's a clever construction with several moments of brilliance tied directly to the German locations (especially the bridge sequence). It's also a canny study of the effects of watching cinema itself, with movie theaters and home video playing a large part and the film itself even stuttering and threatening to tear apart at one point to mirror one character's self-destructive conversation. That aspect reaches its apex near the end when the penultimate 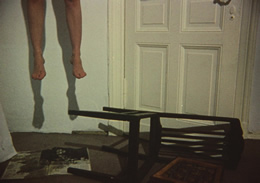 segment features a woman donning a Super 8 camera to her head for a violent outbreak, a scene that still feels a little too raw for comfort. 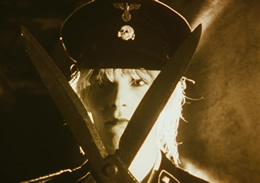 While both of the Nekromantik films have remained fairly easy to obtain worldwide on home video, this one has been far more elusive since its VHS release in the '90s by Film Threat. Fortunately it's been resurrected for English-speaking territories by Cult Epics for its dual-format Blu-ray and DVD release, which follows its Buttgereit predecessors courtesy of a 3,000-unit deluxe run complete with a cool embossed slipcover and an enclosed postcard for the now-familiar documentary about Buttgereit's films, the 58-minute Corpse Fucking Art (which is also included here in a fresh new HD scan, looking better than ever).

The transfer of the main feature is also a much-needed HD revisit from the original 16mm negative; there hasn't been much in the way of retouching or restoration, but it's a massive improvement across the board compared to anything we've seen before. There's a substantial amount of raggedness and damage during the opening credits, but afterwards things settle down nicely for a viewing experience that should draw few grumbles. Please note that as of this writing the disc mysteriously won't allow playback in a computer drive, so traditional frame grabs weren't possible yet here; instead the images seen here are shots directly from the Blu-ray playback on a 60-inch screen. The contrast levels and detail don't accurately reflect what you'd see in a frame grab, but at least this should convey 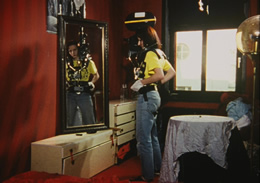 the vast improvements in color and overall clarity. Hopefully regular frame grabs will be slotted in here shortly. Also as usual there are two lossy Dolby Digital audio options, a standard stereo mix and a new 5.1 version with a very powerful presentation of the score in the front and rear channels. 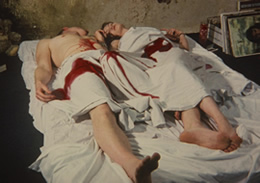 As for extras, there's also an audio commentary with the always articulate and wry Buttgereit, joined by co-writer Franz Rodenkirchen, who point out the backgrounds of most of the players (including what little they remember about the framing device dead guy) and go into detail about some of the tricky camera work they achieved with very little money. Buttgereit also provides a brief, optional HD intro to the film (basically explaining that its intent is definitely anti-suicide), and the 15-minute "The Making of Der Todesking" is essentially the behind-the-scenes segment from the main Buttgereit doc isolated by itself. Expect plenty of great footage here including a look at how they managed those bridge shots and lots of visual effects coverage, including how they pulled off that nasty bit of genital mutilation in the Nazi film within a film (perpetrated against Buttgereit himself, who plays multiple roles in the film). Also included is a lengthy gallery of promotional and making-of photos, trailers for all of Buttgereit's films (including this one, the two Nekromantiks, Schramm, and Hot Love) plus an HD one for Angst, and an option to play the entire soundtrack, which is otherwise quite difficult to find.