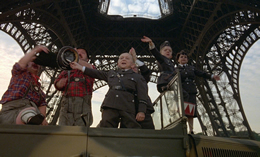 During the early days of the Nazis' rise to power in Germany, a young boy named Oskar (Bennett) with an unusually piercing mind decides that the adult world around him is so corrupt and sheepish that, to avoid ever becoming an adult like them, he deliberately wills himself to remain a three-year-old child forever, aided in part by a fall down some stairs. He also repeatedly plays his tin drum as a protest to the fascism and the public's acceptance of it growing around him 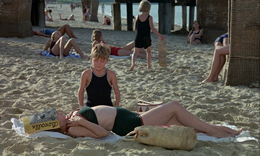 , and even stranger, he's also gifted with a scream so powerful it can shatter anything made of glass, be it spectacles or building windows. His family life originates from an unusual triad involving his mother Agnes (Engel), her husband Alfred (The Bird with the Crystal Plumage's Adorf), and her open lover/cousin, Jan (Olbryschski), an environment Oskar understands perfectly. Life over the years takes him from the German/Polish coexistence of Danzig through a country in tragic upheaval, where he tries to find a place to fit in a universe seemingly gone mad.

Based on an excellent novel by Günter Grass (sort of a German equivalent to Kurt Vonnegut), The Tin Drum has long been regarded as a landmark in world cinema and perhaps the greatest of all modern German films. It racked up an Oscar for Foreign Language Film and solidified the international status of director Volker Schlöndorff after his acclaimed The Lost Honor of Katarina Blum, all of which tends to obscure just how completely bizarre this film really is. 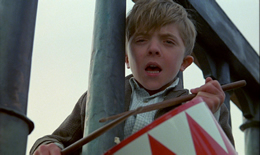 umption, and very European sexuality, some of which famously embroiled the film in a famous 1997 court case for obscenity in Oklahoma City (with all video copies taken out of circulation for about a year). This happened three years after a similarly famous (and equally idiotic) legal tempest in Ohio over Salò, though in context the volatile content (in which Oskar gets intimate with a young woman after a frolic on the beach) doesn't even come close to qualifying as exploitative. 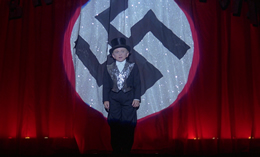 Of course, much of the success of this film rests on the shoulders of actor David Bennett, who was 12 at the time and delivers a remarkable performance taking him from birth to adulthood as conveyed solely through acting ability. He's a fascinating, alien, and sometimes terrifying protagonist, and certainly a performance for the ages. (He also went on to prominently appear in Ridley Scott's Legend, albeit with a creepy dubbed voice, as Honeythorn Gump.)

Perhaps the most surprising participant in The Tin Drum is its composer, Maurice Jarre, who had become a major name thanks to his work on David Lean films and had already dabbled in controversial Nazi-themed material with Visconti's The Damned a few years earlier. His score is actually very restrained, often sitting out entirely for long passages of the film only to return (sometimes as effective source m 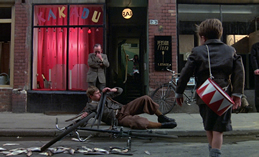 usic in a dance scene or at the circus) with a subliminal emotional punch, especially near the end.

Time constraints enforced by the original distributors forced Schlöndorff to turn in a final cut running 142 minutes. That version still plays just fine, but he long harbored a desire to restore a little over 20 minutes of scenes removed to keep the film at the demanded length. In a tactic similar to the one used for the extended restoration of The Good, the Bad, and the Ugly, the dialogue had be freshly recorded for the additional scenes when the time came to assemble the longer version. This meant bringing Bennett back into the studio to record his lines, with electronic wizardry used to return his voice back to that of a young boy. The extra scenes certainly deepen the film and give it a b 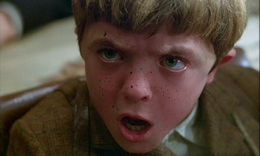 Criterion originally issued this film on DVD in 2004 in its theatrical cut along with a director's commentary, an isolated music score track, a smattering of the excised scenes in mediocre quality, a 21-minute director reminiscence, video interviews from the film's cast and crew promoting it at festivals including Cannes, the trailer, a sample of Glass reading from his novel, and the fascinating documentary Banned in Oklahoma about the U.S. court case. A British Blu-Ray and DVD edition from Arrow at the beginning of 2012 features the theatrical and director's cuts as well as the audio commentary and a smattering of the same video extras.

The Criterion Blu-Ray revisit from early 2013 not surprisingly offers a stellar HD rendering of the film, taken from the same source as the Arrow but with punchier colors and a bit more breathing room compression-wise since it doesn't cram both versions on the same disc. The DTS-HD 5.1 track created with the director's oversight isn't terribly active, remaining anchored primarily to the center with dialogue and a little ambient separation for the front speakers (and, very rarely, a bit for the rear ones). It still sounds very robust though and presumably reflects how he wanted the film to sound, while the optional English subtitles also appear to be accurate. Both the commentary and the censorship documentary disappear here in favor of mammoth 67-minute new interview with Schlöndorff, who walks through the film from the adaptation process through production and release to his reasons and methods for assembling his preferred cut. Film scholar Timothy Corrigan also contributes a new 20-minute appraisal of the film while making a case for its artistic importance, while the Glass reading, archival interviews, and trailer reappear here. The liner notes booklet (one of the slimmer in recent Criterion releases, oddly enough) contains a Geoffrey Macnab essay about the film (and especially the circumstances of revisiting it along with tackling some shocking revelations about the novel's author years after the fact) and a single-page 1978 excerpt from Glass about the adaptation process. Highly recommended.