The films of legendary director Fritz Lang became increasingly difficult to see after his return to Germany, following a succesful and varied career in Hollywood. In a sense this period found 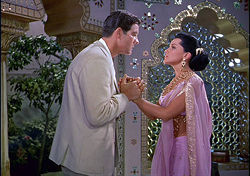 him reworking motifs and characters from his early days in pre-Nazi Germany, where he crafted such influential masterworks as Metropolis and The Testament of Dr. Mabuse. In his twilight years Lang turned out the fascinating 1,000 Eyes of Dr. Mabuse and, most surprisingly, a vividly colorful quasi-serial, the conjoined Tiger of Eschnapur and The Indian Tomb (which here bears the onscreen title Tomb of Love). Dubbed and hacked down into one rushed and ineffective feature by AIP (who chose the name of Journey to the Lost City to christen the bastardized results), these films have long remained a tantalizing footnote in most Lang scholarly studies, where few have actually seen these films and rumors of the unexpurgated versions remained a holy grail for many English-speaking viewers. Fortunately Lang's original works have survived intact and made their way to DVD in editions which would have 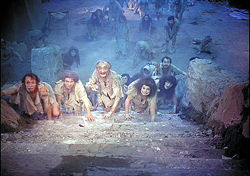 made their creator proud.

Works of intense narrative and visual skill, these films chart the adventures of good guy Harald Berger (Paul Hubschmid), an architect whose arrival in the mystical Indian province of Eschnapur opens his eyes to a wide new array of customs and personalities. Chief among these is the Maharaja (Walter Reyer), whose beautiful handmaiden and sacred dancer, half-white Seetha (an amusingly dubbed Debra Paget at her most ravishing), steals Harald's heart. Their romantic idylls trigger a chain reaction of political deceit, with the Maharahaja's scheming brother (Rene Deltgen) conspiring to steal the throne by hunting down the lovers and using them as evidence of the ruling power's corruption. Throw into this mix a series of elaborate religious ceremonies, a horde of scary and malnourished quasi-zombie denizens beneath the holy palace, a showdown in a pit with a hungry tiger, and a cliffhanger finale for Tiger which finds Harald and Seetha hounded into a desert storm, where they lie unconscious (but most likely not dead!). Tiger promises to tell of their further adventures in The Indian Tomb, which finds Harald's associate (Claus Holm) and sister Irene (Sabine Bethmann) drawn into the treacherous plot and roaming the vast, deadly caves of the holy city while Seetha is forced to perform one of the most eye-popping and sexually provocative dances filmed during the 1950s. 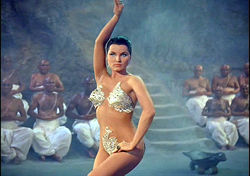 Lang contributed the screenplay to a silent 1921 version of The Indian Tomb (based upon the novel by his then-wife, Thea von Harbou, and directed by Joe May), which starred Conrad Veidt as the nefarious villain and featured a slightly different, more traditional structure. (This sprawling version is also available on DVD in a restored edition from Image courtesy of David Shepherd.) Now given the reigns as director, Lang indulges in a sumptuous array of locations shot in vivid color, with each camera set up providing a treat for the eyes. The cast also performs quite well once one gets over the shock of hearing German actors voicing all of the roles, regardless of the actors' nationalities. Paget - usually cast in prim and proper costume roles - really takes center stage here, making a vivid impression which takes hold even during the long stretches in the second film when she disappears. Even the potentially racist tactic of greasepainting German actors to portray Indian peasantry and royalty comes off better than expected, thanks to the sincere and convincing portrayals of everyone involved and the dynamic nature of Lang's location shooting. Whether filling the screen with marching elephants or billowing sandstorms, Lang's framing seems to soak in the atmosphere of a magical land about which most viewers can only dream. 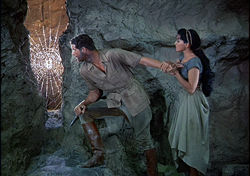 (For an interesting look at these films and their historical significance for Indian location shooting, check out this article at DVD Savant.)

Though VHS editions of the shortened U.S. version have circulated among the PD and gray market venues, Fantoma's DVD is the textbook definition of how much the digital format can offer to a vintage, neglected title. Derived from the original unmatted negatives, these transfers are absolutely beautiful to behold without any damage or visual compromises in sight (apart from some questionable technical glitches during the actual filming). The image is so razor sharp you can even see the wires holding up a tiger outfit during one crucial shot in the first film, and the colors have a deep, saturated quality which lifts this up with the best transfers of MGM musicals. Though not really known as a color visual stylist, Lang proves himself quite comfortable here with the possibilities of a wide chromatic palette at his disposal. Elegant and attractive menus offer the option of watching the films in dubbed English or the original German with optional English subtitles; while the latter still dubs Paget's voice, the dialogue is more often in sync with the actors and appears to be much truer to Lang's intent. The subtitles appear to be freshly translated, as they don't always quite match the dialogue of the dubbed track. The discs also contain fold-out liner notes by Tom Gunning, who offers a good thumbnail sketch of their production history and the status of Lang's career at the time.