Time has been mostly kind to Things to Come, H.G. Wells' speculative study of progress and conflict from 1936 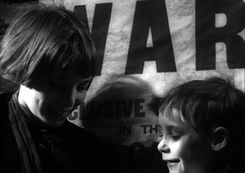 to 2036. Compressing his novel The Shape of Things to Come into a screenplay (which was later published), Wells begins his saga on Christmas Eve in "Everytown," which looks an awful lot like WWII London. The country braces for war which soon arrives full force, destroying entire city blocks, ripping the current political system to shreds, and leaving the citizens ravaged by plague. One of Everytown's citizens, a pilot named John Cabal (Raymond Massey), arrives a sadder and wiser man to confront the petulant Boss (Ralph Richardson), a dictator intent on conquering surrounding territories littered with postwar rubble. A revolution ensues to restore Everytown to the growing order of unified nations, but more conflict is yet to come as scientists and artists (represented by charismatic Cedric Hardwicke) feud over the possibility of sending man into space. 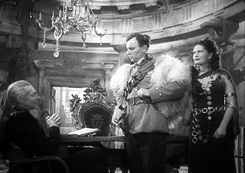 From a technical standpoint, Things to Come is assembled as masterfully as any science fiction film of its time. While other 1930s films viewed the future as a puffball creation filled with flying cars and worldwide peace (check out the justifiably ignored Just Imagine for contrast), Wells' vision focuses on both the darkness and light. The gothic wreckage of the middle act bears an uncanny resemblance to the works of much later visionaries like Ridley Scott (Blade Runner in particular) and Terry Gilliam (almost everything), though the industrial deco approach of the space age conclusion has yet to be duplicated. More difficult to warm up to is the film's reliance on preaching to the audience about the need for progress, though Wells readers will be more able to go along with these didactic passages. Massey in particular is saddled with some unwieldly dialogue, leaving Richardson to take top acting honors for his fascinating, complex, and frightening portrayal of a leader all too similar to the real ones which came to pass. Special mention must also be made of the score by Arthur Bliss, which manages to swerve from grandiose marches to quivering menace in the blink of an eye. 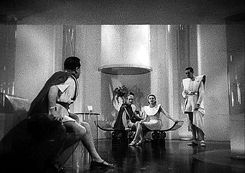 While Things to Come has never been a "lost" film per se, decent versions have been hard to come by. Video collectors have been forced to make do with horrendous public domain prints over the years, including a certain unmentionable DVD release during the format's infancy. Relatively speaking, the Wade Williams release from Image is a feast for the eyes, offering nice contrast (at last!) and crisp detail. Some print damage and fluttering is evident from time to time, not to mention a few nasty instances of warping during the last reel, but the presentation is still a revelation all the same. Even more welcome is the cleaned up soundtrack, which is smooth and always intelligible in marked contrast to the muffled noise of all prior video versions. While nothing has been trimmed out, the running time curiously clocks in at 93 minutes rather than the standard 97, indicating this may have originally been mastered in PAL. The disc also includes the original 1936 U.S. theatrical trailer, which is in watchable but unspectacular condition. For more information on this film, DVD Savant has written two interesting articles covering the film's political subtext (click here) and material trimmed out of the final cut (click here).