Since all-star murder mysteries and disaster films were all the rage during the late '70s, it was inevitable that

someone would turn to Agatha Christie's Miss Marple mysteries. After all, Murder on the Orient Express and Death on the Nile had been big hits for Christie's other major sleuth, Hercule Poirot, and Margaret Rutherford had previously pulled off a quartet of decidedly unfaithful but enjoyable Marple mysteries in the '50s. This time a disturbingly young Angela Lansbury was caked up in old lady makeup as the frail but brilliant amateur detective, but she definitely takes a back seat to the high voltage star power on display in the line up of suspects.

The tranquil village of St. 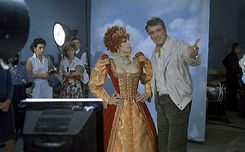 Mary Mead is sent into a tizzy when American director Jason Rudd (Rock Hudson) and his wife, Marina (Elizabeth Taylor), arrive to shoot a film about Mary, Queen of Scots. A welcome dinner party turns into a catty bitchfest when Marina's new co-star and rival, Lola Brewster (Kim Novak), shows up unexpectedly with her husband, producer Marty Fenn (Tony Curtis). As the fur flies, murder strikes unexpectedly when poor starstruck Heather Babcock (Maureen Bennett) drops dead from a poisoned daiquiri during the soiree. Evidence soon mounts indicating that someone could have an axe to grind with Marina, and it's up to Miss Marple to put the pieces together and dig up some nasty secrets from the past to unmask the murderer.

Though wildly uneven, The Mirror Crack'd (which takes its title from Tennyson's "The Lady of Shallott") offers some nice treats for mystery fans, particularly the delicious opening sequence, an homage to old dark house whodunits called Murder by Moonlight (featuring an appearance

by Story of O's Sir Stephen himself, Anthony Steel!). Naturally the film breaks just before the murderer is revealed, leaving audience member Miss Marple to fill in the blanks. From a mystery angle the plot is somewhat lacking, as it dispenses with much of Christie's more complex narrative and whittles down the number of suspects to virtually nothing. However, Taylor and Novak notch the camp value up through the roof, and you'll probably never see a cast like this assembled for such a "little" picture again. Director Guy Hamilton, better known for his work on several James Bond films, is obviously cruising on autopilot here but does a good job of keeping the pace going while the stars chomp hunks out of the scenery. The late, great Charles Gray also turns up as a butler, and the always reliable Edward Fox (The Cat and the Canary) puts in a good if underused turn as Miss Marple's nephew and fellow sleuth, Inspector Craddock. Keep your expectations low and enjoy.

Like most other EMI films, The Mirror Crack'd has passed through several hands over the years, beginning with a fuzzy full frame VHS transfer from Thorn/EMI. The same master was later used for a briefly available HBO/Image laserdisc, and the film since passed out of public hands for quite a while before returning to Republic via Canal Plus. Anchor Bay's version is by far the best looking of the bunch; while some of the photography has a deliberately misty veneer, the detail is much crisper than before. Colors also look just fine, and the 1.85:1 framing adds a bit to the sides while lopping off some excess headroom compared to the old transfer. The disc also contains a fun theatrical trailer, two TV spots ("You may not have liked her last film, but that's no reason to kill her!"), bios and filmographies for the major cast members, and a fold out booklet with an Agatha Christie primer.

Even if you've never seen this film or read the Agatha Christie novel on which it was based, the plot will seem very familiar. Ten strangers arrive at a large house on the mysterious Indian Island, invited by an unknown host. During dinner, a voice on a record album from their host, "Mr. Owen," accuses each of them of a murder of which they were never convicted. The house contains a sculpture and sheet music referring to a familiar nursery rhyme, "Ten Little Indians," which recounts the ghastly fates of ten Indian boys; soon the guests begin to die, one by one, through grisly and imaginative methods echoing each Indian death. The intelligent guests, including a judge and a doctor, deduce that the nefarious Mr. Owen is actually one of them, and so they must determine the killer's identity while attempting to stay alive.

One of Christie's most brilliant plot constructions, this tale began as a novel entitled Ten Little Niggers but was changed to Ten Little Indians in the U.S., for obvious reasons (in England the unfortunate racist term was not considered derogatory at the time). Christie soon translated her popular novel into a stage play, using the Ten Little Indians title and replacing the book's nihilistic finale (in which the killer's identity is revealed through a long expository note) with a more upbeat but no less clever resolution. The 1945 film adaptation uses the book's third, least familiar title, and remains one of the finest of all cinematic mysteries. Amazingly, this was remade no less than three times by Harry Alan Towers, with each version actually worse than the last as the setting changed from Switzerland to Iran to Africa. The tale's influence over the years cannot be overestimated; aside from obvious twists like Alien and Friday the 13th, even Mario Bava made no less than two variations on the story, Five Dolls for an August Moon and Bay of Blood. Despite the passing of time, the original film remains fresh and involving, thanks to the visually imaginative direction of Rene Clair (along with The Ghost Goes West and I Married a Witch, this was one of his few English-language efforts). Clair's avant garde background serves him well here as he deftly avoids becoming stagebound with all the characters puttering around the house. Clever touches like the judge's pool table demonstration of the murderer's plan and the recurring image of a cat playing with Judith Anderson's ball of yarn (which pays off with a terrific visual punchline) provide a fascinating cinematic counterpoint to Christie's witty, precise writing style (though the script includes several brilliant lines of its own). Clair also makes intelligent use of a moving camera and inventive manipulation of props (statuettes, keyholes, axes, knives). Despite the potentially morbid and creepy subject matter, the film remains balanced thanks to the pitch-perfect performances all around (Huston, Fitzgerald, and Anderson are astonishing) and a general atmopshere of jovial mystery. Not an easy task to pull off with lines like "He brought the axe down and split the cranium in half," but sure enough, it works.

Long out of circulation on both television and video, And Then There Were None made its long-awaited legitimate video debut a few years ago after the rights for the 20th Century Fox title passed over to VCI. The print is generally good, with only mild signs of wear and tear around the reel changes. The same transfer has been utilized for the DVD, and while it isn't as pristine as Criterion's black and white transfers, it's nevertheless an improvement over VHS and quite watchable. Besides, the film itself is so terrific (and underappreciated) that simply having it on DVD at all is something of a miracle. Don't let the drab cover turn you away; this is essential, shivery viewing.