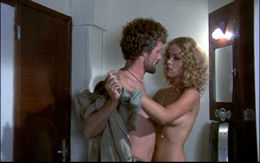 On an overnight train ride going out of the country, three unruly passengers -- David (The Cat o' Nine Tails' Pochath), Ernie (The Gates of Hell's De Mejo) and Philip (Hanna D.'s Lombardi) -- decide to rudely persecute the other travelers in the dining car. Among the potential victims are a pretty upper-class prostitute named Giulia (Dionisio) who gets clients sent to her room by the conductor, a cop (Maetri) transporting good-hearted felon Pierre (Burial Ground's Chirizzi) back to jail, a bickering and ailing elderly couple, and frustrated married woman Anna (New York Ripper's Kerova), who initially defends the trio's behavior only to get gang raped in a bathroom after flirting with Ernie. Soon the scumbags swipe the cop's firearm and have the trainload of passengers at their mercy, and who will survive by morning? 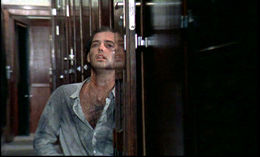 An utterly sleazy and entertaining slice of Italian trash from the country's seediest filmmaking period, Terror Express (released on DVD under its dual European titles of La ragazza del vagone letto and Horror-Sex Im Nachtexpress) features a surprisingly low amount of onscreen carnage but makes up for it in sheer depravity, a constant atmosphere of menace, and loads of graphic sex scenes accompanied by a grinding, catchy synth score by the infamous Marcello Giombini, best known for several Joe D'Amato films and The Beast in Space. Speaking of D'Amato, his most famous leading man, George Eastman, was the screenwriter for this film and would have been perfect as one of the three villains based on his wide-eyed turn in Rabid Dogs; why he stayed behind the camera this time out is anyone's guess. Much more surprising is the film's director, Ferdinando Baldi, who's better known for a string of spaghetti westerns (Blindman, Little Rita of the West, etc.) which culminated in two of the best-remembered '80s 3-D films, Comin' at Ya! and Treasure of the Four Crowns. This film certainly feels nothing like the rest of his output (which might explain why he shies away from graphic violence), but his affinity for onscreen skin reveals some talents evident nowhere else. The cast is a weird hodgepodge of familiar faces with onetime Ruggero Deodato girlfriend Silvia Dionisio (Muder Obsession, Waves of Lust) offering a somewhat chilly but attractive center for all the depraved activity. The three villains get to have most of the fun with the always unnerving Pochath (best known as the bloodsucking necrophile from Mosquito) adding another baddie to his roster. 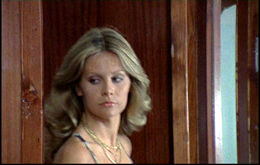 Though it received no attention whatsoever in America, Terror Express became a VHS mainstay in Europe and became entangled with the UK video nasty craze in the '80s along with the similar The Night Train Murders. The ridiculous English dub is nowhere to be found on the sole worldwide DVD release from Camera Obscura, but it's this is a rare film from the period to actually be shot in Italian so the omission isn't too damagin. The English subtitles are fine and definitely better than the dub (which may be good or bad depending on your viewpoint), with many character names also changing slightly in the translation (for example, "Peter" becomes "Pierre"). A German language option is also included with optional 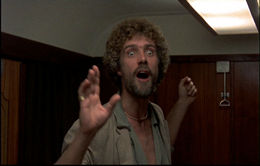 German subs for the Italian track. The transfer is completely uncut and looks very good for about 95% of the running time, a handful of shots (including that very, very long exterior view of the train leaving the station and the first scene after the credits) look much dupier and, according to a note before the film, had to be sourced from an inferior print since they were missing from the negative. In any case, it easily blows away any version that's ever been available before. Also included are the Italian and English trailers (with the latter giving you an idea of what the bad dub sounded like), a photo gallery of stills from various countries, a solid liner notes booklet by Christian Kessler in German and English, and easily best of all, a lengthy new featurette called "Tails from the Rails" that's one of the most candid, fascinating overviews of an Italian sleaze production since Grindhouse's Cannibal Ferox and Cannibal Holocaust. Eastman, De Mejo, and Kerova all appear for new discussions in which they offer wildly diverging recollections about the production; Eastman has the most knowledge as he explains the genesis of the film (a train car set happened to be available and could be redressed to make it look like a much bigger train) and reveals the inspiraton to the be the American film The Incident, though one has to wonder whether The Cassandra Crossing played a hand as well given some of the similar passengers. De Mejo talks about his early career (including appearing in Hair) up to this film (though he doesn't discuss his very graphic sex scenes in much detail or his later multiple collaborations with Lucio Fulci), while Kerova lets loose talking about her displeasure with the film, her disappointment working with Baldi, and which actors she got along with and which ones she definitely didn't. Highly entertaining all around and easily worth the purchase as much as the main feature itself.