Sporting one of the most astounding rosters of European acting talent ever assembled for a feature film, this methodical study of the psychological effects of military battle was the 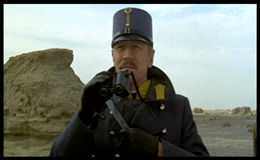 final film for director Valerio Zurlini, whose solid work was largely unseen outside of Europe (except for perhaps the stunning Alain Delon film, The Professor). Adept at handling both sumptuous visuals and emotional complexity, he was a natural fit for this challenging adaptation of the praised Dino Buzzati novel.

At the remote military 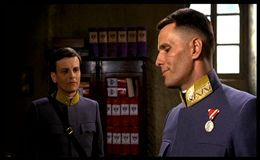 citadel of Fort Bastiani, Lieutenant Drago (co-producer Perrin, a regular from Jacques Demy films) arrives for his first major assignment only to find the men already in various states of mental disintegration. A sorrowful captain (Von Sydow) claims to have seen the enemy tartars years before, only to have them flee when he sounded the alarm; no one has seen them since, but the endless anticipation and tedium continue to exact a heavy toll. From a hard-driving major (spaghetti western star Gemma) to the jaded head doctor (Trintignant), each man seems to age beyond his years, a process which soon begins to eat away at Drago himself.

Though technically a war film, Desert of the Tartars owes more to the 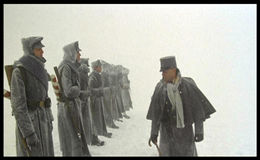 existential angst of Antonioni or Tarkovsky than any combat epic; here the emphasis is on the emotional violence of waiting without end, a concept later tackled with less maturity in the very similar Jarhead. From the top-notch cast to the lyrical Ennio Morricone score and wonderful cinematography by Luciano Tovoli (Suspiria, The Passenger), the film is a challenging but extremely worthwhile experience whose impact only really lands at the end. Anyone who can appreciate a studied, haunting portrayal of mankind's self-destructive tendencies will find it a trip well worth taking.

In keeping with their excellent track record, NoShame brings to film to DVD in high style with an excellent transfer. Colors are deliberately 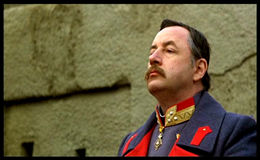 subdued for the most part (and why on earth wasn't this shot in scope?), while the mono Italian soundtrack with English subtitles gets the job done. (Most of the actors seem to be speaking in synch as well.) The biggest extra is a new 35-minute Tovoli interview, "Ghosts of the Desert" (35 minutes), in which he discusses the making of this film as well as his entire career, ranging from his first big job to his role in encouraging young people interested in the art of cinematography. Then Gemma turns up twice, first in the vintage 5-minute interview short, "The Most Important Role of My Life," and a new 6-minute recollection, "Memories from the Fortress," in which he shares numerous anecdotes about the director and his various co-stars. Music fans will especially get a kick out of the bonus second disc, a CD of Morricone's score to savor in all its stereo beauty.