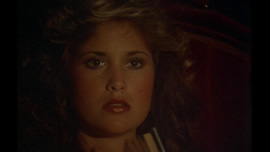 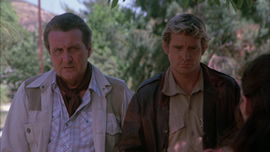 Released at the height of '80s slasher mania, Sweet Sixteen was passed off as another teens-n-terror outing and got lost in the avalanche of other copycat films. However, its one-of-a-kind cast of cult actors (some used far better than others) and bizarre narrative tangents earned it a respectable cult following, mainly among those willing to watch it more as an unorthodox murder mystery than a straight-up gorefest.

The story primarily revolves around pretty Melissa Morgan (Shirley), who's about to turn sixteen in a small Texas town brewing with tension between the hard-drinkin' white folks and nearby Indians. Her archaeologist dad (Macnee) is too busy rummaging around in Indian burial grounds to notice that guys who come near Melissa are starting to turn up knifed out in the desert, while her mom (Strasberg) is focused on planning the big sweet sixteen party. The local sheriff (Hopkins, of course) tries to piece together the facts and avoid a race riot after the son of the town's biggest barfly jackass (Stroud) gets slashed to death, and the sheriff's mystery-loving daughter (Kimmell) gets in the action by using her friendship with Melissa to do some snooping of her own. Melissa seems to be the obvious suspect, but naturally, there are a few surprises waiting in store.

This storyline sounds like your average TV movie-of-the-week thriller, but director Jim Sotos (whose only previous credit was the bizarre "mainstream" '76 remake of Forced Entry) assembles the film in a bizarre, almost non-linear fashion with scenes colliding against each other and actors appearing to improvise their way through conversations that often wander off into nowhere. As a slasher, the film only offers a handful of rote knife murders (shot so darkly you can barely tell what's going on); however, as a drive-in potpourri of sleaze elements 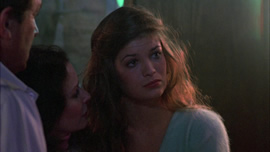 and overripe performances, it's hard to beat. The always entertaining Stroud wins the scenery-chewing award as he 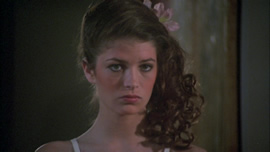 dials each line reading up to 11, but Kimmell (who got the lead in Friday the 13th Part 3-D on the basis of this film) delivers the weirdest performance as, presumably, a closeted lesbian Nancy Drew whose mood shifts from one second to the next. Ah, and of course there's a treacly theme song, "Melissa," which pops up at least three times for maximum comic relief. The double-twist ending (which cribs shamelessly from Alice, Sweet Alice) is lots of fun in a deranged sort of way, and the whole film moves along at a fast clip despite Sotos' inexplicable fondness for long, lab-created slow motion shots.

An independent film released in theaters by the short-lived "Century International," Sweet Sixteen became a regular VHS favorite from Vestron but eventually slipped off of shelves, popping up on DVD at first only in an awful grey market dupe of the Vestron transfer in one of Brentwood's PD party packs. Code Red's authorized DVD edition from 2010 proclaims a "director's cut" on the cover and actually offers two versions of the film, both clocking in at 87 minutes but containing some interesting differences. The director's cut kicks off with the "Melissa" song playing over black opening credits and segues into a slow pan of Melissa's bedroom, past some tarot cards and eventually ogling her fully naked in the shower. The theatrical cut instead starts with a sequence obviously shot after the main production with Kimmel having a gothic nightmare fantasy while reading one of her mystery novels, with a portion of the naked shower footage awkwardly shoehorned in slightly later in the film. Neither of the transfers are going to win any awards given the lackluster surviving materials for the film, but it's watchable enough. Both are featured in anamorphic transfers (which thankfully shear off lots of excess headroom compared to the open matte Vestron version), but the director's cut fares a bit better with a minimum of print damage. Fleshtones look a bit murky and smeary in some scenes, but again, this is all that survives. Theatrical prints are few and far between, and the one used here for the theatrical cut has certainly seen better days with some obvious signs of misuse over the years. Still, it's about the same as what you'd see at a drive-in, and that's good enough here unless someone manages to unearth the negative someday. The 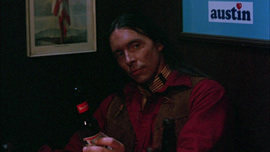 director's cut kicks off with a new, shot-on-video intro featuring Shirley and a very animated Scott Spiegel (director of Intruder) horsing around with a fake axe in his horror memorabilia playroom.

The main feature contains an audio commentary with Shirley, Sotos, and Spiegel covering the making of the film (presumably recorded to the theatrical cut given the obvious evident audio edits during the 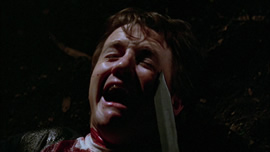 opening scenes), and both the actress and director are enthusiastic and warm in their memories of the famous cast members, Shirley's first-time acting nervousness, the shooting locations, and the challenges of putting the project together without studio financing. For some reason Spiegel's voice sounds warbled and distorted much of the time, but he also has some entertaining observations about a film he clearly admires and enjoys. Next up is a video featurette with a laid-back Hopkins talking about his own memories of the film and its colorful cast, including good buddy Stroud; he's then joined by Shirley and Sotos as they talk about the shoot, including a fun story about Shirley's slow-gestating friendship with the late Strasberg. Hopkins also freely admits he had to ad lib his incoherent, Psycho-style explanatory wrap-up in the last scene, which should come as a surprise to no one. Also included is the original trailer, a still gallery (mostly the pressbook), and trailers for other Code Red titles including Nightmare, Stunt Rock, the excellent Rituals, and, uh, The Balalaika Conspiracy.

In 2015, Code Red revisited the title as a slimmer Blu-ray release sold exclusively through Screen Archives. The theatrical version is included here (which may be just as well since it'll appeal more to horror fans) in much better condition than before, with the problematic, often oversaturated colors now looking for more natural and realistic while the dark scenes have lost much of their muddiness. The transfer appears to be close to raw without any clean up or any tinkering beyond standard color timing, so you'll still see some specks and scuffs here and there; however, it's still the best this has looked on home video by a very long shot. The DTS-HD MA audio reflects the original mono mix well enough given the fact that the film won't task anyone's home audio system. Only the interview with Hopkins and company has been carried over, in standard def as originally shot.