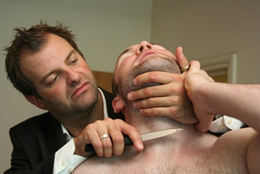 Eleven years after his hyper action-gore epic Sudden Fury, director Darren Ward returns to familiar turf with his follow-up feature film, A Day of Violence. While that previous effort owed a pleasant debt to the Italian cop and crime films of the 1980s, this one spins off in decidedly new territory comparable only to what might happen if someone remade Sexy Beast on crystal meth with a few dozen gallons of blood. The two leads from his short film "Nightmare," Nick Rendell and Tina Barnes, return here for the story of a tough guy thug named Mitchell Parker who winds up naked and dying on a slab thanks to a violent ambush after making love to his girlfriend, Abbie. How did he wind up here, and how can he survive through the final reel? Maybe his biggest mistake was pocketing a huge chunk of cash during a shady collection assignment, during which he's caught unaware on video while slicing a junkie's throat and making off with a sack of money. Mitchell decides to switch bosses, which doesn't go over too well and sets off a string of gory confrontations involving guns, knives, castration, and a well-employed chisel. 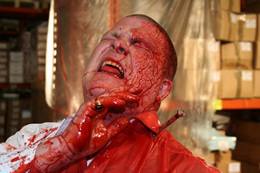 Boasting virtually no sympathetic characters and barely pausing to catch its breath after the opening credits, A Day of Violence (which seems like way too much for a 24-hour period, but who's counting?) is a rough, nasty, thoroughly entertaining piece of work and exactly the kind of thing studios would never want to touch now. Rendell manages to anchor the film quite well in the lead role, using his bulky and intimidating frame to good effect while pulling out some welcome moments of vulnerability and flat-out terror. Of course, it's also worth noting the small but pivotal role of Italian trash stalwart Giovanni Lombardo Radice, better known as the oft-abused John Morghen who underwent the most famous genital hacking of all time in Cannibal Ferox as well as City of the Living Dead's showstopping drill scene. Naturally he doesn't get out of this one intact either. While Ward's previous film had no qualms about showering the screen in torrents of plasma, the increased focus here on character development coupled with more sexuality gives it a different, more multi-dimensional flavor. It will definitely be interesting to see where he goes next after this one.

The screener provided for this film contained a watermark burn so it's impossible to do representative frame grabs, but overall it's quite nicely shot for a low-budget indie UK film and looks several steps up from the rough and ragged appearance of Sudden Fury (though that could have also been due to the dodgy compression on that film's DVD release). Hopefully a commercially viable release will come along to make this available with plenty of extras to put it in context, so keep your eyes out for this rough and tumble gem of brutality and nonstop cinematic chutzpah.

with a harrowing 11-minute short film, "Nightmares." Behind the generic title lurks the story of a tormented white-trash serial killer (Rendell) who talks to the camera and explains the traumatic visions of screaming apparitions, the remnants of his past victims, which remind him of his sister's murder and can only be silenced through torture and murder. Then the short film follows him as he chronicles the fates of his various victims,

still at large to seek another.

With an unnerving and aggressive soundtrack, striking blue-tinged nighttime photography, and tight pacing, this is another winner from Ward, capped off with the surprisingly high-profile music of Depeche Mode's "Walking in My Shoes" (whose nightmarish video already makes it an apropos choice). Though violent in content, the film is fairly restrained in terms of onscreen carnage, relying more on startling edits and sound effects. Even the protracted attack on one female victim is more harrowing for its mood than its graphic content, which is fleeting at best. In short, "Nightmares" is certainly an effective addition to the filmmaker's resume, making one hope he gets back behind the camera for another feature in the near future.

Available directly from the filmmaker, "Nightmares" comes with flat letterbox or 16:9 options (the latter automatically displays squeezed on a computer monitor, so prepare to adjust the size of your video player). Quality is excellent as expected, and the stereo audio is appropriately loud and guaranteed to upset the neighbors.

If Quentin Tarantino had done a remake of Lucio Fulci's Contraband as a straight to video project, the results would probably look a lot like Sudden Fury, an astonishing frenzy of gangster gore that's still one of the

most gruesome British projects ever filmed. In the opening scene, a crime deal gone wrong results in a back-talking sap getting his head stomped in by crime lord Randall (Murphy), whose henchman Jimmy (Andy Ranger) has a fondness for brutality. Things get worse when two of Randall's men wind up tortured by blowtorch under the hand of a wacko rival kingpin (Fulci regular David Warbeck), who transmits the whole ordeal by cell phone just for kicks. Hungry for payback, Randall hires loose canon hitman Walker (Rendell) for a seige gone very wrong, which results in Walker nearly being taken out by his employer. Soon the two men are out gunning for each other in a frenzied bloodbath, climaxing in a warehouse finale packed with burnings, maimings, and several thousand bullets.

Released one year before Guy Ritchie's Lock, Stock and Two Smoking Barrels (which coincidentally uses a lot of stylistic touches found here), Sudden Fury is way above your average low budget indie effort. The video format poses a few problems early on, thanks mainly to on-set sound recording that sounds a bit stilted and hollow at times, but once the action really kicks in, these shortcomings quickly fade away. The final half hour is a stunning tour de force, with a single-take, head-through-a-glass-door gag that will have many viewers reaching for the rewind button. The late Warbeck is fun and hammy in one of his final roles, while the other actors do well enough once you get over the fact that clean-cut, college-age English boys are a little implausible as hard-bitten, foul-mouthed drug lords and gangsters. Toss in some gratuitous sex and one of the best final shots you'll ever see, and you've got a great little underdog of a film well worth checking out.

The video transfers for Sudden Fury will never surpass the original source, obviously, so even with theatrical-style matting this still looks like a video production. Dropouts and video noise are evident in numerous shots, while contrast varies depending on the lighting. The technical quality improves as the film goes along, and the snappy editing goes a long way to compensating for the erratic video texture found in some of the dialogue scenes. The stereo audio is more consistent and impressive, with loud music, gunshots, and aggressive foley effects bursting from the speakers at an appropriately loud volume. The three DVD editions feature some of the same extras: a trailer, bloopers and brief deleted footage (including a nasty severed arm gag), and an art and photo gallery. The upcoming U.K. DVD also tosses in a short film, "Bitter Vengeance," and a preview for Beyond Fury, as well as a lengthy reel of behind the scenes make-up footage. Though lacking the make-up reel and short film, the German disc offers an audio commentary with Ward and Rendell, who explain the arduous, years-in-the-making process which resulted in this crimson-soaked labor of love. Regardless of the country of origin, this is a vicious ride well worth taking.