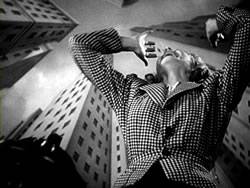 After witnessing a murder, newspaper journalist Mike (McGuire) becomes the prime witness for the prosecution against the presumed suspect, a taxi driver (Cook Jr.) who hysterically pleads his innocence. While with his girlfriend, Jane (Tallichet), who believes in the convicted man's innocence, Mike issues a casual threat against an irritating neighbor that might implicate him in another crime... and then there's the creepy-looking psychopath (Lorre) who keeps hanging around in the vicinity who might be more involved than Mike suspects. 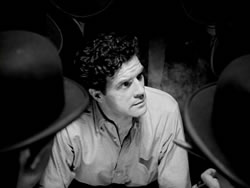 Lewton horror films, and gangster street dramas and smashed them together into one stylized, very influential package. It still holds up as a terrific film with some wonderful character bits, an effective score by Lewton and Hitchcock composer Roy Webb, and a knockout dream sequence as its centerpiece that plays like a paranoid surrealist short film. Top-billed Peter Lorre is really a limited but highly memorable supporting character with almost no dialogue; he had a few days left over on his RKO contract and was available, so he fit the bill as the sleazy-looking lurker who plays a pivotal role in the film's climax. Exactly how much of the end result qualifies as pure noir is a subject scholars will probably continue debating until the end of time, but if this is where the general consensus wants to trace the genre in American cinema, it's certainly a worthy choice as subsequent WWII-era classics and beyond would elaborate on many of the elements found here. 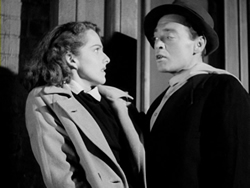 Beautifully shot on famously limited sets (only one is complete in the traditional sense), Stranger on the Third Floor has made the rounds on home video and TV in a similar pattern as its more famous RKO brethren: lots of afternoon cable airings, a VHS release from Turner during its ownership of the library, and so on. Unfortunately the DVD era was less kind, as the film was inexplicably passed over repeatedly by Warner as part of its terrific film noir box sets. Fans repeatedly hoped it would turn up in one volume after the next, but alas, it wasn't meant to be. A commercially pressed DVD is available in the UK from Odeon in a snappy-looking transfer that, apart from opening titles obviously grafted on from a slightly more worn print, easily blows away te old '80s-era master that's been available before. The dream sequence in particular looks great, with rich detail you couldn't possibly appreciate on TV. A manufactured-on-demand version is also available in America from the Warner Archive, whose remastered progressive transfer is culled from the same new source; you can't really go wrong with either, though as of this writing, the British option is considerably cheaper. (And for the love of God, don't even think about ordering the MOD version from Amazon in the US; the price they're asking should be criminal.)