In the early days of Italian exploitation films based on World War II fascist atrocities, filmmakers tried to inject at least some pretense of respectability into their efforts like The Night Porter and Salon Kitty thanks to lush sets and high-caliber stars to pass it all off as high drama. On the radical other end of the spectrum you also have directors like Sergio Garrone, who 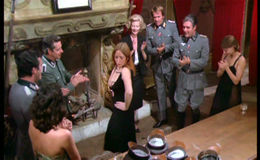 First up is SS Experiment Love Camp, where women are forced to adhere to the Nazi party or suffer the consequences, mostly involving immolation and electrochock treatment. One of the nicer Nazis (ahem), Helmut (Candido Erotico's Carven), is reluctantly willing to undertake experiments involving sex with prisoners (one of them gets to do it in a water-filled vat, but when he gets too emotionally involved, his superior officer, Col. von Kleiben (Cerioni), decides to take drastic measures by putting Helmut through a sneaky surgical operation, with uproarious results leading to a mad, gun-firing climax. Meanwhile a lesbian doctor (Melega) conducts her own experiments on female inmates (who plot their escape by sneaking goodies out of the 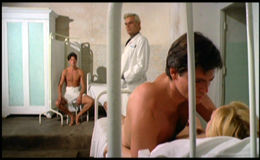 cabinets while getting undressed), as the SS officers entertain themselves with pretty girls dancing around red-schemed rooms.

Far too ludicrous to be taken seriously, SS Experiment Love Camp was a major player in the idiotic video nasty panic of the 1980s thanks to its perverse artwork; one can only wonder whether anyone at the BBFC really watched the actual film, which plays more like a John Waters film in SS uniforms. Though it offers no nutritional value whatsoever, the film does feature a couple of competent performances, with Carven making the most of a completely stupid character.

Though a bit less explicit than its predecessor, the following year's SS Camp: Women's Hell wins the award for sheer tastelessness by 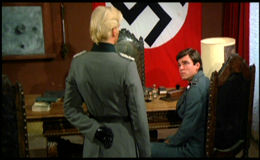 unspooling its main titles over a montage of Holocaust photos. After that it's business as usual, with a truckload of new female arrivals separated out between prostitutes for the soldiers and guinea pigs for the Nazi doctors' experiments. Dropping any semblance of a normal plot this time out, the film spends its time cutting back and forth between seedy softcore groping and surgical table horrors, a juxtaposition that would be 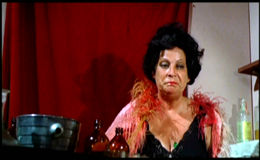 unbearable if it weren't for the scenery-chomping Cerioni, returning again as a mad SS officer. At least the graphic grace notes (pitchforkings, genital mutilation, etc.) from the first film aren't repeated here in such detail, so shaky newcomers to the genre might find this a better starting place.

Both films have had lengthy video histories around the world, usually in soft-looking, dupey VHS prints (a tradition carried over when SS Experiment Love Camp was briefly issued as a bootleg Substance DVD). Fortunately these Exploitation Digital editions from Media Blasters look about as good as one could expect; the transfers themselves look about as close to immaculate as one could expect from NTSC handling a zero-budget '70s Italian exploitation title, with vivid colors and perfect detail. Both films feature the English-dubbed dialogue, which is fine since both were shot silent and dubbed later in Italian, too. Garrone pops up on both discs for interviews, feeling quite proud of his work and secure in its moral validity within the motion picture community. Compared to stuff like Tomb Raider, he may have a point. Both DVDs also contain their respective theatrical trailers, still galleries, and trailers for the company's other Nazisploitation titles, such as the jaw-dropping SS Girls.