Billed as "an irresponsible film by Gregg Araki," this vitrolic first effort from the "formerly gay" maverick director remains his most consistent and memorable work. Effectively capturing the political rage of the gay community in the early 1990s, the film also works as sick entertainment thanks to some unexpected splashes of gore, hilariously nasty dialogue, and a handful of cult-friendly cameos including the always welcome Mary Woronov. 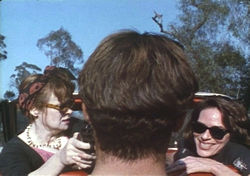 Morose over his positive HIV status, single guy and self-deprecating film critic Jon (Craig Gilmore) goes about his business in Los Angeles, while nearby, jaded hustler Luke (Mike Dytri) has the ultimate in bad days when he's nearly robbed by two lesbians, then his john (who enjoys being smacked on the butt with a tennis racket) gets hacked to death by his jealous wife. Teetering on the edge, Luke then unloads a pistol into a trio of gay bashers. Jon passes by and rescues Luke; the two hit it off immediately and become lovers on the lam, peppering their crime spree with socially conscious diabtribes against the White House (populated by the first Bush at the time) and other targets of the period. Occasionally Jon returns to reality for short periods by telephoning his best friend, Darcy, but he continues to follow Luke into an increasingly despairing and emotionally treacherous terrain which culminates in one of the decade's most startling, perverse and oddly touching final scenes. 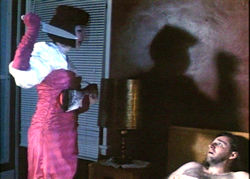 One of the earliest art house hits from indie label Strand Releasing, The Living End became a moderate film festival hit and kickstarted the bizarre but sadly limited career of Araki, who followed this with Totally F***ed Up before moving into more technically slick, celebrity-studded homages to his favorite directors. Even here the cinematic hat-tipping is more than a little obvious, especially when Luke violently blows away his potential assailants and the camera lingers on their bloody caps incribed with the names of other indie directors. Depending on each viewer's tolerance, the characters will either seem uncompromising, real and erotically charged, or insufferably whiny and self-absorbed; in any case the dialogue is always interesting and punches through to a few areas no other film dared to explore before or since. 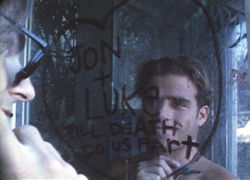 Shot on very grainy 16mm and blown up to 35mm for its theatrical engagements, The Living End has never looked very slick, to say the least. Its Warholian visual limitations are part of the charm, apparently, and the video transfer originally prepared by Academy in the mid-1990s captures every bit of grit and grime. That said, it's still colorful and sharp enough, and while the film never earned a laserdisc release, the same master was apparently recycled over for Platinum's DVD release. At least a notch or two above the VHS, the DVD looks suprisingly good for a budget label and, considering the amazingly low price tag it usually fetches, the disc should make fans very happy. The film's most striking aspect, its soundtrack, fares extremely well, and while the music mix may be a little loud for some tastes, Araki's carefully chosen songs from the likes of KMFDM, Coil, Babyland and Braindead Sound Machine contribute greatly to the film's aggressive, caustic, and ultimately unforgettable atmosphere.

Like all of the films directed by Gregg Araki, the alternative Valley Boy poster child, Splendor may be an acquired taste but offers a much safer introduction than his past two efforts, the vicious teen angst dramas Nowhere and The Doom Generation. Here he paints a sweeter, candy-colored three way romance purportedly derived from the '30s and '40s screwball comedies he admired in film school, though the results obviously wander far afield when set in the more sexually ambiguous '90s.

After a year-long dating dry spell, Veronica (Kathleen Robertson) finds herself involved with two men at the same time: Abel (Jonathan Schaech), an artsy writer type, and Zed (Matt Keeslar), a buffed, bleach blond drummer. The two men agree to let Veronica date them both, but after a drunken round of Truth or Dare, the three eventually wind up in bed together and decide to keep things that way. The financially irresponsible Abel and Zed move into Veronica's place, where they set up a cozy Three's Company arrangement that makes more sense emotionally than intellecutally. However, when

Veronica goes through a little biological crisis and takes off to Maui with a young TV director (Eric Mabius), the boys begin to realize their party for three may be coming to an end.

Much more tender and easygoing than the usual Araki film, Splendor still relies on hip, trendy young people in Almodover-style color coordinated settings, but the arch dialogue has thankfully been replaced by genuine acting and character development. Robertson easily steals the film from her deliberately bland male cohorts; potentially dangerous character traits ranging from her on-camera monologues to her rapid shifts in mood manage to work thanks almost entirely to her winning performance. Familiar indie faces Schaech, Keeslar (Last Days of Disco), and Mabius (Welcome to the Dollhouse) have little do besides serving as Robertson's objects of pleasure, but they make admirable comic foils all the same. For a screwball comedy, though, there isn't much obvious humor; the deception, identity confusion, and rapid dialogue which mark the best of the genre (e.g., Howard Hawks and Preston Sturges) are completely absent here. Instead, Splendor plays more like a dreamy rewrite of Truffaut's Jules and Jim with a couple of very soft love scenes tossed in for good measure. Araki's usual reliance on graphic, acidic dialogue takes a back seat here, and he even deftly sidesteps the issue of exactly what Abel and Zed do with each other when Veronica's not in bed. Compared to the seemingly endless, profane menages a trois in Doom Generation (also featuring Schaech), Splendor could almost pass for the work of an entirely different director.

Like Nowhere, this film was shot with a hard matte at 1.85:1 and requires the entire breadth of the frame to really work. Unlike the horrendous pan and scan VHS version, the DVD looks spacious and offers a wide, delicious palette of colors throughout. While the bright splashes of pink, green and blue could have been a technical nightmare during the transfer, they manage to come out just fine in this anamorphically enhanced presentation. The 5.1 sound mix is unspectacular but manages to showcase the tastefully chosen pop soundtrack, with a strong emphasis on light electronica. The red label U.S. trailer is also included with the usual talent profiles and trailers for two other Schaech titles, Hush and Finding Graceland. About as good a presentation as one could expect, this title should find a welcome home with any Araki fan and may win over a few new converts as well.