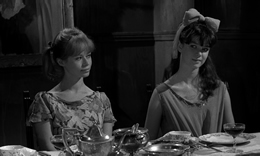 If only all directors could start out their careers this way! Boasting one of Lon Chaney, Jr.'s 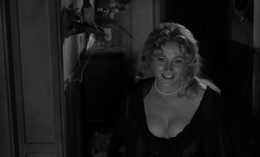 best performances (for which he reportedly stayed on the wagon for most of the filming) and a diabolical sense of humor, Spider Baby was virtually ignored upon its initial release but acquired a rabid cult following over the years thanks to television and home video. A theatrical reissue in the late '90s boosted its reputation considerably, and it became one of the hottest cult items in the early days of the DVD format with numerous subsequent editions adding their own little quirks.

Though superficially similar to some of Charles Addams' drawings, Spider Baby truly resembles nothing else in film. Chaney stars as Bruno, the family chauffeur for the Merrye clan. It seems the Merryes have been plagued for generations by "the Merrye syndrome," a degenerative condition of the mind and body which causes physical deformity and homicidal mania. The eldest son, Ralph (a hilarious Haig), teeters on the brink of being locked away with his older relatives who now reside out of sight in the family basement, while the younger daughters, Elizabeth (Washburn) and Virginia (Banner), a great and deeply unsettling comedy horror pair if there ever was one, take amusement in torturing and murdering the occasional visitor. Two distant relatives, Peter (Redeker) and Emily Howe (Ohmart), come to pay a visit with their family lawyer, Mr. Schlocker (Schanzer), and his secretary, Ann (Dementia 13 heroine Mitchel). When the visitors decide to stay for dinner, Ralph obliges by catching and preparing a cat for the main course, and while we wouldn't dream of giving away the title, let's just say the girls aren't too happy when Schlocker squashes a spider at the dinner table. 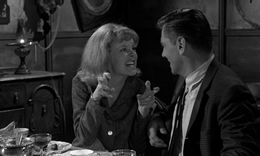 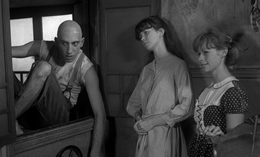 routine from House on Haunted Hill, albeit with less clothing here, and Chaney’s emotional post-dinner scene with the two girls proves once and for all that he was a fine actor in and out of makeup. The script includes a number of marvellous in-jokes for fans, particularly some funny riffs on The Wolf Man, and it really isn’t as depraved as a simple plot description might sound.

Image’s DVD released in 1999 essentially ported over their laserdisc with a little contrast tweaking; the 1.66:1 framing looks balanced and well chosen, and the level of detail is consistently impressive with little distortion or visual noise. The occasional scratch or scuff aside, it was a fine presentation for its time. Extras include footage of the film’s screening at the Nuart in L.A. attended by many of the cast and crew as well as laid-back and affectionate commentary by Hill himself. The director also discovered a longer answer print of the film containing an extended second reel in a warehouse, and the extra footage was included as a supplement on the disc. Presented fullscreen, the extended reel (eight minutes total, some of it also present in the final cut) contains several bits of footage snipped out to speed up the film. Some extra comedy between Bruno and Schlocker in the car, an earlier introduction to Ann’s character, and some chit chat on the 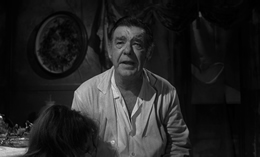 front porch in which Emily spies Ralph for a second time make up most of the extra running time, and while none of these bits add anything of narrative significance to the film, it’s nice to see them rescued from oblivion.

A subsequent DVD revisit from Dark Sky (carried over almost identically to an Australian release as well) sweetens the deal with a slicked-up anamorphic transfer (incorporating the excised footage to bring the running time up to 84 minutes from 81), a new commentary with Hill and Haig (covering most of the same ground but with a few little variations), a stills gallery, the alternate opening titles and an extended scene, and three featurettes: “The Hatching of Spider Baby” (including 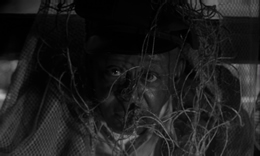 Joe Dante, Chris D., and most of the surviving cast and crew), “The Merrye House Revisited” (a location video with Hill going back to the house where the film was shot), and “Spider Stravinsky,” a welcome tribute to composer Ronald Stein, who also wrote the excellent scores for The Haunted Palace and The Premature Burial. His wife in particular gets the best anecdotes, including Stein's origins as a starving musician who got a discouraging letter from Alfred Newman and aggressively sought his first gig with Roger Corman.

However, the most impressive package by far is the 2013 Blu-ray from Arrow, a Region B UK release featuring an eye-popping transfer that easily sprints past its predecessors. (An SD counterpart is also included.) The black levels are much richer with far more detail now visible; it's a spectacular presentation all around. The mono audio is presented 2.0 LPCM, while the second Hill/Haig commentary is also included along with an isolated music and effects track. The three Dark Sky featurettes are carried over as well, along with an alternate main titles sequence (as Cannibal Orgy) and the original separated reel of extra reel two footage with a few bits dropped from the final cut. The theatrical trailer (which is newly assembled over the original audio) is also included along with a stills gallery and Hill's 1960 short film "The Host," which marked the director's first collaboration with Haig while he was at UCLA. (They also worked together on several later films including Pit Stop and Foxy Brown.) New to this set in HD is a 33-minute panel from the film's 2012 screening (alongside Carnival of Souls) in its new restoration from the camera negative at the first Academy Film to Film Festival, with Hill, Washburn, and Redeker chatting about the making of the film (and lamenting the early death of Banner due to a car accident in the '80s). The great Stephen R. Bissette also contributes a lengthy, appreciative liner notes essay about the film's history and influence, with an older 1997 interview piece with the principals about its making is also included in the booklet. Seen today, Spider Baby can easily be seen as a film ahead of its time; the morbid yet affectionate tone may have been too much for audiences at the time, but fortunately its pitch black humor has made it as durable as the Merrye curse.