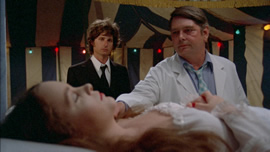 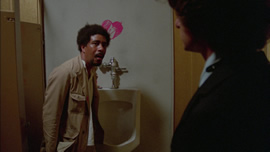 Practically tossed away by its distributor in the early '70s, this almost unclassifiable combination of fairy tale, art film, and psychosexual oddness has managed to earn a minor cult following over the years through word of mouth among aficionados of surreal cinema. This was the belated second film for James B. Harris, who got his start producing Stanley Kubrick films and directed the mainstream all-star sub thriller, The Bedford Incident. Here he took a major left turn with this deliberately paced, extremely haunting study of male romantic compulsion, which was met with a very divided reaction. Harris didn't direct again until the acclaimed James Woods drama Fast-Walking in '82, which put him back on more familiar turf.

Future softcore pioneer Zalman King stars here as Robert Troy, a jazz musician whose visit to a carnival finds him bewitched by a sideshow involving a real-life Sleeping Beauty named Jennifer (Zombie's Farrow), whom the barker (posing as a doctor) claims is incapable of awakening. Male spectators are allowed to pay a dollar for a chance to awaken her with a kiss, which of course turns out to be fruitless. Robert plunks down twenty grand to take her home for himself after being informed that her slumber is medically induced and soon to wear off. (Even more creepily, this seems to be a recurring pattern for the carny.) Coming back to reality, Jennifer finds herself acquiescing to Robert's role-playing lifestyle at the 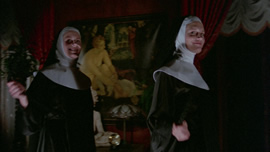 mansion he shares with his wealthy patron, Scarlett (British '60s staple White), who has a thing for performing in a nun's outfit with their "maid," Angelica (Anderson). Robert takes Jennifer to see him perform along with his jazz drummer buddy, an addict named Jeff (Pryor, who made The Mack and Hit! the same year), and he soon comes to find that reality has a nasty way of impinging on his attempts to build a kingdom with his potential princess. 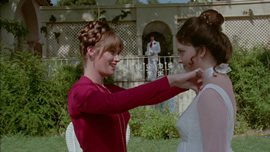 You definitely need to be on the right wavelength to appreciate his special little gem, which isn't quite exploitation but does take time out for an eye-popping nude cheerleading stage routine (by one-shot wonder Brandy Herred) that must be seen to be believed. The presence of Richard Pryor might also lead you to expect a satire of sorts, but it isn't that either. Instead the film hovers in a kind of hazy, spooky netherworld built entirely on wistful longing, and for once the shaggy-haired King (who would also go on to act in Blue Sunshine and Galaxy of Terror) is right in his element here with his puppy-eyed sadness suiting his character well. The real star of the film right off the bat is the gorgeous cinematography by Mario Tosi, who had just come off of Frogs(!) and would go on to other hazily-shot works of beauty like Carrie and The Stunt Man. Incidentally, the screenplay is based on a short story (entitled "Sleeping Beauty," a title this film also bore in some territories) by John Collier, the incredibly twisted soul whose jolting tales were earlier adapted by Alfred Hitchcock Presents and most notably as the terrifying "The Magic Shop" for The Alfred Hitchcock Hour.

Long out of circulation after its borderline unwatchable VHS release from Monterey in the '80s, Some Call It Loving features several scenes shot in moody darkness or boasting heavy amounts of diffusion. Those qualities were an understandable nightmare for telecine operators back in the day, but it fares much, much better here as the inaugural dual-format Blu-ray 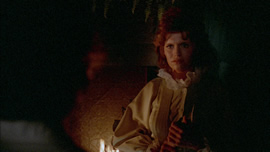 and DVD release from Etiquette Pictures, an offshoot of beloved exploitation savior Vinegar Syndrome. It's looks very lovely and film-like throughout with appropriate film grain levels, nice deep blacks, and some beautiful bursts of warm colors where they count. The sumptuous presentation also makes it easier to appreciate the film as a sort of cinematic cousin to titles as disparate as Night Tide, Venus in Furs, and Play It as It Lays. The DTS-HD MA mono audio sounds pristine as well, particularly during the film's 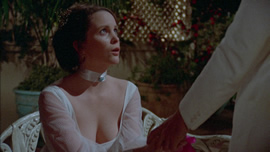 Harris appears for a very useful audio commentary track with moderator Sam Prime, covering the film's rocky early screenings (which necessitated the removal of almost 15 minutes of footage), his intentions with the storyline, the very diverse cast, and the short story's themes he was trying to accentuate with his passion project. The pair also return to provide commentary for a reel of that deleted and extended footage, which includes an interesting additional early bit with Robert carving a heart into a tree, some nice expanded bits in the mansion, and a lot more naked cheerleading. Harris also appears for a 7-minute featurette, "Some Call It History," in which he chats more about the cast, his production experience, and the film's warm reception in France compared to its chilly American fate. The 8-minute "A Dream So Real" features Tosi chatting about getting the job, finding that amazing castle along the Pacific Coast Highway, and bringing the film back to an enthusiastic audience in his native Italy. The package also comes with an insert featuring an idiosyncratic essay by Kevin John Bozelka, who call this "cinema's supreme miracle" and places it in thematic context at the height of elegant sexploitation films of the period. A beautiful little treasure that bodes well for the future of this fledgling label.