the Realm of the Senses, which this superficially resembles at times), but thanks to dunderheaded plotting and agonizing dialogue, the result comes crashing down within the opening minutes. Fortunately the results are still spectacularly entertaining, though perhaps not in the manner its creators intended.

Based on the radically different novel by Sean French, the story is told mostly in flashback by Alice (Heather Graham), a CD-Rom designer (yes, you read that correctly) telling police about her troubled relationship with Adam (Joseph Fiennes), a heroic mountain climber. A naive American adfrift in London, she first meets Adam at a city crosswalk and moments after is having passionate, anonymous sex in his apartment. After a second tryst, she dumps her devoted boyfriend and goes off to Adam's, which it turns out is really the residence of his sister and fellow climber, Deborah (Natasha McElhone). After spending an evening wandering in the snow, Alice finally tracks down her true love. Soon after her purse gets snatched on the street, and a stalking Adam chases the criminal down, smashes his face to ribbons against a glass telephone booth, and proposes marriage to Alice on the spot while the bloody robber twitches in agony at their feet. (Yes, this really happens.) 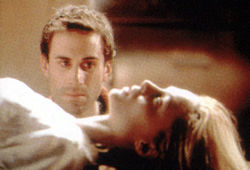 Of course she says yes, and despite a slew of anonymous letters warning her about the man she thinks she knows, Alice goes ahead with the ceremony. To celebrate their honeymoon, Adam drags her for a twelve-hour hike in the woods, leads her into a remote cabin, and forces her into a little sexual asphyxia thanks to some well-tied scarves around her throat. Things get even scarier when it turns out Adam's past girlfriends have a peculiar habit of disappearing, and Alice's amateur sleuthing reveals some nasty secrets about her beau's past.

Replete with symbolic references to oxygen loss (dying mountain climbers, a twitching goldfish, and so on), this pretentious stew of softcore sex and not-very-surprising whodunit mechanics leaps from one howler to another, including one jaw-dropper which finds Graham trussed up on a kitchen table while Fiennes scolds her for not trusting him. Soon after she's fleeing through the strangely empty streets of London in her undies, but the police refuse to offer much help because, after all, everything was consensual. And then there's the shovel-swinging climax in a foggy graveyard, a villain's "why I did it" speech that would seem farfetched even in an Italian giallo, and a sad, doe-eyed coda straight out of a Harlequin romance. Surprisingly, the sex scenes (which were trimmed somewhat in the R-rated U.S. DVD edition, but a separate unrated cut is also available) are pretty weak tea and barely cut it as cable fare; Graham's breasts and Fiennes' posterior get almost as much screen time as their faces, but for all of Graham's proud gushing to the press about the actors' refusal to wear crotch covers for their sex scenes, it's hilarious how Kaige's camera swoops and dodges to avoid glimpsing anything too unseemly. The aforementioned scarfing scene tries to outdo a similar bit in Basic Instinct, but the results are more humorous than titillating. At least Patrick Doyle's score offers a few nice Hitchcockian flourishes, but the lack of suspense onscreen results in a musical vacuum.

Co-financed with DeLaurentiis money, Killing Me Softly first hit DVD in an Italian edition with Italian or English audio tracks. The disc includes an Italian trailer, filmographies, and an exclusive 20-minute making-of featurette, including interviews with Fiennes, Graham, and Kaige. While technically uncut, the film frustratingly cuts to black about 30 seconds before the end of the film(!) while credits for the Italian dub roll over the sound of the action; stick with the British or American discs for the complete movie, though they're lighter on supplements. The anamorphic video quality is excellent, making the most of the very few occasions when Kaige indulges in visual flouishes such as Graham's colorful Oriental-style nightgowns. The very active 5.1 audio keeps the rear speakers busy for most of the running time, and the mountain climbing flashbacks are appropriately enveloping.