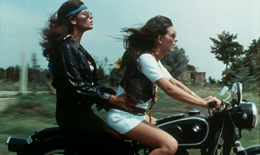 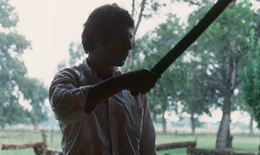 seen: Snuff, a brilliant example of marketing trumping substance unleashed in movie theaters in 1976 amidst a storm of press coverage and protests. At least part of that furor was actually engineered by the distributor, Allan Shackleton, head of Monarch Releasing Corporation and producer of films like Blue Summer. Shackleton had paid a few thousand dollars for a film called The Slaughter, set in Argentina and created by the legendary New York team of Michael and Roberta Findlay (both of whom appear on screen as well). The film was barely released with a shoddy post-synch soundtrack and something resembling a narrative; in fact, it had been shot about five years earlier in the wake of the Charles Manson massacre, designed to capitalize on the public fascination with cults, illicit murder, lawless hippies, and weird South American practices involving drug use and random murder.

For those who might be unaware, the urban legends involving snuff films purported that some sickos out there would film real killings for an underground paying audience. No evidence has ever turned up that snuff films in the genuine sense ever existed in any form, but much of the public confusion began when Slaughter was repurposed under the title Snuff, now sporting a new closing sequence in which the climactic attack of Slaughter suddenly pulls back to reveal the filmmakers at work. They decide to bring in a girl from the set to mutilate for real in front of the camera, apparently for the pleasure of the crew 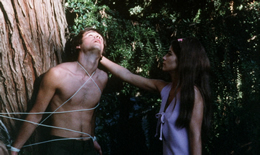 (and whoever is now filming them from multiple cameras). The gory but not particularly convincing punch line involving entrails and severed limbs was enough to spell box office gold, turning the concept of snuff films into a catchphrase that lingers to this day. Many other titles have since walked in this film's footsteps, some of them highly effective (Last House on Dead End Street, Cannibal Holocaust, Videodrome) and others significantly less so (8MM, Sidney Sheldon's Bloodline), not to mention a particularly stupid episode of Law and Order. 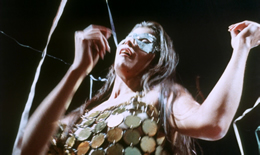 Exactly how Snuff came about has remained somewhat mysterious, thanks in no small part to the film's weird distribution history including a vague trailer ("the bloodiest thing that ever happened in front of a camera"), one low-key VHS release, and a DVD edition from Blue Underground that essentially paper bagged the film, depriving it of any credits or even a menu screen. The actual plot of Snuff is almost beside the point here, but for the record, it's about a charismatic cult leader named Satan (pronounced very amusingly here) who ropes in some hippie chicks and gets off on ordering things like switchblade knives slicing between people's toes. An actress named Terry London arrives nearby to shoot a film, and her boyfriend is also messing around on the side with one of the cult members, Angelica, who's fulfilling Satan's orders to keep tabs on the rich folk so they can be taken down. Terry's also sleeping with her director, Max, and the fact that she's pregnant gets the attention of Satan, who sees her offspring as part of his divine bloody destiny. Along the way we get random police scenes (in a rundown warehouse!), violent kink-filled flashbacks to Angelica's past, and other random nonsense like a trenchcoated cult member offing folks in an airport. 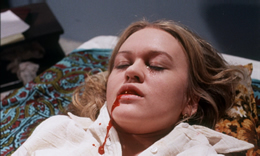 At first it's a little tough to peg this as the Findlays work, especially considering it's sandwiched in between Michael's stark monochrome period (ending with fare like Mnasidika) and his notorious switch to straight-up horror with Shriek of the Mutilated. That said, the murder scenes have that trademark Findlay nastiness (including a crazy bit involving a guy lashed to a tree and whipped by a cultist in leopard skin), the dialogue's as purple as can be, and fans will be delighted with the obligatory dancing sequence involving girls in masks, spangled outfits, and random stock footage cutaways to a carnival.

It was inevitable to someone would eventually step up to the plate and actually try to explain what Snuff actually is and how it came about, and thankfully the 2013 Blu-ray edition from Blue Underground (with a DVD reissue to match) fits the bill quite nicely. First of all, we finally have a new transfer here after decades of the same dreary one-inch tape master recycled for their old DVD release. It's much brighter, more colorful, and more detailed, with better 1.66:1 framing and only some mild film damage here and there (apparently in the original elements considering the newly added ending looks immaculate). The DTS-HD mono audio is, well, about as good as it could be considering the source material, and optional English subtitles are also included. However, the real meat lies in the video extras, with veteran adult filmmaker Carter Stevens going on record in the ten-minute "Shooting Snuff" about his work with Shackleton and how the reworking of the film came about, including its connection to Star Trek and the way the "terrible piece of crap" the Findlays made was smartly sold to the public. Director Nicolas Winding Refn (Drive) also pops up for a seven-minute appraisal of the film (as well as a hilarious intro to the main feature in which he links it to Jean-Luc Godard!), including a handy thumbnail sketch of how the film began and what it did to the public consciousness. (If you're new to the film, watch this featurette before the Stevens one.) He admits to loving the "rock and roll" mythology of it more than the experience of watching it, which sounds about right. Retired FBI agent Bill Kelly chips in as well with "Porn Buster," a five-minute piece about his own investigations into snuff films (which basically turned up zilch) and his memory of this film's release. Hilariously, it's shot with a low-res VHS camcorder. Finally the release closes out with the American and German trailers (American Cannibale), a gallery of international posters and stills, a "controversy gallery" covering the media frenzy, and Alexandra Heller-Nicholas' "Snuff: The Seventies and Beyond," an essay about the phenomenon's history from passing literary reference to indelible cultural boogeyman.