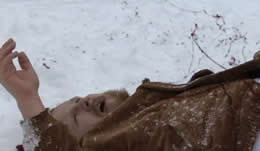 While trudging out in the snowy woods in February, 1999, the testy, goateed Professor Hoffman (O'Hear) and his crew stumble upon some bizarre creature tracks 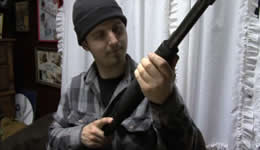 around a grotesquely mutilated deer and decide that "science should know" what's going on. They soon realize that some prehistoric, carnivorous creature has been unleashed from its icy tomb by a recent earthquake, and in no time everyone's being dragged to a bloody death in the snow by something with a giant fin. Cut to the present day at Christmas time, as a teen couple is similarly mauled by the same beast only to utter "snow shark" before passing on. The local mayor (Bozek, who sits around in his bathrobe at home with "World's Greatest Mayor" on his coffee mug) sends the sheriff (C.J. Qualiana) to deal with the angry townspeople, who think it might be a bear or pack of wolves. But redneck animal hunter Mike (director Sam Qualiana, also star of Porkchop II) dealt with this beast seven years before and crashes the town meeting, claiming he can catch the shark with his posse of wranglers. However, no one - not even naked hot tubbers or Santa Claus - is safe from the snow-dwelling monster fish.

Obviously a movie called Snow Shark isn't meant to be taken even remotely seriously; think of it as one of those ridiculous Roger Corman mutant movies like Crocowalrusaurus but filtered through a Troma sensibility, complete with atrocious 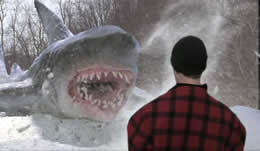 acting (deliberately, one would assume), silly effects (ranging from a giant foam shark head noshing on the cast to miniatures and CG fins skidding through the snow), and even some gratuitous T&A. As far as Jaws rip-offs/spoofs go, it's certainly one of the more entertaining ones in recent years and makes the most of its 79 minutes. There's even a ridiculous twist ending whos 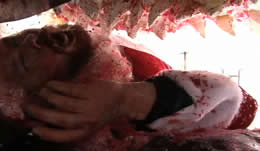 e scientific logistics will cause your head to explode... and a heavy metal theme song called "She's Gonna Eat You Alive," too.

Sam Qualiana also appears with O'Hear (who also assistant directed) and producer Greg Lamberson for an audio commentary in which they cover how the feature originated as a 2004 short film shot on VHS (also included on the DVD and definitely worth watching if you live SOV horror oddities), the logistics of mixing together various special effects with very little money, and the numerous genre nods throughout the film. Also included are two additional Qualiana shorts, "Something after Midnight" (a semi-humorous 22-minute zombie character study with several Snow Shark cast members) and "A Love Story" (an odd 10-minute black and white noir short story), plus six minutes of great outtakes (be sure to watch the shark hand puppet footage), the trailer (under the original longer title of Snow Shark: Ancient Snow Beast), bonus trailers (including both Porkchop films, Stiffed, and Zombie Allegiance), and a fun 24-minute behind-the-scenes featurette, focusing mainly on the effects scenes, some executed disorientingly on a white blanket atop bright green grass!