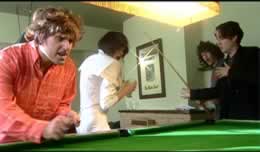 Before he caused an international splash with his terrific 2004 thriller Dead Man's Shoes and the acclaimed This Is England, director Shane Meadows cut his teeth on a string of small, quirky character studies starting in the late 1990s, such as A Room for Romeo Brass. However, his very first efforts were two short-form creations in 1996 which wound up being shown together theatrically, Small Time and Where's the Money Ronnie!, both of which also feature him in leading roles as well.

In the neighborhoods of Nottingham, a town still best known as the stomping grounds of Robin Hood, a different gang of thieves is at work in Small Time. Six lads led by Jumbo (Meadows) are all trying to balance their personal lives with their latest scams, all of which are only lucrative enough to keep them living from day to day. Much of the 71 minutes is devoted to alternating their little con (including a hilarious job involving dog food) under the turn-on-a-dime personality of Jumbo and the efforts of Malc (Hand) to wriggle out and establish his own identity with his girlfriend, Kate (Smiles). The performances are excellent, particularly given the largely improvised scenes which could have easily resulted in disaster, and Meadows keeps things moving at a very fast clip with lots of color and incident. This being his first project to clock in over an hour, he hadn't quite developed the visual chops of his mature films yet; indeed, you'll barely find a single interesting visual composition in the whole film, and the dime store wigs wouldn't cut it in an early John Waters film. However, the sheer panache and cleverness of the execution makes this a key component in British indie film and a solid indicator of things to come. 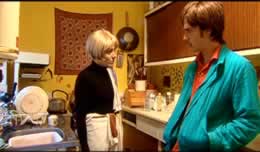 Small Time was completed after ten minutes of cut footage with funds from the BFI based on the merits of a previous short film, the same year's "Where's the Money Ronnie!" Again we're dealing with young thieves, an obvious British crime twist on Rashomon in which a quartet of criminals give their own accounts of a robbery that didn't quite go off as planned... or did it? 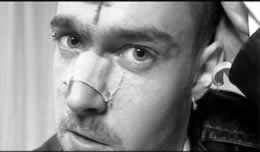 90% of the short consists of claustrophobic talking head shots, but it's to Meadows' credit that he still keeps the pace gripping and the B&W videography stark and impressive. Meadows and many of the same cast members reappear here, and for a brief piece with ridiculously ambitious narrative aspirations, it's amazing how well Meadows pulls it off.

The BFI release marks the DVD debut for these films, which feature the prominent disclaimer, "Both of these low-budget films were produced on analogue video and, as a result, exhibit a range of artefacts associated with the format. Every effort has been made to present the films in the highest quality possible." Thankfully any fears this might end up looking like a lower-end Sub Rosa product are unfounded, as they've done a very nice job of preserving two DIY gems in quality at the higher end of what looks roughly like standard def DV video. Don't expect anything spectacular, but both video and audio are surprisingly pleasing. The disc contains no extras apart from liner notes on the reverse side of the insert sleeve by Johnny Bugg, who spots some interesting and occasionally amusing cinematic allusions in both works.