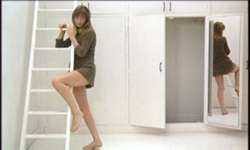 first onscreen pairing of Serge Gainsbourg and Jane Birkin, still regarded as France's first couple of pop music years after Serge's death. The two went on to scandalize the world with their orgasmic hit singles and worked together cinematically again both as an onscreen couple (including an unlikely giallo from Antonio Margheriti and the oddball crime film Cannabis) and with Serge directing her behind the camera, most outrageously in his rarely-seen ode to sodomy, Je t'aime moi non plus.

The plot of Slogan is so wispy it barely holds the film together, but for the record, Serge stars as, well, Serge, a chainsmoking commercial director with a pregnant wife at home. He's summoned to a big ad agency festival in Venice, and there he becomes entangled with Evelyne (Birkin), a young British girl visiting with her father (Murmer of the Heart's Gélin). Along the way the film indulges in numerous parties, travelogue scenes 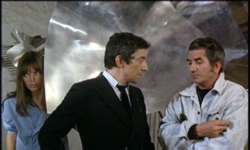 in Venice, and strangely hilarious commercial parodies before it all winds up, as all things in '60s France must, with a bittersweet ending.

Presumably modeled after the still-fresh success of 1966's hit French export A Man and a Woman, this film from Pierre Grimbalt (better known as a French TV producer) gets by almost completely on the chemistry between its leading actors, who were falling in love off camera as well. An unorthodox beauty previously seen as scantily-clad window dressing in films like Blow-Up and Wonderwall, Birkin makes the most of her role here with her broken French and slim physique, while Gainsbourg gives one of his most leisurely performances, drifting through Venice looking oh so deep and melancholy. It's all great fun if you're in the right mood, and the mod touches here and there just add to the fun. Of course, the film's other great asset is its Gainbourg-penned score, which 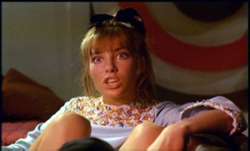 revolves entirely around two insanely catchy themes, the torchy "Slogan" (which also appears in a vocal version) and a sparkling secondary theme called "Evelyne," which accompanies a sexy improvished Birkin dance in one of the best scenes.

Considering this film has remained completely under the radar for over three decades, it's remarkable that anyone would think to revive it for DVD while the more familiar Cannabis remains MIA. Well, surprise, surprise; it's been unearthed by the fearless folks at Cult Epics, finally with optional English subtitles. The flat letterboxed (1.66:1) transfer is interlaced and was most likely taken from a PAL source, but it's fine for what it is; nothing too dazzling, but the color saturation looks decent enough, and it blows up well enough on 16x9 monitors if you feel so inclined. The only extra is the very sleek original French trailer, a nice bonus indeed. The back sleeve indicates this is suitable for "all ages," which it probably is, though a few dark, diffused glimpses of Birkin's bare derriere might make some more purtitanical parents raise their eyebrows. Then again, they probably wouldn't be out there buying Cult Epics titles in the first place.

In what must surely be one of the quickest and most startling double-dips in DVD history, a two-disc edition of Slogan followed a few months later. The first disc is the same, of course, while the second disc heaps on a surprisingly substantial heaping of material that became available after the nearly bare-bones version. "Pierre Lescure Interviews Jane Birkin and Pierre Grimblat" features half an hour with Birkin commenting on the director's Bardot obsession and describing her initial impressions of her co-star and future partner as "very Slavic, very sexy, disturbing and magnificent," among many other gems, all sprinkled with vintage interview clips, comic strip art and private photos from Birkin's collection. Grimblat and Lescure go at it again for another half-hour chat in which he talks about indoctrinating the introverted Gainsbourg into acting (with one terrifying surprise), intercut with some of Grimblat's commercial work. Then writer Frederic Beigbeder offers a 10-minute appraisal of the film and its importance in depicting the world of advertising and media manipulation, followed by five minutes of vinatge Gainsbourg/Birkin TV interviews about the film and a 12-minute sampling of Grimblat's '60s and '70s TV commercials, including some very quirky and often hilarious spots plugging boat cruises, cars, Colgate toothpaste, Palmolive, Shell, and much more. If you don't have the first DVD version, the deluxe one should be a no-brainer and comes highly recommended; for those considering an upgrade, let's just say that those with a taste for delicious '60s European pop culture should find their money well spent, while more casual fans might have a tougher decision awaiting them.