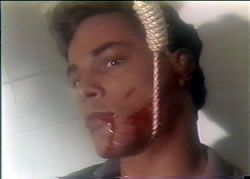 Back in the '80s, intrepid drive-in critic Joe Bob Briggs popularized the phrase "spam in a cabin" as a reference to that decade's fondness for horror movies featuring small groups of young adults off for a weekend in the middle of nowhere who get turned into mincemeat while partying at a remote cabin. The obvious champion of this formula is obviously Evil Dead, but plenty of slasher films got mileage out of this basic setup including the undying Friday the 13th franchise. On the much cheaper end of the scale, one of the earliest shot-on-video horror movies, Sledgehammer, epitomizes this term perfectly as it trots out seven party-hungry friends out to a country cabin where, as we see in the prologue, ten years earlier an adulterous couple was murdered with a sledgehammer while the female half's son was locked in a closet. This macabre story comes back into play when the revelers decide to use their handy recording equipment to throw an impromptu seance which turns their normally scheduled program of drinking beer, foot fights, and fornication upside down, and one by one they die horribly at the hands of a sledgehammer-wielding masked lunatic. 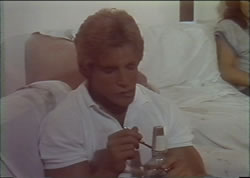 Shot on VHS by first-time, Alabama-based director David A. Prior (who went on to Killer Workout and a ton of action quickies), Sledgehammer is obviously compromised by its bargain basement look and VHS lensing; that said, it throws in some pretty decent twists via its semi-supernatural storyline and actually works up a few decent chills during the wild, often hallucinatory final half hour. While there's the obligatory T&A courtesy of some sexual shenanigans (including one amusingly blocked nude scene in what is obviously someone's emptied-out apartment bedroom), the film gains some points for originality by inexplicably depriving its hero, Chuck (played by the director's brother and most frequent star, Ted, a Playgirl model), of his shirt at regular intervals throughout the film, even during his climactic showdown with the killer. The obligatory relationship subplots between the characters are mostly filler, especially the strain between Chuck and his girlfriend, Joni (McGill), over reluctance to plan a wedding, but it's at least a reasonable stab at development in a genre not exactly known for emotional depth. Its modest merits are even more noteworthy when you consider that this was really the first of its kind, a straight-up slasher for the burgeoning video rental market before other attempts like The Ripper came along later; eventually it turned into a minor cottage industry for indie video labels that continues to this day, with countless aspiring filmmakers armed with consumer HD cameras trotting out their friends for a weekend of blood-spattered filmmaking. If you want to see a good example of how it all got started, look no further. 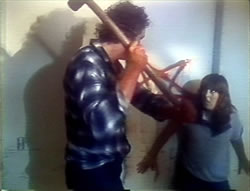 An extremely rare title on VHS after its initial release on World Video, Sledgehammer comes to DVD in surprisingly lavish style courtesy of Intervision's DVD, a considerable step up in presentation after their pair of oddball Jess Franco releases. It still only looks as good as the original tape source will allow, which means it's still a smeary, tape-noise-riddled, glowingly retro experience that will make anyone who appreciates some lo-fi gore beam with admiration. The disc (which initially kicks off with a very gory trailer for another lost '80s VHS slasher relic, Things) includes two audio commentaries, the first with the director and moderator Clint Kelly of Riot Releasing who talk about shooting the whole thing in Prior's very white apartment in about a week, some mishaps with blood-covered actors hanging around outside during their breaks, and the frequent dollops of slow motion. Prior downplays some of the deeper artistic readings offered during the chat, mostly focusing on the nuts and bolts of filming and talking about what a complete mess they all made of the shooting location. Next up is a second commentary with Bleeding Skull's Joseph A. Ziemba and Dan Budnik (recorded at a much lower volume somewhere in Van Nuys, California), who take a much less scholarly approach as they offer an enthusiastic, laid back appraisal of the film which they've obviously watched way more times than what could be considered humanly healthy. They point out a lot of amusing little details in the film and thankfully never talk down to the subject at hand; their joy in the whole enterprise is surprisingly infectious, making this a more essential track than the usual fan contributions. Other extras include a five-minute video interview with David Prior (who offers more of a general thumbnail sketch of the film and his career than the commentary while sitting in a sunny family park), an eight-minute "Hammertime" featurette with Destroy All Movies!!' Zack Carlson (sitting in front of a fantastic assortment of vintage VHS tapes), and the six-minute "Sledgehammerland" with The Cinefamily's Hadrian Belove and Tom Fitzgerald hilariously keyed into scenes from the film as they talk about their once-in-a-lifetime theatrical screening of the film in 2008 after an all-night Halloween bash in the theater. Additional trailers for The Secret Life: Jeffrey Dahmer and the wonderfully cracked A Night to Dismember wrap up a thoroughly admirable release that's going to make a lot of twisted horror collectors very, very happy.