If the politically-conscious paranoia thrillers of the 1970s slammed head-first into a lurid Amicus horror anthology on a homegrown budget, 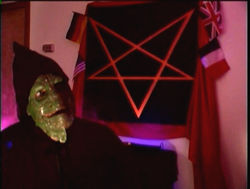 the result would probably be The Sins of Government, another take-no-prisoners DIY outing from Ron Atkins, the genial lunatic behind Schizophreniac and Eat the Rich. Basically two short films linked by a sinister host (Aten), the film delves into the shadowy world of the Illuminati, a secret organization whose history spans back centuries throughout Europe. A favorite topic of conspiracy theorists, the sect is rather literally portrayed here as a group of evil lizard people, led by the robed Pindar (Brodie), intent on world control through mind manipulation, intimidation, and general social misbehavior. The first half, "Rites of the Illuminati," follows ambitious Bill Clayton (King) as he conspires to become a governor 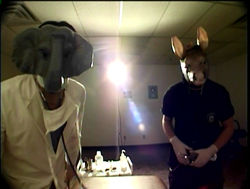 but gets cold feet when the lizard-people demand his spouse as part of the bargain. Naturally, all does not go well. Next up is "Ultra," in which Christine (Teal) is honed into a mindless killer after undergoing brutal sexual mistreatment and brainwashing. Is it all fantasy... or could this be real?

Clearly wearing its political intentions on its sleeve, The Sins of Government assaults the viewer with candy-colored lighting, ranting Bush family members (thanks to handy rubber masks), and the aforementioned lizard leaders; as the opening text proclaims, "It's only a movie," which should keep any shadowy reptilians from knocking on the participants' doors in the middle of the night. As a paranoid horror film this is a logical step forward from Atkins' Eat the Rich, packed with grisy details and sexual torment beneath a gloss of political rage. Not for all tastes, to be sure, but it's a refreshingly bile-driven alternative to the overabundance of cheap-o political documentaries currently cluttering the marketplace. However, it's not quite as scary as what you get by typing "Illuminati" and "Bush" into the search engine of your choice.

Shot on video in a series of spare, claustrophobic rooms, The Sins of Government looks about as good as could be expected on DVD. Colors are vivid, but the limitations of the videography result in some detail loss during darker scenes. The stereo audio, mostly recorded right from the set, is serviceable enough, but don't expect a slick mix here. The current disc features no extras, but given Cutthroat's track record, a feature-laden version might not be out of the question.