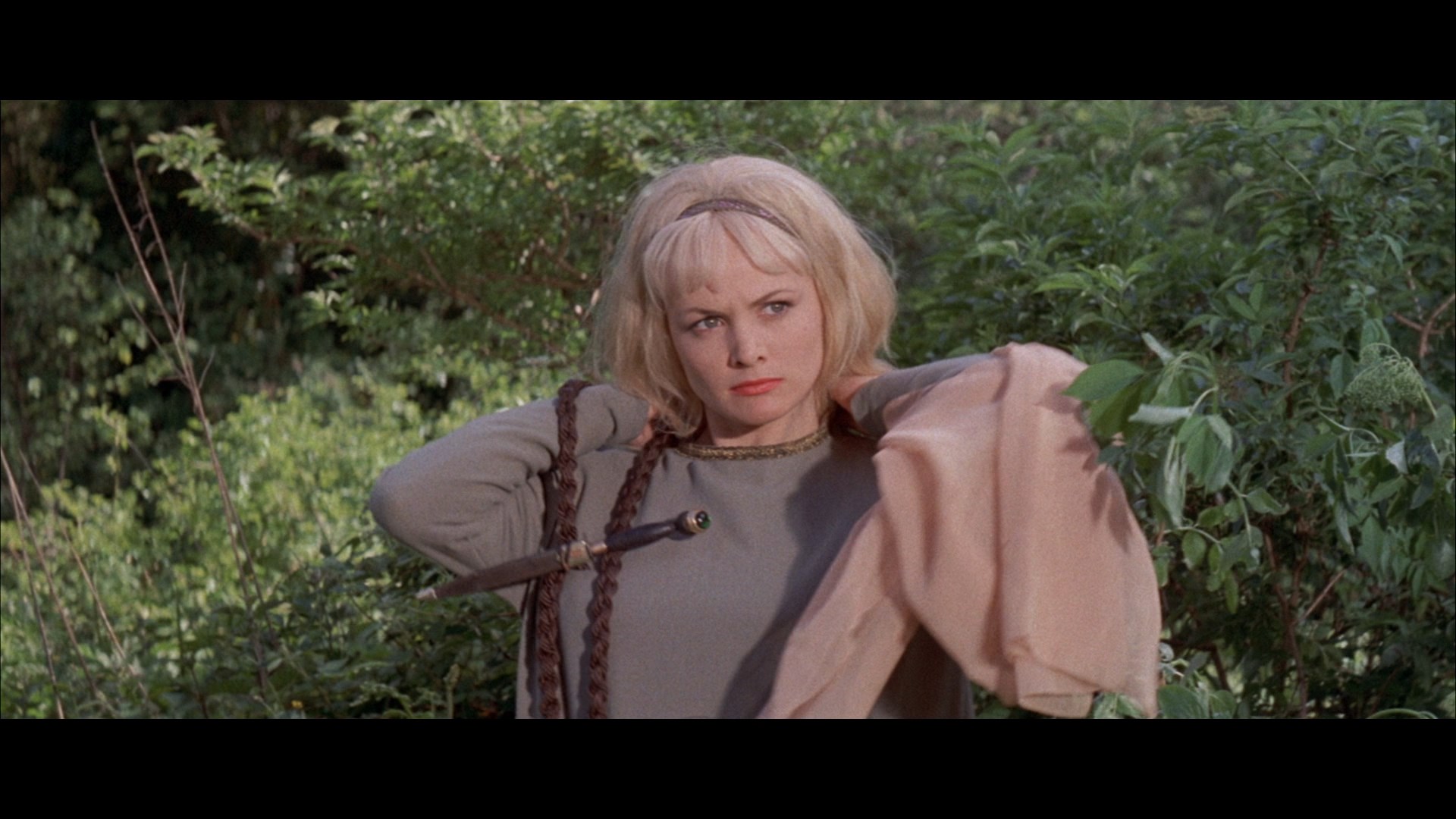 was becoming best known globally for its vibrant horror films by the early '60s, it was still 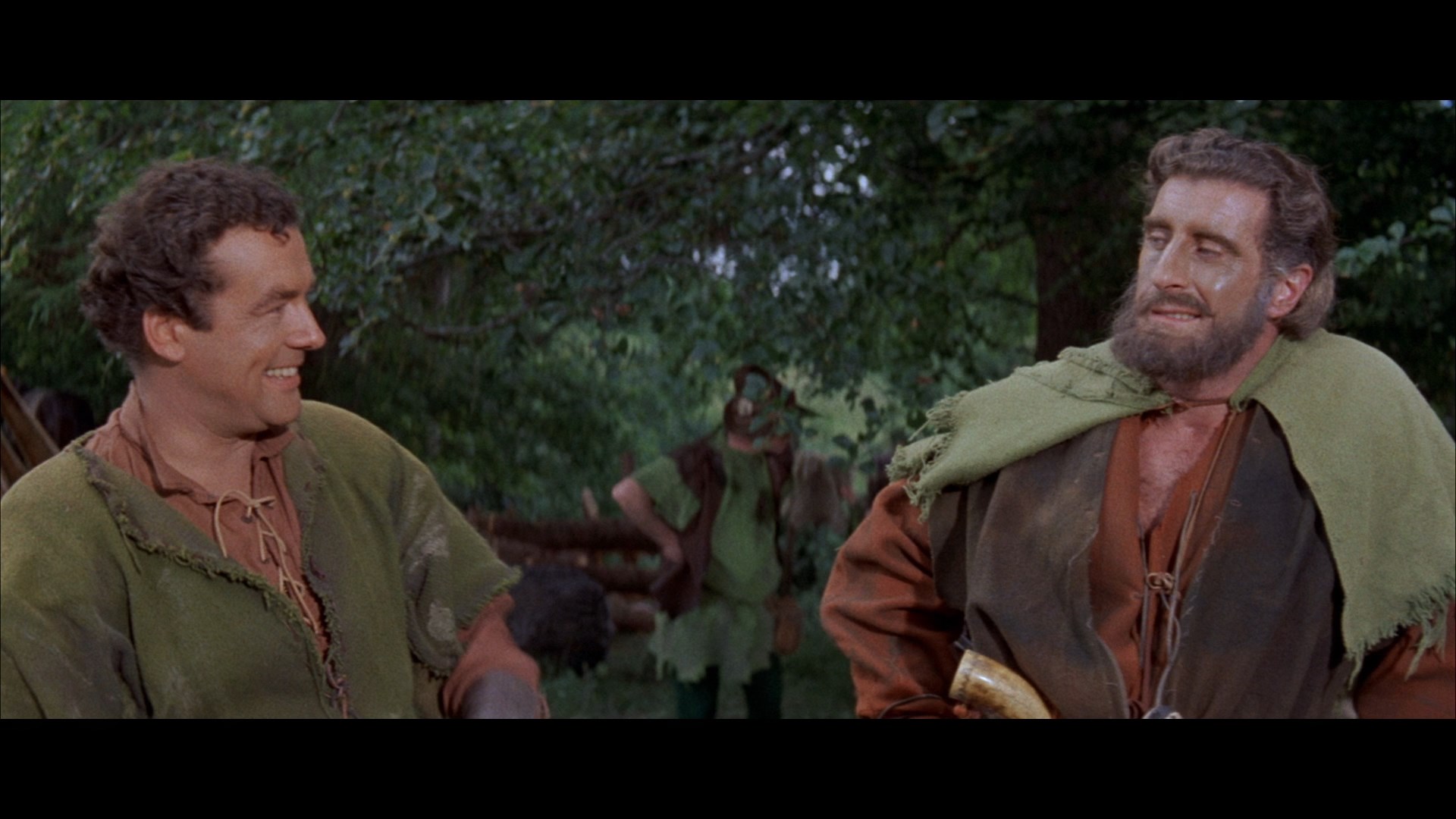 going full steam ahead in other genres. Adventure films were a particular mainstay, and in 1960 the studio made the interesting decision to mount Sword of Sherwood Forest starring Richard Greene, who had just been playing Robin Hood on British TV since 1955 in the series The Adventures of Robin Hood. Otherwise Hammer stacked this one with a new cast, shot it in the proprietary MegaScope process (which retained the obvious stretching effect from early CinemaScope), and retained one of its most accomplished directors, Terence Fisher (who had done a handful of the TV episodes). However, the real ace up its sleeve was the casting of the legendary Peter Cushing as the Sheriff of Nottingham, enough to ensure this a place in fans' hearts. In 1967, Hammer revisited the material for the far lower-wattage A Challenge for Robin Hood, which plays like kind of a prequel and compensates with plenty of action and lush scenery. Both films have been gathered on U.K. Blu-ray from Indicator in a limited 5,000-unit set, Robin Hood at Hammer, another treat for Hammer fans showing off both of these films in their best presentations to date.

First up in Sword of Sherwood Forest, medieval intrigue is brewing when the Archbishop of Canterbury (Gwillim) becomes a target by the conniving Sheriff of Nottingham after opposing schemes to plunder estates left vacant by the Crusades. Robin Hood (Greene) and his Merry Men including Little John (Green) and Friar Tuck (Night of the Demon's MacGinnis) become pawns in the local intrigue, with Maid Marian (Branch) unaware of the Sheriff's manipulative nature.

Being unshackled from the constraints of television is an obvious draw here, from the widescreen 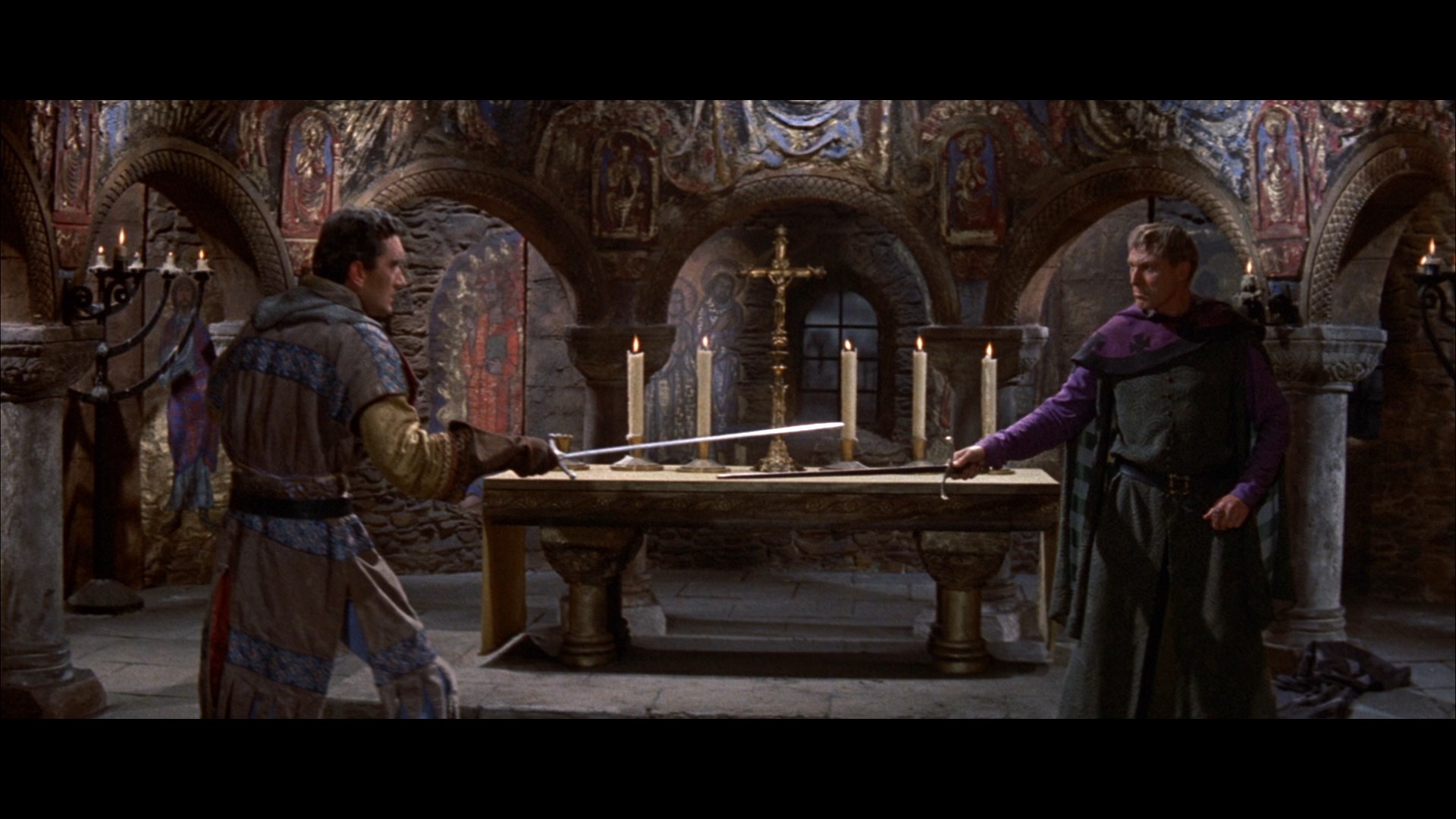 photography to the fact that this opens with a very 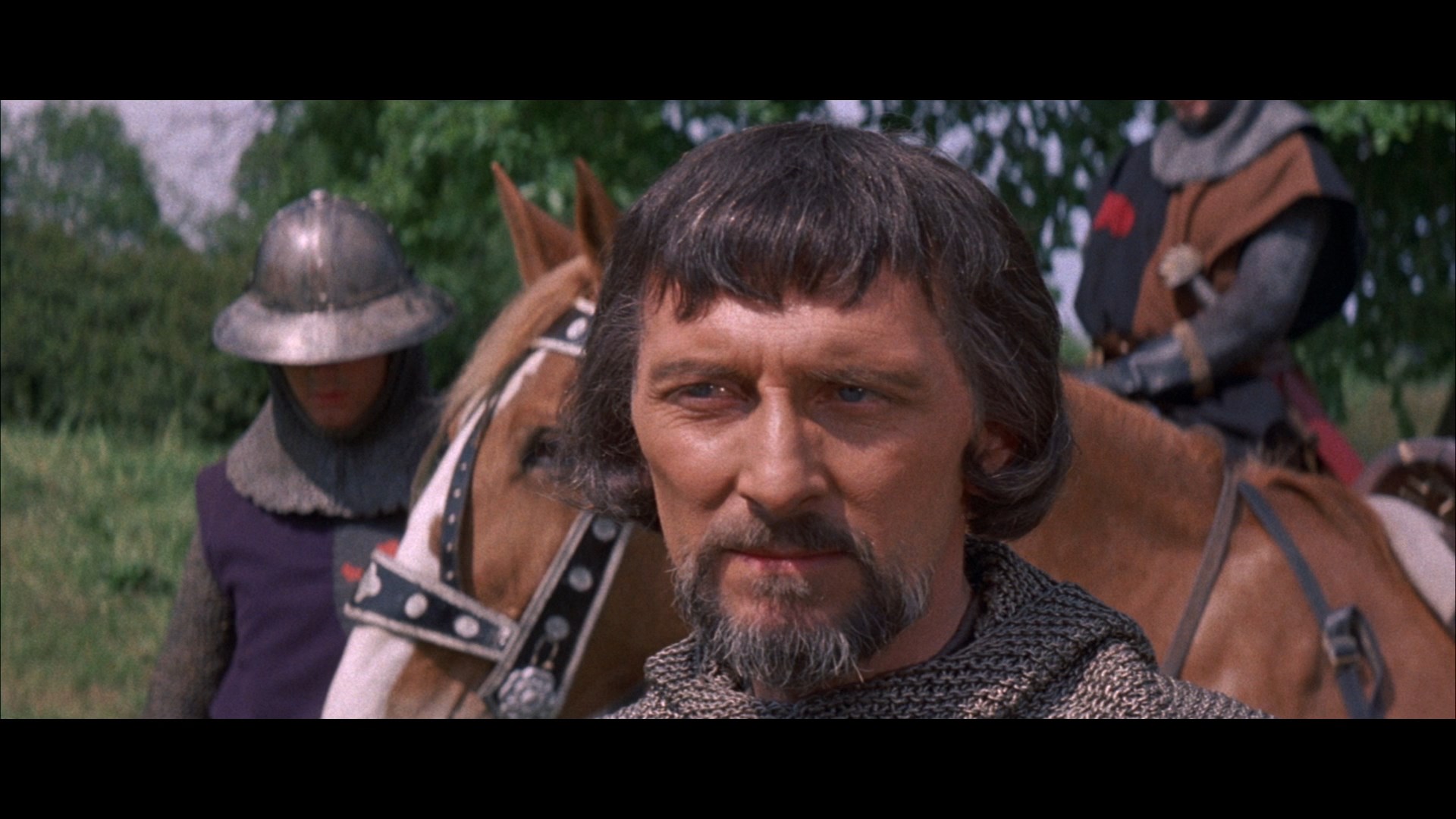 platinum blonde, early '60s Maid Marian skinnydipping in a forest lake when she first meets Robin and assumes he's a murderous gang leader. As you can probably guess from the title, the usual archery angle is downplayed here in favor of swordplay, likely influenced by the legendary finale of the 1938 Errol Flynn classic. A veteran actor since the '30s, Greene is fine in the role (as he'd already proven on TV) but doesn't really have the magnetism needed to play a big screen swashbuckler; after this his main highlights were playing Nayland Smith in Jess Franco's two Fu Manchu films and suffering a memorably nasty fate in the 1972 Amicus classic, Tales from the Crypt. Hammer fans will also get a kick out of a quick early appearance by Oliver Reed, who would headline several classic films for them in the near future.

Issued on DVD a couple of times by Sony, Sword of Sherwood Forest first arrived on Blu-ray in 2019 from Twilight Time in a sparse edition featuring a nice Sony-supplied HD master, the trailer, and an isolated music and effects track. The Indicator is a huge improvement all around, again using Sony's master with a fine LPCM 1.0 mono track here with improved SDH English subtitles. An unsurprisingly excellent and informative commentary by the reliable team of Barry Forshaw and Kim Newman covers the history of Robin Hood at Hammer (which also encompasses two other, lesser known titles, all unrelated), Fisher's directorial style including his more extensive use of locations here, Cushing's career at the time, comparisons to the TV show, and more. Also playable with the film is a 76-minute Fisher audio interview from 1967; the audio quality's rough but it's a great document of his time at Hammer as he looks back at his career from his first interest in film through the highlights of his career. Finally the film can also be run with an 80-minute British Entertainment History Project interview with producer, editor, and writer Sidney Cole from 1987, conducted by Alan Lawson, Arthur Graham, and Rodney Giesler, touching on everything from the early days of British film exhibition to working on They Came to a City and Alfred Hitchcock's Jamaica Inn to the industry spasms from Ealing's shutdown. A 1981 episode of the series Play It Again (22m59s) with Tony Bilbow features Greene chatting about his time in Hollywood, live TV, and British cinema, as well as his own movie idols. In "Merry Memories" (3m52s), actor Dennis Lotis briefly recalls his time on the film and working with Greene, while "All in a Quiver" (6m15s) has continuity supervisor Pauline Wise chatting about her first major job getting into Hammer and being assigned to this project. In "Riding Through the Glen" (28m48s), Jonathan Rigby provides a thorough account of this film's production, its status as Hammer's second shot at the material after Men of Sherwood Forest (its first color release), and its status among the numerous other Hammer titles in various stages of production at the time. "A Hero's Fanfare" (22m40s) is another deep dive into Hammer films score from David Huckvale, this time analyzing the romantic approach of Alun Hoddinott’s score. The trailer and the isolated music and effects track turn up here as well, along with a gallery of 64 images. 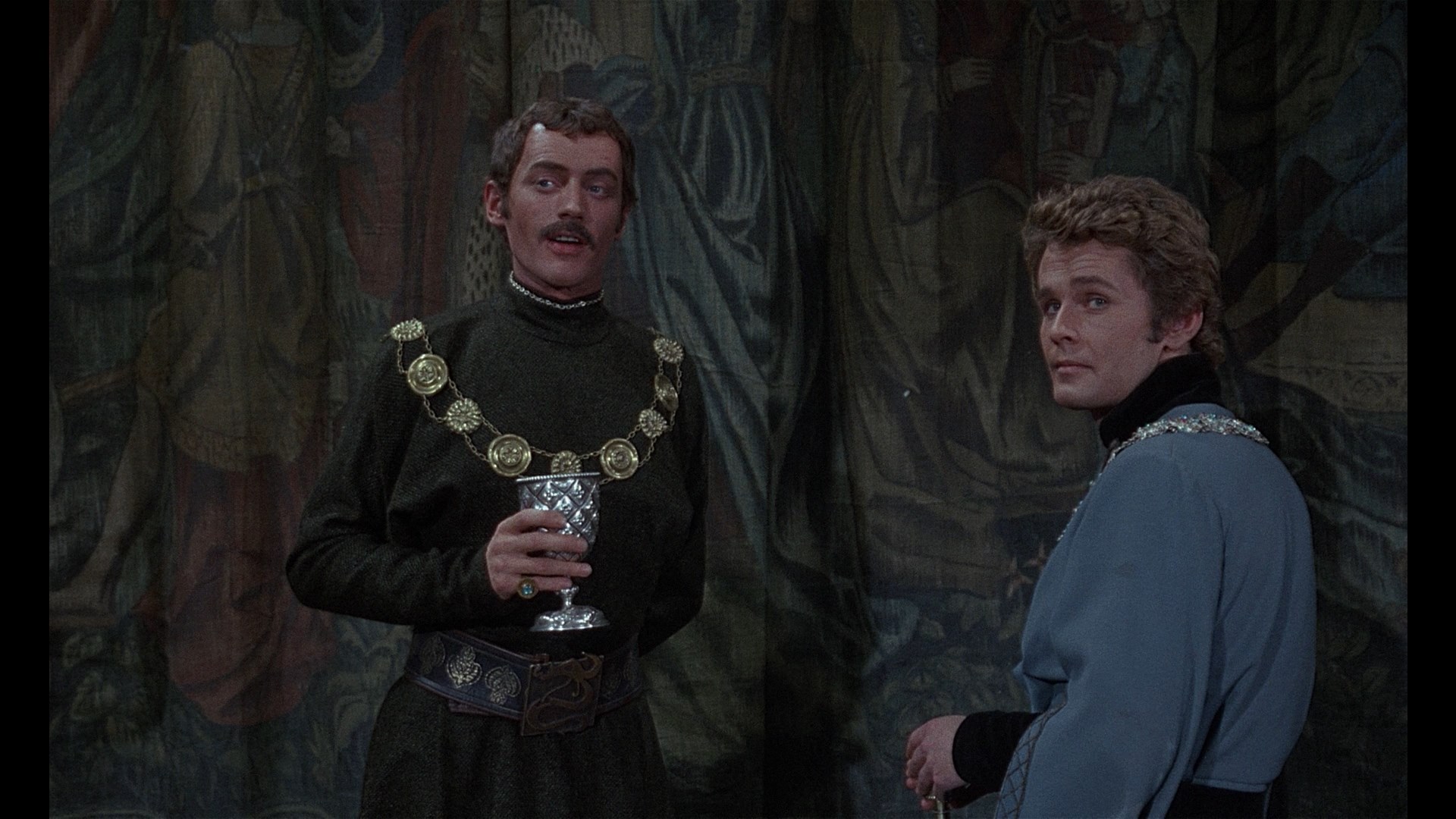 Released seven years later, A Challenge for Robin Hood gets its first 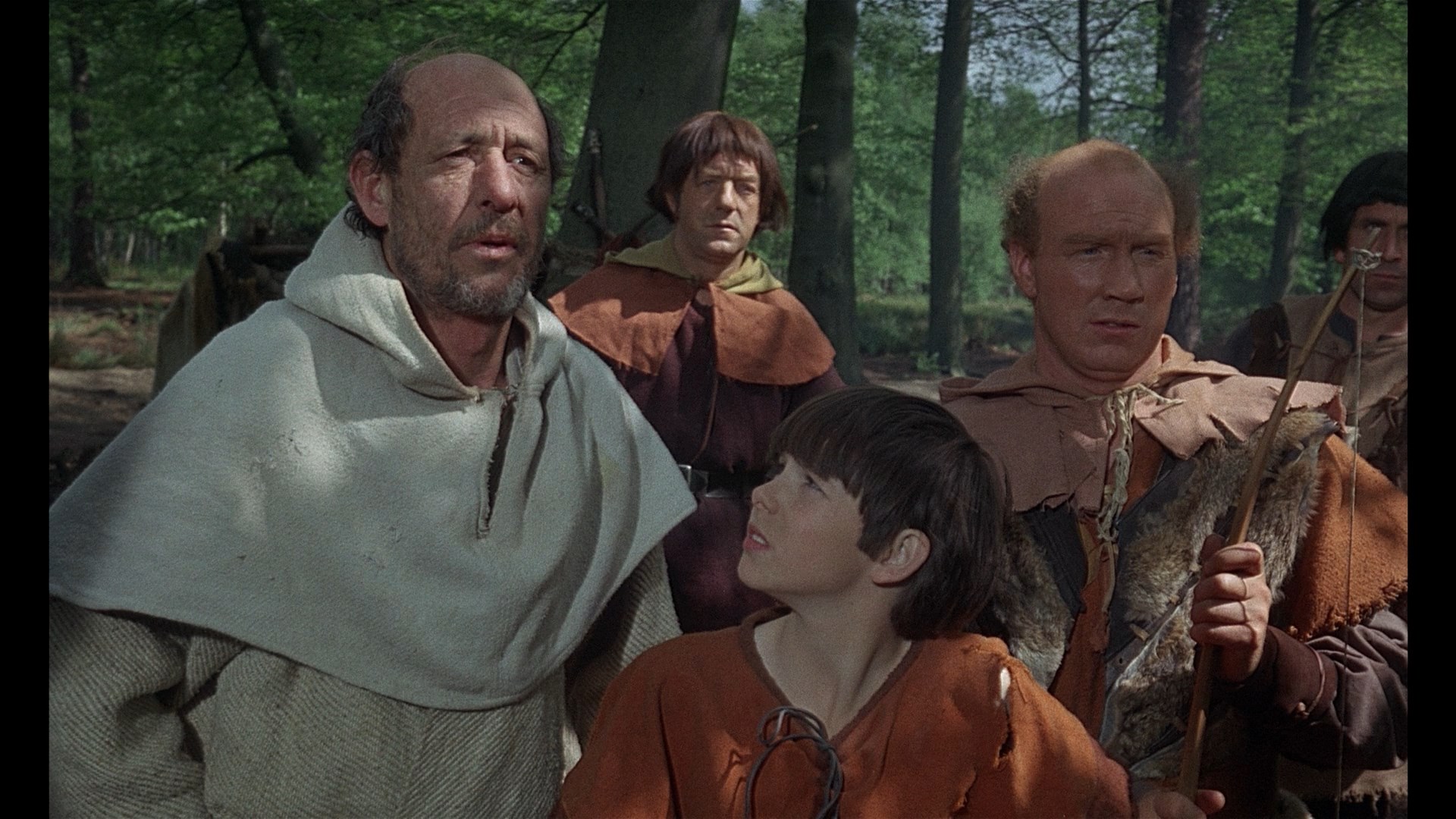 Blu-ray release ever here courtesy of a master supplied by StudioCanal -- and it's quite a beauty of a disc. Best known for working in TV, director C.M. Pennington-Richards takes over the reins here for an origin story about Robin (Ingham) being cheated out of his family legacy and forced to retreat to the forest where he teams up with Little John (Greene) and Friar Tuck (Hayter). Here the main baddie is Robin's older brother, Roger (Blythe), who conspires with the wicked Sheriff of Nottingham (Arnatt); cue the disguises, wrestling tournaments, sword fights, and romance with Marian (Hamilton).

A spirited and rather underrated adventure film, this one felt a little out of step with the times when it came out in early 1967 just before other Hammers like Frankenstein Created Woman, The Viking Queen, and Quatermass and the Pit. Part of the Seven Arts-Hammer Film Production cycle at the time, it got a reasonable release in the U.K. from Warner-Pathé Distributors but barely pulled in anything in the U.S. from Twentieth Century Fox. The lack of any star power didn't really help, and at least in the U.S., it's been quite hard to see apart from a brief VHS release from Anchor Bay in 1999. For its first time out in decades, A Challenge for Robin Hood fares extremely well here with a crisp, colorful 1.66:1 transfer with lots of blazing blues, yellows, and reds throughout. The LPCM 1.0 English mono track is also solid, again with improved SDH English subtitles. Rigby and Kevin Lyons supply a frequently funny and enlightening commentary that works nicely as a chaser to the earlier one in this set, identifying all the shooting locations, actors, diversions from other cinematic Robins, the inappropriate nature of some bits for a film supposedly geared to children, and Hammer links scattered throughout. Another audio option, "The John Player Lecture: The Hammer Forum" from 1971, spends just over an hour with John Russell Taylor chatting about all things Hammer with contributions from Michael Carreras, Cushing, Fisher, James Needs, Anthony Nelson-Keys, and Jimmy Sangster, including quite a bit of 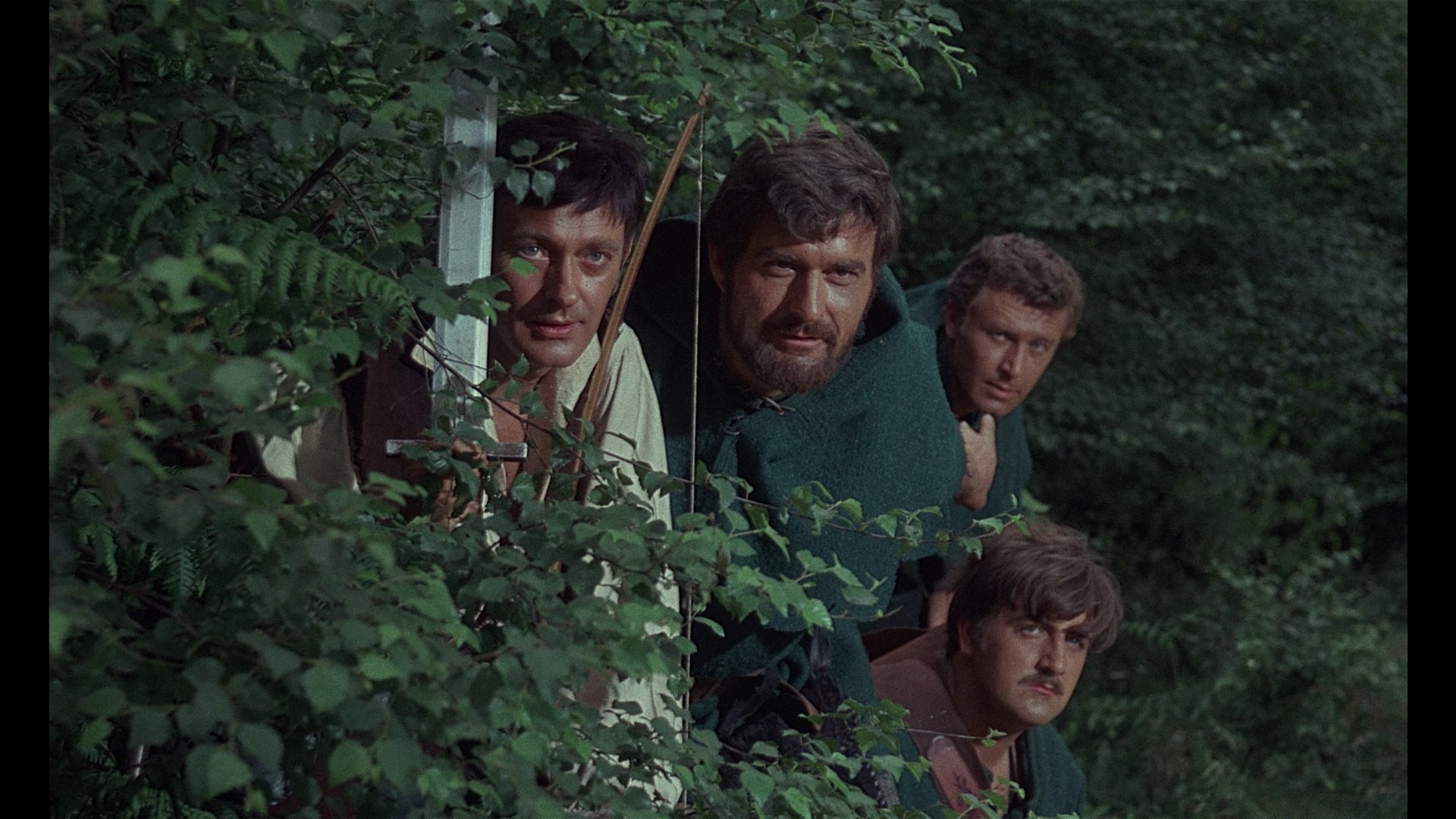 discussion about the films' reception at home and abroad. "The BEHP Interview with C M Pennington-Richards" 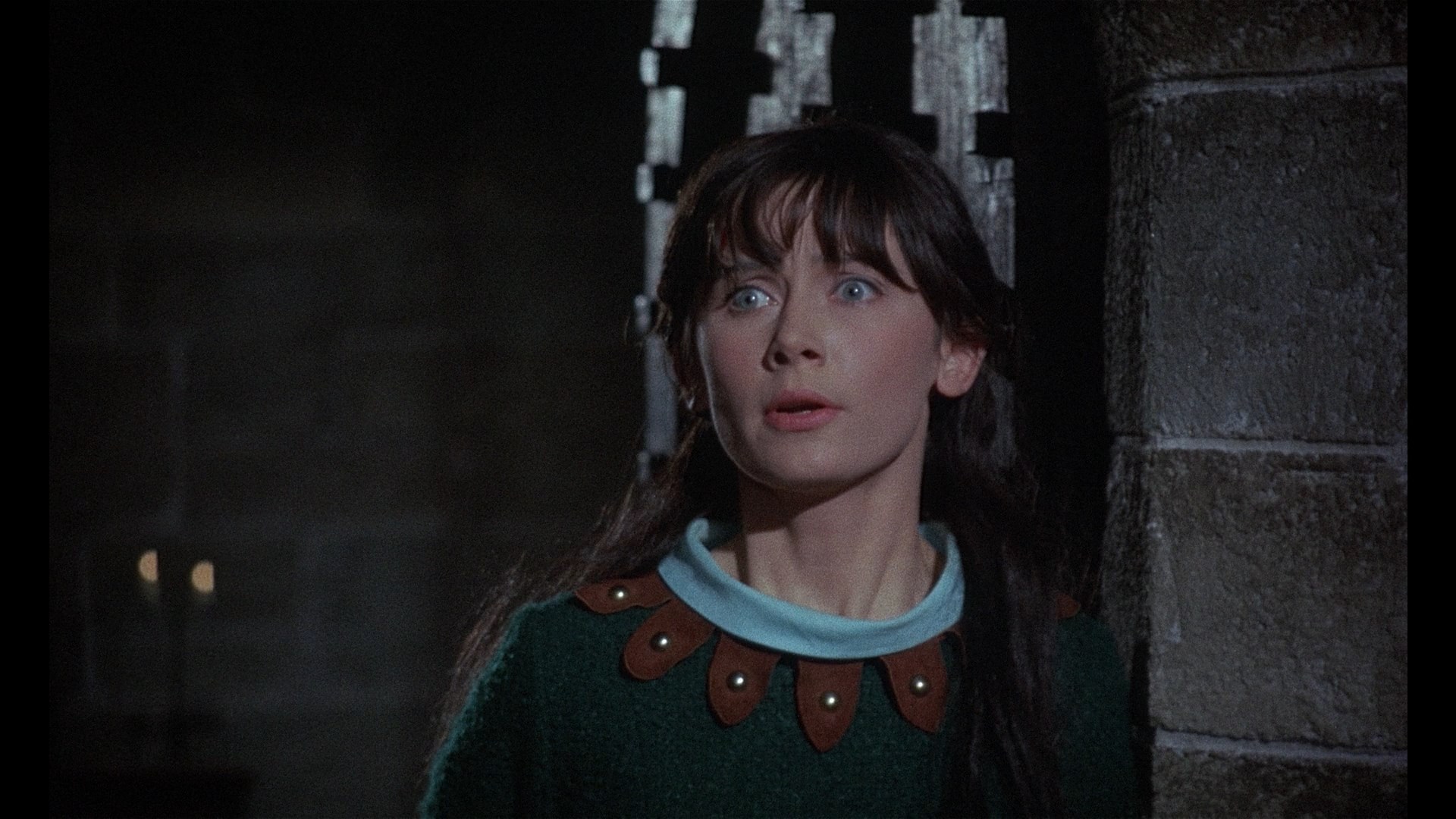 from 1990 is a 96-minute archival audio interview with Alan Lawson and Colin Moffat, in which the filmmaker talks about his schooling, his considerable work as a cinematographer, and his move to directing for both film and TV. In " An Excuse for Action" (11m13s), onetime child actor John Gugolka recalls his time in drama school, his casting in this film, and alternating the production at Pinewood Studios and out in the wild. Newman turns up on camera for "Sherwood on Screen" (24m44s), a swift and upbeat survey of the literary iteration that inspired most film versions, the pivotal '38 Warner Bros. interpretation originally meant to star James Cagney, and a slew of subsequent ones including the Greene TV series, multiple Walt Disney takes, and the later offerings with Kevin Costner, Cary Elwes, and more. In " Songs from the Hood" (11m23s), Huckvale returns to dissect Gary Hughes' boisterous score including the leitmotifs attributed to the major characters. Reason enough to pick up this set is 1975's Robin Hood Junior (60m45s), a marvelously entertaining supporting feature from the Children’s Film Foundation. Anyone who's seen past CFF releases might be surprised how ambitious and relatively opulent this one is, essentially retelling the Robin Hood legend with the main character and his Merry Men all played by little kids laying waste to adult villains. Future TV presenter Keith Chegwin has a ball in the leading role knocking barrels all over the place, firing arrows, and even unleashing an army of sheep. This would make a great co-feature with Bugsy Malone, and apart from some water damage at the 50-minute mark, the HD presentation here looks wonderful. Vic Pratt also provides another of his worthwhile CFF commentaries here identifying the major folks in front of and behind the camera while covering the state of the CFF at the time. The disc wraps up with the theatrical trailer and a gallery of 126(!) on-set and promotional photos. The limited edition package also comes with a poster and an 80-page book featuring an essay by Frank Collins, an article on Richard Greene, and sample critical reviews and archival documentation.