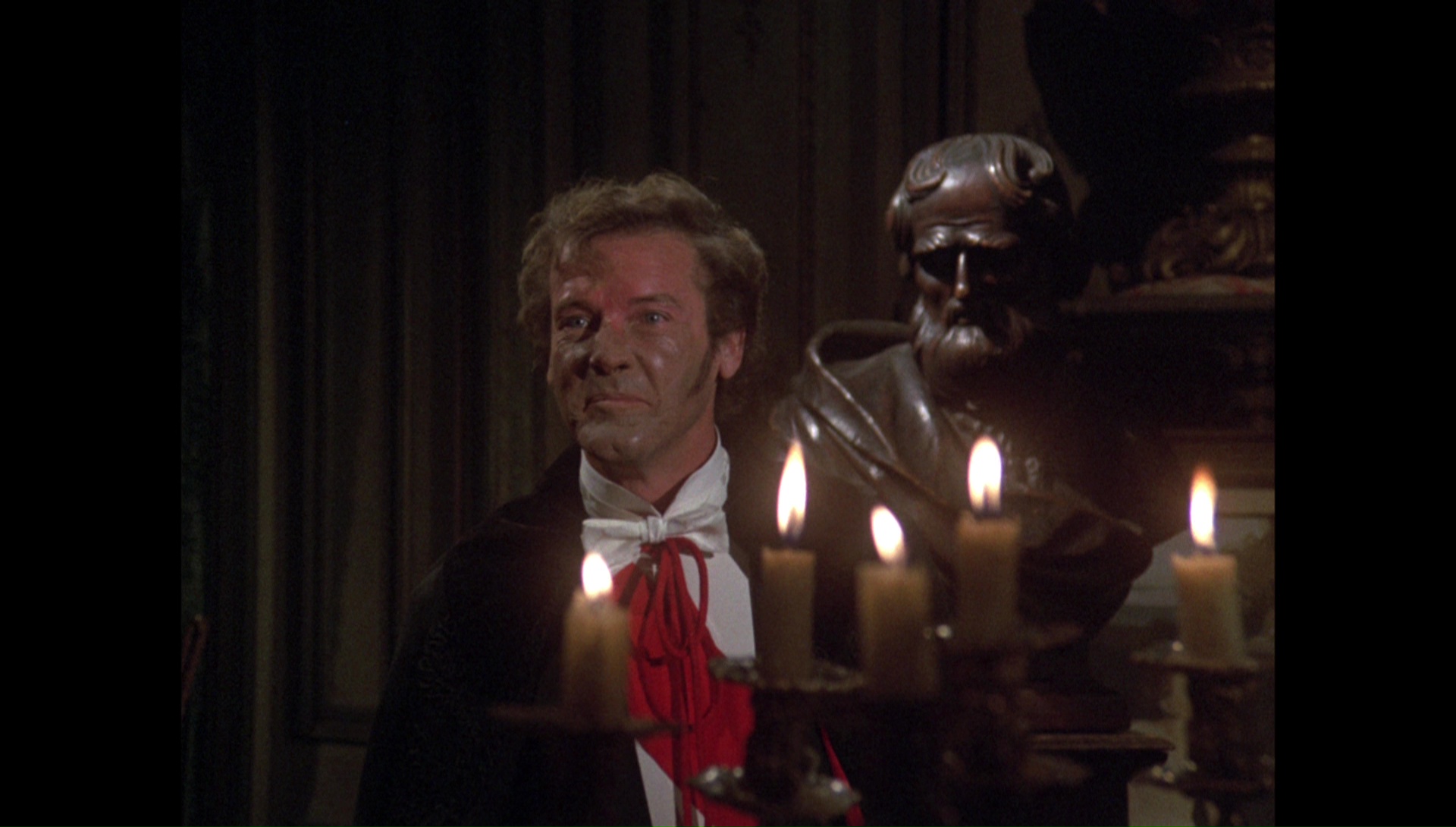 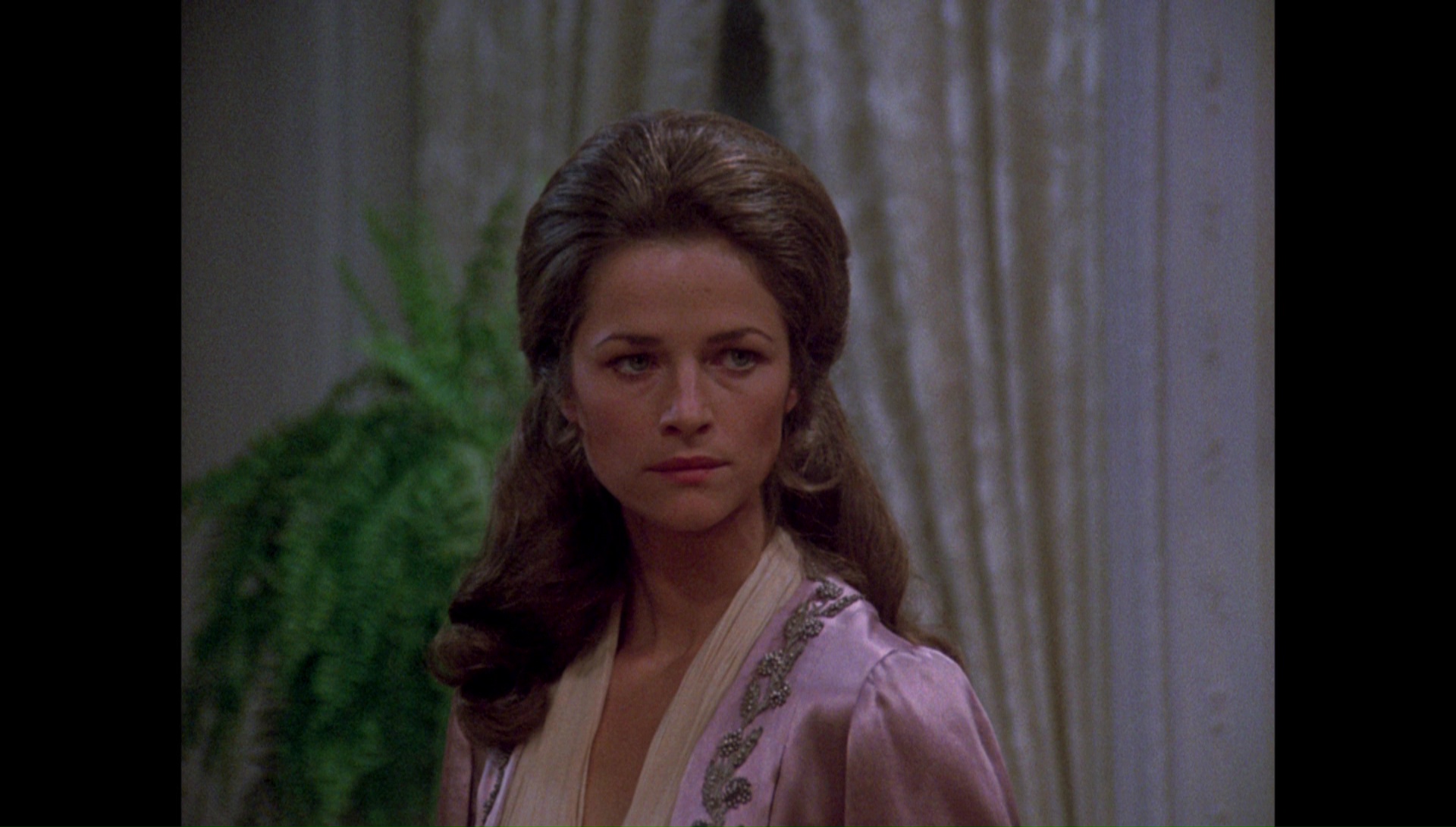 The same year literature's most popular sleuth was getting the revisionist treatment on the big screen with The Seven-Per-Cent Solution, American TV was making its own attempt at getting in on Sherlock mania with Sherlock Holmes in New York. One of the most lavish and ambitious made-for-TV films up to that point, the Fox production for NBC brought in the current James Bond and former star of TV's The Saint, Roger Moore, to play the brilliant private detective, with The Avengers lead Patrick Macnee enlisted as his Dr. Watson. (The pair would team up again almost a decade later for A View to a Kill.) The result is an entertaining and very worthy addition to the Holmes movie canon, with a clever plot and plenty of atmosphere making it stick in viewers' minds for many years even when it became almost impossible to see for far too long.

After donning a disguise to expose the latest assassination plot in London by the nefarious Professor Moriarty (Huston), Sherlock Holmes is told by his archenemy that there's already a nasty scheme in the works that's designed to demolish the private detective's reputation once and for all. Returning home to Baker Street, he's told by Watson that Irene Adler (Rampling), the one that got away in Holmes's life, is about to bow in a new stage production in New York, her ninth season there. It's Adler's custom to send him prime theater tickets for each new show, 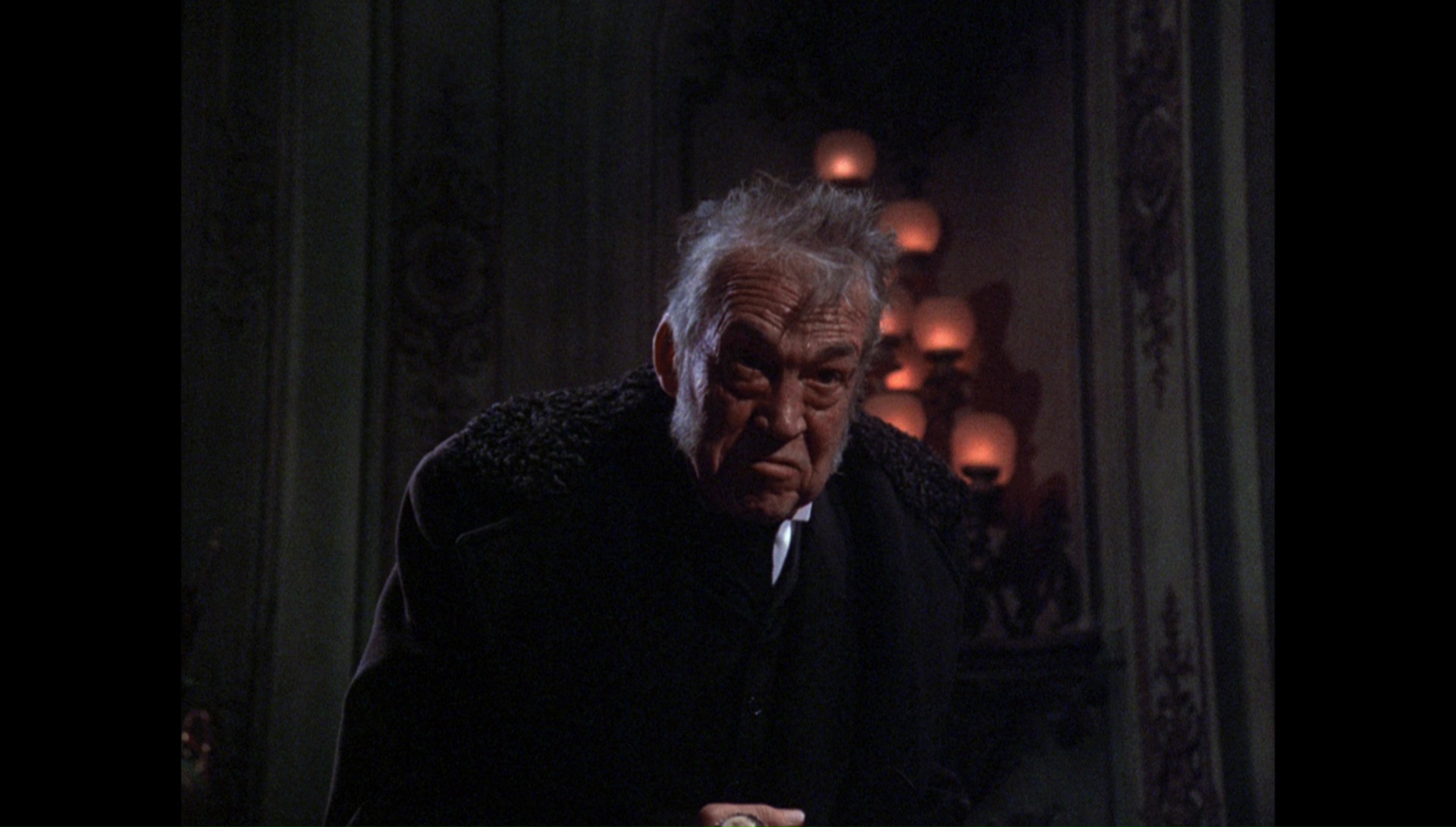 but this time they arrive torn to pieces -- a clue that Moriarty's plan is taking place in the Big Apple. The opening night of her show turns out to be suspicious already when she's called in sick and set to be replaced by an understudy, which sends Holmes and Watson fleeing to her aid. Soon it becomes obvious that she and her son (who might be Holmes's) are not only in danger, but Moriarty has dastardly plans for the city's biggest bank -- and it's up to Holmes, Watson, and American Inspector Lafferty (Huddleston) to stop the brilliant criminal before it's too late.

The idea of casting the urbane Moore as Arthur Conan Doyle's iconic creation seems a little odd at first (though not as odd as Charlton Heston, who tackled the role in a 1991 TV movie, or Robert Downey, Jr.), but he carries it off well here despite some weirdly enormous sideburns. Good sport Macnee would go on to play Watson in a pair of TV miniseries with Christopher Lee as Holmes, and he's fine here as what amounts to a genial sounding board for Holmes. Huston really only appears at the beginning and end but gets to ham it up beautifully, mispronouncing French phrases galore and nearly swallowing the scenery during the big showdown at the end. Rampling's an austere joy to watch as always, and even 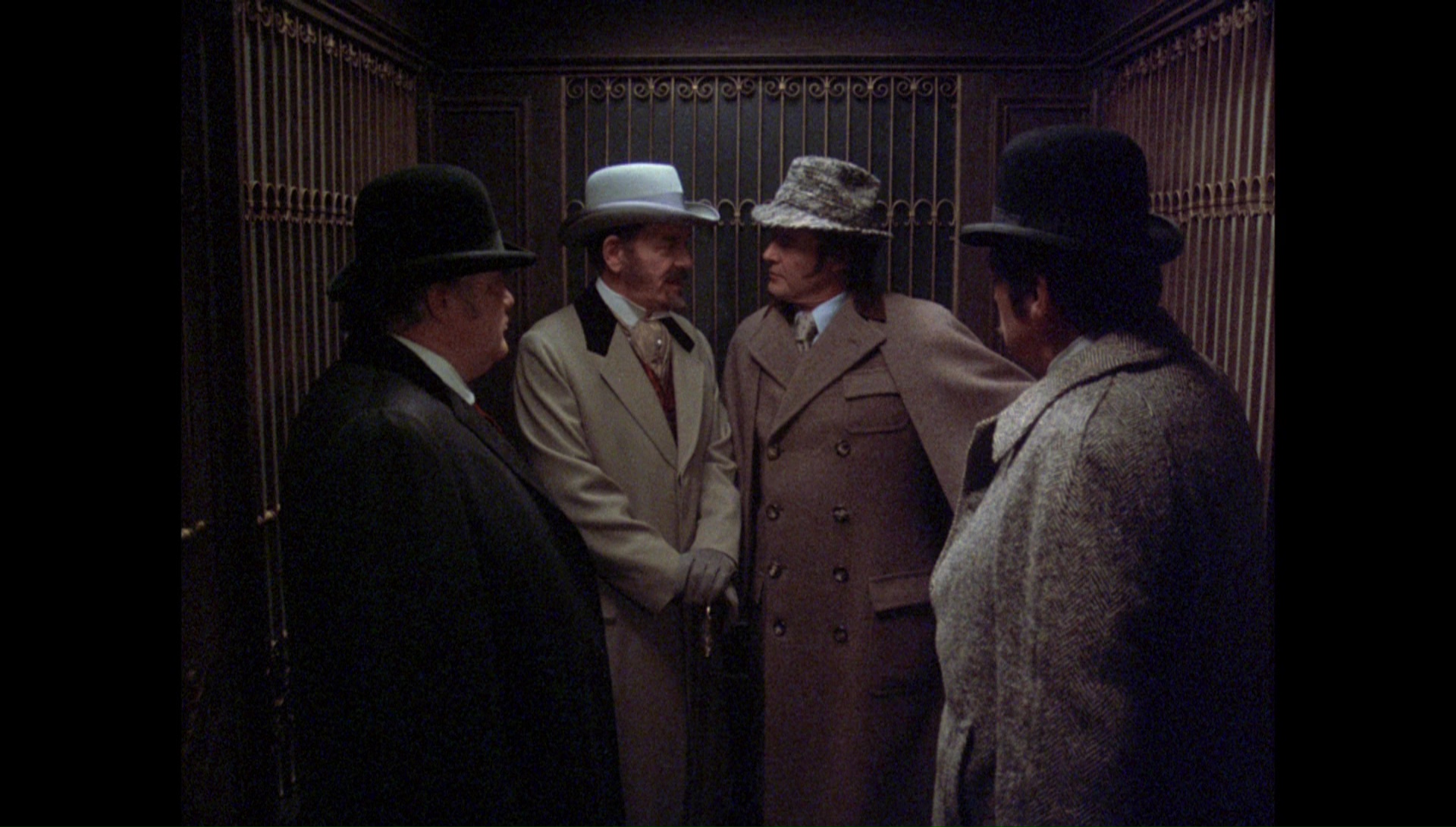 Gig Young turns up in a small but pivotal role as a a banker. It's modest due to its TV limitations, of course, but for '76 this is about as good as it gets for the small screen. Extra points for the catchy score by the late Richard Rodney Bennett, who had recently done Murder on the Orient Express. 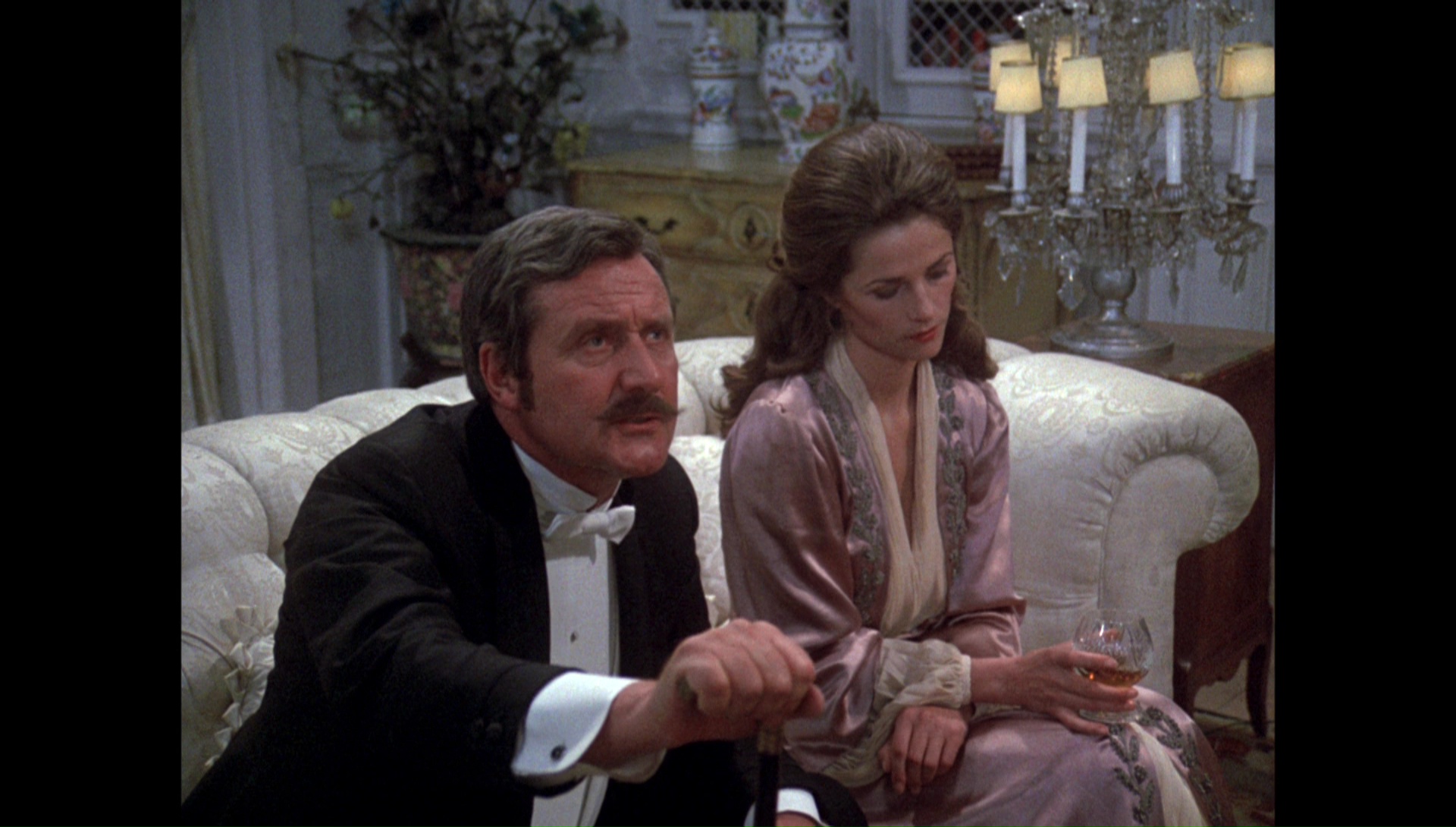 Inexplicably difficult to see for decades apart from a handful of TV reairings (most notably on the Fox Movie Channel), this film finally bowed on DVD in Australia in 2012 from Madman, complete with a new audio commentary by Moore andHenry Holland covering some potential early casting (Oliver Reed was approached as Moriarty), the hands-on nature of Moore's role during the film, the fun array of disguises he gets to use, and the demands of tackling an iconic character with his already established personas in the public eye. In 2014, Fox issued the film as part of its MOD line under the banner of "20th Century Fox TV Movie Archives," culled from a decent broadcast master and minus any extras at all. The 2016 Blu-ray from Signal One Entertainment is the best release by far, featuring a new HD master that knocks the black levels down to their original moody levels; the entire film gets an appealing, burnished look as a result, with the interiors in particular looking richer and more impressive. An alternate theatrical aspect ratio option is presented as well with the film matted to 1.78:1; it's workable enough but feels cramped, so if this is your first encounter with the film, stick with the main 1.33:1 option. The LPCM English mono audio sounds excellent, with optional English subtitles provided. The previous commentary is also carried over here, making this the final word on this underrated and engaging little treat so far.