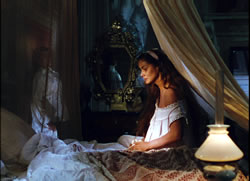 Of all the major Technicolor classics in world cinema, few have been absued for so long and so soundly as Senso, the first color film by director Luchino Visconti after a trio of well-respected neorealist classics (Ossessione, La terra trema, Bellissima). The break in style here is obvious from the opening scene as he dives headfirst into lush, operatic melodrama with the ill-fated romance of Livia Serpieri (Lisa and the Devil's Valli), a married Italian countess, and an unattached Austrian soldier, Lieutenant Franz Mahler (Strangers on a Train's Granger), who meet while attending a Verdi opera in Venice. Italy's occupation of Algeria is nearing its end in 1866, and their illicit affair causes more than a few problems which led to resentment, treachery, and ultimately tragedy. 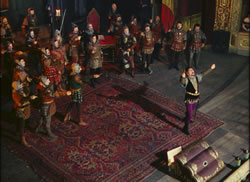 Though poorly treated upon its release, Senso quickly gained significance as the first of Visconti's opulent, exquisitely detailed period films examining the decaying underbelly of the European upper classes (a setting he knew well given his noble bloodline). The artistic line going from this film to The Leopard, The Damned, Death in Venice, Ludwig, and The Innocent is crystal clear, and film buffs have argued for decades over which one is the best. Like many of Visconti's subsequent films, this one was heavily cut in almost every country in which it played (including the wholesale removal of the defeatist battle scene near the end, which was dropped at the insistence of the Italian government) and only released in America many years later by a tiny indie company as The Wanton Contessa, which was almost half an hour shorter. This fate seems odd given that this film was oddly targeted for major international appeal, particularly with the presence of Granger and its credited "dialogue collaboration" with Tennessee Williams and Paul Bowles.

Even worse, every video edition of Senso since the early days of VHS has been an ungodly mess. A badly faded and heavily damaged version appeared on tape from Cinematheque in the late '80s, and that same one-inch master was recycled throughout the DVD era in several countries (including Wellspring in the US) for a number of wretched releases that made mincemeat of its terrific color photography. Finally a full-scale restoration was performed in 2010 for a new HD master by the Cineteca di Bologna working with cinematographer Giuseppe Rotunno (who worked on later Visconti films) and Martin Scorsese, and the results are, to put it mildly, a huge improvement. Colors finally look vivid and have that glossy '50s sheen found in many European productions of the period, and apart from some very minor unavoidable damage and a couple of instances of red separation, this is about as good as you could imagine the film possibly looking. Studio Canal issued the new transfer first as a French and Italian-distributed Blu-Ray with no English options at all, so we'll jump right ahead to the Criterion one instead which followed a few months later. Not surprisingly, the Blu-Ray option is the way to go over the DVD; along with their prior release of The Leopard, this is a strong case for all of Visconti's films to get a first-class HD overhaul as soon as possible. (For as much flack as it gets, Ludwig would be incredible in 1080p.) 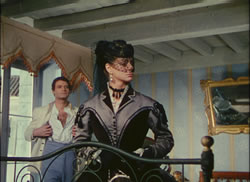 The main feature is presented in lossless Italian audio with optional English subtitles, but just as fascinating is the inclusion here of The Wanton Contessa, which has been out of public circulation for decades. Though obviously much shorter and sporting a less impressive HD transfer (from the Harvard Archives, no less), it's great to finally see this legendary variant complete with Valli and Granger using their own voices in English (the language in which they primarily played their roles). It's also a nice opportunity to actually hear some of the Williams/Bowles contributions, too.

Aside from the English cut, you also get the half-hour "Making of Senso," which features Rotunno, costume designer Piero Tosi, assistant director Francesco Rosi, and Caterina D'Amico (Luchino biographer and daughter of the screenwriter), who cover the film's historical influences, source novel, production history, and stormy release in its native country. Another half-hour featurette, "Viva Verdi," covers the film's relationship to opera (especially Il Trovatore) and Visconti's affinity for the art form, while film writer Peter Cowie (a familiar name from many a Criterion commentary) offers his own half-hour take on the film's significance and artistic merit. A vintage 1966 BBC episode from Sunday Night about Visconti's work is also included (and has some nice tidbits about his world outside the cinematic realm). Finally, the package also contains liner notes by Mark Rappaport and some relevant excerpts from Granger's showbiz autobiography, Include Me Out, which is worth seeking out in its entirety. All told, it's an amazing package for a film that's been lurking under some kind of filmic curse for far too long.