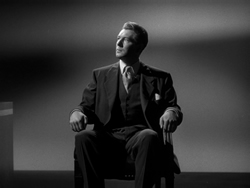 While traveling in Mexico, American tourist Celia (Bennett, cult star of Dark Shadows and Suspiria) ditches her intended husband as 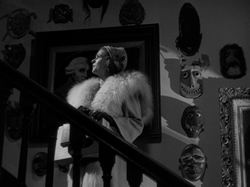 well as a chatty travel companion (Gilligan's Island's Schafer) when she meets a mysterious, widowed architect/editors, Mark Lamphere (Redgrave, fresh off his creepy ventriloquist turn in Dead of Night). They wind up marrying, and she goes off to live with him; however, his house turns out to be an oddball domain containing seven rooms devoted to famous murderers, with the seventh kept perpetually locked. Also living under the same roof are his sister Caroline (Revere), his son David (Dennis), and disfigured housekeeper Miss Robey (O’Neil), all of whom might figure in the house's sinister secret.

The final 1940s film from director Fritz Lang closed out a streak of fascinating, wildly stylized thrillers like Cloak and Dagger and Ministry of Fear; as with two of his prior (and perhaps best) noirs, he again casts leading lady Joan Bennett from Scarlet Street and The Woman in the Window, this time surprisingly not playing a femme fatale. Adding to the air of marital discomfort is the fact that the film was executive produced by Bennett’s husband, Walter Wanger (who would soon shoot her agent in a jealous rage), under the banner of their troubled production company, Diana Pictures. A famously troubled production in many respects, Secret Beyond the D 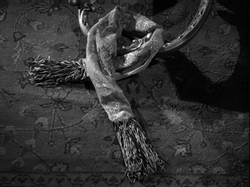 oor wasn’t spoken of with much fondness by any of the participants, particularly its two leads. Already a notoriously demanding ringleader, Lang reportedly went into overdrive on this film and bore a particular grudge against cinematographer Stanley Cortez (soon to vault to legendary status with The Night of the Hunter and The Naked Kiss), who wasn’t Lang's first choice.

Against the odds, the film actually works like a charm if you throw away expectations of a tight narrative and instead soak in its bizarre, dreamlike atmosphere. From its opening frames of a paper boat wafting in a starlit lake the film is completely overripe and haunting, with Bennett’s hypnotic voiceover accompanied by animated visuals from none other than Walt D 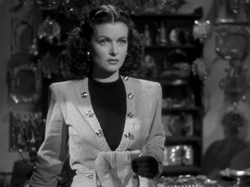 isney. The spirit of Alfred Hitchcock’s Spellbound hangs heavily here with a heavy emphasis on psychological symbolism (not to mention using the same composer, Miklós Rózsa) and the idea of a woman bonded to a man with a fuzzy, menacing past, but the execution is more bizarre than Hitch would have dared at the time.

The expressionistic photography by Cortez turns the film into a visual playground, almost becoming an experimental film in its final act and working as a fine fever dream with enough film noir touches to keep it grounded into some kind of recognizable genre. It's also perhaps the most outrageous example of the “Who's this strange guy I married?” subgenre whose popularity exploded in the thrillers of the 1940s with glossy entertainments like Gaslight and Rebecca and morphed into the identity crisis science fiction films of the subsequent decade. 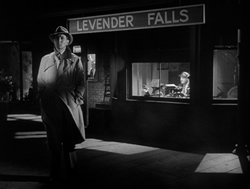 Released theatrically by Universal Pictures, Lang’s film went through a few different companies' hands before winding up in the Republic Pictures library, which led to a few VHS editions in the '80s. Like many other Republic titles, it went out of circulation for a couple of decades while DVDs appeared in both France and England. The latter featured a nice restored transfer from Exposure Cinema, while Paramount continued listing the film on its docket on and from since around 2006. Apart from the UK disc, watchable prints were scarce, and the VHS version looked so drab it did little to enhance the film’s neglected status among the director’s filmography.

As with other Republic noirs like The Dark Mirror, Lang's film was finally freed from movie jail with a 2012 release from Olive Films on both feature-only Blu-Ray and DVD editions. The HD transfer hasn't undergone any scrubbing or tweaking, which means what you're getting basically a sharp, film-like presentation with the occasional blemish but a huge uptick in texture and detail over any other version out there (and any of the really battered 16mm prints floating around). Boasting an attractive silvery sheen and rich black levels, it’s a very satisfying piece of work with lots of little touches finally visible right from the hand-drawn opening scene. This may not be the most commercial starting point for anyone looking to explore Lang's cinema, but if you want to see a Hollywood thriller amped up to operatic levels and shot through with a giddy surrealist sensibility, this one's hard to beat.