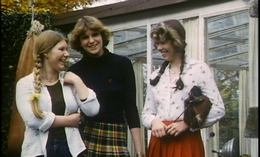 Could there possibly be a single stone left unturned in the shocking sex lives of '70s German teenagers? As it turns out, yep, there most definitely could be, as proven in this twelfth installment in the long-running film series. Here the 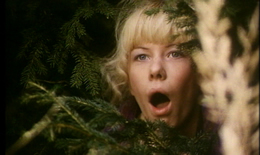 central gimmick tying together a batch of unrelated stories is a meeting of the staff at a German high school newspaper, where they're debating the merits of letters to the editor with topics like "Total woman or loss of femininity?" Can a girl still be called in a girl in this permissive society, where "they all behave like garden hoses?" They decide to sort the letters out into stacks and present some of the choice entries, each dramatized in titillating detail for your amusement.

For example, we start off with the story of Anne, a pigtailed nymphet whose (much) older pilot brother, Helmut, has just jetted back into town. When Helmut gives a lustful look at Anne while she's toweling off from a bath, it awakens feelings in them both that become even more complicated when Helmut's ex-wife shows up on the scene. Will Anne put her brother to the test and set the stage for a ridiculously dramatic tragic twist ending? What do you think? Next up, it's off for a biology field trip to the farm for a bunch of students including Barbara, a toothy blonde who isn't interested in the teachers dishing out lessons like "In nature, all weak creatures die." Instead, her boyfriend wants to go off in the woods for a beer and a smoke... and we all know what that leads to. However, when the whole class takes a one-hour break to hang out at the nearby lodge, everyone else decides to misbehave, too, with Barbara getting a front row voyeur's seat for her friends' "Olympic-ready" antics. 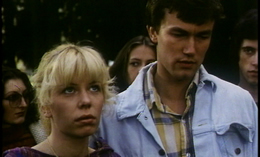 And how about pretty brunette Gaby, who keeps getting migraine headaches every time a Latin test is coming up? It's off to the doctor for her, except she shows up on the wrong day -- when the office is closed, and the only guy in the building is the randy plumber, Herbert Ballermann, who likes to dress up in medical duds. From there it's just a matter of time before Gaby winds up getting a much closer inspection than she bargained for. It's back to blondes again for the tale of Etta, an insatiable (and suspiciously long in the tooth) adolescent who starts off as a first-rate student but plunges to the depths of depravity thanks to her promiscuous mother (who brings home a different guy every afternoon), a worthless dad in rehab, 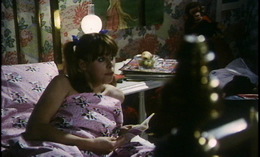 and a motorcycle-driving boyfriend who uses her relentless sexual appetite to introduce her to the world of vice at the local junkyard. Finally, a bourgeois couple gets into trouble when their French exchange student doesn't show up, disappointing their goofy sexpot daughter, Dina. They get a surprise when the student, Niki, does turn up at their gate -- and happens to be a boy, rather than the girl they were expecting. Dina is immediately prancing around naked and watching the new arrival work out in his underwear. She's frustrated but his insistence on abstinence, so it's up to a trip to the local nudist health club to nudge things along.

Released in dubbed form as Carnal Campus, this was the fourth official series outing for director Walter Boos, one of the most prolific softcore specialists of the '70s with titles like Love in 3D. There's nothing particularly extreme about this one apart from the mildly kinky incestuous twist in the first story, but it's all amusing, good-natured fun as usual. There's no shortage of nudity or silliness on display, and the framing story is even less significant than usual as it takes up only a couple of minutes of screen time and seems all but abandoned by the time the film hits the final story. Virtually impossible to see in an English-friendly edition, this will be another welcome series entry courtesy of the American DVD release from Impulse, which is adheres to the usual presentation: ragged opening credits, decent anamorphic 1.66:1 transfer, and some print damage here and there. Apparently few of the films have been kept in pristine condition (with a few not even surviving in complete form), so this is likely as good as it's going to get. The German mono audio sounds fine throughout with optional English subtitles, highly quotable as usual.

Buy from Diabolik
Buy from Amazon