Following the success of Italian mondo films which depicted the disturbing "reality" of human life around the globe, some enterprising German producers decided to take it 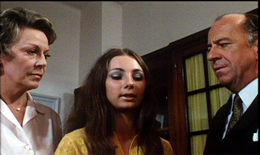 one step further by smashing this template together with the saucy Scandinavian sex films raking in cash thanks to the likes of I Am Curious (Yellow). The result? Instant box office gold with the Schoolgirl Report series, a "life on the street" look at all the trouble young nymphets were getting into around Deutschland, featuring "candid" interviews and various naughty scenarios amply balancing bare flesh with rib-nudging comedy. The first film in the series, 1970's Schoolgirl Report #1: What Parents Don't Think Is Possible (or Schulmädchen-Report: Was Eltern nicht für möglich halten), was loosely based on a sex report manual by Günther Hunold and quickly inspired 13 official sequels, not to mention plenty of uncredited imitations. (Heck, Jess Franco cashed in on the craze many times by himself with the likes of Virgin Report and For the Second Breakfast: Hot Love). 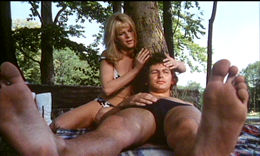 Our story begins when plucky 18-year-old Renate decides to take matters into her own hands on a school field trip and starts making it in the back seat with the bus driver while everyone else is outside. Unfortunately, one of the prudish teachers catches her in the act and drags her into the headmaster's office, where she defends her actions as her own business. The obvious solution? Kick her out, of course. However, adolescent psychologist Dr. Bernauer defends her actions as part of the new youth's sexual freedom and promptly gives plenty of examples to back up his thesis. His case studies include plenty of shameless minxes talking dirty to a priest in the confession booth, going at it with each other in the lockerroom, and showing off in public dressing rooms, all interspersed with off-the-cuff street interviews with various German teens talking about their views on sex.

Though the passage of time has rendered this film's "shocking" depictions of frisky youths rather quaint by today's standards, the first Schoolgirl Report still holds up as a solid slice of counterculture pop art erotica. From the fashions and hairstyles to the free-for-all natural nudity (lots of pubic hair and not a trace of silicone in sight), it's a refreshing step back to a more innocent time when the mere thought of an unmarried young girl getting it on with someone of her own free will was enough to send the establishment into spasms of moral outrage. Of course, this basically being a European sex comedy at heart, much of the humor just seems flat-out bizarre, such as this early exchange between a young boy and girl at a family barbeque:

"Your sausage is burnt."
"It's my sausage. I can burn it as often as I want. Like our history teacher: black on the outside and brown inside."

Err, what? Also noteworthy is the fantastically catchy easy listening score by German B-movie legend Gert Wilden, whose work on these films experienced a new lease on life in the 1990s thanks to a hit soundtrack compilation release (a la Vampyros Lesbos).

First released in America in an edited, mostly pube-free version as The School Girls (with occasional appearances on VHS under that title), the first Schoolgirl Report is presented uncut on Impulse's much-needed DVD with the original, vastly superior German language track, with optional English subtitles. The German version has circulated without subs on Japanese and German DVD, but this marks the first English-friendly, complete presentation anywhere. Apart from the ragged-looking main titles which appear to be spliced in from an inferior, slightly cropped print, the bulk of the transfer looks fantastic and easily eclipses those scratchy old reissue prints and dupey video copies. The luscious color schemes come out nice and clear, and the deliberately low-tech appearance of the street interviews still has a pleasingly film-like look without breaking up into swarms of grain. No extras, but heck, it's taken so long to get a good English version of one of these films out to the public, how can you possibly say no?