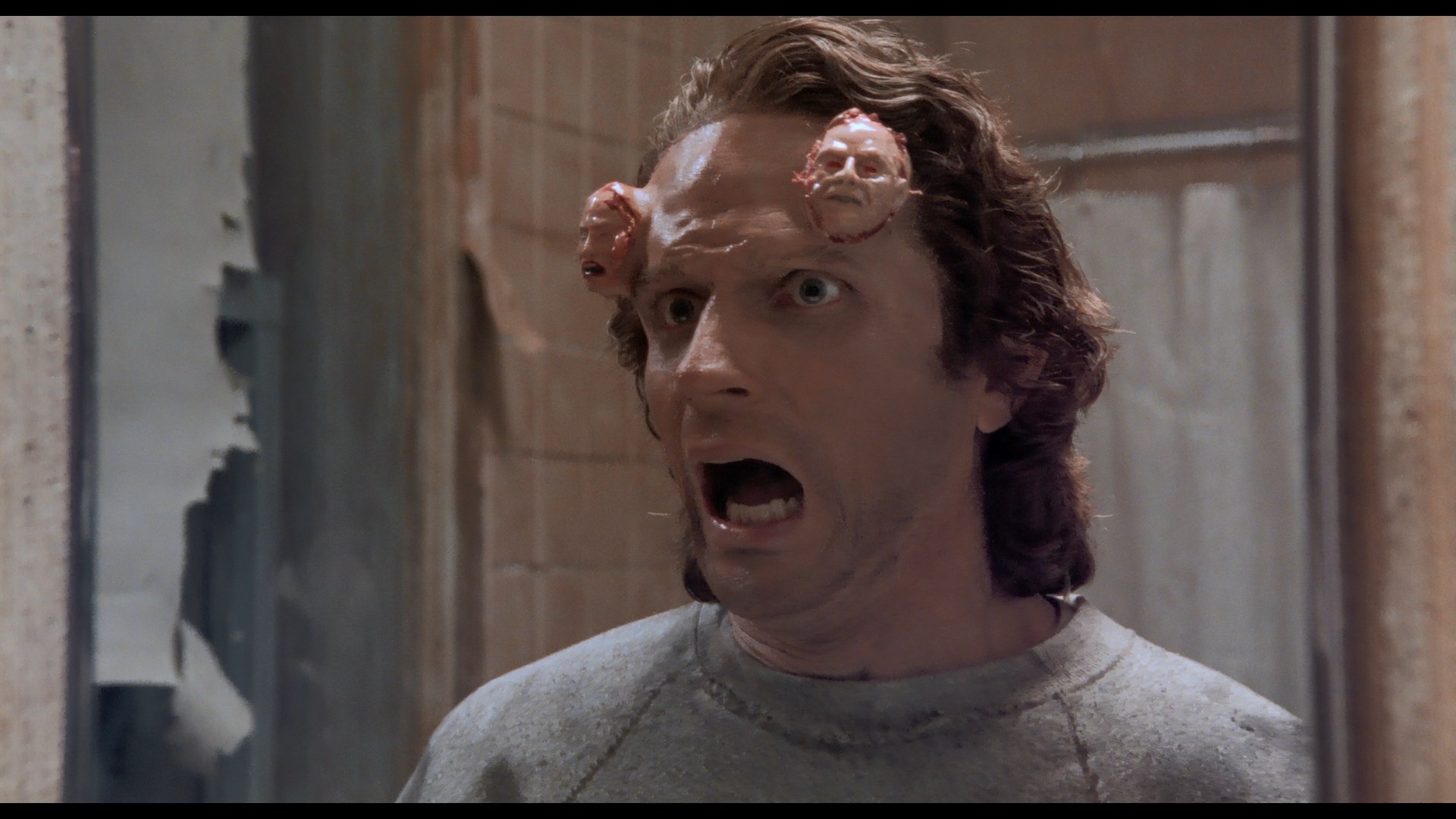 breakthrough success of Scanners in 1981 and its 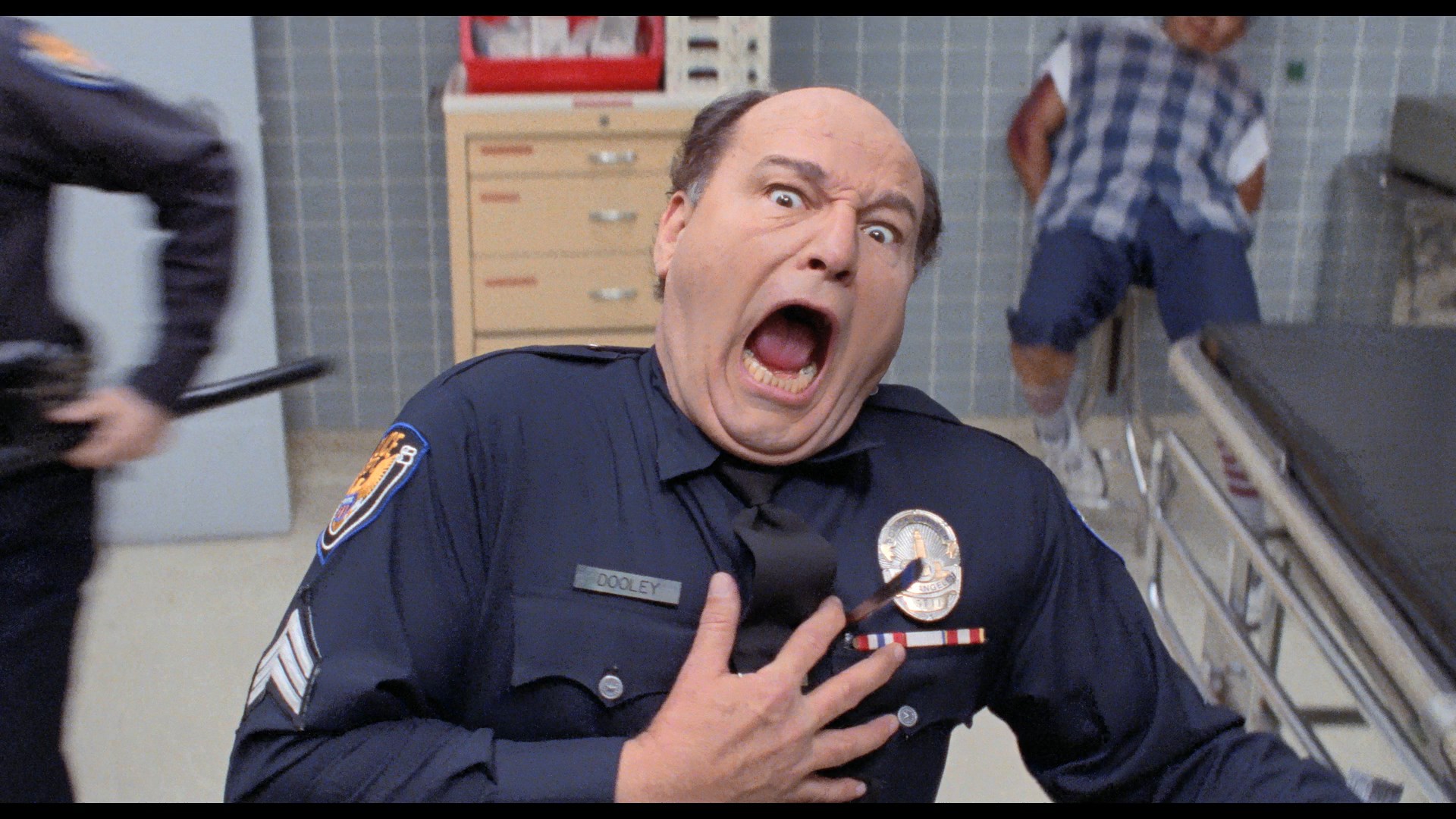 revolutionary special effects helped put Canadian writer-director David Cronenberg on the radar of Hollywood, opening the door to transition from his classic body horror tax shelter productions to working with major American stars. That film was also the first of Cronenberg's to spawn a sequel -- several, in fact, including the back-to-back Scanners II: The New Order and Scanners III: The Takeover, both in 1991. The common element of all these films was the presence of producer Pierre David, who was also on board for The Brood and Videodrome, and he decided to take the reins for what could best be described as an offshoot of the series: Scanner Cop, a direct-to-video feature that became a hot renter for Republic on VHS back in 1994. Starting over with new characters while retaining some plot elements, the film is a wild showcase for practical effects that add a few new wrinkles to the obligatory highlights like pulsing veins and exploding craniums. That film's star, the late Daniel Quinn, stuck around for an immediate sequel, Scanner Cop 2: The Showdown, which was handed over to Mindwarp director Steve Barnett. Even more elaborate than its predecessor, the follow-up film was also a steady favorite at the time, though both eventually became more difficult to find and are now ripe for reappraisal.

The first film begins with young Samuel witnessing the complete mental breakdown of his scanner father, who hallucinates tiny heads bursting out of his 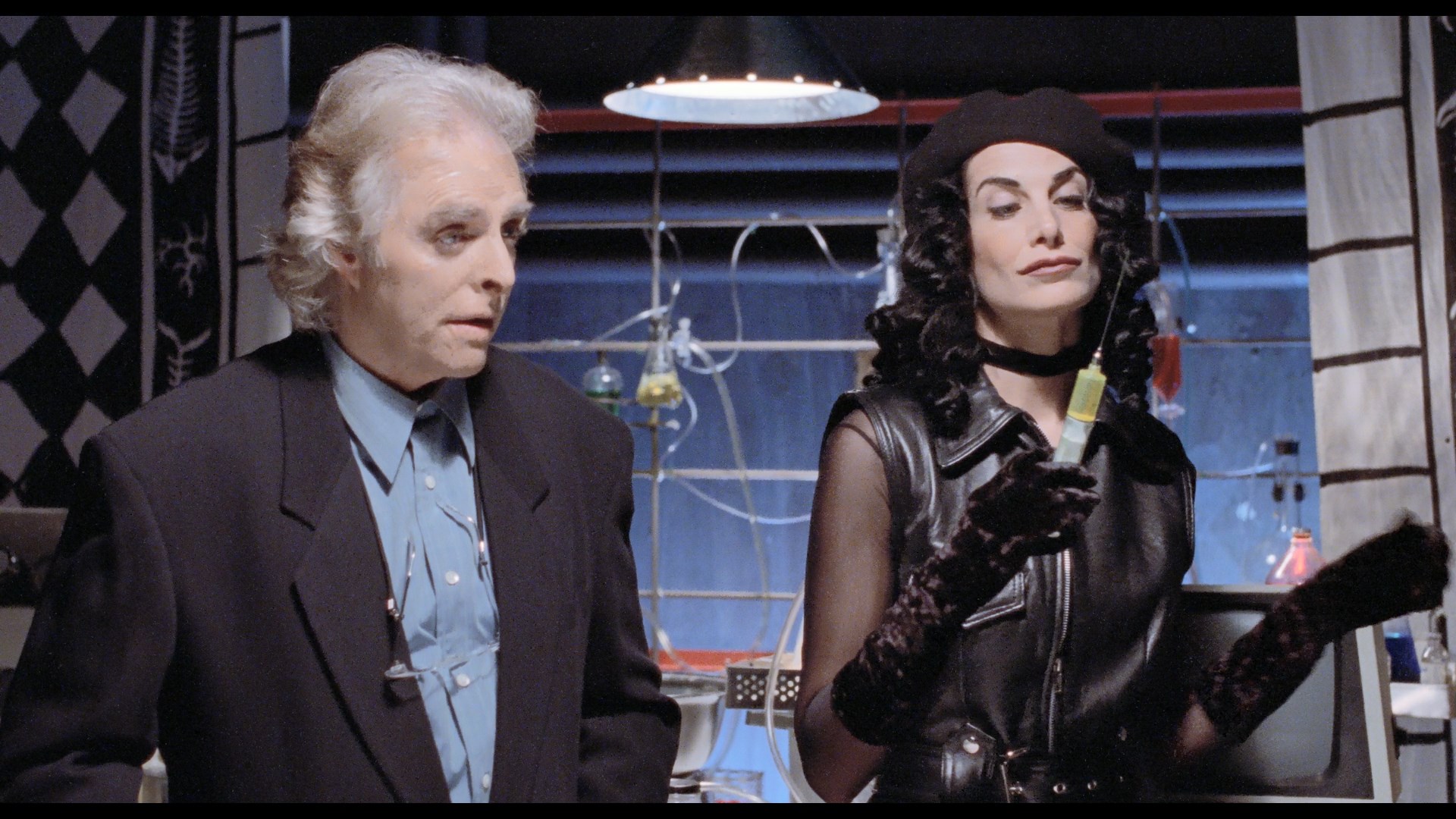 skull in their apartment bathroom. When the police intervene, his deranged dad physically attacks the two officers only 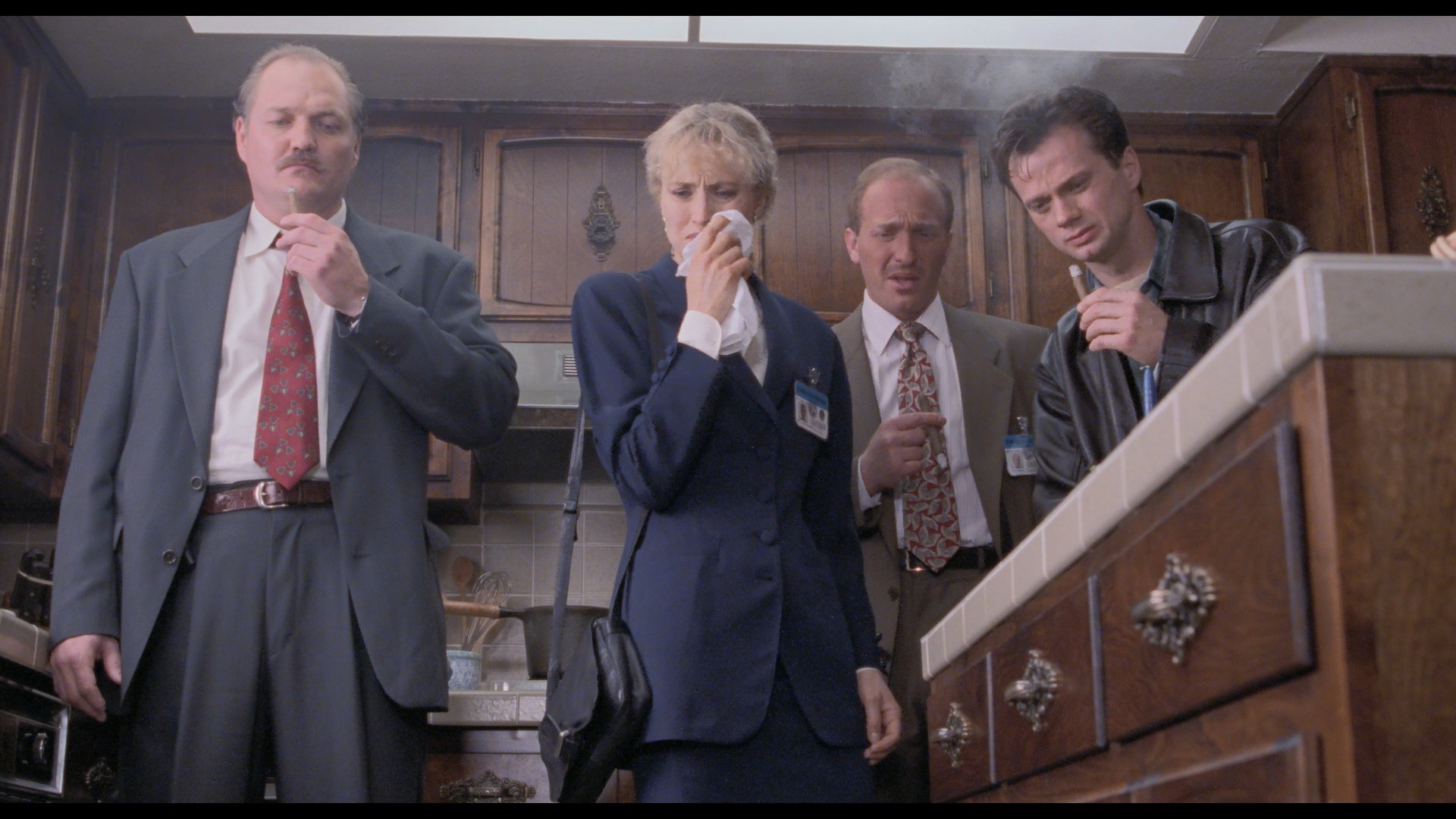 for Sam to intervene and use his own fledgling gifts to save one of the cops, Peter Harrigan (Grove). In a gesture of gratitude after the boy's father gets gunned down by a neighbor, Harrigan takes Samuel home with him and intends to drop him off at the Chatsworth Mental Institution. However, the quick diagnosis of the boy's scanner abilities and the intentions to turn him into a human guinea pig help Harrigan decide to adopt Samuel instead and, along with his wife, raise the child as his own son. Years later and with his powers kept under control by daily doses of ephemerol, the young scanner now known simply as Sam (Quinn) graduates from the police academy and becomes an L.A. officer, much to the pride of his father who's now gone up the ladder to become Commander. Meanwhile, average citizens are being driven into homicidal manias and killing police officers they imagine to be other kinds of threats, a plot engineered by the sinister Karl Glock (Lynch) and fortune teller Zena (Shepard), both of whom are surprised to see a bona fide scanner on the case. 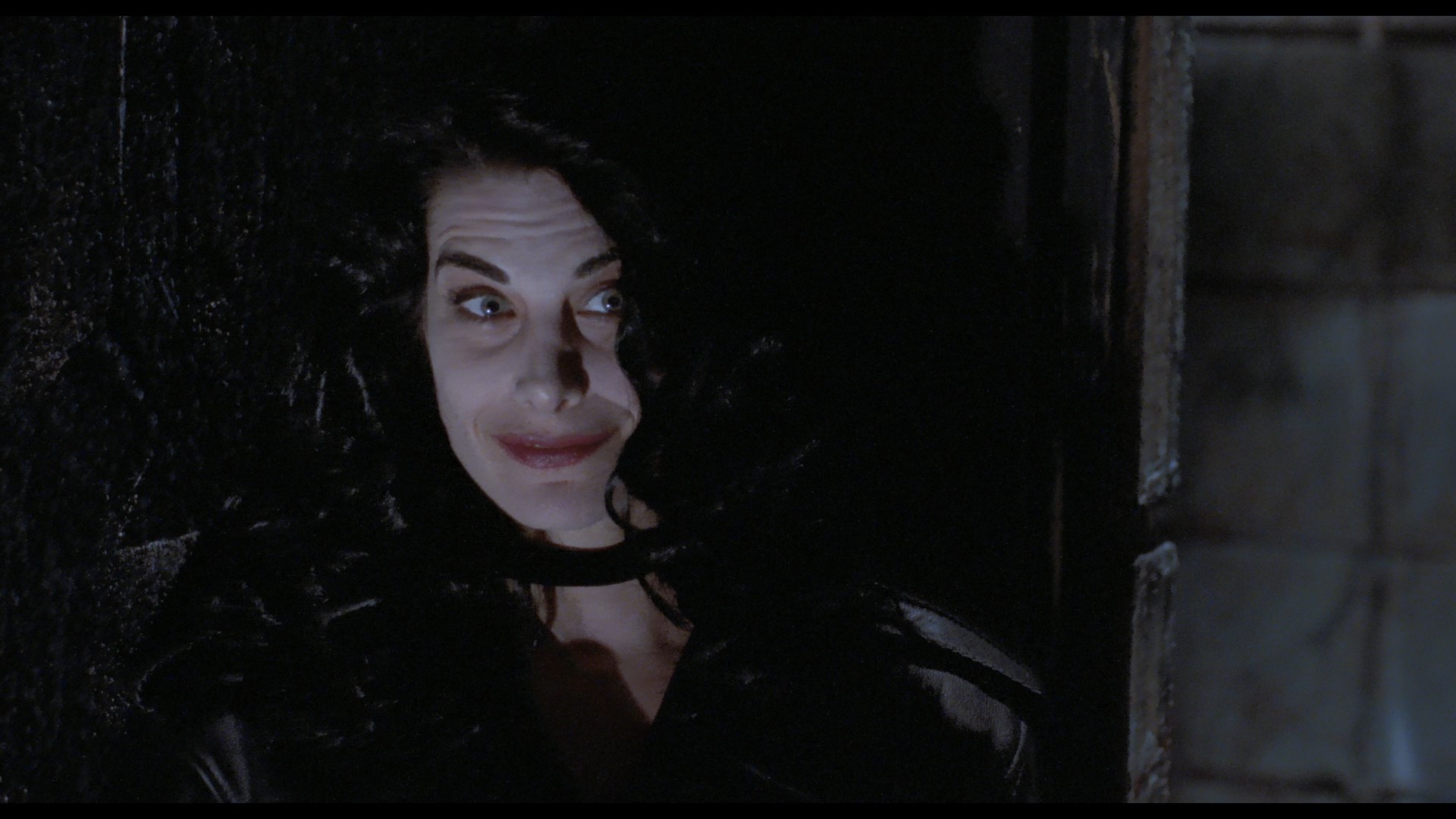 Given that both of the Scanners sequels were better than they really had any right to be, it shouldn't be much of a surprise that Scanner Cop delivers the goods as well with tons of inventive makeup appliances and some interesting 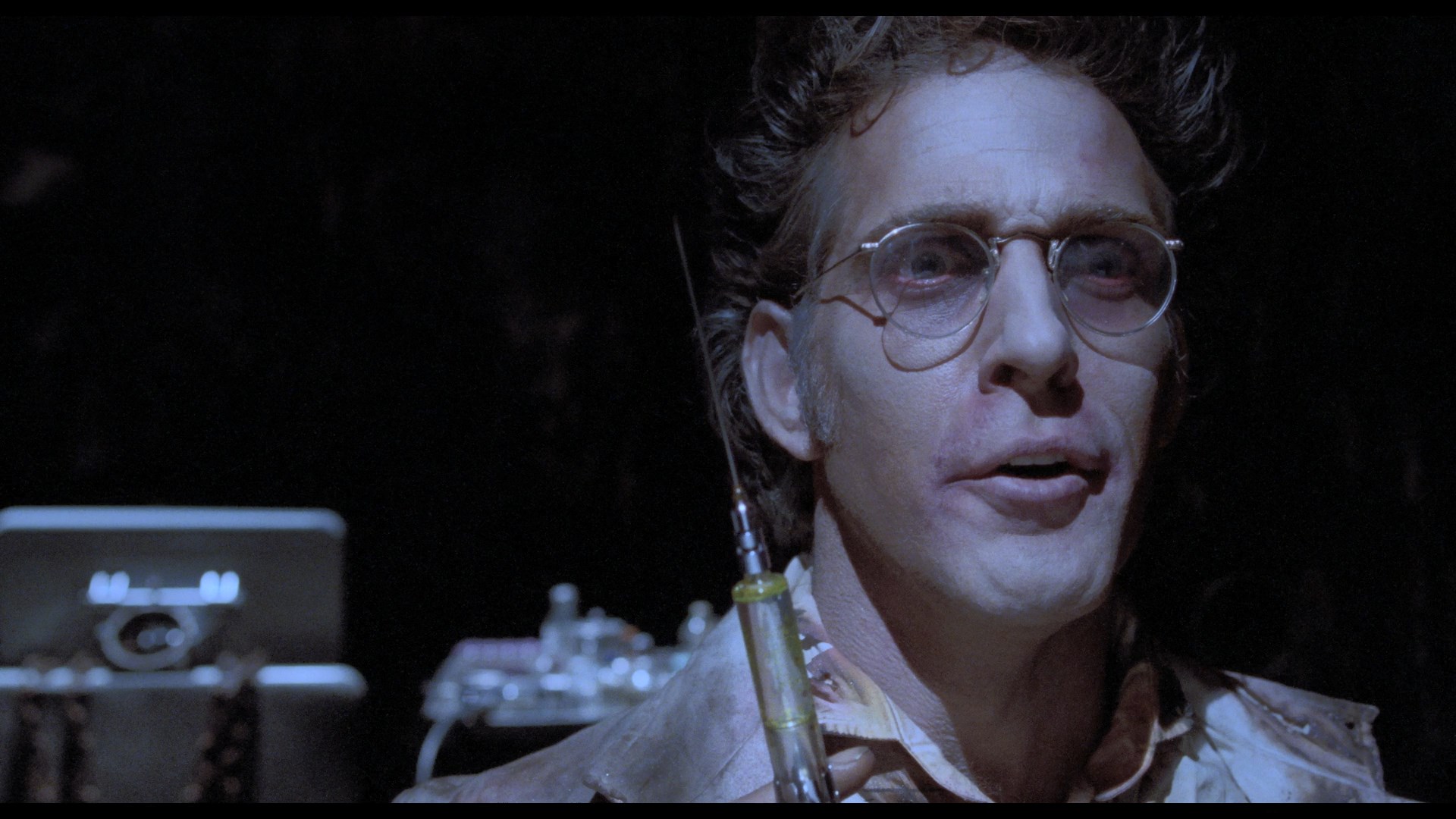 plot turns involving its sympathetic scanner hero. The heavy emphasis on the Los Angeles setting also gives it a distinctive vibe accentuated by the fact that this was made with Canadian and German financing, so it has that odd outside angle on it where everything feels just slightly off. Apart from a very drab score by Louis Febre (who did better work elsewhere and worked on this the same year as L.A. Wars!), everyone seems to be giving their all behind the camera with a slick, polished look making this several notches above the usual straight-to-video fare around that time.

However, that film was definitely outdone by its sequel that amps up all of the strongest elements in place to create a faster, gorier follow-up that should have a much bigger cult reputation. Now with the legendary John Carl Buechler on board for makeup effects, Scanner Cop II: The Showdown (or as it's actually called on screen, Scanner Cop II: Volkin's Revenge) brings back Sam, now sporting a much looser hairdo, who finds himself in the 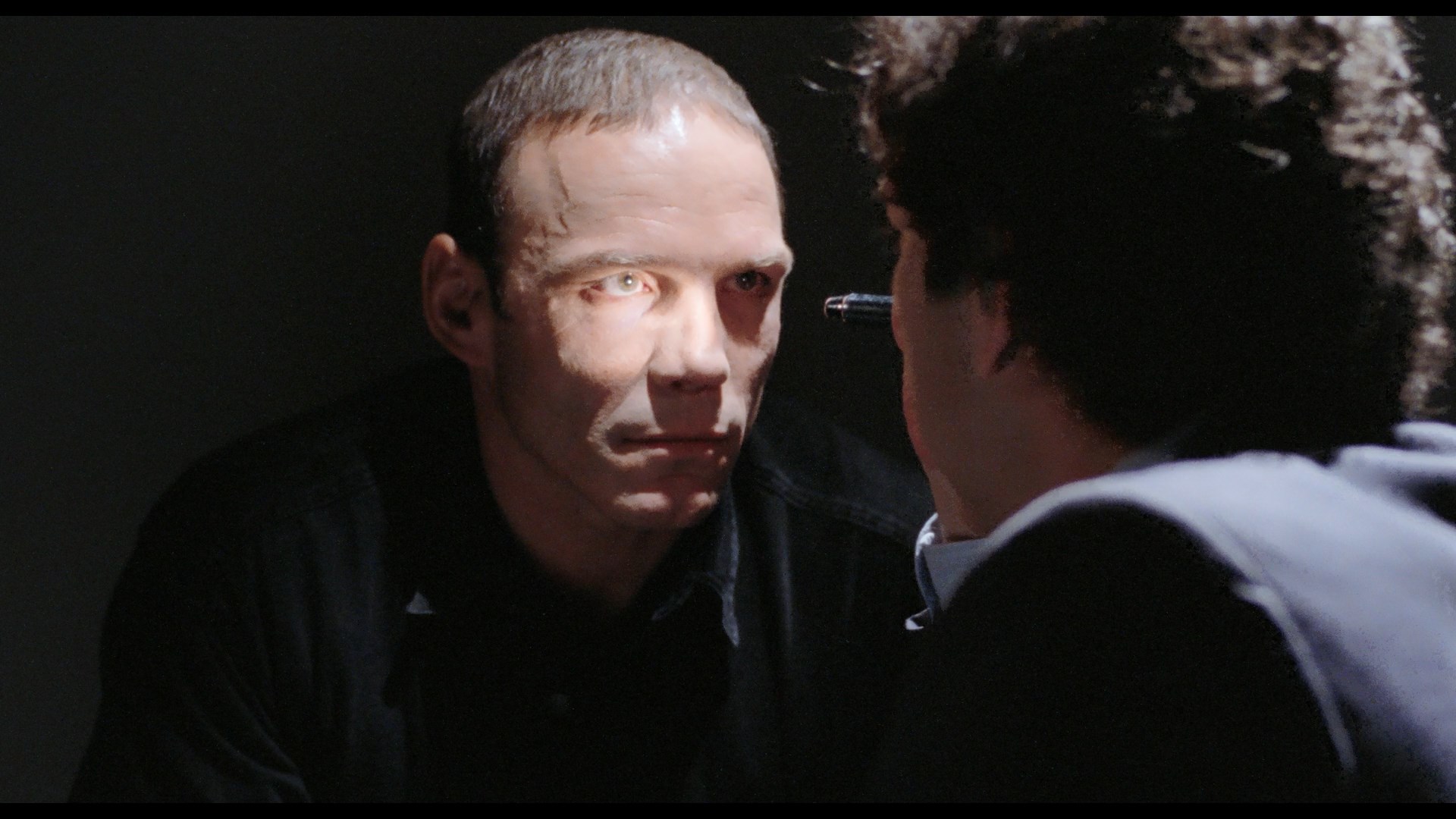 crosshairs of a deeply unstable, homicidal scanner, Volkin (The Cellar's Kilpatrick). Killing off other similarly gifted scanners to adsorb their power, Volkin vows revenge when a police 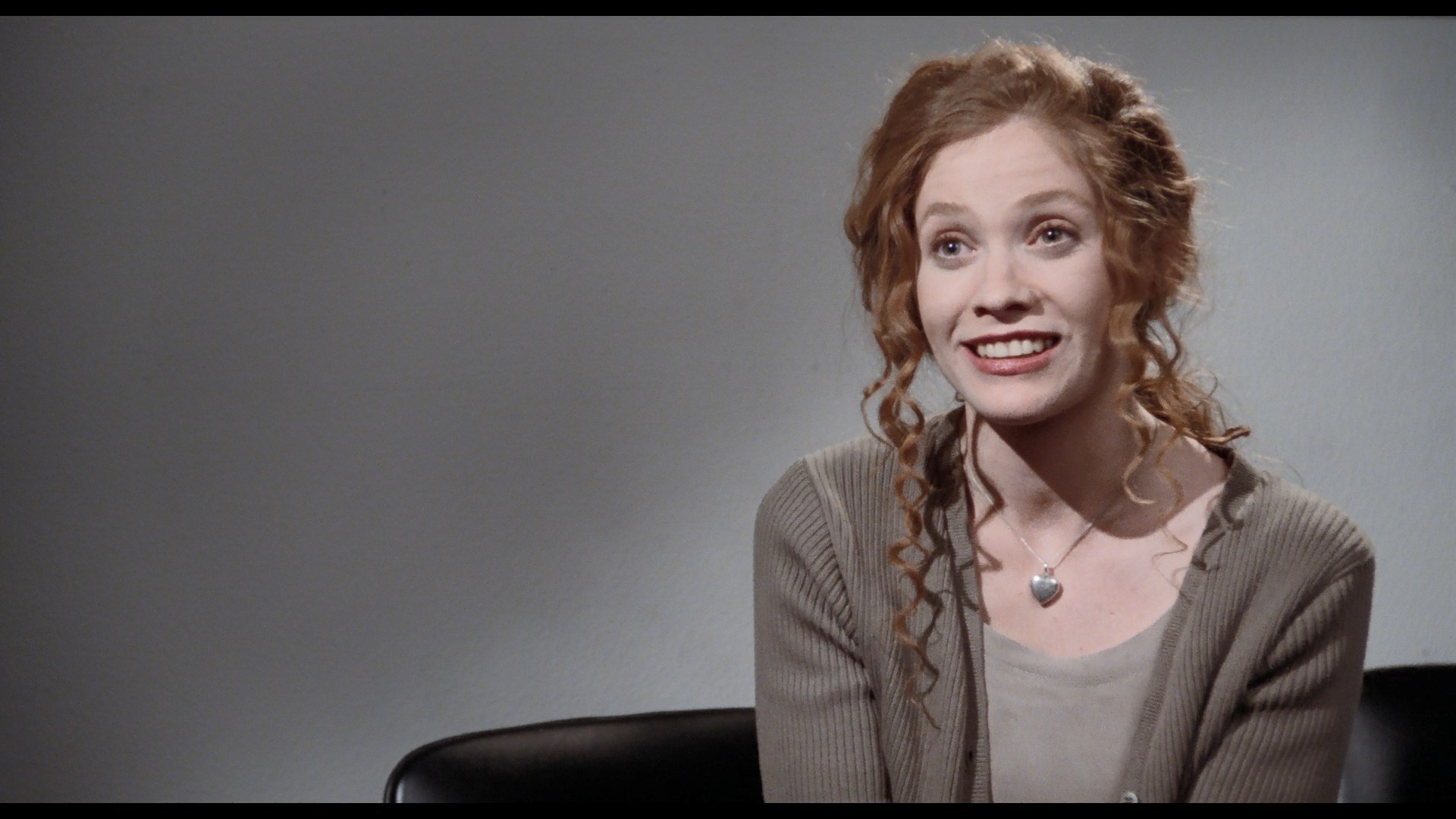 raid over a kidnapping results in the death of Volkin's brother. Able to kill other scanners and absorb their power, Volkin looks for a way to inflict the maximum amount of damage on Sam, who's working with benevolent fellow scanner Carrie (Head of the Class' Haje) to find his missing mother. Naturally, much mayhem and carnage ensue.

Loaded with gruesome scanner attack scenes and lingering, pulsating bladder effects, Scanner Cop II is one of the fastest-paced entries in the entire series and features a great villain in Kilpatrick, who manages to give Michael Ironside a run for his money in a few scenes. Also on hand is the always welcome Robert Forster as Sam's boss, and the jittery electronic score by made-for-TV vet Richard Bowers is also a significant improvement. In short, it's a really fun ride and a solid way to cap off the whole series... at least for now.

Both films have proven mostly elusive since their VHS runs apart from a Canadian DVD from Seville that paired them up from dated-looking masters. Fortunately those years of neglect have been corrected by Vinegar Syndrome, who have unleashed them together in a UHD and Blu-ray set as part of their 2021 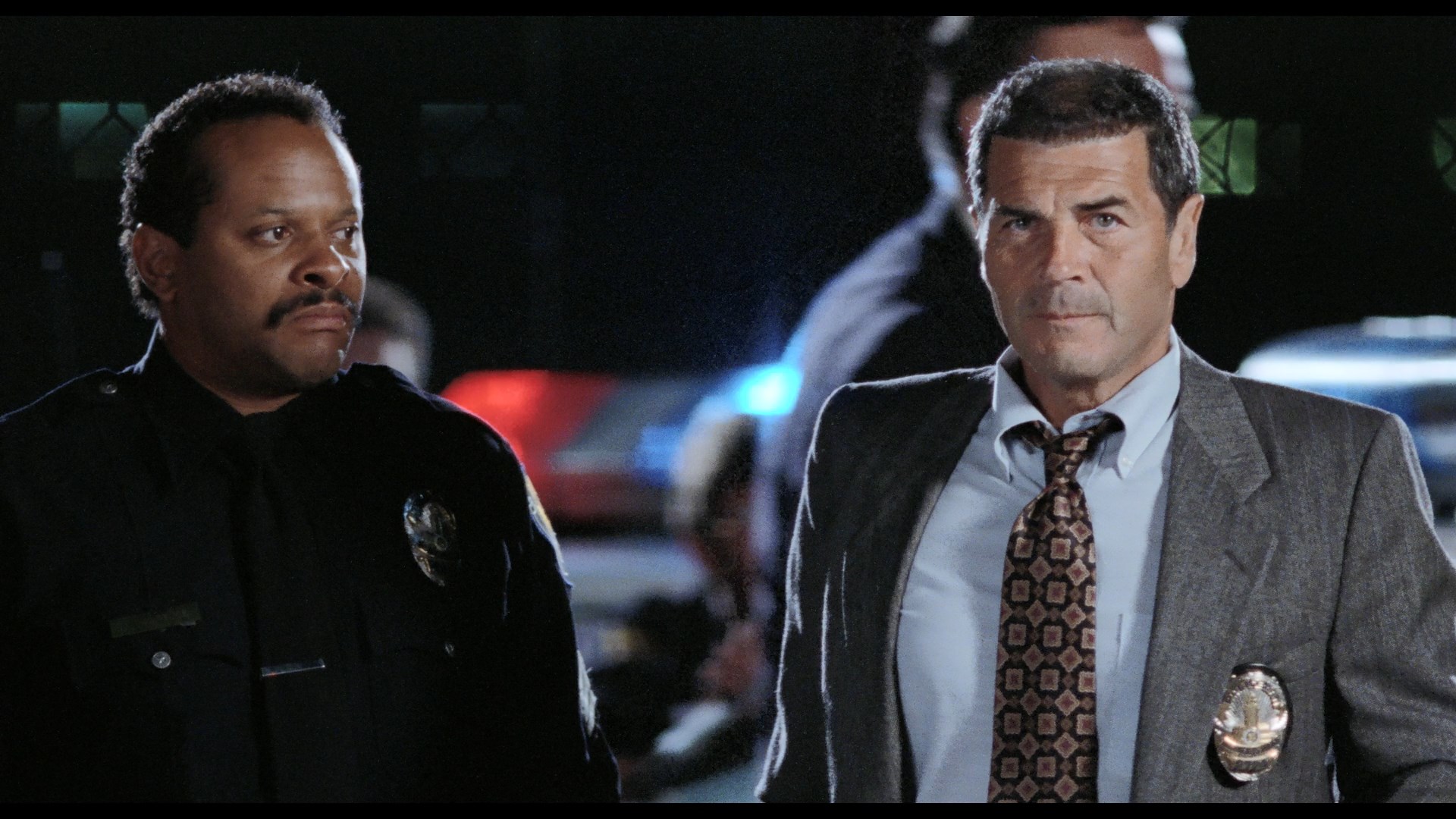 Halfway to Black Friday sale. The UHDs contain just the feature films with the bit rate maxed almost all the way out to take advantage of disc space, 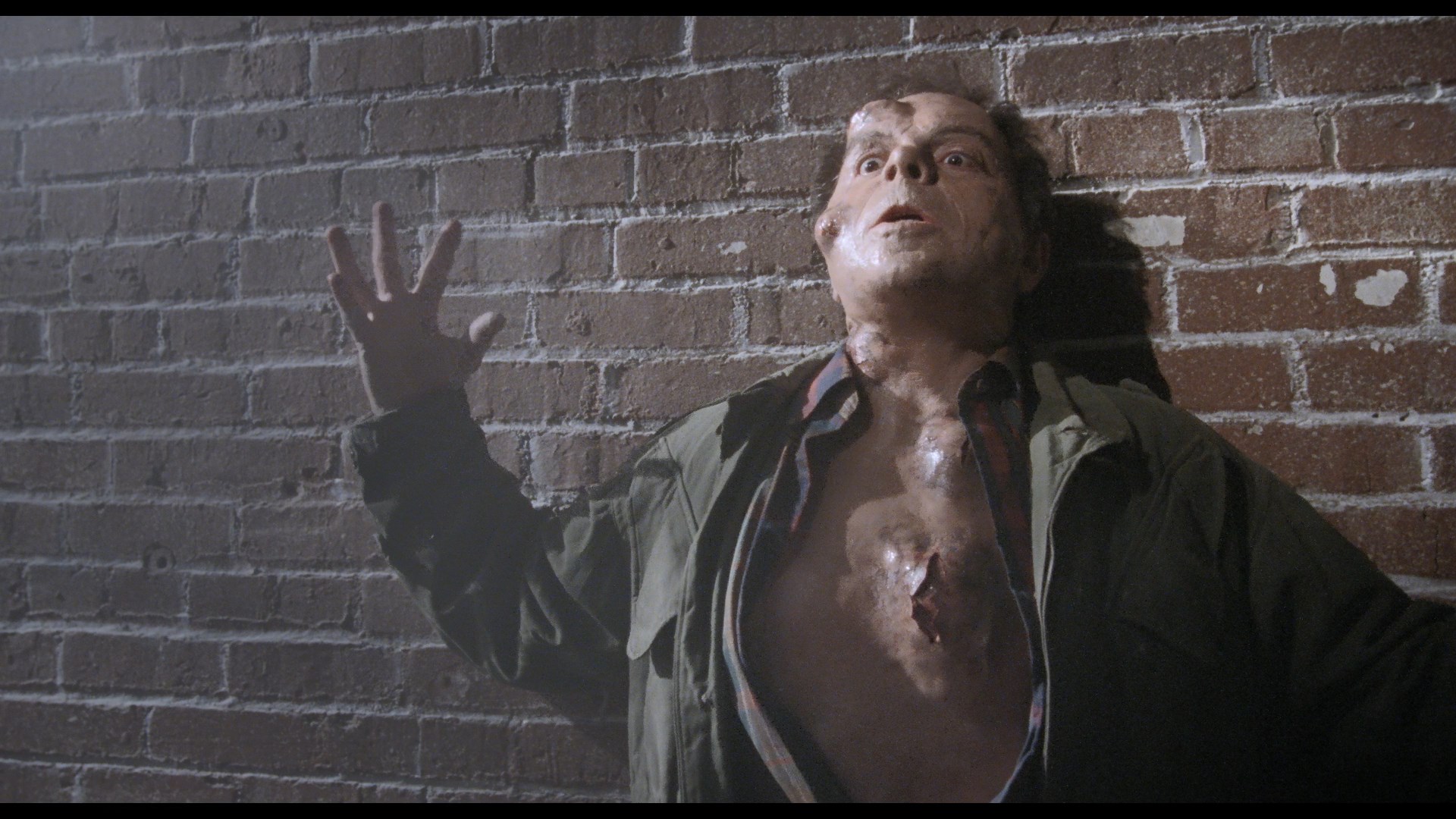 and they look absolutely gorgeous with the rich browns and reds in particular giving it a beautiful glow absent from other video transfers entirely. Both also feature very effective English DTS-HD MA 2.0 tracks replicating the Ultra Stereo mixes, which feature a surprising amount of aggressive channel separation with the music, scanner sound effects, police sirens, and so on getting a lot of rear channel activity. The 1080p Blu-ray presentations look great as well and about as good as the format will allow, but definitely opt for the UHDs as the native 4K scans really get to shine that way. Optional English SDH subtitles are also provided. A new audio commentary for the first Scanner Cop by the crew from the We Hate Movies podcast essentially riffs MST3K-style over the film with ad-libbed jokes that... well, if that's your thing, go for it. An audio commentary by Steve Barnett conversing with Brad Henderson for Scanner Cop II is a very worthwhile chat about the making of the film including the challenges of coming up with different visualizations of people getting drained to death via scanning, the narrative tweaks made to set the film apart (like having scanners be a more regular part of society), the cop action angle that appealed to him, the rationale behind not emphasizing any love interest, and the whole story behind 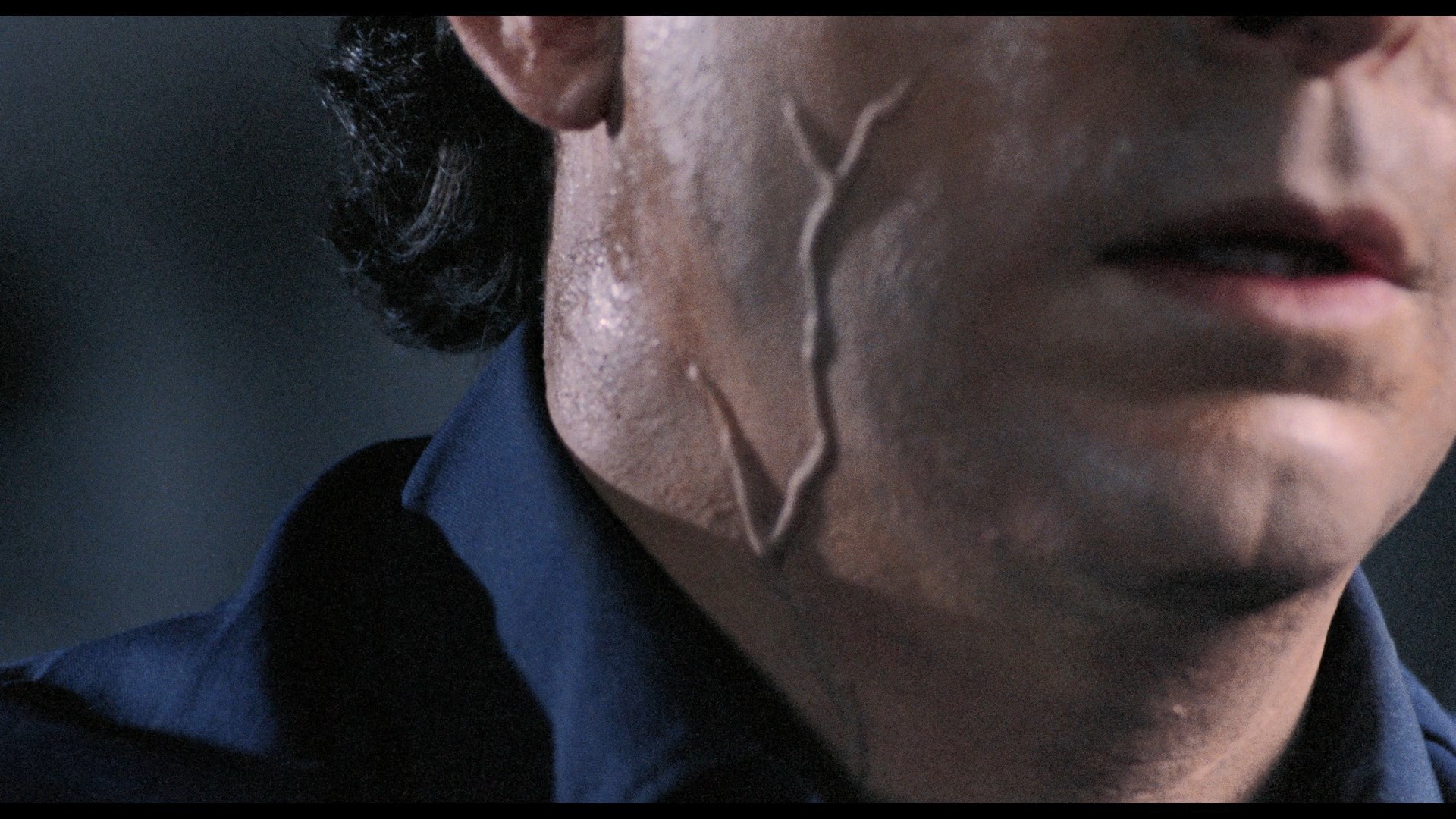 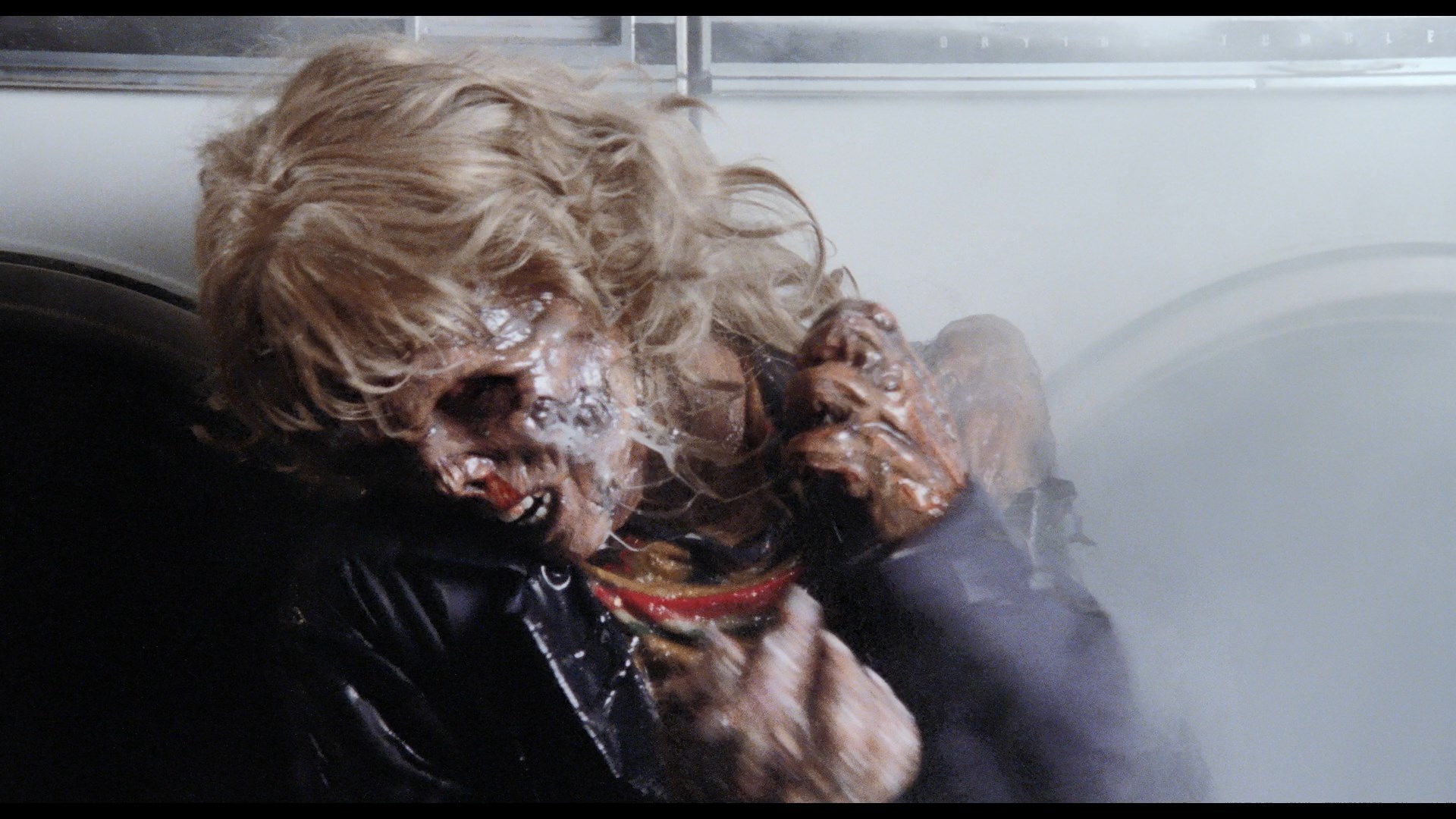 the more outre moments involving two people being zapped at once. Between the Blu-rays you get a solid two-part documentary about the films, Elijah Drenner's "Outside the Law: The Scanner Cop Revolution Part One" (22m9s) and "Part Two" (28m13s) with David, horror writer-director Simon Barrett (who's surprisingly down on the original film), Grove, Barnett, stunt coordinator Jeff Pruitt, Shepard (who says she based her look on Shakespear's Sister!), Haje, Kilpatrick, Bowers, Stephen Mendel, and special effects artists James Rohland, Tom Irvin, and Ted Haines covering tons of stories about both films from the hand-crafted makeup effects designed to rise to the challenge of the scripts to the dedication Quinn brought to his character, as well as the benefits of shooting almost entirely at night for the second film. Also included are a VHS-sourced promotional video (4m22s) for the first film hawking it to retail buyers (which will be a serious blast from the past for anyone who worked at a video store back in the mid-'90s, and hopefully someone actually tried the police siren gag they propose) and a standard theatrical trailer for the second.