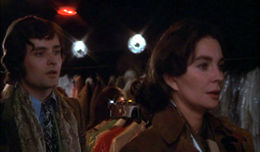 Critically dismissed upon its release, this modest '70s romantic lark now feels like stumbling on a forgotten old paperback in a stack of used books. That's not a bad thing at all; in fact, it's now a perfect time capsule and is just to sort of tragicomic romance that became so popular in theaters after the smash success of Love Story. Complete with two charismatic if unlikely leads, vibrant cinematography by the late Geoffrey Unsworth (2001: A Space Odyssey), priceless shots of early '70s London, and best of all, a killer score by Riz Ortolani (Mondo Cane) that's shamefully never been released as on its own.

Leaving her busy husband for a day shopping in the city, an unnamed middle-aged housewife (Simmons) is badgered on a commuter train by a smitten young man (Whiting) who calls her "Mt. Everest," apparently because she represents the biggest romantic hurdle in sight. She rebuffs him, but the man continues to woo her as she goes into town; through an implausible string of events, they eventually come into contact with her mother, his parents, and a few other colorful characters before their age difference becomes a negligible problem and sparks begin to fly. But does their fling stand a chance of lasting after she has to return home? 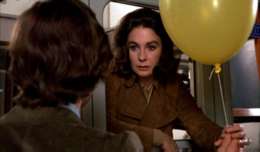 One of the most beautiful actresses to ever grace Hollywood, Simmons had been acting since her teen years (most notably in Great Expectations and was already a big star at the time of filming after such classics as Elmer Gantry and Spartacus. Unlike most of her peers, she remained steadily busy throughout the emergence of the New Hollywood revolution in the early '70s and never humiliated herself in any "hip" projects. However, her dramatic choices seemed to veer toward women grappling with the increasingly suffocating nature of marriage, first in Richard Brooks' fascinating The Happy Ending and then again in this interesting May/September character study. Meanwhile Whiting was still a hot property after winning over millions of teenage girls by starring in Franco Zeffirelli's Romeo and Juliet in 1968. The decision to put these two actors together starts off shakily in tht first few scenes as Whiting's character (who also remains nameless) comes off as both a stalker and a really abrasive ass, but fortunately he settles down and becomes much more sympathetic as the film glides along. On the downside, director/writer Alvin Rakoff and co-writer Peter King are the real weak links here; the script is predictable and barely above soap opera level, while Rakoff doesn't 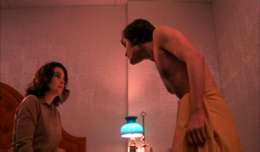 show much more flair than might be demanded from an average made-for-TV movie. And yes, they even end the story with a big tearjerker scene at a train station, but it's still no Umbrellas of Cherbourg. Luckily other cohorts behind the camera pick up the slack and deliver enough to make this a solid viewing choice for a slow Sunday afternoon, particularly if you have a weakness for early '70s glossy European cinema.

Say Hello to Yesterday was released by Cinerama in the early '70s and barely caused a ripple, eventually surfacing for occasional TV airings and a truly awful VHS release from Prism in the '80s. Scorpion's release is on par with the excellent transfers found on their other Cinerama titles like Girly and Goodbye Gemini; colors are rich and often stunning, while Simmons' close-ups practically radiate off the screen. The mono audio also does justice to the wonderful score (easily the strongest aspect of the film now), whose main theme gets a good workout in a number of different permutations. Extras include the original theatrical trailer and an audio commentary with Rakoff moderated by Tony Sloman that covers the bases of the film's creation, including the director's leap to big screen filmmaking after TV, the casting process of bringing the leads together, and the challenges of mounting a script in which none of the characters have names! All told, despite some dramatically questionable moments, this film plays far better today than it did for audiences at the time; a pure pop culture guilty pleasure if there ever was one.