A female Jekyll and Hyde story for the swinging lounge set, Satanik (or as the American title card reads, Satanic) loosely adapts a semi-popular European comic with a few commercially viable splashes of blood, nudity and crime. 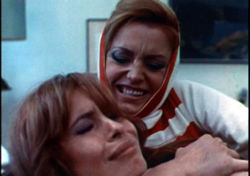 Unlike the traditional superheroes populating American comics of the period, this is dark, morally dubious material, essentially in the same vein as supernaturally tinged graphic novel teases like Valentina and Barbarella.

Old and scarred Marnie Bannister (Magda Konopka) thinks her best days might be behind her, at least until a colleague demonstrates a new genetic formula capable of regressing the age drive in organisms, albeit with psychologically destructive results. Naturally the old biddy takes a gulp of this youth potion and turns into a sultry blonde vixen, the perfect vehicle for luring in wealthy men and stripping them of their fortunes. Unfortunately her first victim, George (giallo staple Umberto Raho), catches her mid-transformation and winds up sliced to bits for his trouble. Flip-flopping between appearances thanks to her handy potion, she dons a number of outrageous mod outfits, performs a criminal striptease in a body-hugging black outfit, and eludes the police looking for a homicidal old woman. 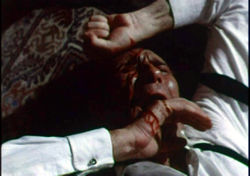 As with some other Italian exploitation titles of this vintage, Satanik feels deeply conflicted about its attitude toward women, almost pathologically so in this case. While Konopka is a ravishingly beautiful woman, the film coyly avoids any extended nudity and seems to trade in the weird charge of watching her face going through various stages of decay and restoration. Then there's the trademark "poetic justice" ending which wraps things up with that laziest of judgmental story devices, a handy car crash. (See Come Together for an even more outrageous, blatant example of puritanical automotive mayhem.) 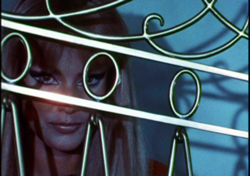 If you ignore the strange sexual undercurrents, Satanik at least delivers a modicum of thrills thanks to its groovy music score, some isolated striking images (the aforementioned stage show in particular), and enough bizarre shifts in tone to keep even Italo-sleaze veterans scratching their heads.

Retromedia's bizarrely designed packaging doesn't really represent this film, from the misleading "booga-booga" satanic cover to the back copy by Mirek Lipenski, which was probably good at some point but fell victim to the worst copy-editing disaster in the format's history. The colorful transfer is a bit of a step up from the PD prints circulating on VHS for years, though the fullscreen image is still grainy. The cropping from the original theatrical aspect ratio poses problems in a few shots, though the reported 2.35:1 framing of some sources appears questionable; only a marginal amount seems to be missing (and the title cards look fine), so this may have been 1.85:1 originally. Sound is mediocre but tolerable as well. The only notable extra (and it's a doozy!) is a gallery of Satanik comic book covers, representing the title character in its male and female incarnations.