Katja has a really big problem. Her widowed dad Eric spends too much time away on business, and whenever he gets home, she gets just a little bit too excited to see him. Katja isn't crazy about the idea of having a babysitter, especially if it's his older galpal in a bad wig, Svea, whom he's secretly doing on the side. When daddy announces he's getting married, Katja's shaken out of her daily routine of wandering the streets in deep thought and retreats to a strangely butch art teacher, Lena (Henningsen), to forget her troubles. Going to art classes and doing nude studies under the supervision of a strangely mannish female art teacher helps a little bit, but when Katja catches Lena in the sack with one of her models demonstrating the joys of sapphic love, our heroine just gets more confused. Katja then decides to pick up a boytoy, Lars, and pass him off to everyone as her oddly young father in public. Though Katja and Lars are happy for a while sitting around eating Corn Flakes and listening to LPs all day, her psychological issues eventually force her to find an even more perverse solution to her incestuous problems.

One of the most notorious films in director Joe Sarno's filmography, Daddly Darling is one of the key films from his Scandinavian softcore period and was his first film to get slapped with an X rating (though it's easily within R territory now). The come-on ad campaign highlighting the incest angle really doesn't sell the film well, as the subject is actually handled in an unusual and surprising manner with Katja and daddy only hooking up in one oddly compelling fantasy sequence. The direction and acting are all up to Sarno's usual standards, with the fascinating Louise (a cute Ewa Aluin lookalike who reputedly worked in Danish and UK stag shorts on the side while building a mainstream career) easily holding the viewer's attention even when she's behaving very, very badly. Wild Strawberries' Petré manages to overcome her ludicrous hairdo and deliver the most accomplished and nuanced performance in the film, and her key role in the finale is very nicely handled. Sarno fans will immediately recognize his trademarks

Though it received better distribution than many Sarno films in the early '70s before hardcore killed off the market, Daddly Darling fell into neglect for years afterwards and was rarely seen. VHS editions from Something Weird, Electric Video and Alpha Blue popped up in the '80s, all severely cropped on all four sides with almost no color and littered with print debris, but it was better than nothing. The Seduction Cinema DVD release is obviously a huge step up from past versions for a number of reasons, though as the packaging and the disc itself take great pains to point out, pristine elements of this film no longer exist. The transfer here certainly has its share of hairline scratches, but the color fidelity is far more accurate and satisfying than ever before and the correct framing restores a considerable amount of punch to the film's emotionally resonant compositions. No, it isn't pristine, but fans should be happy at least to finally see a viewable version. The mono audio actually sounds very good, with the all-important music score carrying a surprising amoung of oomph throughout. Extras include a very thorough liner notes booklet by Sarno scholar Michael J. Bowen (who covers the ten-day shoot and the sketchy distribution history), a new video interview with Sarno, Peggy Steffans and producer Kenn Collins (covering the Danish shooting and the logistics of the love scenes), and the usual array of Seduction-related Sarno promos and restoration demonstrations.

One of the most widely circulated films from Joe 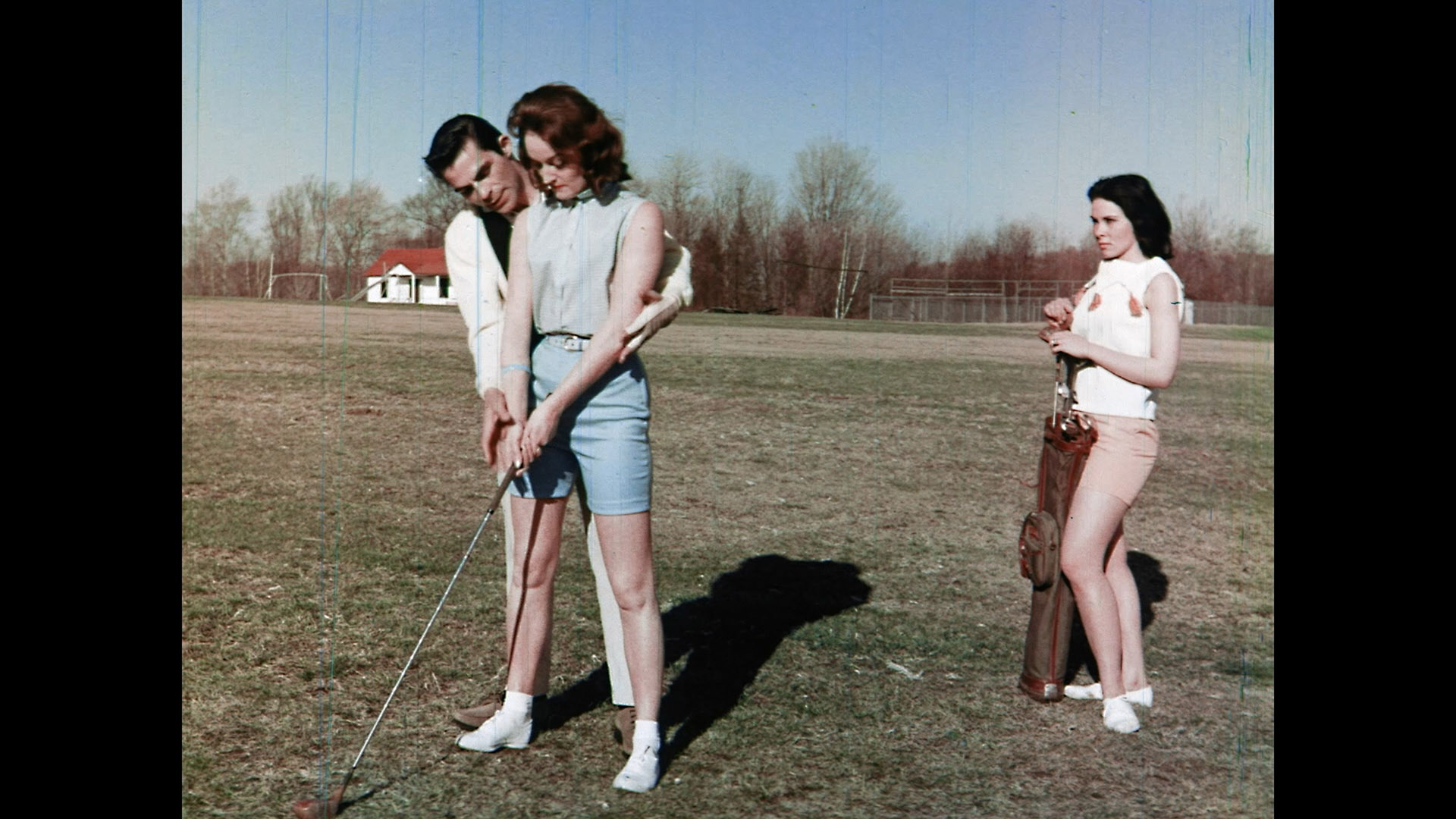 Sarno's glossy attempts at exposing the seamy side of the American middle class (see Sin in the Suburbs, et al), Moonlighting Wives is a vaguely tawdry but accessible slice of lounge-era pop culture disguised as a sex film (without much actual sex, but we'll get to that). Joe Sarno and the film's original press materials claim this was based on a real news report of suburban housewives running a prostitution ring out of their houses, eventually evading their arrests by hanging on to dirt about their powerful clients. (The film supplies a more somber, albeit unrealistic, outcome.) The scandal starts when pouty but determined Joan (Vivienne) gets sick of her boss' sexual advances and her husband's constant badgering about her spending habits, so she sets up her own stenography business that doubles nicely for selling out sexual favors from her married friends. Pretty soon 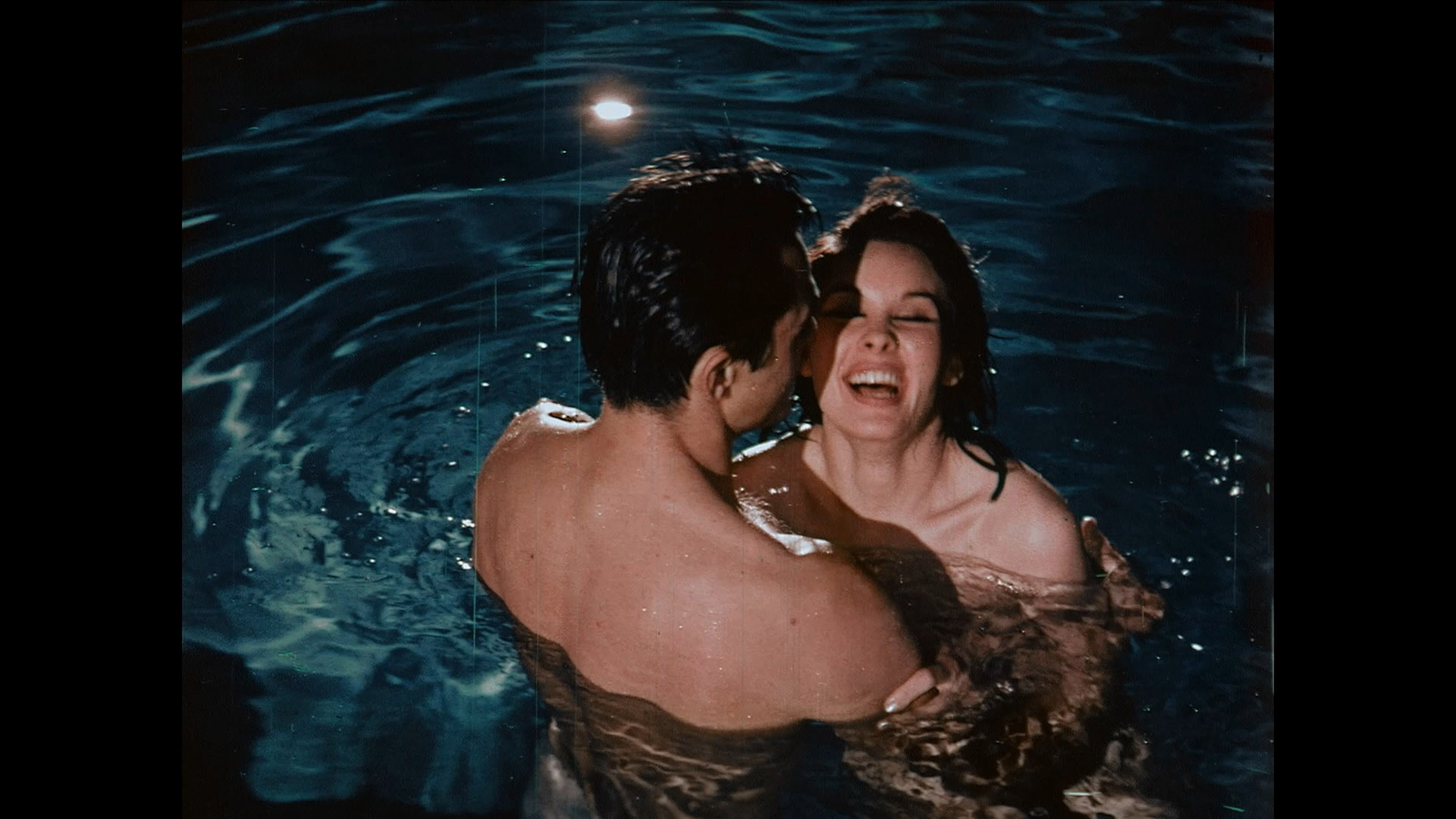 One of Joe Sarno's earlier color films, Moonlighting Wives already shows him at ease with splashing vivid, expressive hues across the screen as he composes each of his characters in a succession of shots right out of a Julie London album cover. The lustrous approach here, coupled with the interesting and unpredictable screenplay, manages to compensate for the lack of skin on display (with some scantily-clad partiers at the end coming closest); it's a perfect textbook example of Sarno's psychological approach to erotica. All of the performers turn in above-average performances, with Vivienne (a.k.a. Tammy Latour from Sarno's My Body Hungers) doing an excellent job of portraying a beautiful yet strangely aloof and ultimately ruthless woman. Add a wonderfully randy theme song, this is pure guilty pleasure territory for anyone with a strong erotic imagination. 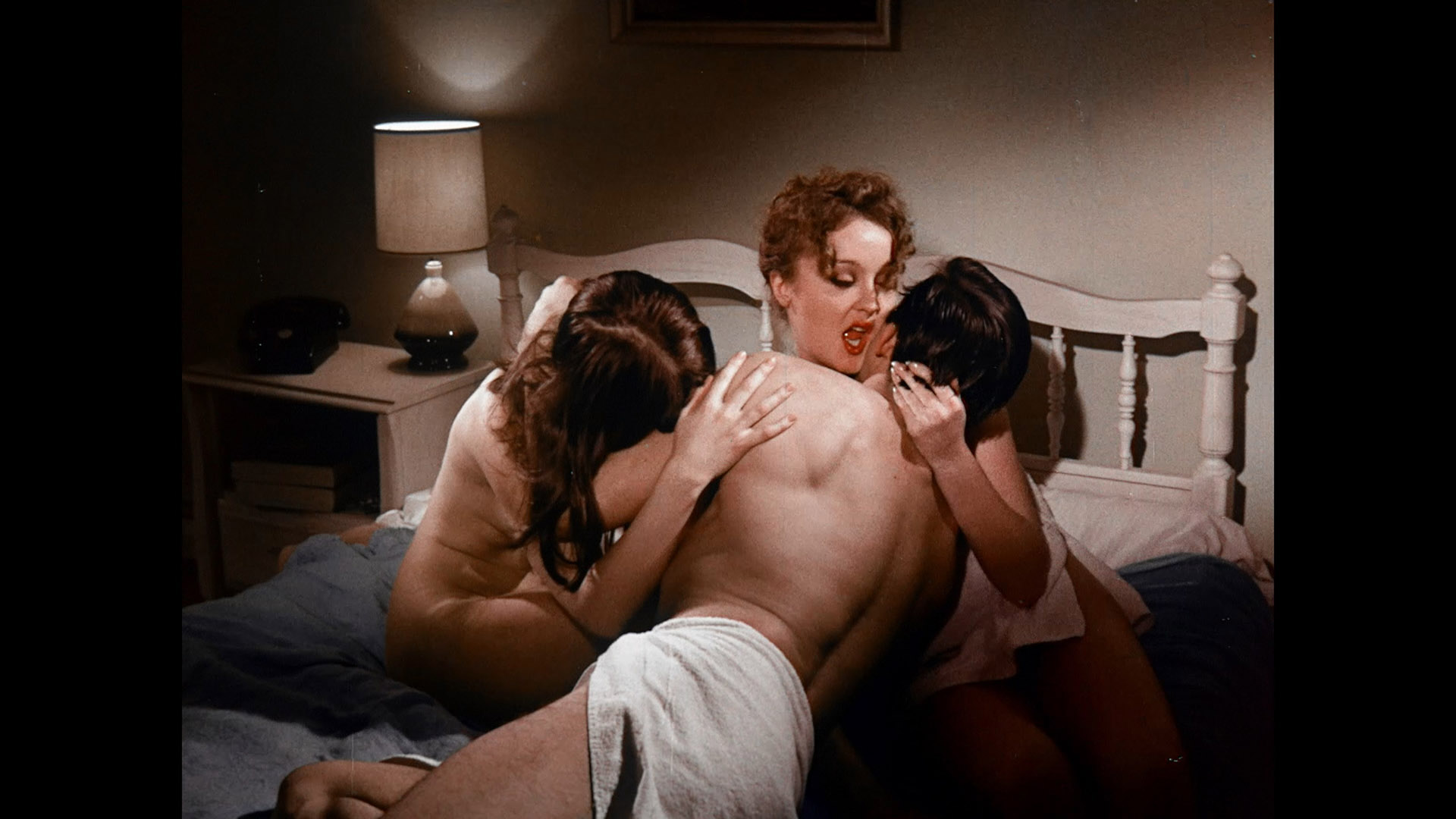 Moonlighting Wives circulated for decades on the grindhouse circuit and popped up in the early days of Something Weird in a faded, battered print that barely did justice to Sarno's color schemes. Unfortunately its frequent use meant that most prints were demolished in the process, making this very close to a lost film. This DVD edition presents about as close to a pristine version as possible under the circumstances; as the restoration version demonstrates, even the best surviving print had turned red and was littered with damage. Many scratches still remain, but the color has been returned to its much-needed original intentions. (Unfortunately, that irritating Seduction Cinema logo pops up briefly every fifteen minutes or so; please cut it out, guys!) Sarno pops up for a video interview in which he discusses the making of the film and discussing his career at that time; it's pretty brief but interesting (with mention of some unusused spicier footage that no one ever saw) and makes a fine companion to his other commentaries and interviews for the company's recommended releases, which are represented here with promos for the likes of Abigail Leslie Is Back in Town (see below). 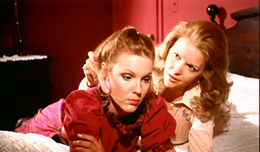 its model in every respect.

The film opens in the seaside village of Bay Point, where married Priscilla (Brooke, a.k.a. Mary Mendum from Radley Metzger's The Image) takes a forlorn stroll on the beach after learning that hot-to-trot Abigail Leslie (Nicholson) has returned. Priscilla fears that Abigail will do a repeat performance of her roll in the sack with Priscilla's husband, Gordon (Gillis), an anxiety increased when Abigail starts seducing everyone in sight, regardless of gender. Another option appears in the form of Chester (Edwards), a nice-guy fisherman whom Priscilla often encounters during her walks, and soon sexual experimentation doesn't seem like such a bad choice for the distraught housewife.

Graced with excellent performances, striking cinematography, and a potent acoustic score, Sarno's sex-laced drama (whose titles is spelled at least three different ways between the print itself, the advertising materials, and the DVD packaging) is one of his finest achievements from the 1970s. All of the actors were culled from the stable of New York's hardcore performers and really get to show off their acting chops here; most of the sex scenes crop up in the final act of the film to provide the maximum emotional impact, and it's clear everyone enjoyed the opportunity to infuse some craft and emotion into their work. Though Brooke gets most of the juicy moments with her fragile, deer-like experessions, the rest of the cast shines in various capacities. Nicholson, 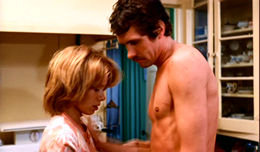 Most "lost" films recovered via DVD tend to look a bit compromised due to their rarity, but there's little room for complaint with this transfer, culled from the 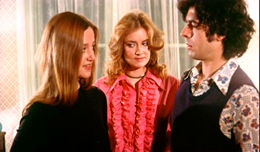 only print available in Sarno's own collection. The colors have miraculously remained intact and look perfect here, while damage is so minimal it's not even worth noting. The mono audio also sounds fine. While the negative may never be recovered, this is a perfectly acceptable option. Extras are a bit hit-and-miss, with Sarno, biographer Michael Bowen, and eiCinema head Mike Raso contributing an interesting chat sometimes overwhelmed by the odd audio mixing, with background audio frequently muffling the comments. It's not as lively as Sarno's chats when accompanied by his wife, Peggy, but completists will still find some good nuggets of info here. Viewers may actually glean a lot more from Bowen's accompanying liner notes, which lay out every bit of the film's history with astonishingly thorough detail. Mr. and Mrs. Sarno do turn up together on another extra, a six-minute interview discussing the shooting locations and actors in brief but satisfying detail. The usual hefty assortment of the company's Sarno trailers rounds out the disc, one of the most gratifying Sarno releases to date and a must for anyone appreciative of a well-crafted, dynamic reminder of how sexy cinema can be.