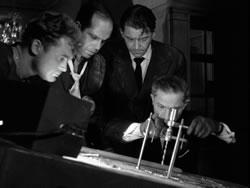 The unqualified blueprint for all modern heist films, Rififi is one of the pivotal foreign films of the 1950s and is arguably the most influential of them all given the number of times it's imitated every year by Hollywood. Blacklisted director Jules Dassin hadn't made a film for almost five years after leaving Hollywood, but his experience as one of the major players of 1940s film noir with titles like Brute Force, Thieves' Highway, and Night and the City made him the ideal person to invigorate European cinema with an exciting heist film that made the planning and execution of the big job the central focus of the story. 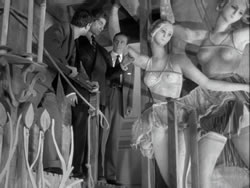 After serving time and refusing to rat out his best friend Jo (Carmen, Baby's Mohner), world-weary Tony (The Devil's Nightmare's Servais) is asked to participate in a new jewelry store heist. At first he refuses, but after personal setbacks he changes his mind and decides to head an infiltration of the jewelry safe with Jo, Mario (Manuel), and Italian safecracker Cesar (a pseudonymous Dassin) . The plan seems to go perfectly, except for a little temptation for one of them that could bring them all down in the aftermath.

Not just a pitch-perfect heist film, Rififi is also one of the finest evocations of mid-20th century Paris captured on film. The rich atmosphere, whip-smart dialogue, and evocative score by the great Georges Auric (whose music vanishes for the famous, dialogue-free heist) make for a heady experience not soon forgotten, with some surprisingly daring touches for 1955 including Tony savagely belt-whipping his unfaithful girlfriend and some blatant near-nudity underneath a see-through nightgown. The film became such a success for the then-impoverished Dassin that he became an in-demand director once again, creating an international smash hit again in 1960 with Never On Sunday and poking fun at his heist classic in 1964 with the splashy Topkapi. 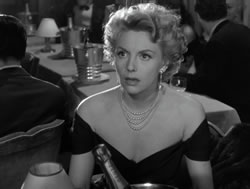 A longtime victim of presumed public domain status like many of its foreign classic brethren and subjected to countless lousy unauthorized VHS releases, Rififi had its original luster restored when Criterion issued a licensed, remastered version on DVD containing a half-hour video interview with Dassin, production design art, production notes, and the trailer, with Australia's Madman recycling most of the those extras for a strangely converted PAL release.

A far superior HD rendition of the film bowed on Blu-Ray first from Gaumont in France, albeit without English-friendly options; this one includes the trailer and a half-hour documentary about Dassin. However, the most thorough and satisfying option by far is the excellent Region B Blu-Ray from Arrow, which contains the same excellent, razor-sharp transfer (now with slightly better definition in the film grain and background details) and, thankfully, optional English subtitles. Extras for this version include the Dassin interview along with new material including a long (24 minutes!) video intro by film writer Ginette Vincendeau, a 37-minute Dassin panel chat at the BFI, the trailer, the usual reversible cover art options, and a liner notes booklet with contributions from director David Carins, film scholar Alastair Phillips, and older notes on the film by Francois Truffaut and John Trevelyan. If you have all-region Blu-Ray capability, there's no excuse whatsoever for missing this one, and even if Criterion gets around to it later, the lack of overlap in the extras department (as with Diabolique) ensures this will still be a recommended library title.