Back in the early days of VHS when Mom 'n' Pop stores sprouted up like mushrooms in every community large and small, horror movies became big 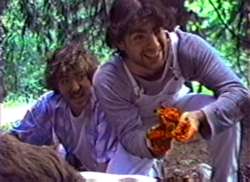 business and had the big studios quivering with their ability to scare up huge profits with little investment. Soon enterprising filmmakers were making the boxes bigger, brasher, and more gimmicky by the minute, complete with coverboxes sporting loud voices, squishy liquids, and glowing eyeballs. Of course, all this showmanship was meant to camouflage the essential cruddiness of the contents within, leaving horror hounds scraping through countless hours of brain-deadening dreck to find the occasional diamond in the rough. One additional advantage of VHS was the opportunity for anyone with a camcorder and rudimentary editing equipment to churn out a quickie splatter film and pass it off alongside those big 35mm slasher epics, a trend kicked off with the infamous Boarding House and carried through with such eyeball punishments as The Ripper, Gore-Met Zombie Chef from Hell, 666, 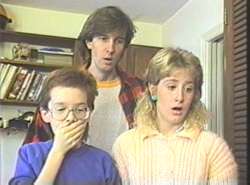 and the indisputable masterpiece of this sub-sub-subgenre, Black Devil Doll from Hell (which is still inexcusably absent from the DVD marketplace).

Why the rambling history lecture, you ask? Well, you need some context to help explain the existence of Camp Video, an indie VHS label specializing in shot-on-video gorefests from the most remote regions of the United States. None of their output could ever come within spitting distance of being called "good," but as a case study in regional horror filmmaking during a unique period in history, they are instructive lessions in do-it-yourself gumption, albeit of wildly varying entertainment levels.

First up and perhaps the most notorious due to its ultra-graphic cover art, Cannibal Campout is sort of an even-lower-rent version of Don't Go in the Woods by way of Mother's Day, focusing on the exploits of a bunch of depraved, forest-dwelling cannibals 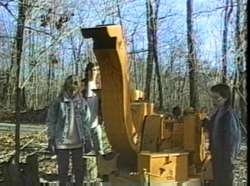 Shot on weekends in the woods with an amateur cast, Cannibal Campout may be the most gruesome home movie ever made. The acting's awful, the photography is on par with work by your drunk uncle, and the production values are zilch, but that's really part of the charm; if Troma feels too slick and glossy by far, this should easily do the trick. As with most cannibal movies, this is also a sick comedy as well, and on that front it works a bit better. McBride is also on hand with this DVD to explain the existence of his film, thanks to a full audio commentary and a half-hour featurette reteaming most of the cast. Everyone seems to remember the experience well enough, and while it didn't launch any big careers (though McBride apparently got some sweet music video gigs), the movie still has a warm place in the hearts of many diseased children of the '80s. Other extras include a trailer, promos from the "Camp Trailer Vault" (see below), a few minutes of boring deleted footage, a ridiculous music video, and a still gallery. 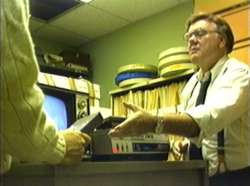 Unfortunately, McBride didn't fare quite as well with his next film the following year. Despite the title, Woodchipper Massacre avoids bloodshed in favor of attempted dark comedy. Yes, a couple of people do wind up in the titular machine, but it's all done offscreen and played for yucks, which probably isn't what the target audience expected. Basically it's another one of those kids-kill-and-no-one-believes-it story as three siblings -- Jon (McBride), Denise (Edeal) and Tommy (Casiello) -- kill off their overbearing aunt (played by the director's mom), then are forced to slay again when their inventive body disposal sends more people sniffing around.

Rambling, goofy, and pretty inexplicable, Woodchipper Massacre would probably never see the light of day in today's video climate; angry renters would probably start chucking copies at the windows of Hollywood Video if its show-no-gore stripes were exposed now. However, it somehow managed to become a mainstay on many shelves near the end of the '80s, and its portrait of bored Connecticut kids cutting up in front of the camera has a certain horrid fascination if you're in the right frame of mind. As with its companion film, this was actually shot on VHS and still looks it, with obvious dropouts and some tape wear visible at the bottom of the screen; however, the transfer is still crisper than the old tape version, and it's hard to imagine it looking much better. The low-fi audio is still about on par with what you'd expect from an '80s camcorder. Again McBride chips in with an ingratiating commentary track covering all the details ranging from the cast to the intentions behind the film, which helps explain why he took the approach he did. Also included are an on-camera interview with McBride and a new featurette with the various actors, all of which make you admire the chutzpah behind its creation even if the finished result can wear on the nerves pretty quickly. The usual trailers are included along with a gallery and an insert containing brief notes by McBride. 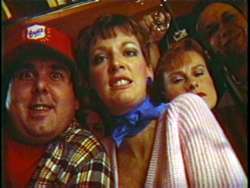 Switching gears now, one of the most prevalent "big box" VHS titles on the indie horror market, Video Violence follows the mishaps of the Emerys, a couple from the Big Apple whose relocation to New Jersey and establishment of a video rental store puts their lives in peril. Several tapes fall into their hands depicting a series of gory snuff murders, and their sniffing around to discover the source of these literal video nasties pits them against the entire town, whose collusion with a pair of psychos, Howard and Eli, holds the key to these illict home projects. 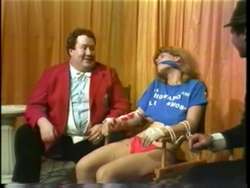 Carrying the theme to an absurb conclusion, Video Violence 2 goes for flat-out gore comedy as Howard and Eli return as the hosts of a public access program packed with random murders and ghoulish humor. Mostly a series of Laugh-In-style sketches, the show trots out various tortures, executions, and other atrocities, executed with thankfully phony effects and a minimum of genuine sadism. What's the story behind the show, and are the actors really being snuffed before a live studio audience?

Though both concepts sound like pretty good hooks for low-budget horror, be aware that the Video Violence films are once again shot on super-cheap consumer cameras from the '80s and certainly look it. The acting sticks to junior high mugging level for the most part, 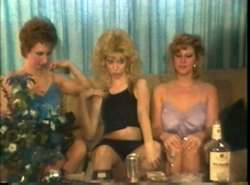 and the effects never come close to believable (which might be intentional). Still, there's a strange nostalgic kick if you're a seasoned horror fan who came of age in the '80s; the do-it-yourself oomph makes for compellingly cracked viewing if you're in the right frame of mind and willing to overlook tons of tracking problems, inpenetrable lighting and lots of ketchup doused on unsuspecting actors. The director, Gary P. Cohen, contributes commentary tracks and an interview discussing the making of his, er, franchise, though he's not as energetic or charismatic as McBride.

Last up is the only shot-on-film entry from the Retro 80s Horror Collection, Ghoul School, and not surprisingly it's the closest thing to a "real" movie out of the bunch. Another gory high school zombie film, this one depicts the mayhem that erupts when a school dance featuring the Bloodsucking Ghouls happens to coincide with the arrival of two robbers looking for a stash of money 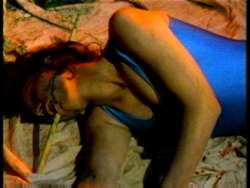 hidden by the school janitor. Soon the crooks accidentally unleash some toxic gas on the entire school and, faster than you can say Linnea Quigley, the students are being turned into blue-skinned fiends out for blood. Can two geeky horror fans save the day? How many zombies in swimsuits can fill up a screen? And why are Joe Franklin and future Howard Stern regular Jackie Martling hanging around for comic relief?

Exactly what you would expect, Ghoul School feels for all the world like a Troma film, from the rib-nudging jokes to the arch, unconvincing flesheating effects. The "postmodern" horror fan twist makes this yet another forerunner to the Scream era, which might make it one for the history books along with the likes of There's Nothing Out There, and the copious bloodshed at least earns this one a respectable rating on the gore charts. The film's fans (whomever they may be) should be happy with the presentation, which looks fine and comes packed with a ludicrous barrage of extras including three(!) commentary tracks: one with director 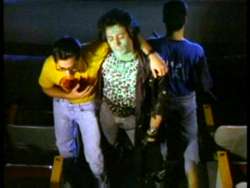 O'Rawe, one with cinematographer Michael Raso, and one with associate producer John Paul Fedele and Raso again. If there's anything you wanted to know about this film, it's most certainly included here; good luck spending an entire day with these! An earlier promotional short version of the film is also included (similar to the pitch versions of Lady in White and Street Trash), with a Raso/Fedele commentary to boot, and it actually benefits from the swifter pacing and more compact presentation. Also included is a making-of featurette with all the commentary participants as well as the FX artists and several actors. You also get a peek at the new photo shoot for the cover, as well as an alternate earlier credit sequence, four very entertaining short films from the same participants (including outtakes from one of the best, "Halloween Tale"), and trailers featuring the usual suspects.