Despite what you might expect from the title (and the cover art showing a bug crawling from a woman's mouth), this atmospheric and effective sci-fi "homegrown" character study doesn't involve freakish roaches taking over the world. Reportedly shot for two thousand dollars on digital video, 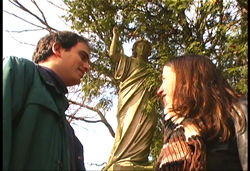 this visually astounding feature produces some wonderfully rich and creative visuals without the benefit of a big budget. Don't expect your typical DIY DVD-fest; Coyula's film - the first in a planned trilogy - is definitely way above the norm.

Set in a futuristic New York beseiged by acid rain, DNA experimentation and strange insects crowding the sewers, the dreamlike story follows the romantic misadventures of bartender Adam Zarrasky (Plotch), who's smitten with a gaunt, dark-haired girl (Rubel) he spies on the subway, though she leaves behind only a steaming tooth(!) as a souvenir. The mystery lady, Lily, continues to drift in and out of his life, as a potential roommate and a romantic almost-conquest in a graveyard. Then he runs into her again... at his mother's house, where Lily turns out to be his long-lost sister, who's been suffering from amnesia after recovering from a coma in France. However, neither sibling seems too anxious to cut down on the foreplay, leading to typically destructive results. 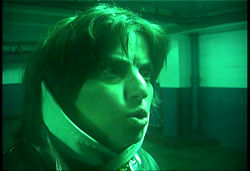 Avoiding the modern tendency to pass off a tiresome action formula as sci-fi, Red Cockroaches belongs far more firmly in the company of austere, cerebral, and visually adventurous "art house" offerings like 2046, Code 46, and The Girl from Monday. However, Cuban-born director Miguel Coyula utilizes a far more meager budget than his counterparts and still manages to evoke a convincing portrait of a familiar but vaguely futuristic environment in which vivid splashes of color complement the dreary everyday lives of the protagonists. Far from your typical model-wannabe leads, the actors instead look modestly attractive to downright homely, adding a more realistic and somber tone to the already perverse storyline. (You'll never look at a bottle of 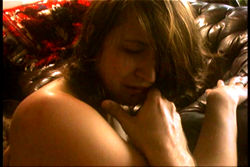 ketchup the same way again, either.)

The main feature is presented on Heretic's DVD in a vivid full frame transfer; quality is quite nice throughout with the surprising flourishes of primary colors rendered quite nicely. Augmenting the main feature is a commentary with Coyula, Plotch, and co-star Jeff Pucillo, complete with numerous stories about resourceful shooting methods, friction between the performers, and tricks to generate atmosphere within the confines of found locations. The director returns for a video "making of," shown entirely in split screen for some reason, in which he comments on the film while various outtakes and other visual emphera pop around in segmented video screens. Also included is his earlier short film, "Valvula de luz (Light Wave)," a mostly nonsensical but visually interested combination of camcorder and digital footage coupled with an array of editing and video trickery. Finally you get a funny reel of outtakes (with some hilarious blurred-out nudity at the end), a batch of nicely shot but disposable deleted scenes, a director bio, storyboards, and the excellent original trailer.