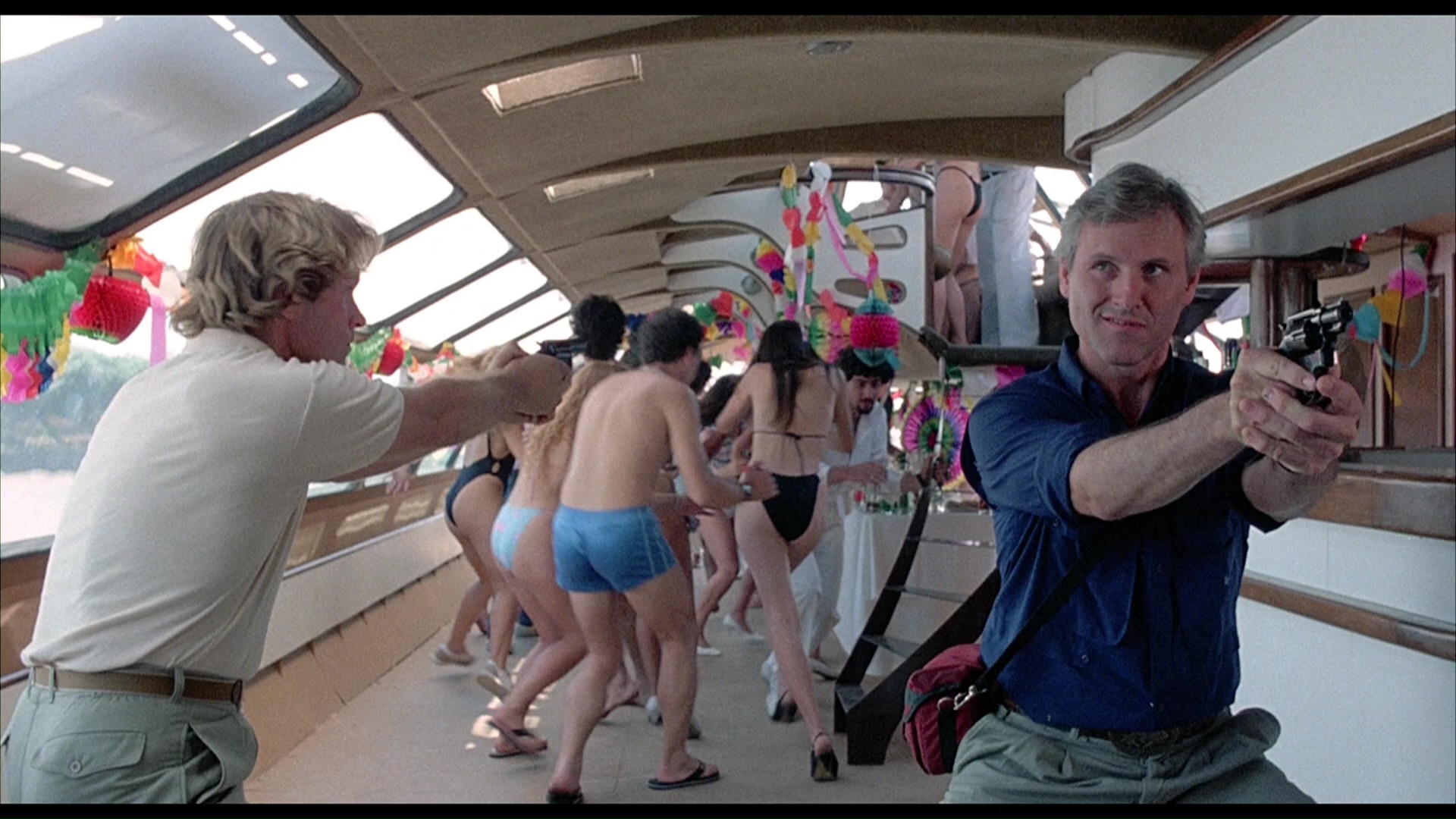 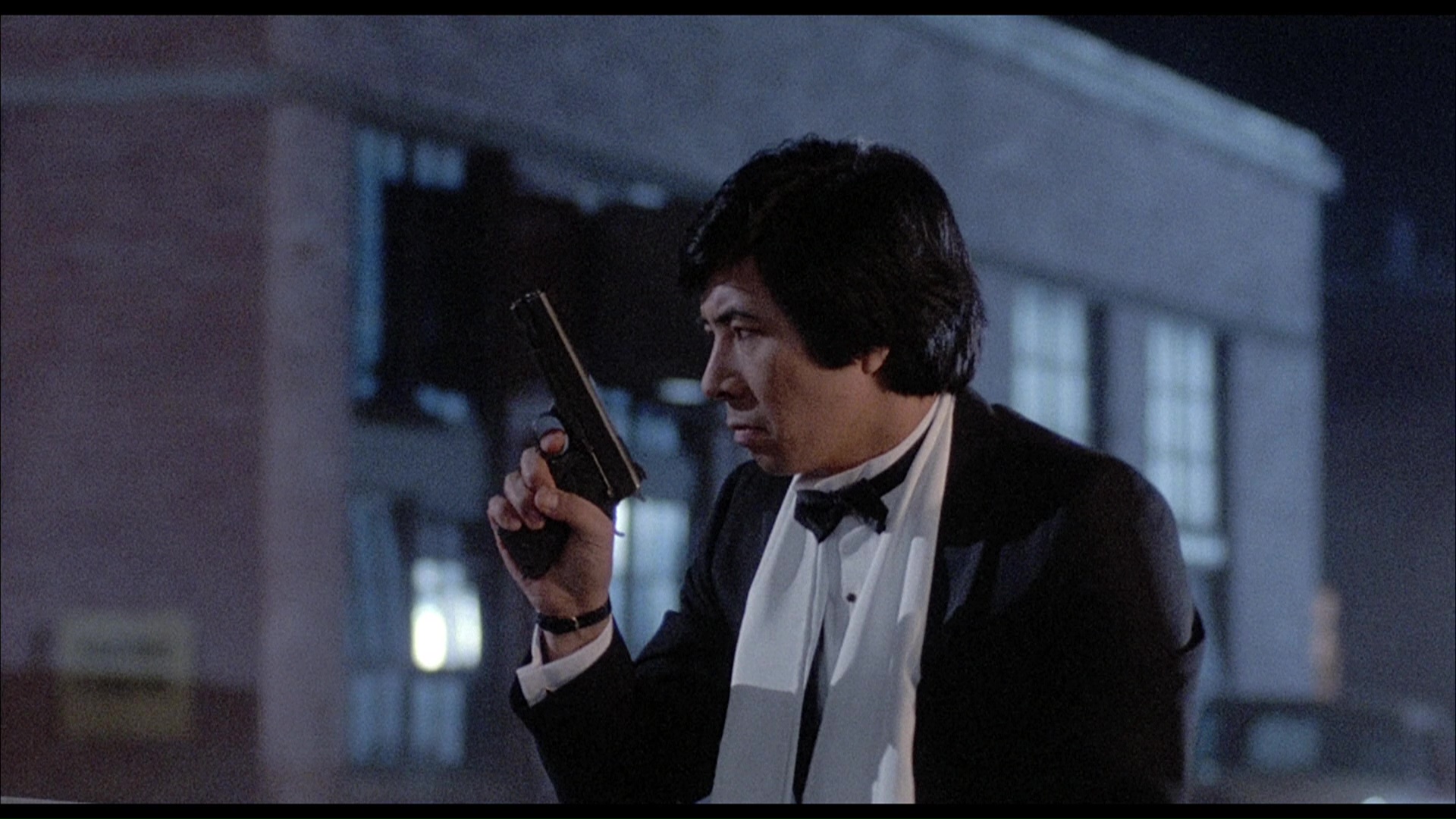 Following his beloved trilogy of ninja epics for Cannon Films, action star Shô Kosugi began wandering through other indies finding new ways to bring his enthusiastic martial arts skills to audiences. Perhaps the oddest and best remembered of his non-Cannon output is the pair of films he made for Trans World Entertainment with director and former AIP regular Gordon Hessler, Pray for Death and its substantially less bloodthirsty follow up, Rage of Honor. The latter manages to free Kosugi from his ninja role entirely in an attempt to appeal to a broader audience with a plot and action scenes more akin to a globe-trotting James Bond film, though you still get plenty of shiny, sharp objects hurled into an army of bad guys.

Working for the "U.S. Drug Investigation Bureau," agent Shiro Tanaka (Kosugi) has gone undercover to bust one of the biggest drug smugglers, Havlock (Van Bergen), presumably given his name by screenwriters with a For Your Eyes Only fixation. During a lull one evening Shiro goes off to romance his blonde girlfriend, Jennifer (Evans), while his partner, Ray (Wiley), goes after Havlock's heroin stash on a boat only to end up getting captured, smacked around, and killed. 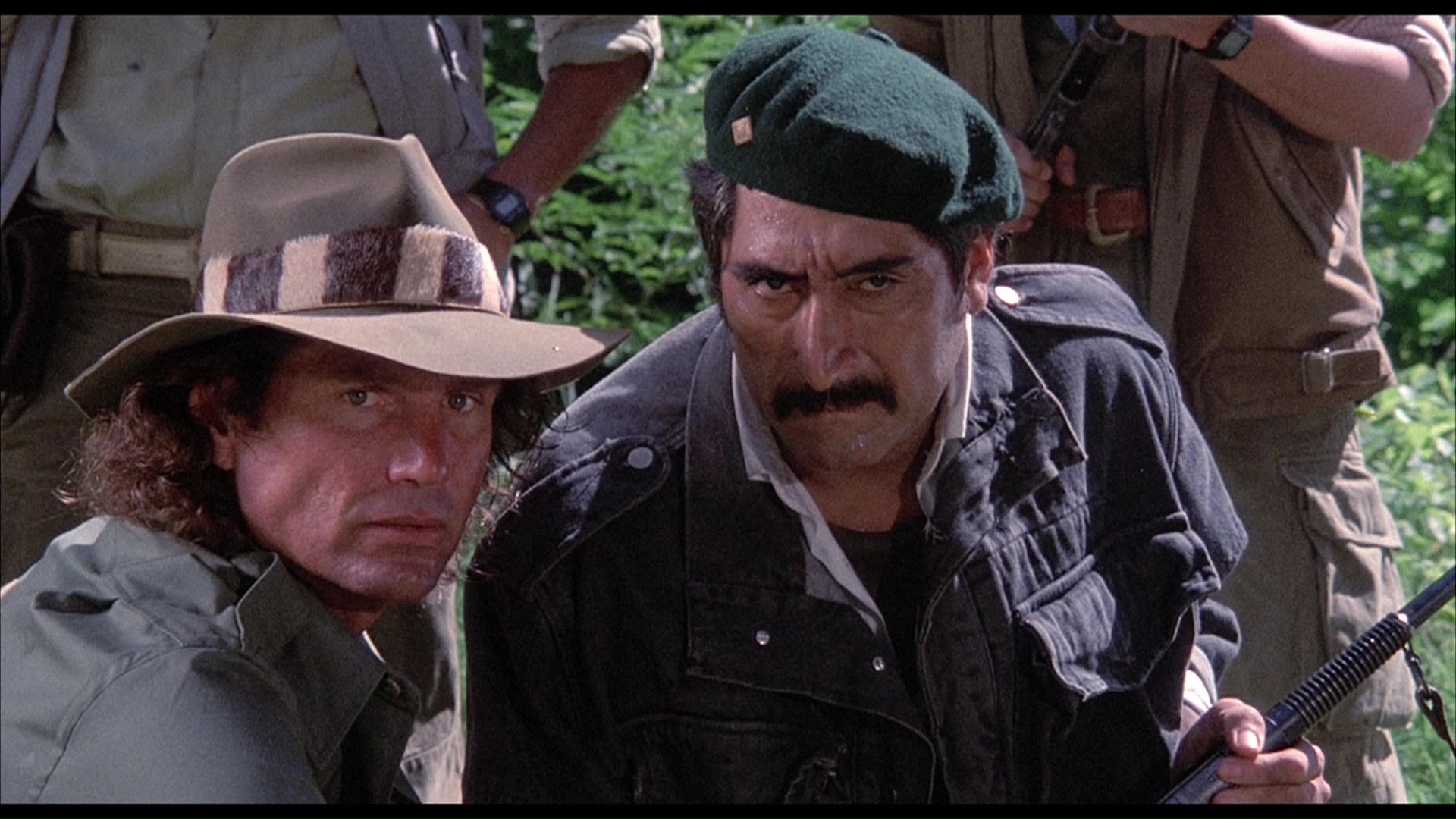 Frustrated with the agency's lack of initiative, Shiro decides to go rogue and unleashes a tidal wave of martial arts confrontations involving seemingly every building and vehicle in South America. 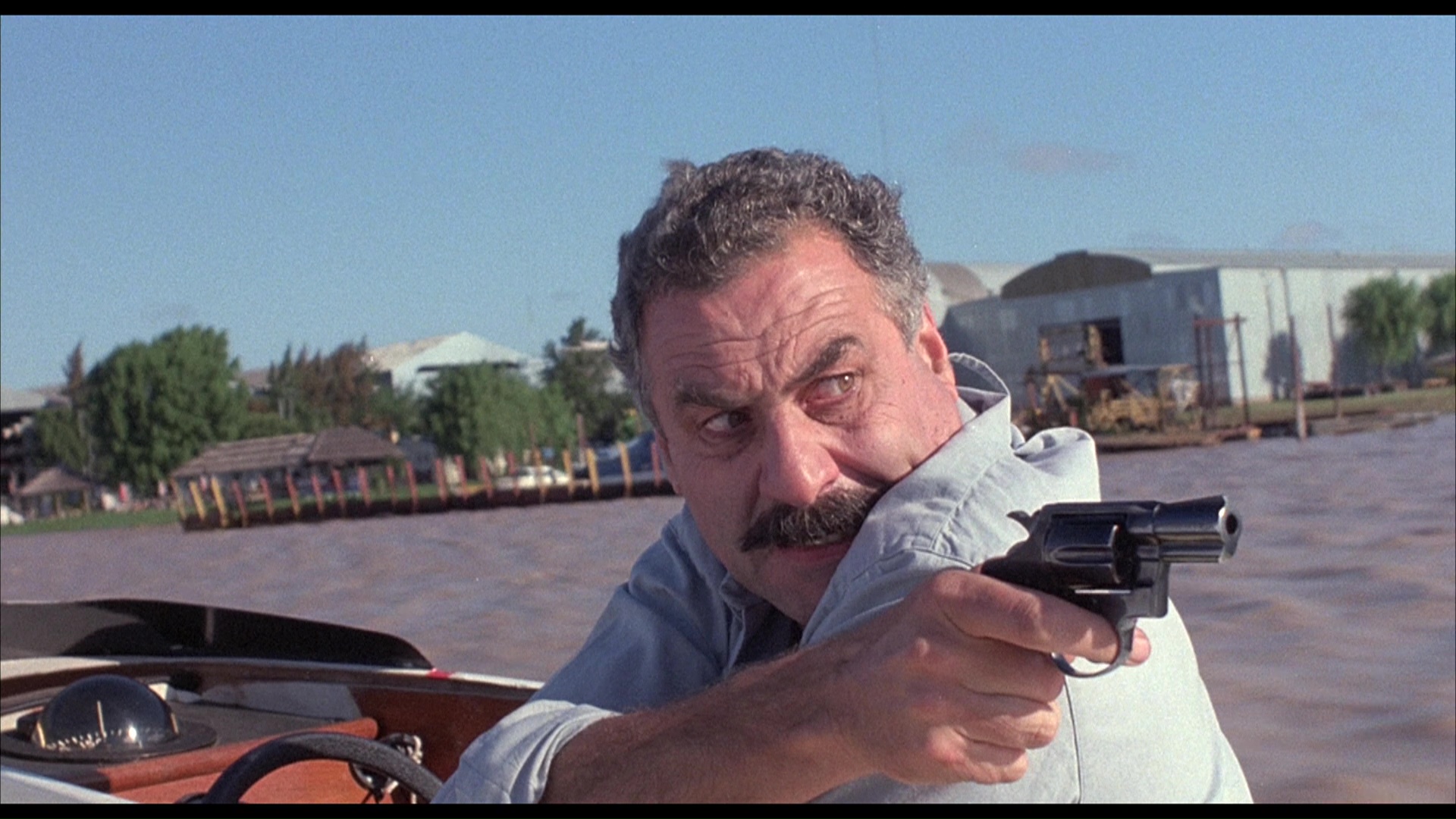 Presumably due to the trimming forced on Pray for Death to avoid an X rating, this film drops the blood quotient down considerably but still manages to show plenty of villains getting punctured, blown up, or shot. Kosugi's a blast to watch as always (and as usual has virtually no chemistry with his leading lady), while the novelty of seeing him toting around a gun and sporting evening wear gives the film a different feel than its predecessors. On top of that you get a gloriously goofy soundtrack complete with a score by none other than giallo and action film specialist Stelvio Cipriani and a gloriously overwrought (uncredited) theme song that deserves a fan following all on its own.

As with its predecessor, this film has had a very weird history on home video since its original VHS release. Apart from the usual UK ban on throwing stars and so on it hasn't had any censorship troubles, but the aspect ratio has been utterly confusing. The first standalone DVD from MGM in 2006 was full frame and very obviously cropped on the sides, with opening titles 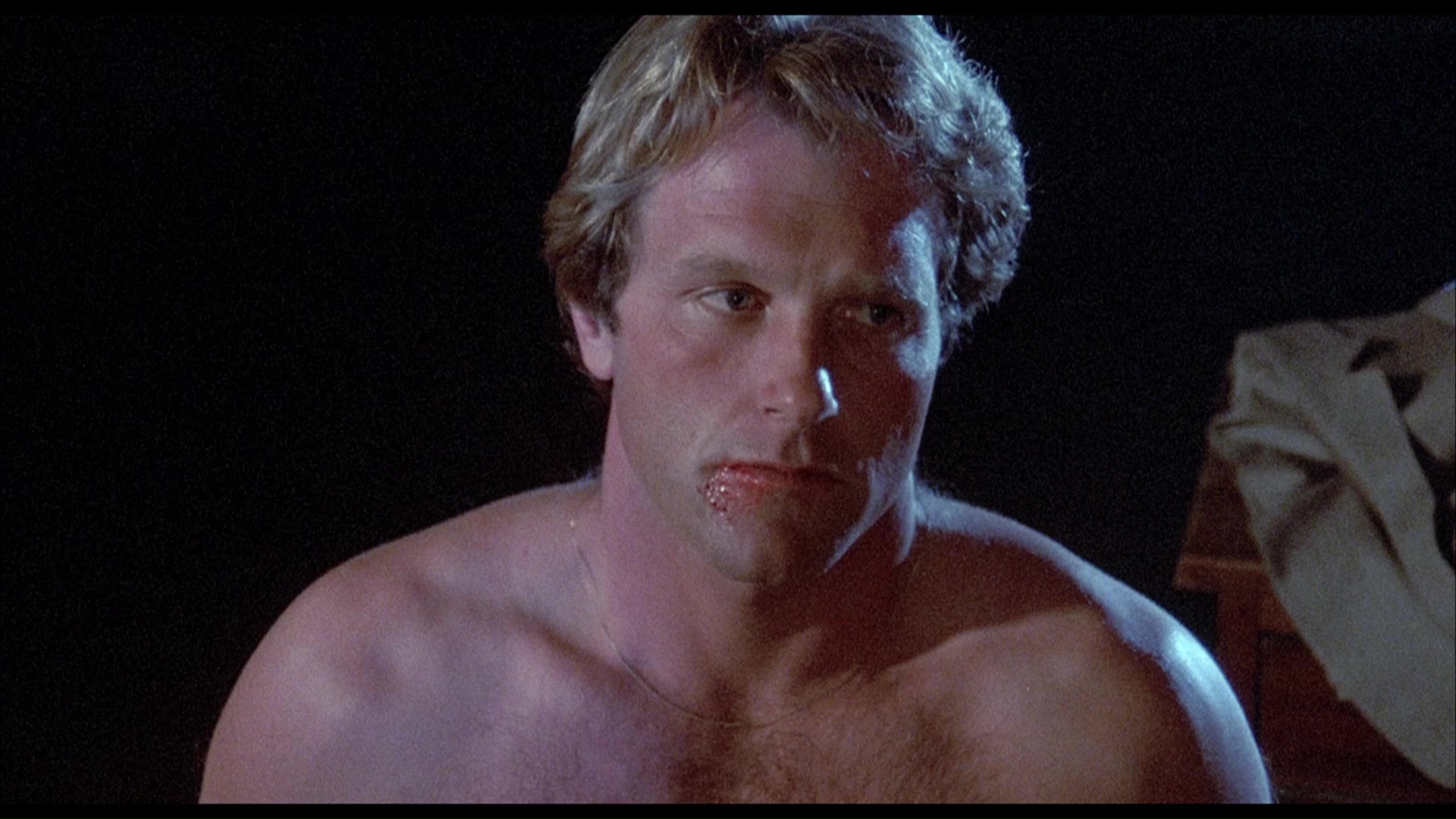 flat letterboxed at 1.85:1. In 2013 the first widescreen edition ever debut from MGM as part of a "3 Pack Action" release along with American Ninja and Revenge of the Ninja, framed at 1.85:1 but with the 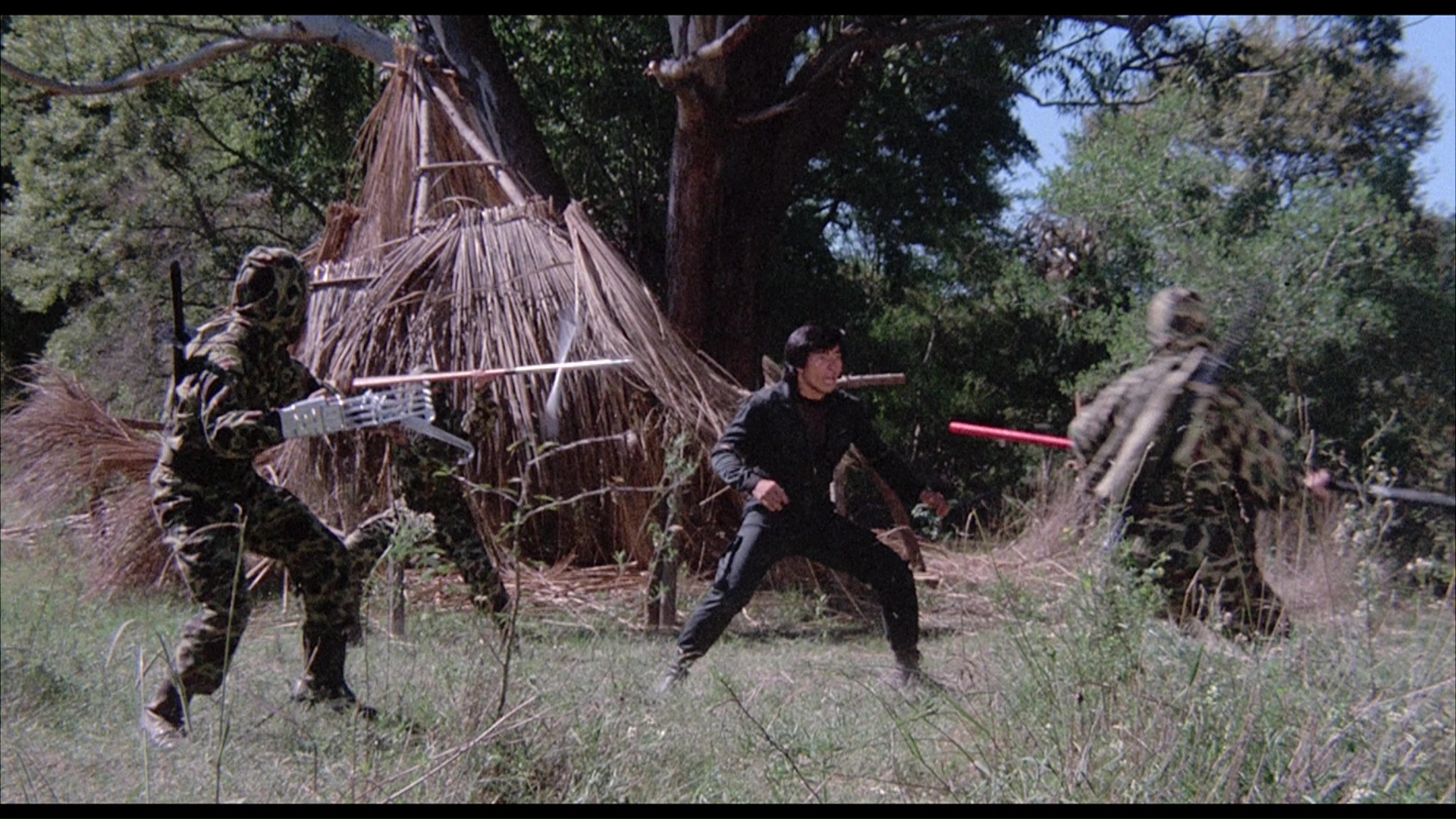 opening titles now at 2.0:1. The most obvious explanation would be that this film was shot in Super 35 with some leeway granted for how widely (or how high) the film could be framed, since none of the compositions appear to be compromised on the sides. That situation continues with the Arrow US-only dual format release, culled from MGM's HD source material with the body of the film at 1.85:1 and the wider framing present for the opening titles. It's a weird state of affairs (though better than the cropped UK Blu-ray) but presumably this is a legitimate presentation unless some evidence turns up suggesting otherwise. Image quality is as good as Pray, without any crazy noise reduction or color tampering to hinder that unique '80s film stock look. The LPCM stereo audio sounds solid enough (this isn't the most demanding sound mix), and optional English subtitles are included.

The main extra here is the 17-minute second part of "Sho and Tell," entitled "The Domination," picks up the career-spanning interview with Kosugi begun on Arrow's Pray for Death release, with the star talking about shooting this in Phoenix, Arizona and South America, getting to wear a tuxedo, 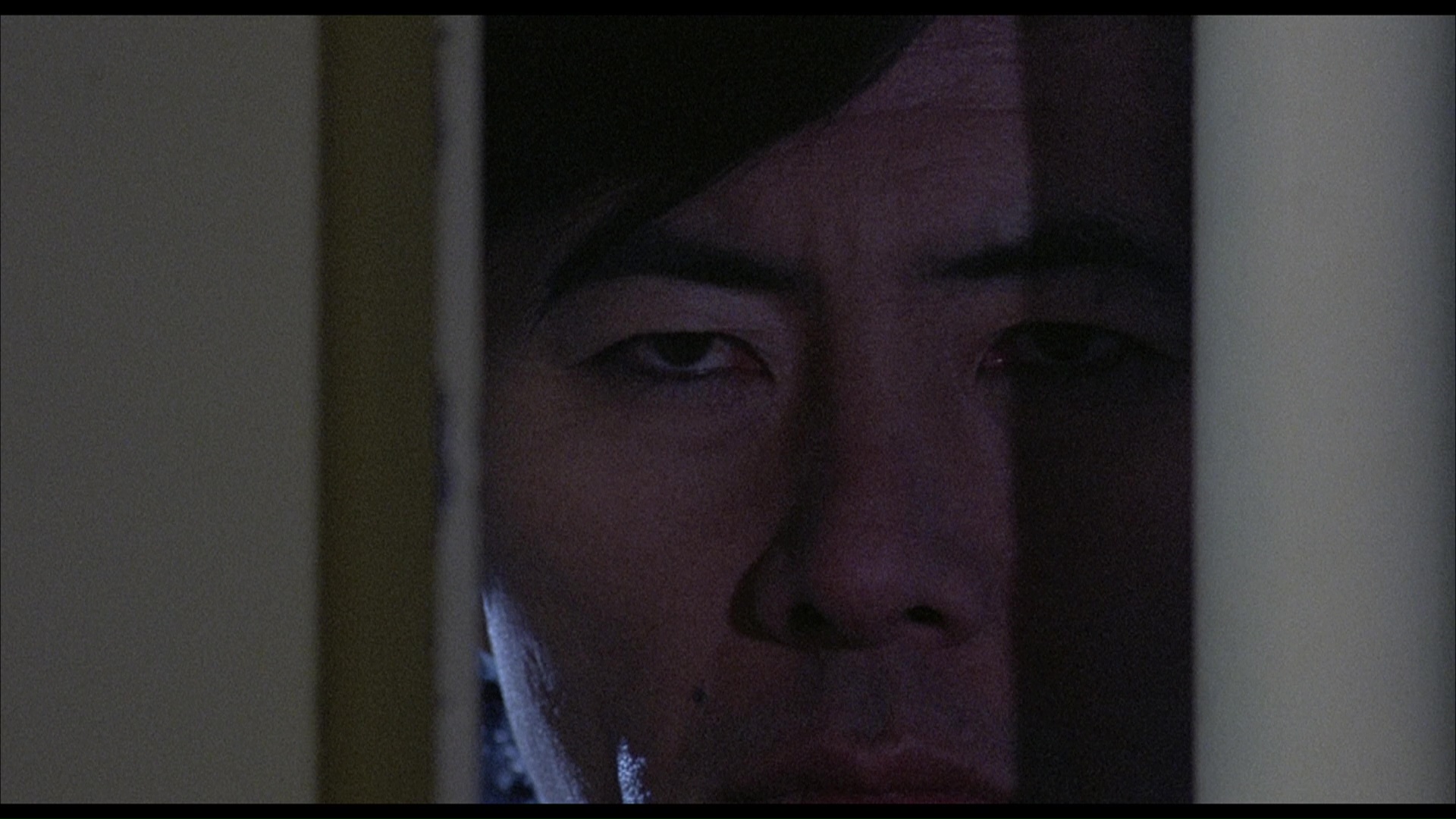 working with buddy Hessler on three films, getting hurt thanks to Jean-Claude Van Damme's faulty vision, the worthlessness of CGI in martial arts, and keeping up a healthy regimen at his current age thanks to chicken and seafood. Kosugi fans should definitely eat this up. A 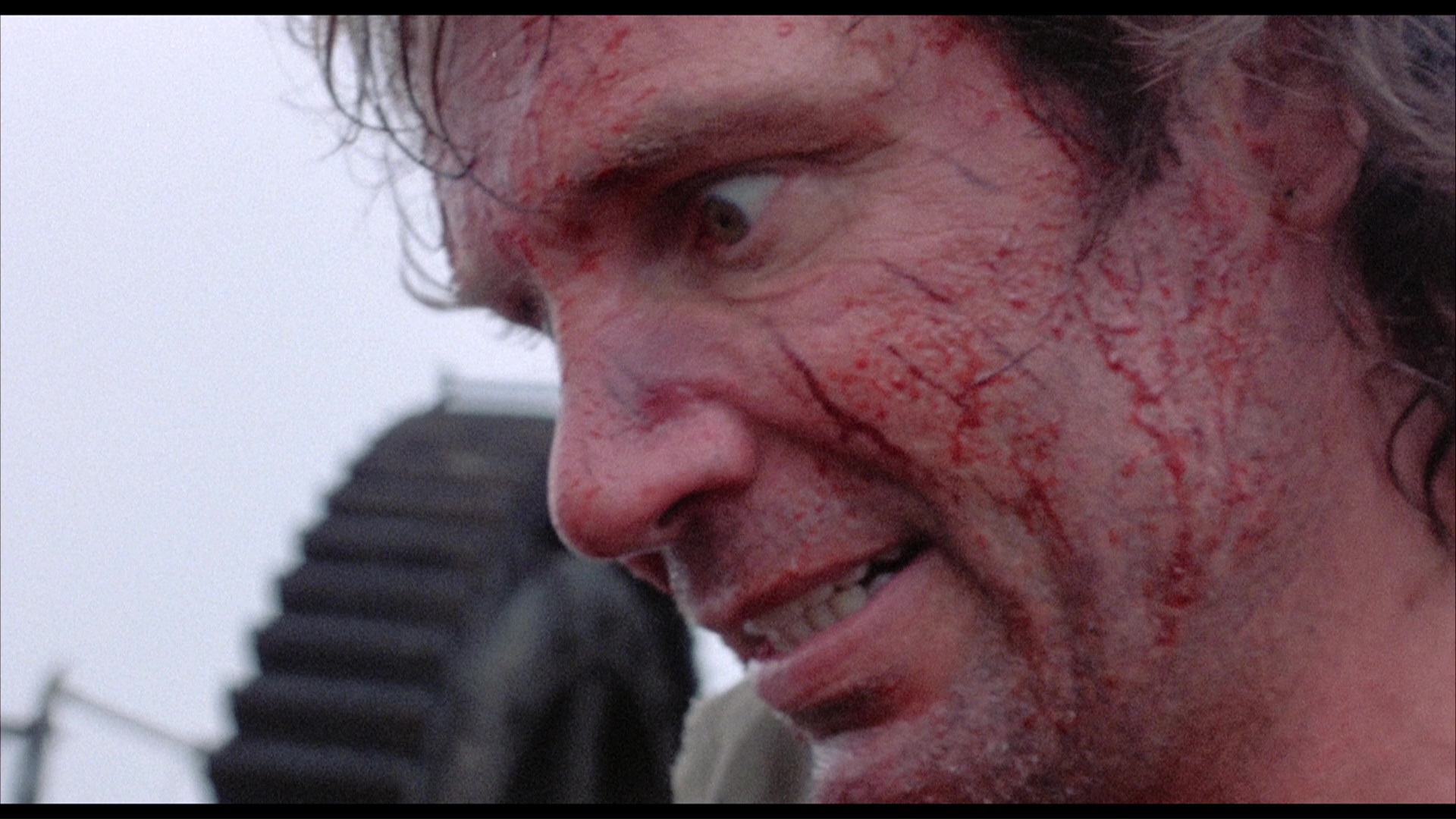 quick 3-minute interview with Cipriani, "Honorable Mentions," features the great composer explaining how he ended up doing this film thanks to his "tetralogy" of '70s crime films that impressed Hessler. In the 7-minute "American Ninjas," Temple of Schlock's Chris Poggiali presents a useful thumbnail guide to the history of ninja popularity on Western shores in the wake of You Only Live Twice with a fever pitch reached in the '80s with titles like The Octagon and the Kosugi and Michael Dudikoff cycles. Finally you get a batch of Kosugi trailers for Enter the Ninja, Revenge of the Ninja, Pray for Death, and Rage of Honor.
Reversible sleeve featuring original and newly commissioned artwork by Matthew Griffin The first pressing includes a collector s booklet featuring new writing on the film and an extract from Kosugi s upcoming book