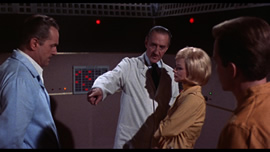 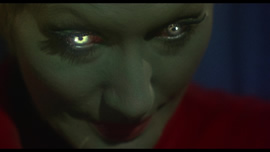 One of the more amusing practices conducted by Roger Corman and some of his pals at AIP was the recycling of footage between various productions, which reached its zenith of creativity with the purchase of a batch of ambitious, visually striking Eastern European sci-fi films in the 1960s including some classics from the USSR and Czechoslovakia. The actual plots of those films were tossed out, leaving lots of pretty, colorful footage of spaceships and planets to be strip mined for stock footage in a string of drive-in films. The best and certainly weirdest of this AIP batch is Queen of Blood, which pulls some truly surreal, beautiful imagery from the Soviet film A Dream Come True (Mechte Navstrechu) to tell a completely different story incorporating elements of previous sci-fi staples like Planet of the Vampires and It! The Terror from Beyond Space.

In the far-off year of 1990, an ambassador alien ship crashes on Mars after sending signals to Earth. A salvage team is sent to investigate by space control head Dr. Farrady (Rathbone) consisting of astronauts Laura (Meredith) and Paul (Hopper), among others, aboard their ship, the Oceano. The discovery of a single dead alien spurs a new plan to launch a satellite to track down a possible rescue ship, with Laura's beau, Allan (Saxon), manning the mission. Soon they bring aboard a most unusual discovery: a silent, green-skinned female alien who refuses to eat food but exerts a hypnotic pull over the human men. Before long, they also realize she also harbors an insatiable thirst for blood...

The story itself may 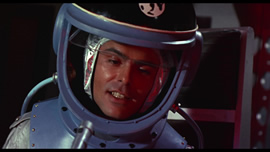 not seem like much, but this film is a visually extravagant, pulpy delight courtesy of director Curtis Harrington, whose avant garde background had served him well on his previous film, the eerie Night Tide (starring Hopper). Running a tight 78 minutes, the film plays like a colorful comic book with a string of uncanny images concentrated heavily in its second half, especially once the alien comes aboard (played by uncredited Czech actress Florence Marley). Classic monster buffs should also keep an eye out for Forry 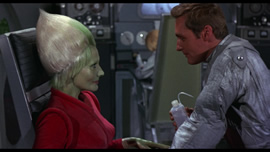 Ackerman in a cameo as Rathbone's sidekick, and the threadbare budget actually isn't much of a liability here as the painted backdrops and stylized, simple sets work oddly well with the injections of Russian stock footage (which obviously look a bit softer and a generation or two down in quality compared to the new footage). The film turned out to be a hit at drive-ins and earned Harrington a gig directing Games for Universal, after which he returned to AIP for What's the Matter with Helen? and Whoever Slew Auntie Roo?

Despite its pedigree, this film has a very weird home video history with a presumed stint in the public domain resulting in some truly awful, scratchy prints turning up from a handful of gray market companies. However, the AIP copyright still stands, and it received its first official release on laserdisc from Image Entertainment paired up with Planet of the Vampires (appropriately enough) since both were owned on home video by HBO at the time. After that it vanished for many years apart from regular airings on Showtime of all places, eventually turning well into the 2000s on MGM HD in a gorgeous, colorful transfer later dumped out unceremoniously on MOD DVD from MGM in 2011.

However, the best option by a long shot is the 2015 Blu-ray edition from Kino Lorber, which features a crisper, even more impressive rendition of that HD source that's guaranteed to light up your screen with a hellish array of reds and oranges. It really looks great, and even the murkier Russian footage looks better here. In addition to a dupey-looking theatrical trailer, you also get two fine new extras: a 21-minute video interview about the film's Russian connections and the involvement of Roger and Gene Corman with film historian Robert Stotak, and a 6-minute chat with Roger Corman himself about the new vampiric story concocted around the footage they'd acquired.