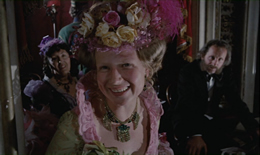 Released almost exactly one year after their ex 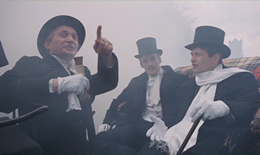 cellent Polish Cinema Classics set, this second installment from UK label Second Run jumps ahead from those late '50s/early '60s offerings into the color era, this time with two films from the '70s and one from 1990. Don't let the simple, unassuming graphic design on the cover fool you; these are wildly inventive, visually startling, and often outright surreal films with a number of gasp-inducing visual surprises.

First up is the most widely seen of the set, The Promised Land (Ziemia obiecana), a lavish 1974 epic from Andrzej Wajda. This was actually issued on American DVD back in 2003 from Vanguard in an absolutely wretched transfer. The new HD presentation here does wonders for the story of three friends of different ethnic backgrounds scheming their way through the industrial revolution in Poland, trying at first to find their fortunes at any cost. The story is adapted from an 1867 novel by Wladyslaw Reymont, depicting the harsh rise of factory culture as experienced by vivacious factory executive Karol (Olbrychski), Jewish accountant Moryc (Danton's Pszoniak), and flailing and comparatively naive business owner Max (Seweryn), who decide to band together to start a textile business and wipe out their competitors. The orgiastic lifestyle that ensues has major repercussions on their lives and those around them, including employees ground up in the process. 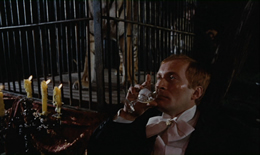 Despite garnering an Oscar nomination and a solid base of critical support, The Promised Land wasn't granted a theatrical release in most English-speaking territories and only had significant circulation around the turn of the millennium when Wajda mounted a reissued version recut and toned down to muffle both its potent sexual content and some scenes that had been (weirdly) interpreted at the time as possibly anti-Semitic while also adding some softer, slower material compiled for an extended TV broadcast. The Second Run DVD marks the restoration of the original, full-strength theatrical cut, and it's a doozy; the film is often feverish in its stylish intensity and baroque visuals, with wild clashes of vivid colors, flames, and flesh making this one of Wajda's most outrageous, startling films. It's definitely a long way from the comparatively restrained territory of his more famous films like Ashes and Diamonds, to put it mildly, and the three voracious performances at its center are still marvels to behold.

Easily on par with its previous releases, Second Run's release looks spectacular with a pristine, exceptionally rich 1.66:1 anamorphic transfer that blows away prior versions by a wide margin. There's a lush quality to the film that accentuates the indulgence and rot at the heart of the story, and in a weird way, this would actually make a good double feature with another "excessive" political and economical Europ 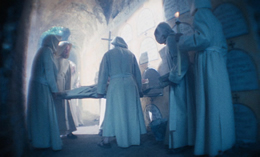 ean epic made two years later, Bernardo Bertolucci's 1900. The optional English subtitles are excellent as well, while the mono audio sounds crisp and does justice to the effective score by Wojciech Kilar (who went to work on Roman Polanski films). The sole video extra is a 24-minute video interview with Wajda, who covers the "realist" nature of the source novel and the stagnation that befell the real location of Lodz, and fascinating liner notes by film critic David Thompson, who explains the differences between the two versions and notes some fascinating connections to fellow Polish directors Andrzej Zulawski and Walerian Borowczyk. 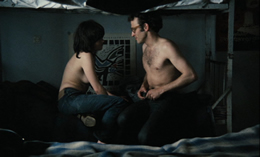 Considerably less linear is the second disc in the set, 1972's Illumination (Illuminacja), a swirling look at the nature of existence as seen through the eyes of Franciszek (Latallo), who attempts to parse out the universe first through physics and then biology but finds their laws impacting on his life in unexpected ways -- with friends succumbing to the pitfalls of gravity and human physiology dictating his path in life through both sex and childbirth. Along the way the film itself comments lecture-style on the events of the story, with the ultimate pursuit of "illumination" itself turning out to be a pursuit very much open to personal interpretation and perhaps never really attainable. Along the way the film features free associative visual flourishes involving snow, birds, brain surgery, monks, and artwork, often bordering on the avant garde. 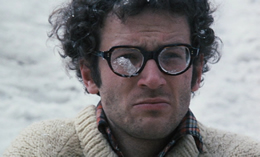 This was the fourth film by Krzystztof Zanussi, another Polish filmmaker whose rejection of the Communist dogma ruling film production at the time caused him to couch his arguments in films dealing with issues outside of overt propaganda. Here his hero isn't searching for financial or political happiness but a higher state of general being, with enough hallucinatory visuals and edgy content to earmark it as a work of the early '70s. It's also extremely beautiful at times, with the partially unscripted production allowing for some startling editing techniques not unlike Nicolas Roeg (including one bit that actually anticipates Bad Timing). Latallo anchors the film well with a largely introspective performance; a filmmaker himself, he died three years after this film's release under circumstances oddly similar to one in this story. The relationship between the actor and director is actually a significant part of "A Trace" ("Slad"), a 1996 short documentary (26 minutes) about Latallo made by his son, Marcin, in 1996, painting a portrait of a potentially major Polish talent portrayed through interviews with his family and colleagues as well as letters written to his son.

Both that and the main feature will be new for many English speakers as Illumination doesn't appear to have had a subtitled release on home video before. Thankfully that's been rectified with this release, which also looks fantastic with a new HD

-sourced restored transfer. There's really nothing to complain about here at all; the crisp, clean visuals look great, and the mono audio is also impressive with another diverse score by Kilar. Also included is a new interview with Zanussi, clocking in at 19 minutes (and in English, with a really elegant accent), in which he covers his entry into philosophy, the inspiration for the film's monastery sequence,

and his own troubles finding actors and picking some from his crew members. Michael Oleszcyk also provides some very useful liner notes charting the film's origins and its unusual production, including trivia about the director and star.

Finally the third and most recent film, Escape from 'Liberty' Cinema (Ucievzka z kina "Wolnosc'), which was released shortly after the collapse of the Communist government in Poland and offers an audacious commentary on the country's status through the lens of filmic fantasy. Here the concept is an open twist on Woody Allen's The Purple Rose of Cairo (which is excerpted here with Allen's permission) as a state censor (Gajos), long past his own creative days, is confronted with a unique problem. The characters in a popular romantic drama called Daybreak showing in a local theater have decided to stop performing their usual roles, tossing off the shackles of the hackneyed script and inspiring each other to become real individuals. The rupture causes ripples in the censor's own life and the increasingly rebellious audiences who turn up to find out what will happen next.

A very clever absurdist comedy that can be enjoyed either with or without its sharp social and political commentary, this was a rare theatrical effort for director Wojciech Marczewski, who was poised at the time to become one of the great new Polish filmmakers alongside his other post-Communist peers. The film was shot in Lodz (just like The Promised Land) and takes a very different look at the area, where the government-imposed pap foisted on the moviegoing public is amusingly transformed into a vehicle for awakening among the people. (The irony, of course, is that exhibited films since then in both Poland and in mass culture have actually become more conformist over time, which will no doubt inspire another cinematic dissection at some point.)

Aesthetically speaking this one isn't quite as ambitious as the other two films; it has that kind of dark, grungy look common to late '80s film stock, but within its limitations, the DVD looks very good (and is the only one shot at 1.85:1 instead of 1.66:1). It's a loss for film fans (but presumably a major gain for film students) that Marczewski switched to cinema teaching after this; it would be terrific if Second Run could release some of his other titles as well since he only seems to average a film or two per decade at best. He seems very intelligent and articulate as well in the DVD interview featurette, which covers his boyhood at the height of the Cold War, his views on state-imposed censorship, and the circumstances under which he integrated and got permission to include Allen's film within his in such a highly unusual manner. The liner notes by Michael Brooke are worthwhile as well, sketching out more of the director's background and explaining the real-life circumstances of Polish censorship that serves as a backdrop to the whimsical (but sometimes biting) premise here. A solid job all around and a fitting cap to a set of films well worth discovering.