There isn't much that hasn't already been said about grandstanding French director Leos Carax, whose work remains largely unknown in the U.S. 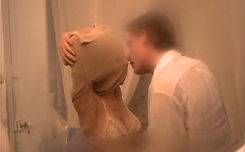 apart from the lackluster released given by Miramax to his stylistically dazzlling but dramatically shaky Lovers on the Bridge (Les Amants du Pont-Neuf). Dropping many of the blatant visual fireworks which became his trademark, Carax turned his attention to the obscure, often censored Herman Melville novel from 1852, Pierre, ou les Ambiguites. An acronym from the book's title plus the Roman numeral "X" (for the tenth draft of the film's script) form the unusual monniker for this bizarre sojourn into passion, insanity, incest, and violence, which could easily strike a viewer as unbearably pretentious or deeply profound, depending upon one's mood. 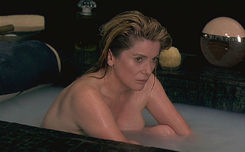 Pierre (Guillaume Depardieu, son of Gerard), a pampered aristocratic brat, lives in the country with his mother, Marie (Catherine Deneuve), with whom he shares an obviously unnatural physical relationship. The two refer to each other as brother and sister, and she doesn't seem to mind a bit that Pierre's engaged to his sweet blonde cousin, Lucie (Delphine Chuillot). Another cousin, Thibault (Laurent Lucas), arrives to shake things up a bit and may have a bit of interest in Lucie himself, but that's nothing compared to the dark woman who haunts Pierre's dreams and seems to be lurking always just out of the edge of his vision. One night on his motorcycle Pierre startles the feral woman, who turns out to be his secret half sister, Isabelle (Yekaterina Golubyova). After she explains her plight, the two run off together, sending Marie spiralling into despair. Pierre and Isabelle shack up in a warehouse doubling as a terrorist base and, their genetic connection aside, become lovers. An aspiring novelist with one anonymous bestseller to his credit, Pierre returns to the typewriter but finds his creativity stifled 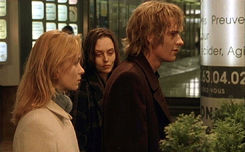 by his surroundings. Things get even worse when Lucie comes to stay with the unhealthy pair, and destructive emotions begin to surface.

Apart from the jarring opening credits, Pola X feels far more sedate than Carax's other films, at least for the first half hour or so. Gradually he introduces different film stocks (including some bizarre day for night exposures), eccentric surround sound effects in which simple background sounds come to dominate the soundtrack, and hallucinatory fantasies including one brief but unforgettable moment which finds an embracing Pierre and Isabelle floating down and being consumed by an outdoor river of blood. Most jarring is the inclusion of a very heated, hardcore sex scene halfway into the film, performed by Depardieu himself along with a female contortionist body double (and, according to the commentary track, aided by Depardieu's girlfriend). Naturally it's mostly intended for shock value, but it still works and packs more of a punch than the similar explicit imagery in another recent French film, Romance. 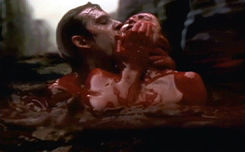 On the surface, Winstar's DVD of Pola X seems like one of their best efforts thanks to such snazzy whistles and bells as a 16x9 transfer and a 5.1 remix. However, there are a few flaws worth noting. While the image quality is crisp and quite impressive, it was obviously derived from a PAL source and betrays some streaking and overlapping frames during a few bits of fast onscreen motion. The running time also wound up compressed in the process from 134 minutes to 127. The 5.1 mix is also misleading, as it simply channels the 2.0 mix into a 5.1 matrix and leaves out the center channel, so the dialogue instead comes from the front speakers. The alternate 2.0 surround mix is less powerful but far more accurate, while the dialogue remains firmly front and center. The optional white English subtitles are well written and always easy to read, while the surround activity is usually strong and nicely separated. Extras on the disc include two "outtakes," which actually consist of a montage from the film's scoring session (and the lyrical music is indeed impressive) along with a brief collection of behind the scenes shots from Deneuve's motorcycle scene. Other extras include the U.S. theatrical trailer and a commentary track from Depardieu, whose comments are sparse and rather shyly delivered at first but become more insightful and endearing as the film progresses. In a strange juxtaposition which could only have come from a European actor, he blushes at his brief nude scene early in the film but seems rather nonchalant about his graphic copulation later on. Well, c'est la vie.