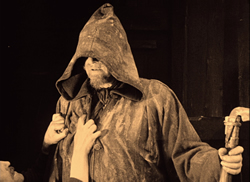 A Dickensian fantasy with horror overtones, The Phantom Carriage is Sweden's most significant entry in the canon of silent fantastic cinema which flourished around the globe in the 1920s. Composed of a compelling supernatural story, a moral message that would be revisited several more times in Hollywood films, and striking visual effects unlike anything else from the era, it's a still-striking masterpiece from director/actor Victor Sjöström, one of the major early figures in Swedish cinema (and future star of Ingmar Bergman's Wild Strawberries). 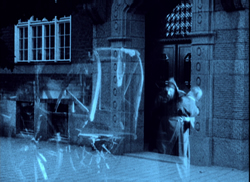 An ailing samaritan nurse (Holm) on her sickbed calls out for a man named David Holm, which happens to be the name of a drunken lout (Sjöström) carousing with two friends at a tavern for New Year's Eve. David refuses to come and recounts the legend that the last sinner to die before the new year will be forced to drive death's carriage and round up souls for the following 365 days. Sure enough, David is killed in a bar fight and is visited by the coachman of the afterlife, his late friend George (Svennberg), who is prepared to turn over the reins after demonstrating to David how a lifetime of drunkenness, abuse, and otherwise inconsiderate behavior led him to his current fate.

A poetic and constantly creative film, this expressive rumination on man's responsibility to the world and his fellow human beings is still startling today for the audacious nature of its visuals, including a barrage of superimpositions that almost turn it into an avant garde film at several moments. The religious overtones are of course present, including some symbolic grace notes all the way down to brief gestures and poses by the actors; nothing is naturalistic here, as the mood of the story and the eerie presence of the ghosts and the carriage sweep the viewer through a time-jumping narrative of lost chances and possible salvation. 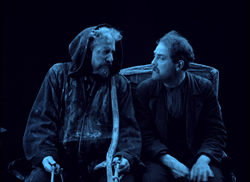 Originally restored by the Swedish Film Institute in 1975 using two surviving film elements, this film survives today in rather good condition considering its early vintage and rocky distribution history. Criterion's Blu-Ray edition (also available on DVD, though the opportunity to experience any silent film in HD shouldn't be passed up) is taken from this same element transferred in Stockholm (in 1080i for some reason, perhaps due to the nature of the original preserved materials). It's actually quite impressive for the most part, perhaps a notch below the absolute pinnacle of hi-def silent presentations (see City Girl or The General for the best examples to date) due to the amount of damage that still exists and the inherent softness caused by so many double exposures. Detail is excellent throughout during the normal scenes, however, and the atmospheric tinting works beautifully here. Intertitles remain in Swedish with optional English subtitles.

Two music accompaniments are included, a traditional chamber performance by Swedish composer Matti Bye (probably the one most viewers will opt for first, in DTS-HD) and a much more experimental and bizarre score by KTL (in 2.0 PCM), including some repetitive and unnerving percussion that pushes this film much closer to full-on horror than one might anticipate. Casper Tybjerg, a Swedish film historian and critic, contributes a dense and scholarly audio commentary that's packed with references to the literary and cultural references to the film as well as its wealth of visual symbolism, though his dry classroom-style delivery may not fare well with viewers who are feeling the least bit sleepy. Also included is a 1981 video interview with Ingmar Bergman (from Victor Sjöström: A Portrait) about working with the director and his influence on the country's cinema, an illustrated step-through essay by regular Criterion Ingmar Bergman commentary Peter Cowie about the legendary filmmaker's inspirations from this film, footage of the Rasunda studio where the film was the first production to be shot on its grounds, and a booklet featuring a lengthy essay by Paul Mayersberg with an interesting emphasis on the director's relationship with the author of the source novel.