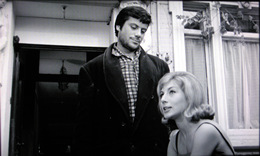 The history of 1960s British filmmaking is littered with countless films wounded by the industry's strict censorship system at the time, but none are stranger than the case of The Party's Over, a still-shocking social drama held up for two years over intense content issues. Even its director, Guy Hamilton (who helmed Goldfinger the same year!), had his name taken off the film after major chunks of significant footage hit the cutting room floor, and when it finally unspooled on a handful of screens in 1965 in butchered form even with an "X" certificate, it was quickly withdrawn again over public concerns and completely buried. From a historical standpoint this is obviously a significant film due to the fact that it's one of the earliest starring roles for Oliver Reed (shortly after Curse of the Werewolf) and features a rarely-heard score by the great John Barry, including a great theme song, "Time Waits for No Man," crooned by Annie Ross (who went to acting immortality decades later in Short Cuts, Superman III, and the two Basket Case sequels). Amusingly the song also quotes quite liberally from the James Bond theme, a nod to the most controversial moment of Barry's career. Also, the unusually literate script was written by Marc Behm, most famous for Help! and the novel Eye of the Beholder, which was filmed twice with wildly mixed results. (Oh, and he also wrote Hospital Massacre and The Mad Bomber.) 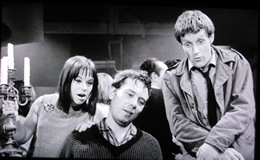 However, the real selling point for this film is the BFI's resurrection of the longer and extremely bold pre-release version which features a still-shocking plot twist that will have unsuspecting viewers spitting soda across the room. There's really no way to talk about this film without spoiling some major things, so if you're the least bit interested already, just skip ahead to the next paragraph or order the disc and watch it completely cold if possible. So... our story begins at a wild beatnik party where the attendees pass odd, random items to each other in a long opening shot that foreshadows the famous marijuana club bit in Danger: Diabolik by a few years. Eventually we wind up at a balcony where Moise (Reed) is cynically watching a young man clutching on for dear life from the railing. He eventually gives in and hauls the poor guy up at the urging of Melina (soap opera regular Sorel), a visiting American now hitting the London club scene. Morning arrives and the drained youth stumble through the Chelsea streets before winding up at their favorite watering hole, a cellar club. Turns out Melina's fiance, Carson (Exorcist III's David), is arriving soon to collect her, and she's none too thrilled at the idea. When he does finally arrive, Melina is nowhere to be found, Moise is acting more sullen than usual, and sexy blonde Nina (Woodville) is now competing for his Carson's attentions. Then Melina's industrialist dad (Eddie Albert!) shows up to help uncover the truth when one of the beatniks commits suicide, and to say the least, the whole story isn't pretty. Everyone gives their own version of the last time they saw Melina at an unusually wild party, whose full proceedings are finally shown in a truly jarring finale that was almost completely obliterated in the final release cut. Let's just say you don't usually expect onscreen necrophilia to be a major plot point in an early '60s British film, and even compared to the likes of The Horrible Dr. Hichcock, this is pretty unsettling stuff. 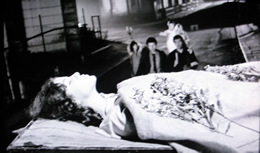 The BFI release of The Party's Over marks its first home video appearance in any format, and their dual-edition Blu-Ray and DVD disc features the most exhaustive presentation imaginable. The Blu-Ray features both the theatrical cut from the original negative (looking fantastic throughout) along with the preferable extended version, which uses the negative as the source when possible while sourcing the censored footage from the sole surviving print, which bears some obvious hairline scratches. Most of the inserts are obvious in the opening scene and the finale, though a few other quick bits pop up here and there. The element distractions are worth it, though, as this is a film experience you won't soon forget. The DVD side contains only the extended version, with the alternate replacement bits from the theatrical cut included as an extra (such as Reed's hamfisted narration added to the opening credits and a wildly revised final scene at a train station).

The video extras apart from the variant versions include two shorts: "The Party" (1962), a 16-minute short about a bunch of English art students getting together for a hip-shaking shindig, and "Emma" (1964), a 12-minute character study from this film's uncredited producer, Anthony Perry, about a girl learning the hard way about growing up in the big city. The hefty insert booklet includes a useful historical appraisal by Andrew Roberts (who hilariously reveals the censors wanted the film to end with all the beatniks getting killed by a bus), some brief notes by Hamilton about the battle over the film, an additional rundown of the censorship cuts which resulted in the mangling of 18 minutes of the film, a history of cinema beatniks by William Fowler, a Hamilton bio by Peter Hutchings, and notes on the two bonus shorts by the Vic Pratt. Even given the BFI's track record of uncovering surprising gems for their amazing Flipside series, this truly stunning release is laudable for reviving a film that's both artistically exceptional and still capable of leaving a jaded audience speechless.