Banned twice in its native 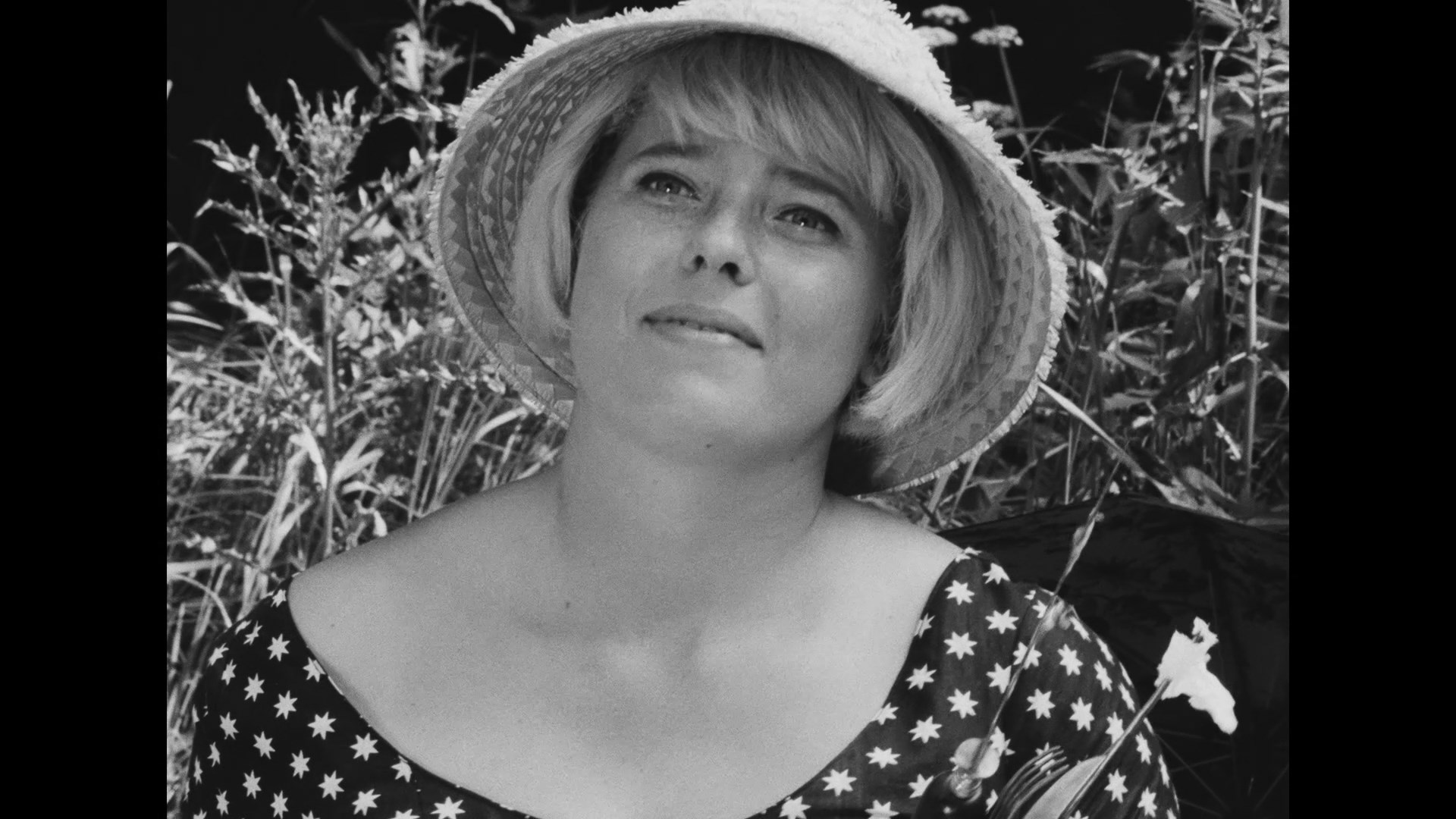 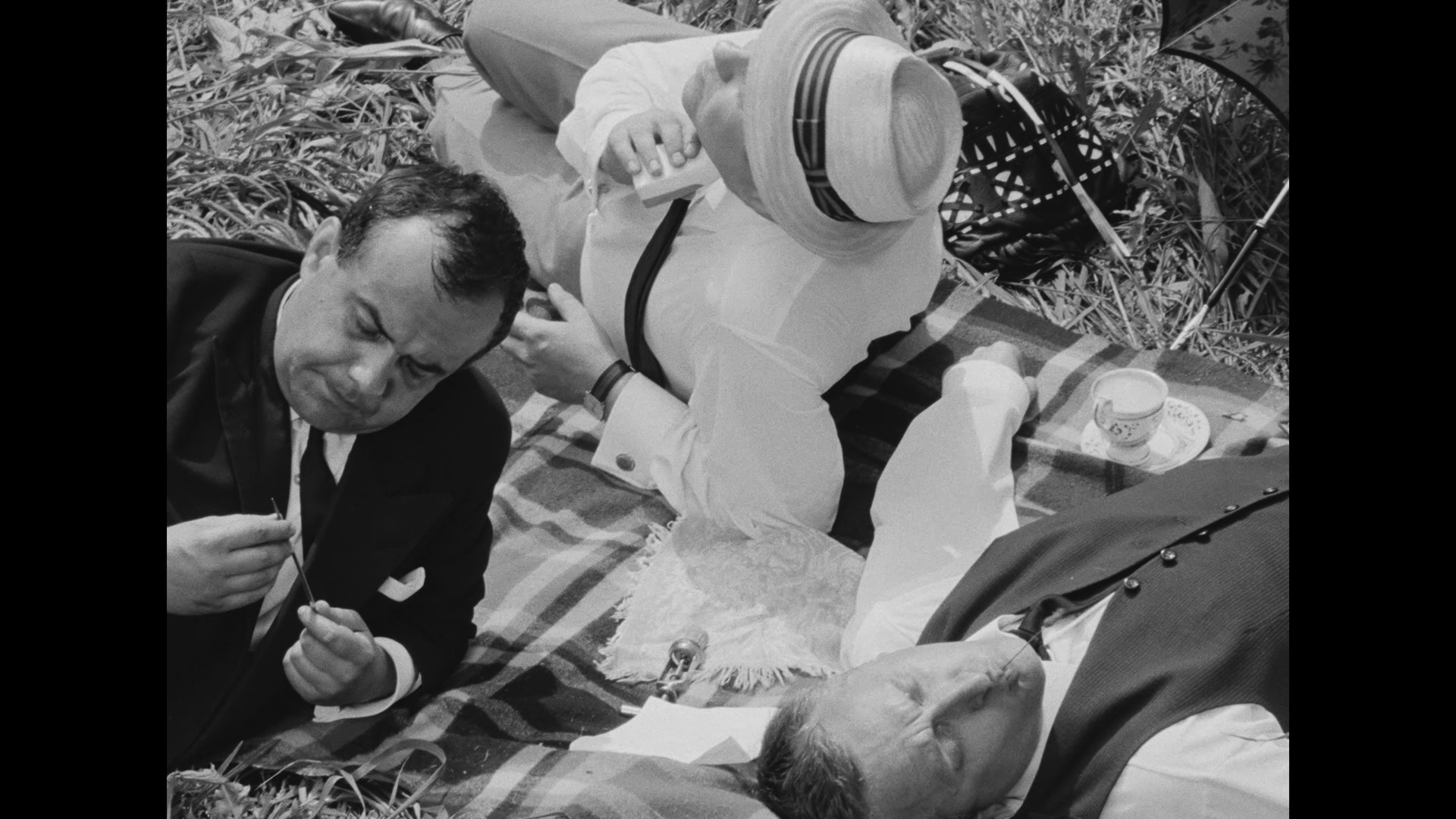 and now held in esteem as one of the most important and controversial films of the Czechoslovak New Wave movement, The Party and the Guests (also shown as A Report on the Party and the Guests) was the second feature for director Jan Němec after his auspicious debut with 1964's Diamonds of the Night. Fresh from an installment in the anthology film Pearls of the Deep, he and his wife, screenwriter and costume designer Ester Krumbachová, wrote this film together adapted from her own story, and the result starring many of their friends was far too much for the state censors to bear with its unsettling allegorical look at totalitarianism and conformity.

Sort of hovering the middle ground between Luis Buñuel's The Exterminating Angel and Pier Paolo Pasolini's Salò, this is an often wry and twisted film set in virtual real time about a group of seven friends out in the woods who set up a picnic in a clearing. At first they're delighted by their little country lunch, a bathing interlude, and a passing wedding party, but suddenly a suited interloper (Klusák) shows up and begin bossing them around, ordering increasingly irrational demands and setting up a desk while issuing passive-aggressive threats. 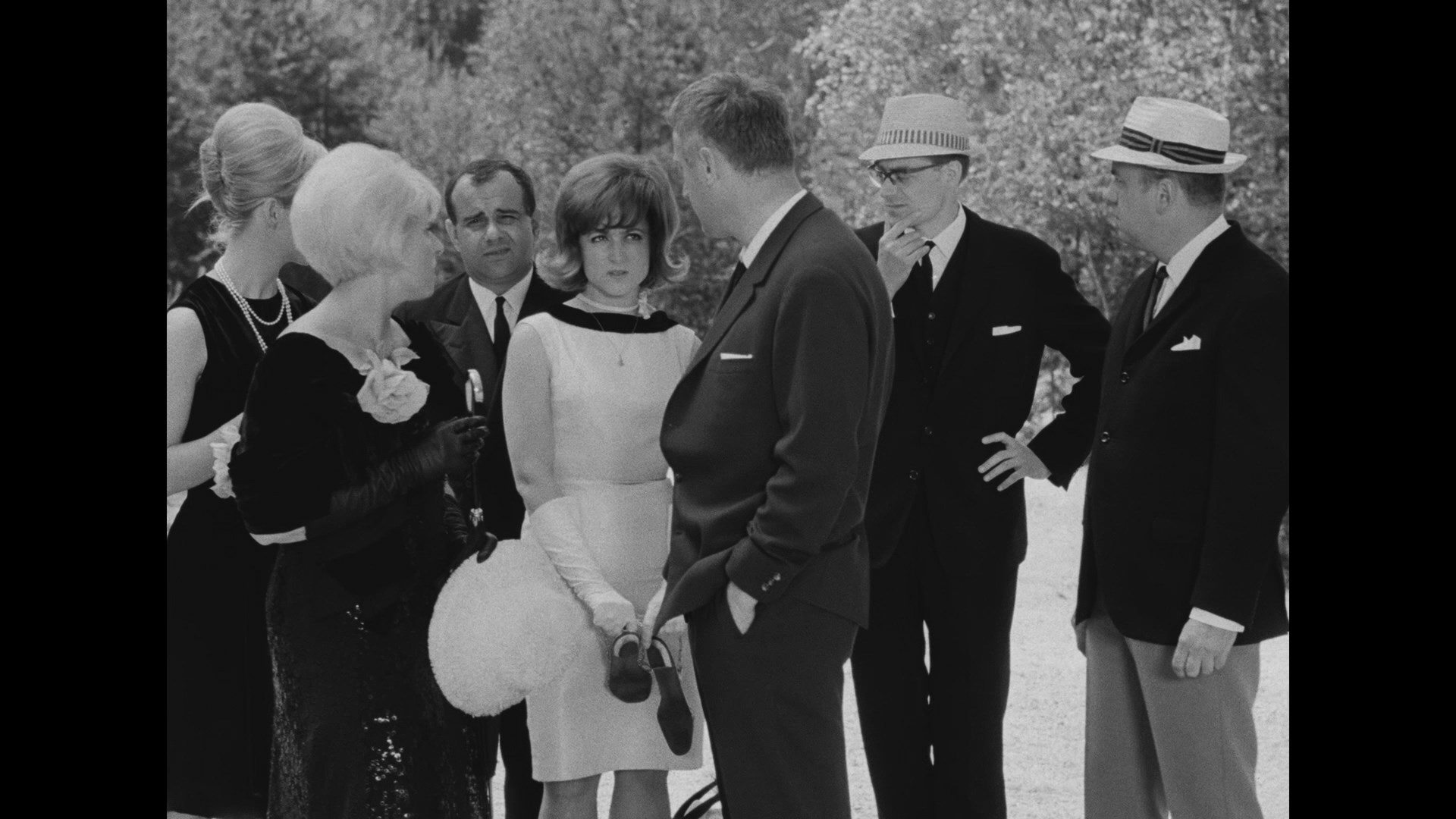 Eventually they all go over a hill where a banquet table has been set up by a mysterious host (Vyskočil), leading to a finale in which the most rebellious and silent of the persecuted (film director Schorm) decides 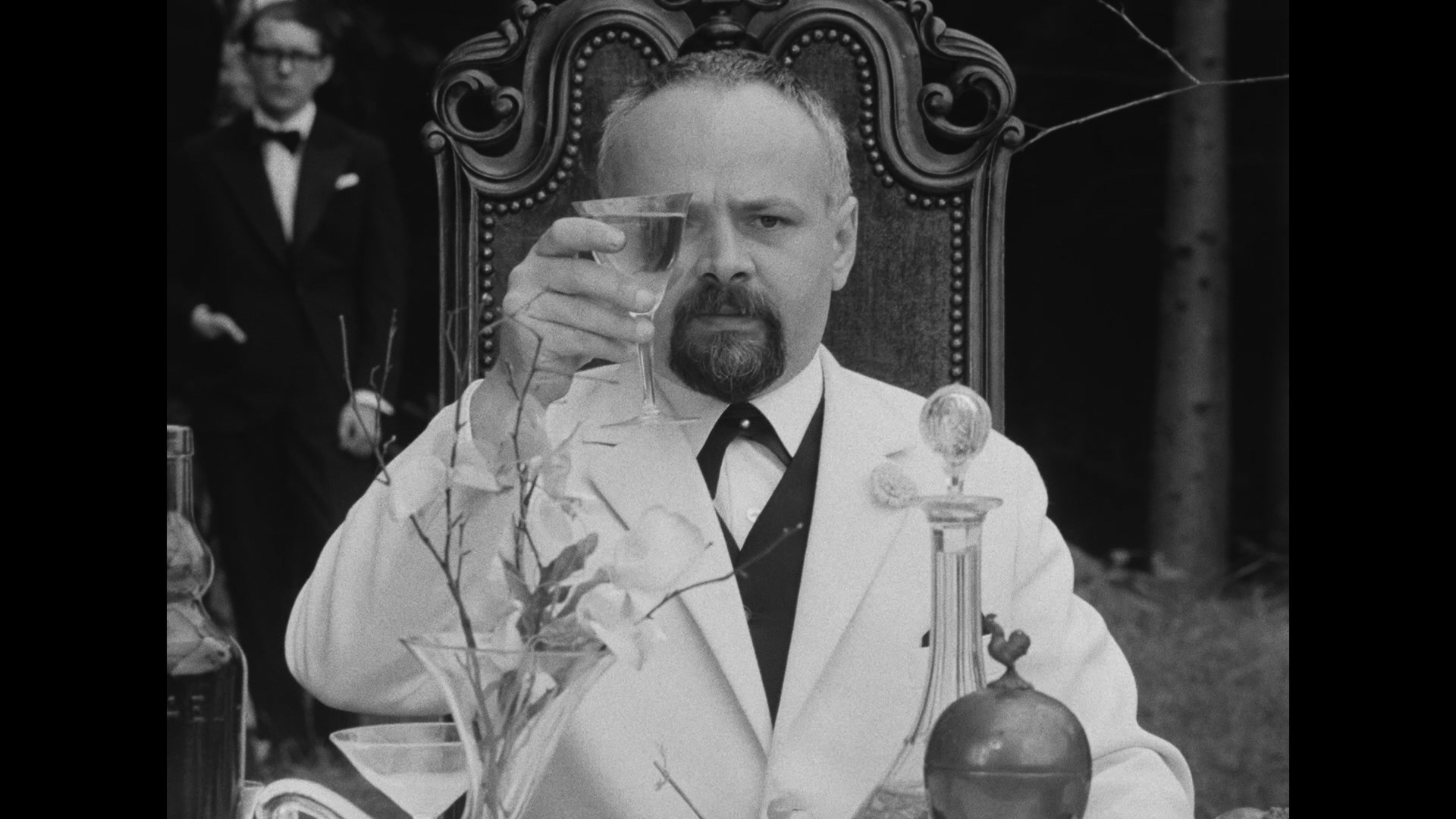 The portrayal of people here as herded sheep under a mounting string of bizarre demands is easily as relevant today, and while the film could invite any number of readings depending on the viewer's cultural background and political perspective, there's little no doubt what was really on Němec and friends' minds. The chipping away of resistance and the random reorganization of the participants is a clear jab at the fascist mindset, and the enigmatic final scene leaves a chill in the air long after it's over. The sunny, pastoral setting is a particularly ingenious decision, a perfect contrast to the strong-arm tactics on display.

The Party and the Guests first appeared on DVD in the U.K. from Second Run with a good transfer for the time and a great filmed appreciation by Peter Hames (12m41s), who does a deft job of laying out the director's career to that point, the censorship entanglements, the involvement of Krumbachová, and lots more. In 2021, Criterion brought it to DVD as part of the Pearls of the Czech New Wave set under its American title (along with Pearls of the Deep, Daisies, Return of the Prodigal Sun, Capricious Summer, and The Joke), albeit with no extras. The 2022 Blu-ray from Second Run is a major step up, sourced from an immaculate new 4K restoration from the Czech 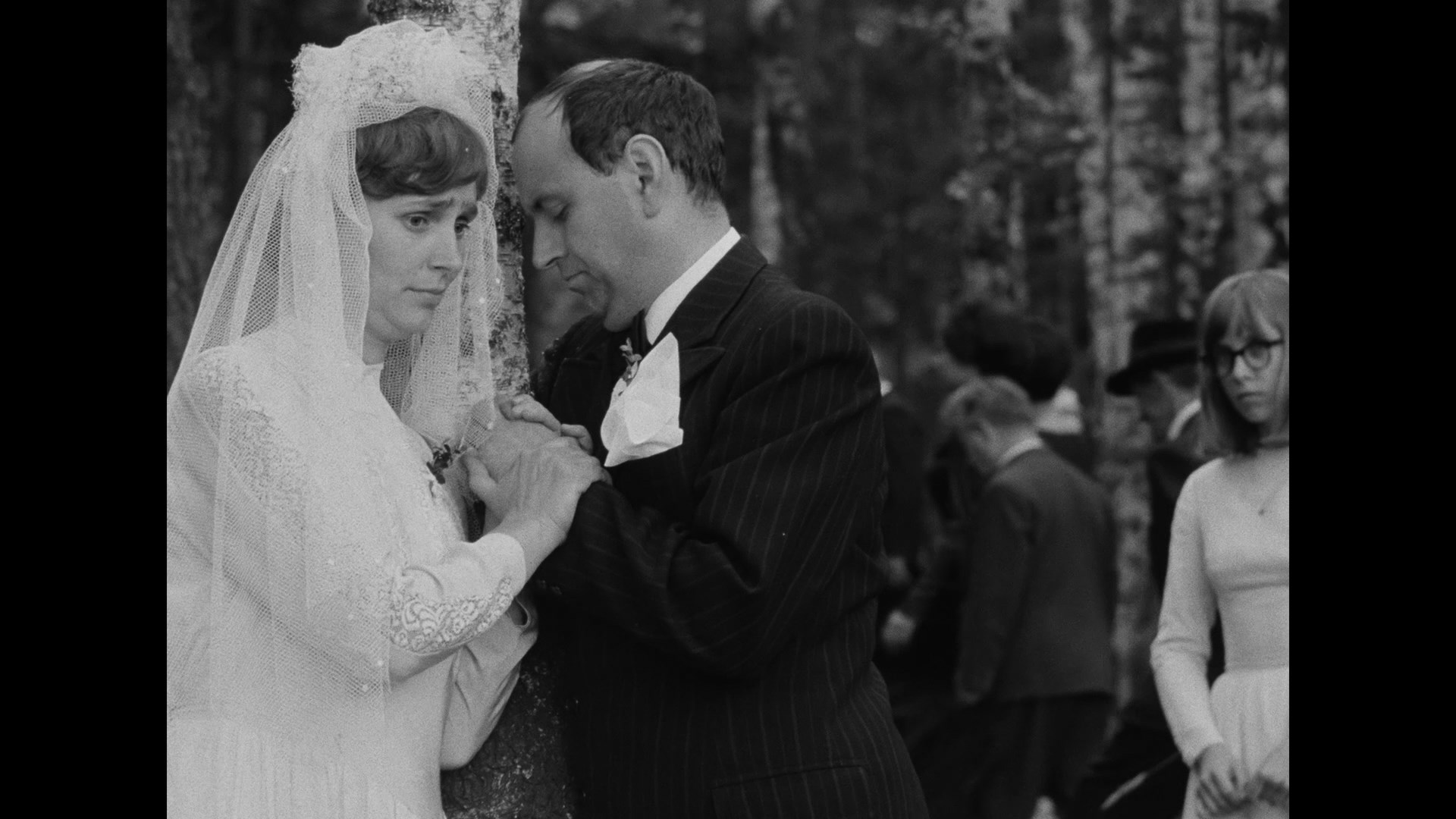 National Film Archive from the original negative materials. It looks and sounds superb, with the Czech LPCM 1.0 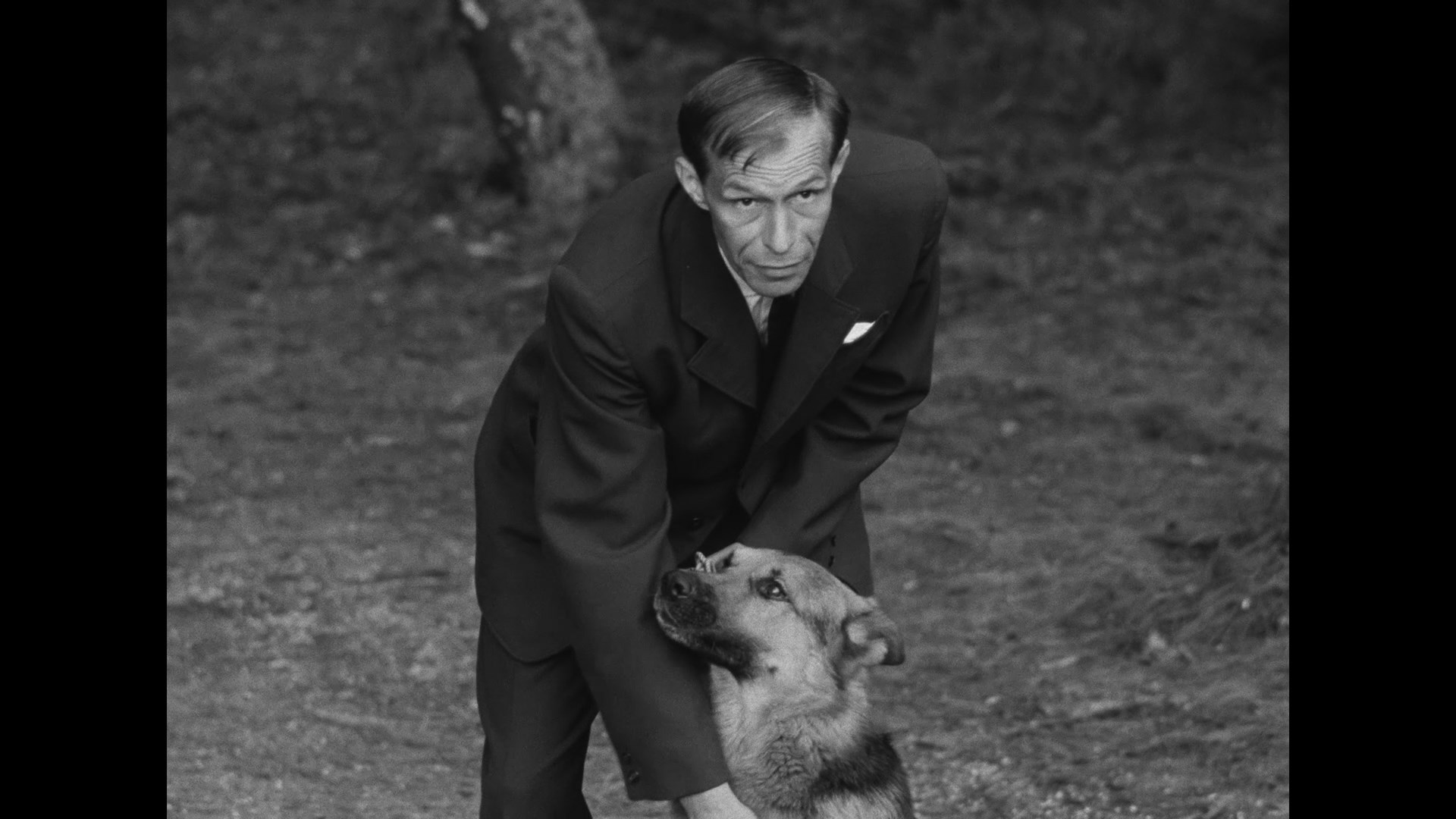 mono track also in great shape and featuring optional English subtitles. The Hames video appreciation is ported over here, but you also get two new audio commentaries, the first an academic analysis by Jonathan Owen studying the actors and their respective characters, the intentional banality of the dialogue in the opening idyllic section, the influence of Jean Renior, and the symbolic implications of the film's structure and its imagery. The second from the Projection Booth podcast gang features Mike White, Samm Deighan and Kat Ellinger is a more general overview of the film and its director, drawing parallels to other filmmakers of the era, other cinematic influences, the crafting of the actors' roles based on their personalities, and the nastier truths about human nature and power lurking within its frames. Also included here is a new HD restoration of The Hand (Ruka) (18m25s), Jirí Trnka's striking stop-motion animated short about a sculptor repeatedly pestered by a gigantic white hand that keeps invading his home studio. It's great to have here in HD (we desperately need a Trnka Blu-ray collection!) and looks wonderful as well. Carried over from the DVD is a 20-page booklet featuring a thorough and very appreciated essay by Michael Brooke laying out the film's absurdist comedy leanings, Němec's collaborators on the film, and an extensive look at the director and his work both before this film and in its aftermath.