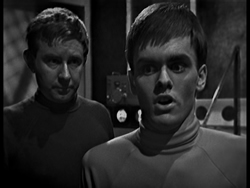 An unheralded little gem in the history of science fiction television, Out of the Unknown also serves as a particularly dramatic 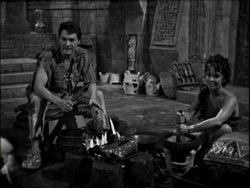 cautionary tale about the fragile state of the format’s legacy. During the infamous tape wiping sprees at the BBC, a huge chunk of this show was consigned to oblivion with 20 of its 49 episodes surviving intact. Audio recordings and fragments of several remaining ones also turned up to allow for reconstructions of the stories, and based the miraculous amount of what we have now on home video for the first time from the BFI, it’s a show worth exploring in whatever condition you may find it.

The program began in 1965 (and ran until 1971) with the airing of “No Place Like Earth,” an adaptation of a short story by John Wyndham (The Day of the Triffids) in which humanity of the future has obliterated its home planet and must navigate between the societies of Mars and Venus for a safe haven. While on Mars, Bert (Terence Morgan) gets along well enough with the locals but longs for the life of his lost home; when a chance comes to relocate to the supposedly idyllic, familiar environs of Venus, he finds a bit more than he expected. This actually the first episode filmed and ran into some opposition from those who found it a bit too introspective and slow to hook first-time viewers, but the striking production and weird background details made it intriguing enough to launch the anthology. 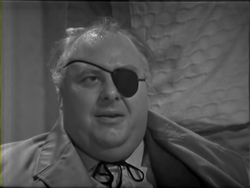 member on a flight back from Jupiter, featuring a very young David Hemmings), the weird and quite compelling oddness of “Stranger in the Family” (about a young man with subtle physical defects manipulated to become a media star but at a great price to others), “The Dead Past” (an unorthodox time travel yarn about a device offering glimpses of any time period), the Philip K. Dick-styled corporal punishment tale “Time in Advance,” 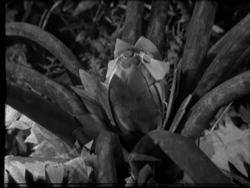 an outrageously freaky festival of man-eating plants with “Come Buttercup, Come Daisy, Come…?,” a study of an adolescent offering salvation to a crew of planet salvagers in “Sucker Bait,” a Twilight Zone-styled slice of paranoia and nightmare persecution called “Some Lapse of Time,” the space travel social drama “Thirteen to Centaurus,” and the Asimov-styled robot society sketch “The Midas Plague.”  Six of these feature audio commentaries moderated by writer and radio presence Toby Hadoke (who carries over to subsequent discs), and still galleries are included for all of them spread out across the three DVDs they occupy. The commentary guests range from Wyndham expert Dan Rebellato (who offers a positive assessment of the pilot episode’s fidelity to the source material), the BBC Radiophonic Workshop’s Brian Hodgson, director and future Hammer veteran Peter Sasdy, production assistant John Glenister, and several actors including Michael Danvers-Walker, Wendy Gifford, Philip Voss, Clive Endersby, Roger Croucher, Roger Jenkins, Jane Downs, and Delena Kidd.

The second season (and fourth disc) kicks off with an unexpected but rewarding choice: “The Machine Stops,” adapted from E.M. Forster’s dystopian novel about a humanity consigned to being kept alive and nourished underground by a machine. Thanks to the title, you can probably figure out what happens as a young man (Michael Gothard, way before The Devils and Scream and Scream Again) tries to find out what caused their closed-off existence. It’s easily one of the strongest entries in the surviving series and would actually make for a fine starting point. Unfortunately the bulk of this season is lost but you do get “Lambda 1” (a very chatty tale about people getting stuck in the earth while using a teleportation system), the far superior nuclear panic attack of “Level Seven” (with survivors holed up at a supposedly secure bunker during an atomic conflagration), and “Tunnel under the World,” another high point of the set in which a couple constantly beset by advertising and bouts of déjà vu learn more than one shocking truth about the nature of their existence. Commentaries for these episodes include writer Kenneth Cavander, director Philip Saville, script editor Michael Imison, and Level Seven novelist Mordecai Roshwald. 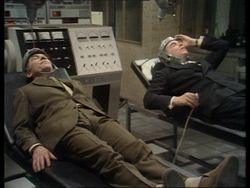 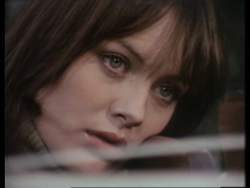 On we move to the third season, represented here with “The Last Lonely Man,” photo and audio reconstructions of “Beach Head,” “The Naked Sun,” and “The Yellow Pill,” and 31 surviving minutes of “The Little Black Bag.” The one fully extant episode is a pretty gimmicky, low-key novelty about a world where minds can be passed into other willing bodies at the moment of death, with a deal between two men taking a nasty turn. The others – involving robots, mind manipulation, and a medical bag left behind by a time traveler – seem intriguing but are tough to fully assess given the compromised nature of what remains, with tinny audio recorded from TV broadcasts offering the only simulation we have of how they originally played.

At this point the tone of the series shifts a bit as we reach 1971, with full color and a decidedly more macabre, surrealist spin given to many of the chosen stories. For example, “To Lay a Ghost” is a full-on horror tale more in keeping with Brian Clemens’ Thriller as we start off with a young woman (Lesley Anne-Down) being stalked and assaulted in the woods. Years later she moves into a house with her husband and thinks her assailant (who may not be flesh and blood) has plans for her. Sort of a precursor to The Entity but with a much sicker undertone, this is easily the most shocking episode of the bunch (more conceptually than for what it shows) and carries some pretty heavy, un-pc baggage that would never fly today. Incidentally, this was directed by Ken Hannam, who went on to helm the wildly underrated Aussie thriller Summerfield a few years later. Next comes another horror-tinged tale with 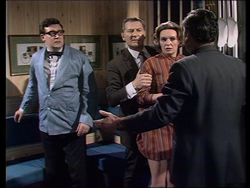 “This Body Is Mine,” a pretty obvious spin on The Mephisto Waltz as a meek scientist (Taste the Blood of Dracula’s John Carson) is goaded by his wife into testing out his brain-swapping invention on his brutish boss (New York Ripper’s Jack Hedley), with unpleasant consequences. Then we’re back in thriller territory with “Deathday,” in which a cuckolded reporter kills his wife in a rage and tries, with much difficulty, to pass it off as the work of a local serial killer. Definitely ambitious and at least partially successful is “Welcome Home,” a twist on the old “I came home and my wife and friends don’t know who I am and there’s some guy pretending to be me” game; however, this one (set in a remote country home) has an unorthodox twist in store halfway through that sets this one apart a bit from the pack, leading to a melodramatic and really downbeat confrontation at the end. The last 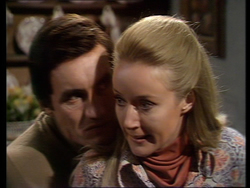 complete episode in existence is “The Man in My Head,” a visually interesting offering about some soldiers infiltrating a foreign military base with a mission they can only undertake in stages with hypnotically-controlled signals that control their memories. It’s a nifty concept that manages to carry the story along (and the hyper-crimson production design is definitely striking in a Chosen Survivors kind of way), even though the ending may not satisfy everyone. Last up is another photo and audio reconstruction of “The Uninvited,” which will definitely seem familiar to fans of Hammer House of Mystery and Suspense since it was remade as the excellent Carol Lynley episode “In Possession.” Basically it’s about a married couple about to move out of their home who are besieged over the course of an evening by spirits… or are they? This version (which features a supporting bit by Don’t Look Now’s Hilary Mason) was probably very unnerving in its original form, and what remains here is still enough to make it a strong recommendation for horror buffs. While the previous season had no commentaries, this one has a chat for “This Body Is Mine” with Carson (who remembers it well and touches on some of his other horror work, too), plus writer Moris Fahri and actor Bernard Brown for “Welcome Home” and director Peter Creegen and actor Tom Chadbon for “The Man in My Head.” 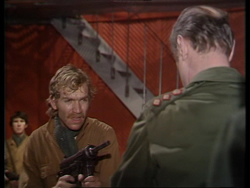 Obviously the quality of the release is dependent on the condition of the surviving material, which is quite good for the era. Obvious effort has been made to minimize the flaws in the original sources, and overall it’s a smooth, satisfying experience far better than the bootleg copies that have been floating around with timecodes for quite some time. Other extras include a 16-minute video interview with director James Cellan Jones about his tenure on the show, an odd bit of source film footage used in “Deathday,” and most substantially, “Return of the Unknown,” a new 42-minute featurette with many of the commentary participants and several others (Jeremy Davies, Christopher Barry, John Gorrie, and more) covering the bumpy history of the show and discussing many of the now-lost episodes in sometimes tantalizing detail. The hefty insert booklet contains a thorough introductory essay by Mark Ward (who effectively describes the show’s origins as the brainchild of Irene Shubik) and covers the ins and outs of adapting the work of many noted authors, whose reactions were quite positive to their respective episodes. Ward also contributes broader essays about ‘60s science fiction and Shubik’s TV legacy, and about 1970s paranoia culture and loosening moral attitudes in the horror and sci-fi genres. There’s also an episode guide with trivia about several titles, plus rundowns on the extra features and notes about the technical presentation. A must for sci-fi and horror TV fans.