The spate of psychic-oriented chillers that began in the 1970s with such films as Don't Look Now and Eyes of Laura Mars got a late, cut-rate entry in the mid-'80s thanks to director Roberta Findlay, who was dabbling with 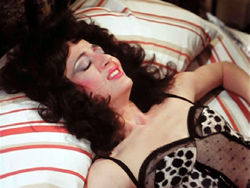 various horror and action cliches at the time. Strangely restrained for the most part, this isn't the best place to start as far as her non-adult work goes; however, fans will still find glimmers of that mad Findlay style lurking around here and there.

After moving into their new apartment, young marrieds Jennifer (Powers) and Ray (Neil) discover "The Oracle," a supernaturally endowed hand with a writing pen used by the previous tenant, an elderly fortune teller. Not being terribly bright, Jennifer decides to goof around with the device and begins receiving messages from beyond the grave courtesy of a man's ghost intent on avenging his murder. Soon with Jennifer's help, the ghost is causing all sorts of spooky mayhem 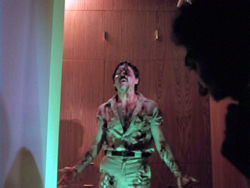 involving bright colorful lighting and ooga-booga skulls popping into frame, mostly directed against the dead man's scheming wife, her boyfriend, and, as the packaging puts it, "a psychotic transvestite lesbian assassin." Meanwhile anyone who tries to destory the Oracle meets a very nasty fate, which seems to somehow go unnoticed by the building's owners or the authorities.

Despite a few nifty visual flourishes, The Oracle feels like an indifferent project for Findlay; perhaps it's due to the cast of one-shot wonder performers (except for the aforementioned assassin, played by '80s sleaze vet La Testa in her first role). Perhaps with an eye on the commercial video market, Findlay downplays the usual injections of nudity and instead focuses on plot and character. However, with most of the participants clearly not up to the task, the viewer is instead left waiting for the next splash of blood or outrageous bit of dialogue, not to mention a kitchen fight that plays like a weird drag version of Gremlins. 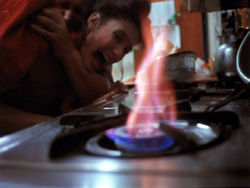 Despite the film's flaws, Shriek Show can't be faulted with their presentation. The full frame presentation looks very good, with often striking and bold colors and excellent detail. The transfer is open matte, so zoom in on a 16:9 TV to recreate the seldom-seen 1.85:1 theatrical framing if you feel so inclined; it works either way. Regardless of how one feels about the film, the disc is easily worth picking up solely for the participation of Findlay herself. Her take-no-prisoners approach can be found in the commentary track (which offers some startling revelations about many people involved in the film) and video interview where, in a moment already notorious among fans, she professes her hatred for the horror genre (despite the fact that she returned to it so many times!). She's fairly dismissive of her work but maintains an amusingly casual attitude, certainly more so than the borderline abusive antics of Doris Wishman. Other extras include the original trailer, a TV spot, stills and photo galleries with a bonus article, and a batch of Shriek Show promos for two other Findlay titles (Tenement and Blood Sisters) as well as All the Colors of the Dark and Choking Hazard.