One of many notorious box office misfires during the early 1980s when the age of golden boy film school directors began to wane, One from the Heart was undone more for its bloated production history than its qualities as a motion picture. Fresh off the harrowing, seemingly endless experience of Apocalypse Now, Francis Ford Coppola attempted to steer his fledgling American Zoetrope studio into sunnier territory with this puffball romance, a 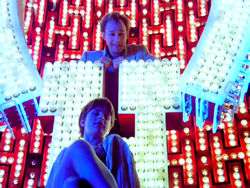 musical tribute to everything from MGM musicals to The Red Shoes. Despite the less than positive experience of his Finian's Rainbow, Coppola had enough faith in the genre to give it another go (and then another one later with the decidedly more satisfying The Cotton Club); while the end result didn't live up to expectations, it has developed something of a cult following and, as luscious eye candy, it certainly has its strong points.

In Las Vegas, decorator Frannie (Garr) comes home to her boyfriend of five years, Hank (Forrest), who woos her with the promise of plane tickets to Bora Bora. Unfortunately their bliss is disrupted by a petty (and incredibly awkward) fight in which she reveals that she kissed their boozing pal, Moe (Harry Dean Stanton), on New Year's Eve, while Hank committed a similar, equally silly indiscretion. Soon it's splitsville for the couple, who first run to their respective best friends but soon develop eyes for other, more alluring partners. Frannie meets a singer, Ray (Julia), who turns out to be a waiter and quits his job when she pays him a visit on the job (the film's best scene), while Hank is smitten with circus acrobat Leila (Kinski). Frannie and Hank continue to bump into each other and fight like cats and dogs, but will true love finally win out? 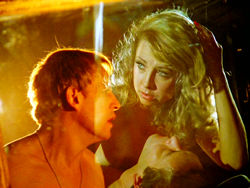 How much you enjoy One from the Heart will largely depend on your tolerance for Tom Waits, since his bluesy music floods almost every scene in the film (with an occasional interjection from Crystal Gale for good measure). The musical commentary is an interesting twist at first, but its constant presence becomes wearying after a while; the razzle-dazzle color scheme similarly wears out its welcome before the end, but the dynamite Vittorio Storaro photography does yield a few nice moments, including an impressive street party led by Garr and Julia. While all of the actors are game, it's hard to get over the fact that both Julia and Kinski are far more interesting and appealing characters than the two leads, whose plight never elicits much sympathy. Incidentally, this is also one of the hardest PG-rated movies of its era; coarse language abounds, and Garr seems to tear her top off in every other scene for no apparent reason. (However, in a blow for Kinski fans, Nastassja stays under wraps.)

Zoetrope's lavish two-disc set does a sterling job with very difficult source material in every possible sense. The neon hues look appropriately bright (bordering on blinding), while the full frame compositions look about right. (American Zoetrope also prepared a D-VHS edition in the same aspect ratio.) The 5.1 audio mix is simply dynamite, filling the speakers with a smooth blend of music and ambient sound that punches up even the quietest scenes without becoming distracting. On his commentary track, Coppola notes that this version has been re-edited to "crystallize" some of the plot points (no snickering there, kids), which unfortunately also entailed hacking off most of the amazing opening sequence, basically a single-shot Touch of Evil stunt featuring a lovely dissolve involving Garr and Forrest looking in a mirror. The excised footage (about six minutes' worth) appears as an extra on the second disc, but its absence from the film is bewildering. Coppola's commentary is informative and largely technical in 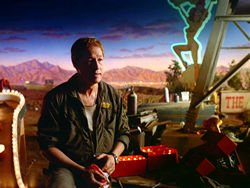 nature, discussing the intentions of the film as a throwback to the days of live television and the various technological innovations which allowed for on-the-spot editing. A third audio track contains an isolated 5.1 mix of the music score.

Along with the aforementioned extended opening, disc two contains several other extended and alternate scenes, mostly consisting of extra chit-chat and camera acrobatics. Most stunning are the copious documentaries, three produced for the new DVD: "The Dream Studio," "The Electronic Cinema," and "Tom Waits and the Music of One from the Heart." All three paint a fascinating picture of a completely independent studio charged to make a revolutionary, hi-tech experience that sadly never connected with the public. "The Making of One from the Heart" was produced to coincide with the theatrical release and is one of those half-hour making-of specials commissioned for channels like HBO. It's an interesting first-hand portrait of the filmmakers, with a much younger Coppola firing on all thrusters while working on the film. Also included are videotaped rehearsal footage (in rougher but adequate condition), alternate and demo recordings of Waits' music, a photo gallery, and home movie footage from Zoetrope. The theatrical trailer is tucked away in the gallery section, so look closely for it.