Apart from the reliable but not exactly prolific Dario Argento, the giallo seemed to be on life support in the mid-1980s with the Italian horror industry in general starting to take greater advantage of the home video market. 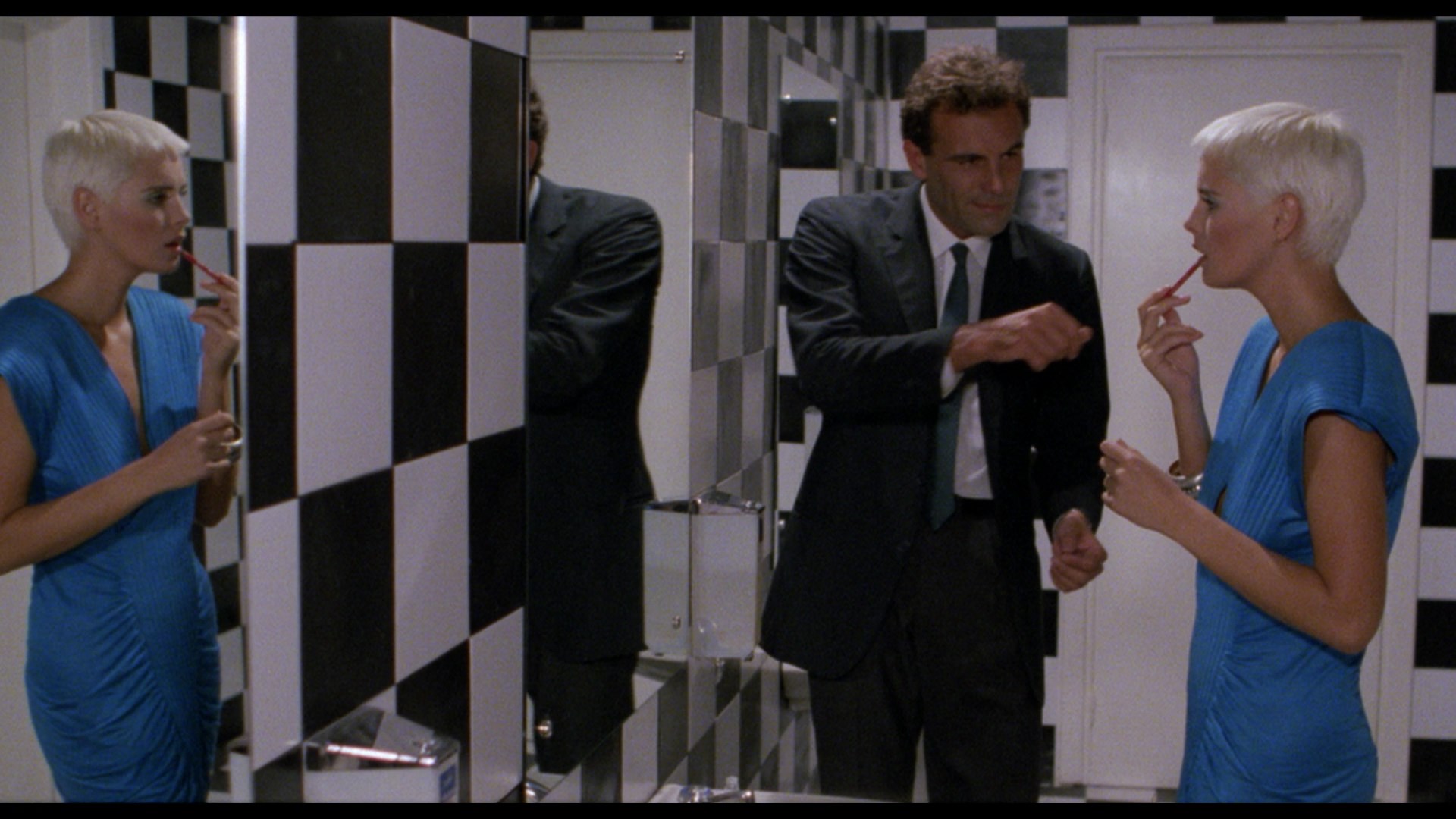 However, an unexpected shot in 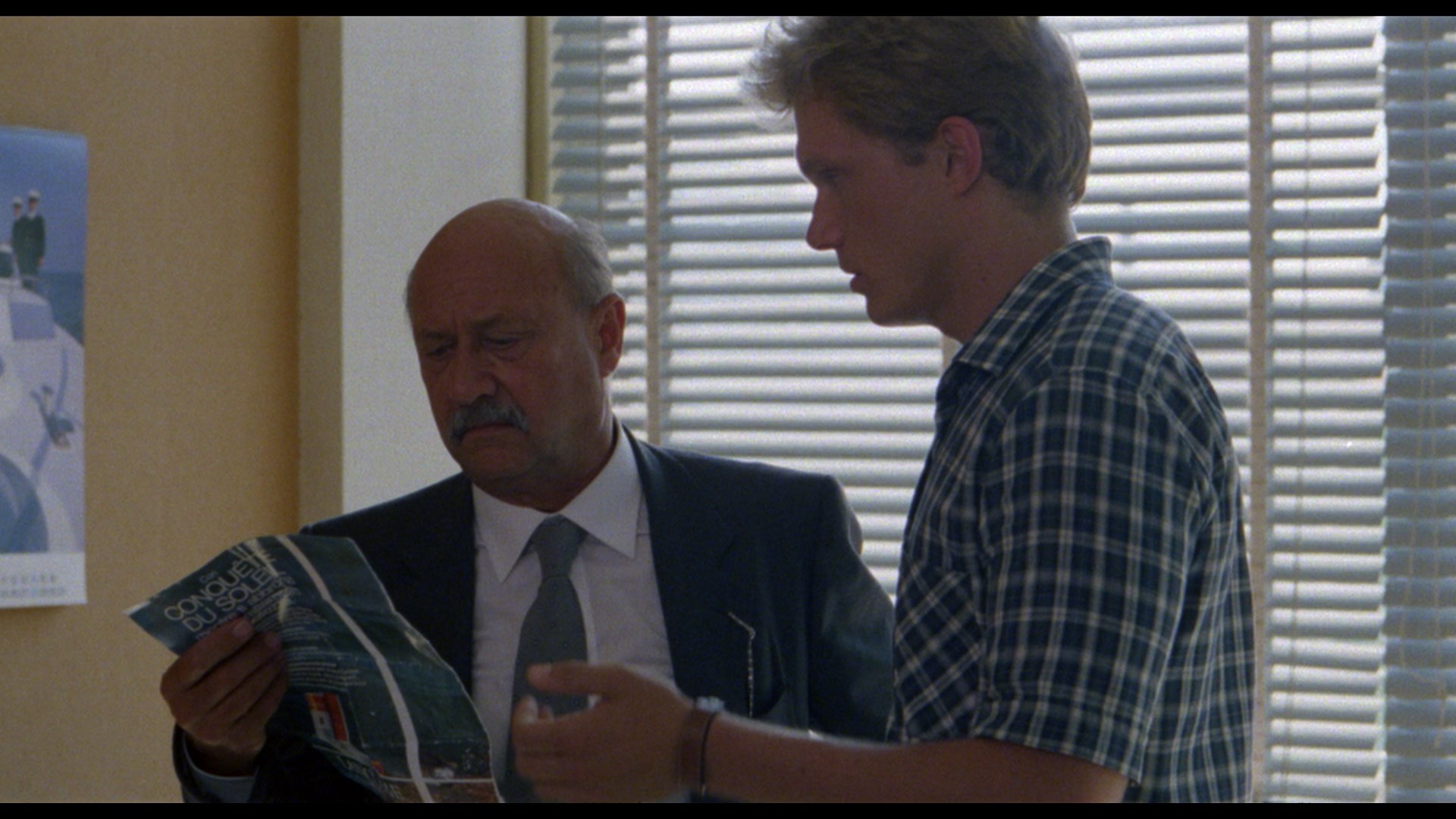 the arm arrived in 1985 with Nothing Underneath (or Sotto il vestito niente), a glossy thriller that essentially updated the Blood and Black Lace formula of a fashion model murder parade for the MTV era. Featuring a surprisingly high caliber of directing and writing for the period, it turned out to be a successful Italian export for the next few years including a belated but very popular 1988 VHS release from Sony Video (plus accompanying cable TV play well into the early '90s). It was also the biggest worldwide release for director Carlo Vanzina, who had already dabbled in gialli with 1983's interesting Mystère and would do his own underwhelming sequel, Sotto il vestito niente - L'ultima sfilata, a very TV-flavored follow-up barely exported as The Last Fashion Show. However, there was also a Sotto il vestito niente II in 1988 from director Dario Piana, which features no direct narrative connection but also involves a serial killer in the fashion industry. Featuring a much more prominent music video influence, it was circulated in English as Too Beautiful to Die but didn't get much play outside Europe and Japan at the time. Now both of those '80s gialli have been collected on Blu-ray in the U.S. by Vinegar Syndrome, finally giving them the red carpet treatment they've needed for a very long time. 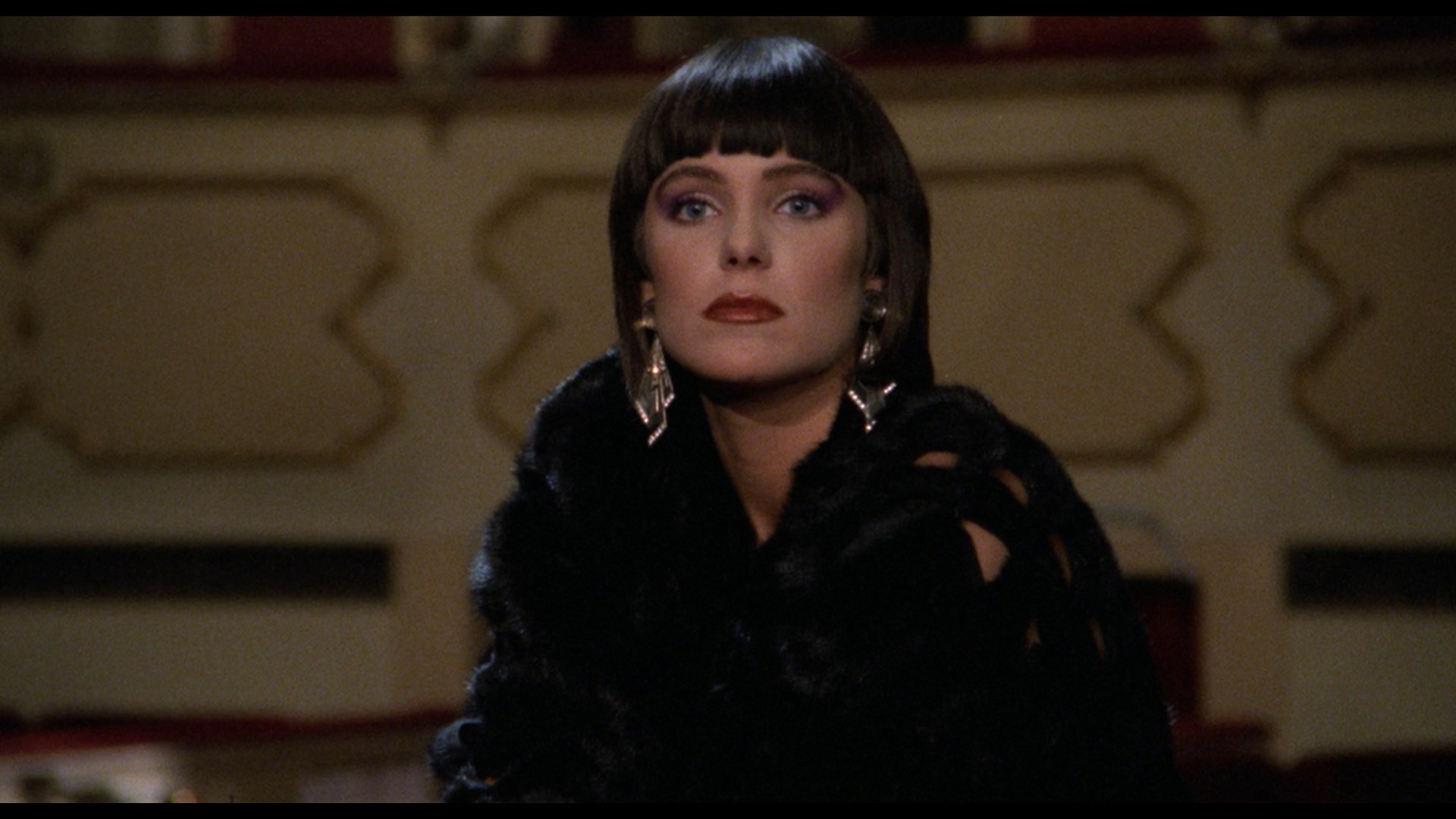 While going about his duties as a Yellowstone park ranger (yes, 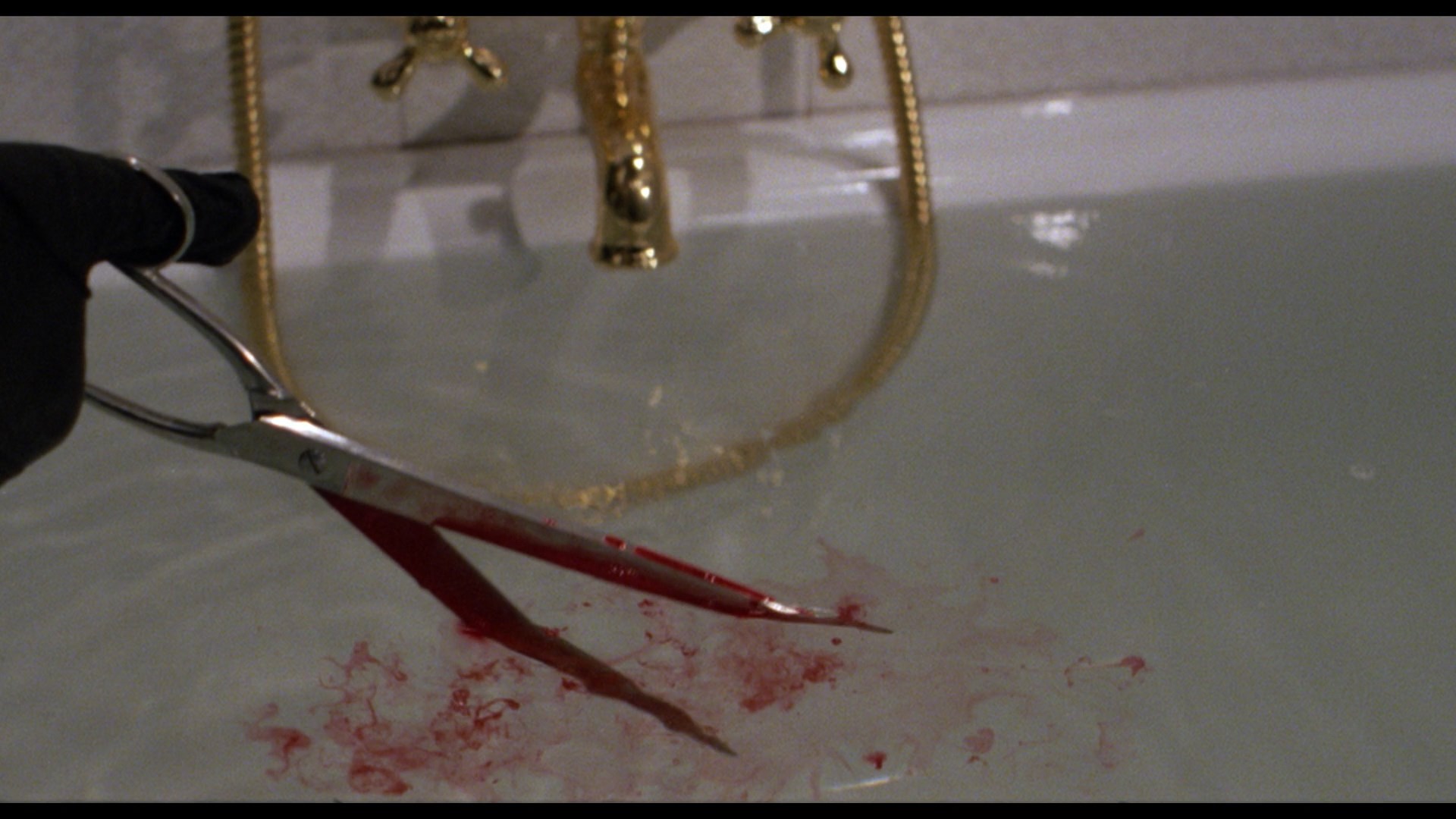 there is location shooting), Bob (Schanley) starts having disturbing psychic visions involving his twin sister, Jessica (Perring), a successful model in Milan thanks to her striking bleach-blonde look. Unable to get in touch with her, Bob jets over to Italy to find that his sister has disappeared. He ends up seeking help from Inspector Danesi (Pleasence, hot on the heels of Phenomena), but all of the clues seem to lead to other models who end up being stabbed to death with a pair of scissors. Meanwhile he becomes attracted to another top model, Barbara (Danish supermodel Simonsen), and learns that the deadly truth behind the slayings might cost him his life.

Just sexy and bloody enough to titillate without going outside mainstream commercial tastes, Nothing Underneath has held up very well over the years while delivering some of that oddball Eurocult flavor we all know and love (particularly an unforgettable bit with Schanley accompanying Pleasence to a Milanese Wendy's where the latter slurps down spaghetti). As long as you ride along with the supernatural angle that kicks off the story, it's also satisfying as a murder mystery with a truly fantastic finale that really delivers the goods (along with a bit of Four Flies on Grey Velvet style). Not to be overlooked is the memorable score by Pino Donaggio (obviously influenced by his recent work on Body Double), plus a few fun needle drops by Murray Head, Gloria Gaynor, and Karen Young.

Despite its solid reputation, Nothing Underneath has been maddeningly difficult to see since the '90s apart from a 2008 DVD from Another World for the Scandinavian market. Luckily the Vinegar Syndrome release fixes that with a lovely new 4K scan from the 35mm original negative (as with the sequel), and it looks better here than ever before. It's also 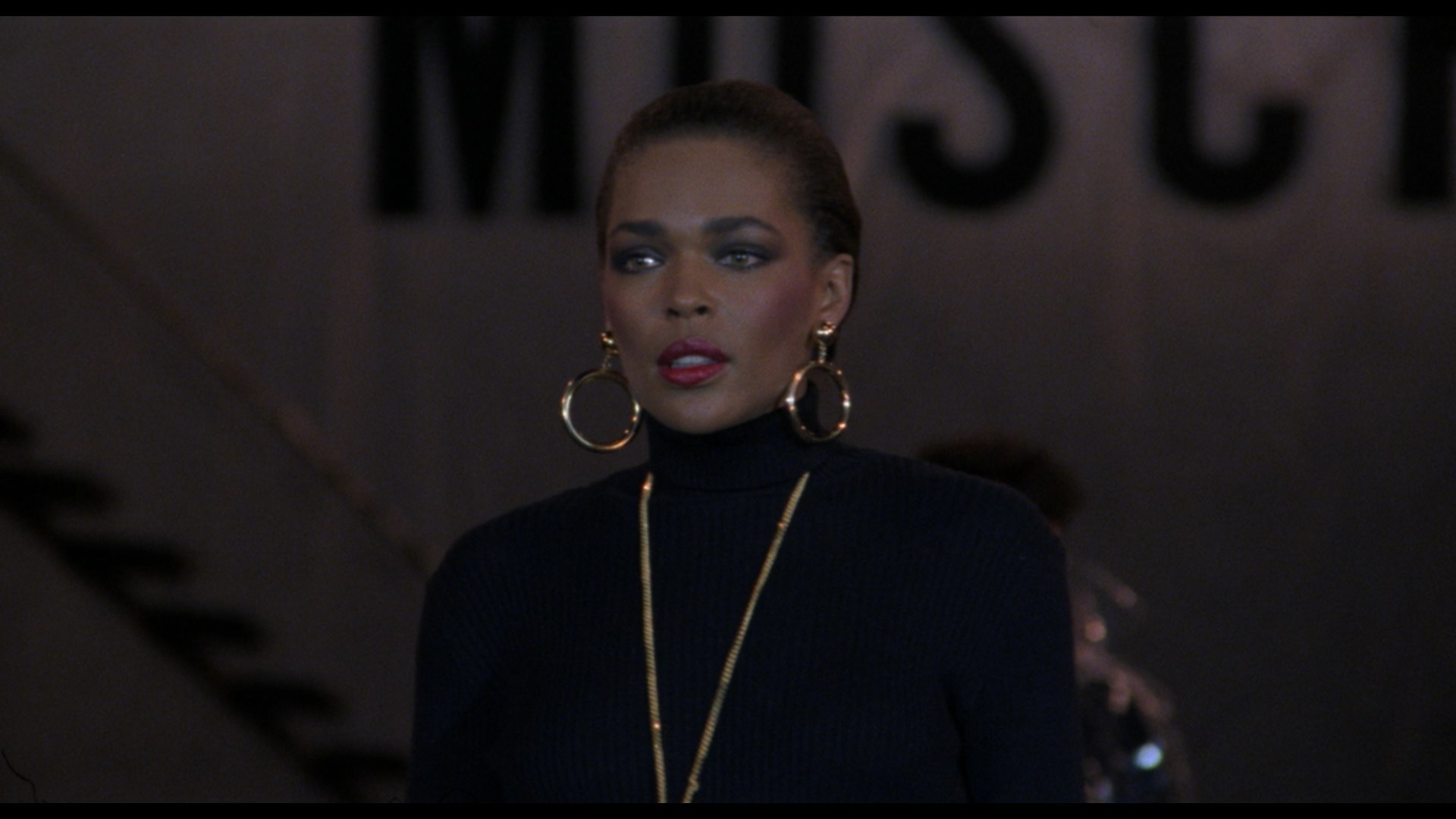 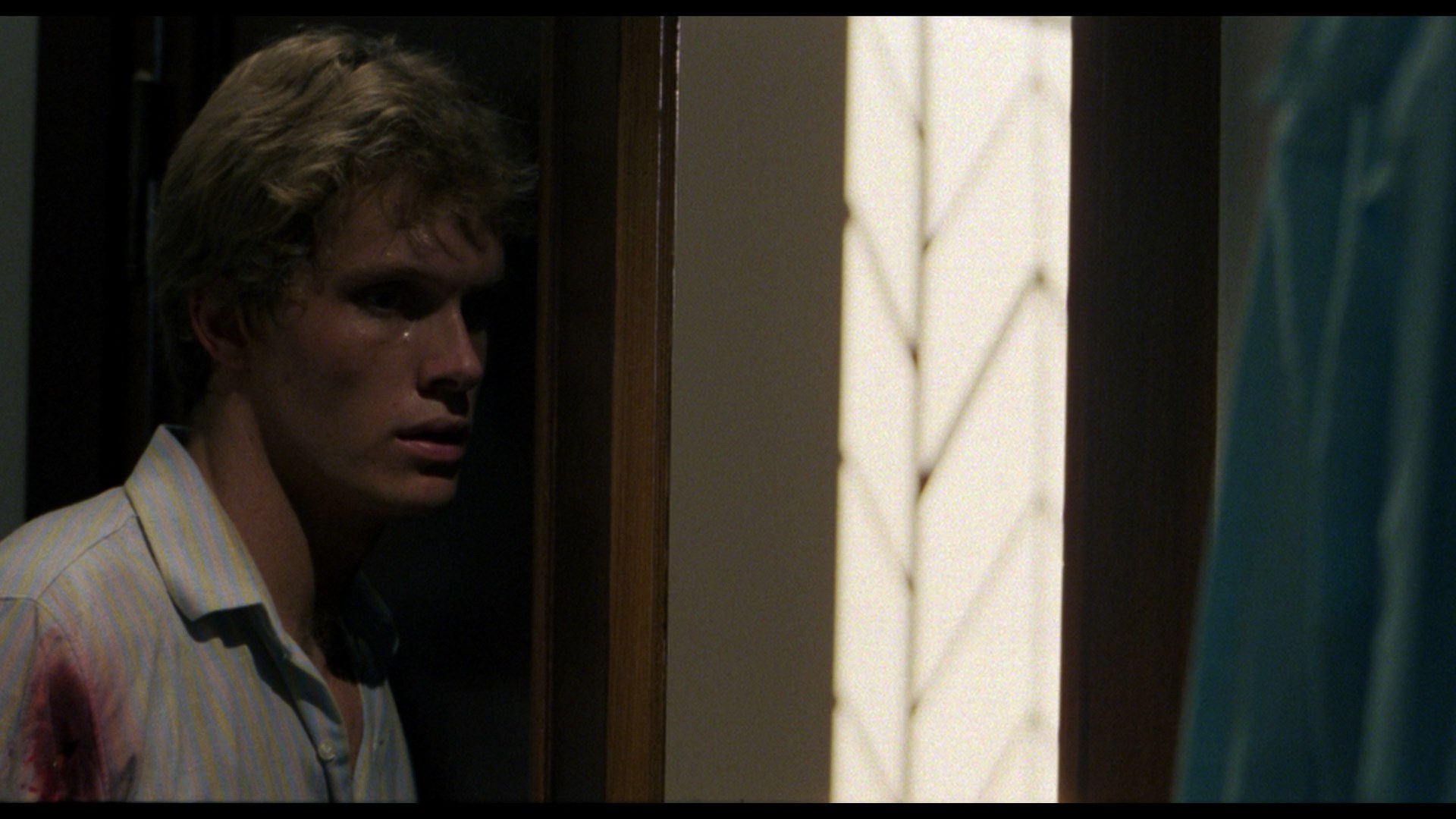 frame, especially in the opening scenes-- a quirk in past presentations as well. Since the film was shot in English with live sound, that's really the best way to watch it here with the DTS-HD MA 2.0 stereo track sounding great. Optional English SDH subtitles are provided, and the Italian dub is also included (no translated subs) just in case you feel like comparing. The film also defaults on playback to English with subtitles appearing for Italian text on screen, as does the second feature. You also get two new audio commentaries starting with one by the foursome from The Hysteria Continues, who get to have fun chatting about the film's VHS history, the purported source novel (which ended up having virtually nothing to do with the film), the possibly parodic aspects, the state of '80s gialli, and more. The second track with Rachael Nisbet takes a more scholarly approach as she dissects giallo conventions, the importance (and unusual nature) of the locations, the Donaggio score, the nods to Hitchcock, the real-life modeling backgrounds of some of the actors, and the box office performance of the series. In "Murders a la Mode" (28m34s), screenwriter Enrico Vanzina recalls the genre-hopping work he and brother Carlo were doing in the mid-'80s in various genres, working with producer Achille Manzotti, the real-life Milan tragedy that filtered into the story, and the influence of Brian De Palma and other filmmakers. In "Murder He Wrote" (28m56s), screenwriter Franco Ferrini goes into his own work around the same time, his first work with Enrico, the background behind the novel (which was originally intended as a Michelangelo Antonioni project!), and the process of reworking the story with an American protagonist and a more traditional giallo approach. "High Fashion Music" (12m36s) features Donaggio (who came back for the 2011 film) explaining how he was brought on the project because of his De Palma work and responded to the fashion world setting, as well as the nods to his Body Double work integrated into the score and the stylistic approach he decided to take. Finally in "Models, Murders and Italy" (19m20s), which is sadly plagued by iffy audio, Schanley chats about his acting career to that point mostly on American TV, his positive response to the script, his 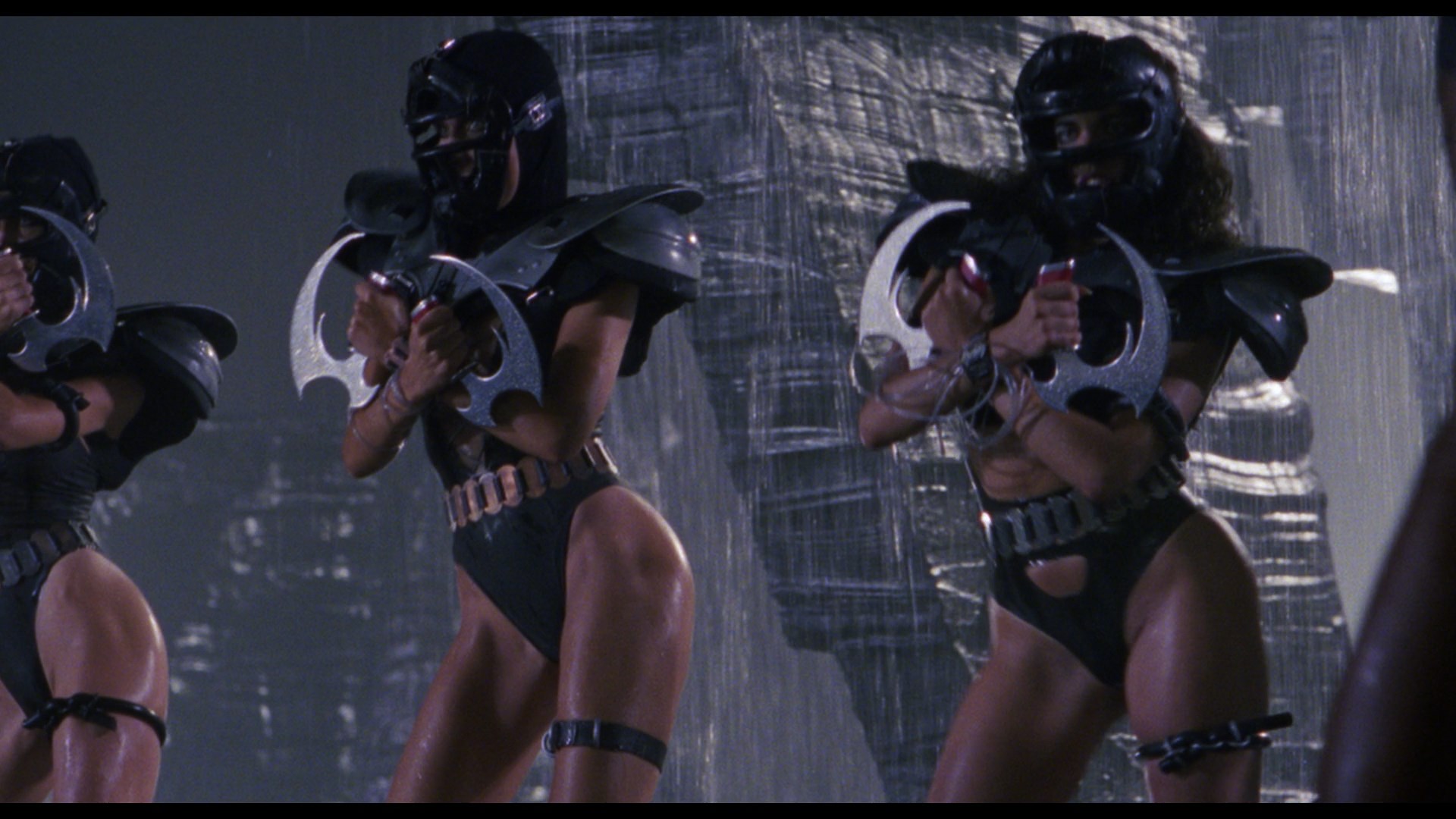 experiences shooting in Rome and Milan, the tongue-in-cheek 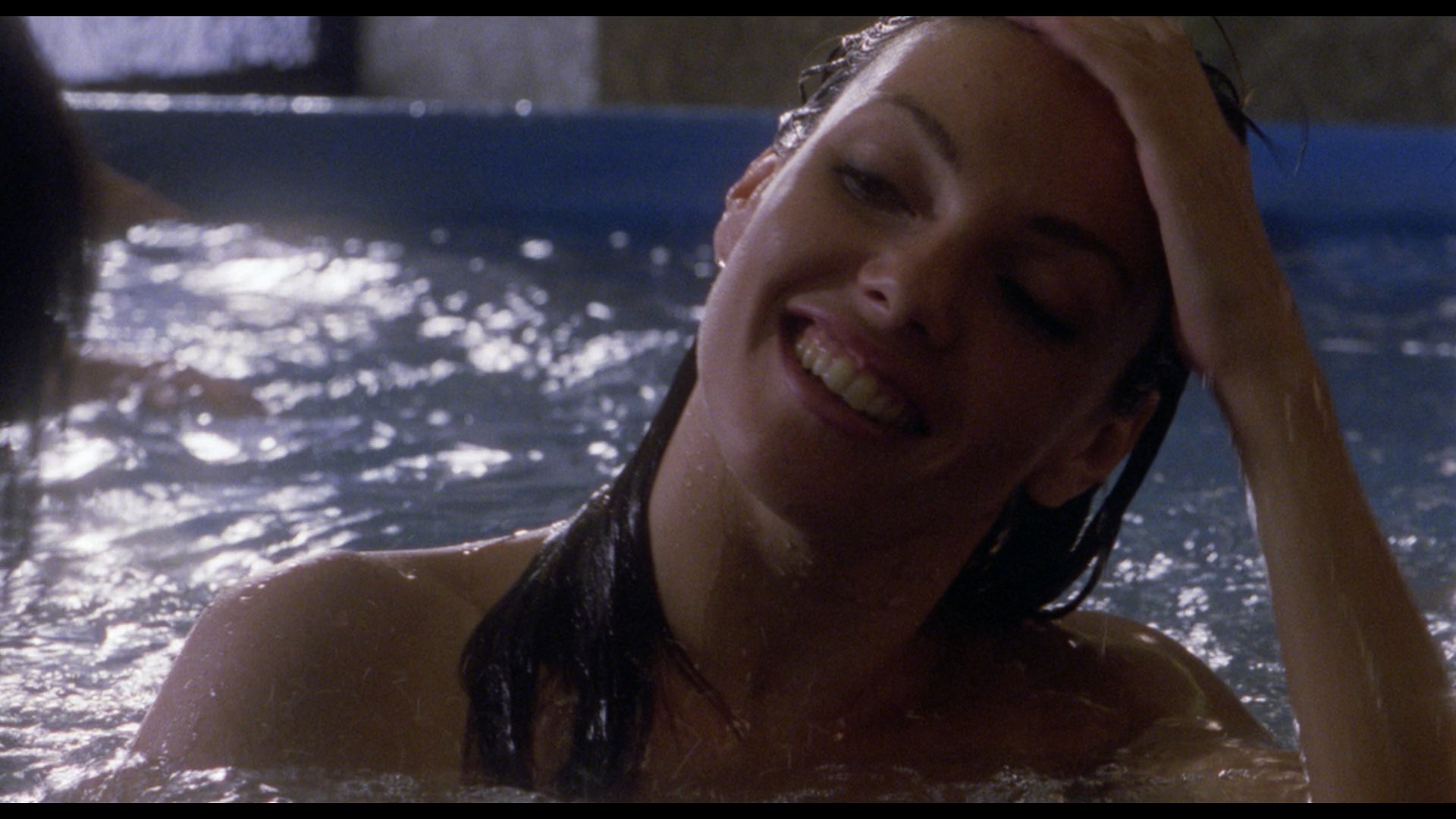 nature of some elements including Pleasence's performance (and that Wendy's scene), the funny story behind his cigarette smoking scene, and the background of De Paolis Studios.

As for Too Beautiful to Die, that one's been even harder to see with no U.S. video release of any kind until the Vinegar Syndrome edition. Pushing its flashy visual style into total overdrive with none of the participants from the prior film apart from Manzotti, this one takes a while to even establish its giallo credentials with the first 40 minutes or so setting up the modeling environment and the trauma that eventually kicks off a wave of slayings. Following a glossy lingerie ad shoot, sleazy modeling agent and computer porn game addict Alex (Tamberi) sets up a hot tub party for the models at his house. Unfortunately one of them, Sylvia (Gioia Scola), doesn't take too kindly to being sexually assaulted in the process, abetted by her heartless colleagues. When the victim turns up dead in a car crash with a bullet in her head, New York model Melanie (The Black Cat's Guérin) is brought in 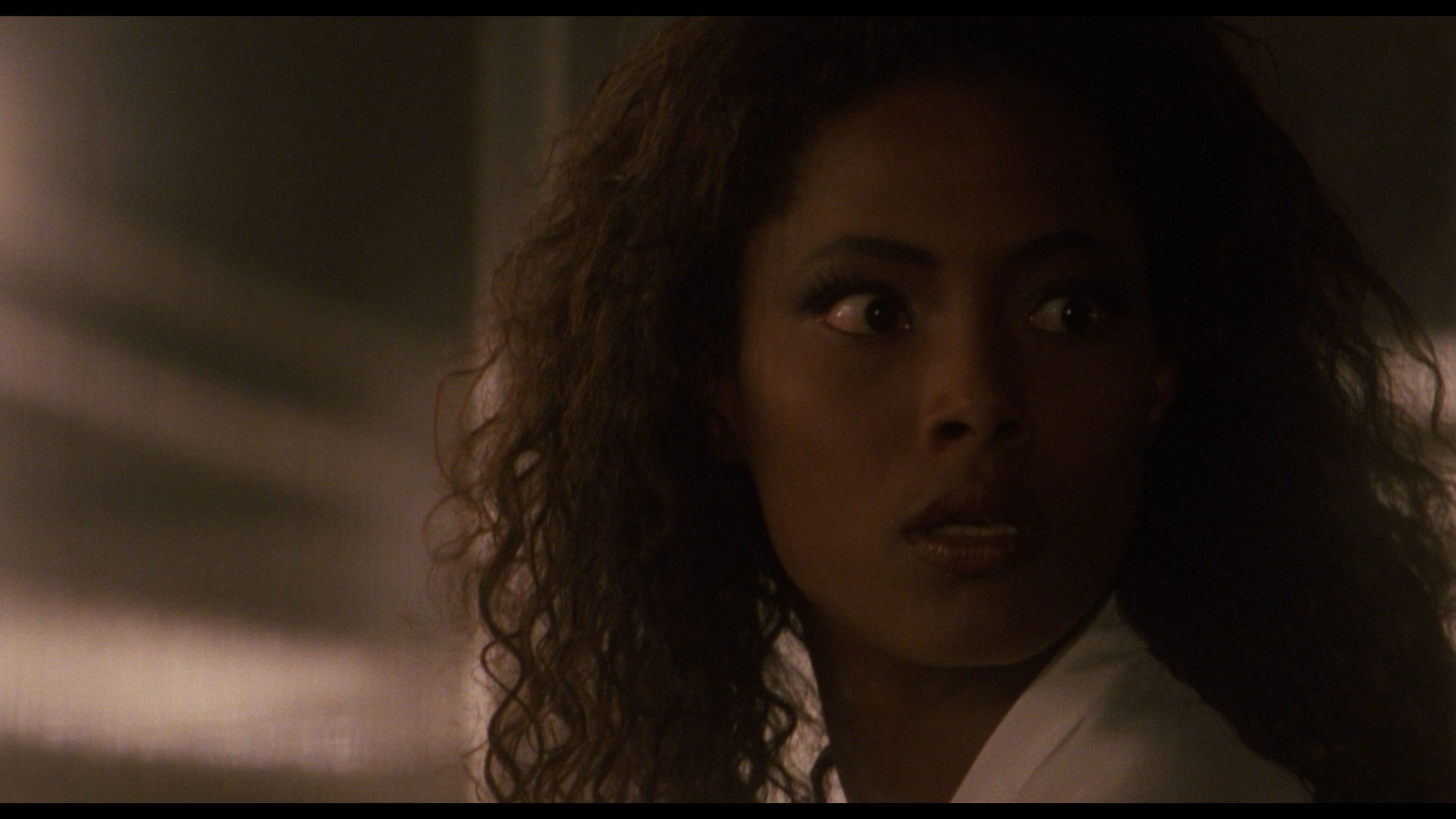 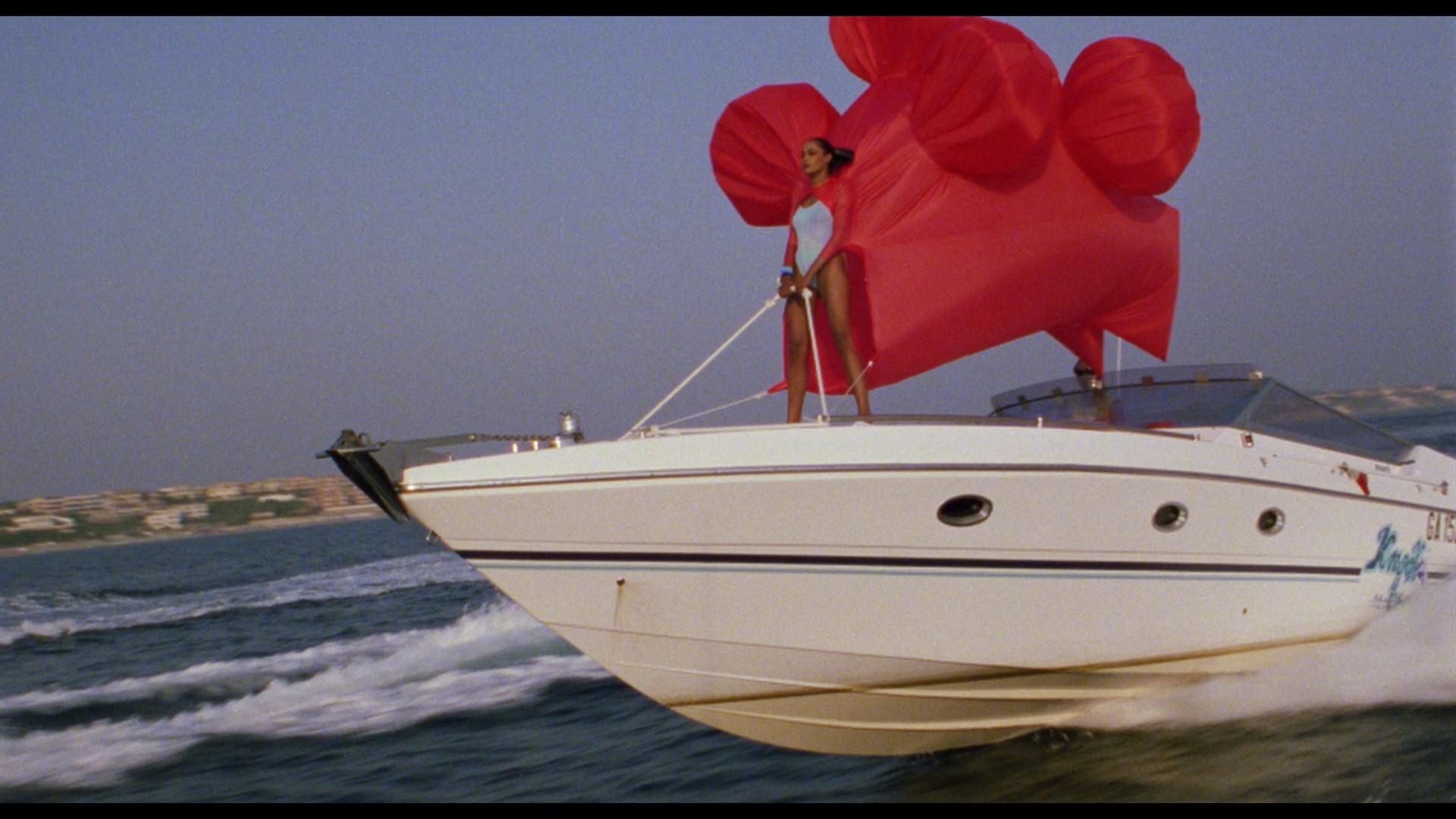 replacement by director David (Gendron), but soon the guilty models are being killed off one by one in between elaborate music video shoots that have to be seen to be believed.

Extremely flashy, Too Beautiful to Die is definitely an acquired taste that depends on your love of '80s kitsch (including the most jarring cinematic use of Huey Lewis and the News ever -- twice!). In perhaps another nod to Body Double, you also get prominent use of Frankie Goes to Hollywood here as well, in this case the propulsive "Warriors of the Wasteland." For giallo fans the real meat here can be found in the second half when the murder plot really kicks in, featuring a fantastic weapon and a couple of bravura stalk and slash sequences in the studio. The end result is definitely a step down from the previous film, but it does have its gaudy pleasures if you're in the right mood and serves as an even darker portrayal of the fashion industry from top to bottom.

Again the new 4K scan from the camera negative means you get to enjoy this film looking better than ever before, and the English stereo track sounds wonderful with lots of channel separation throughout. 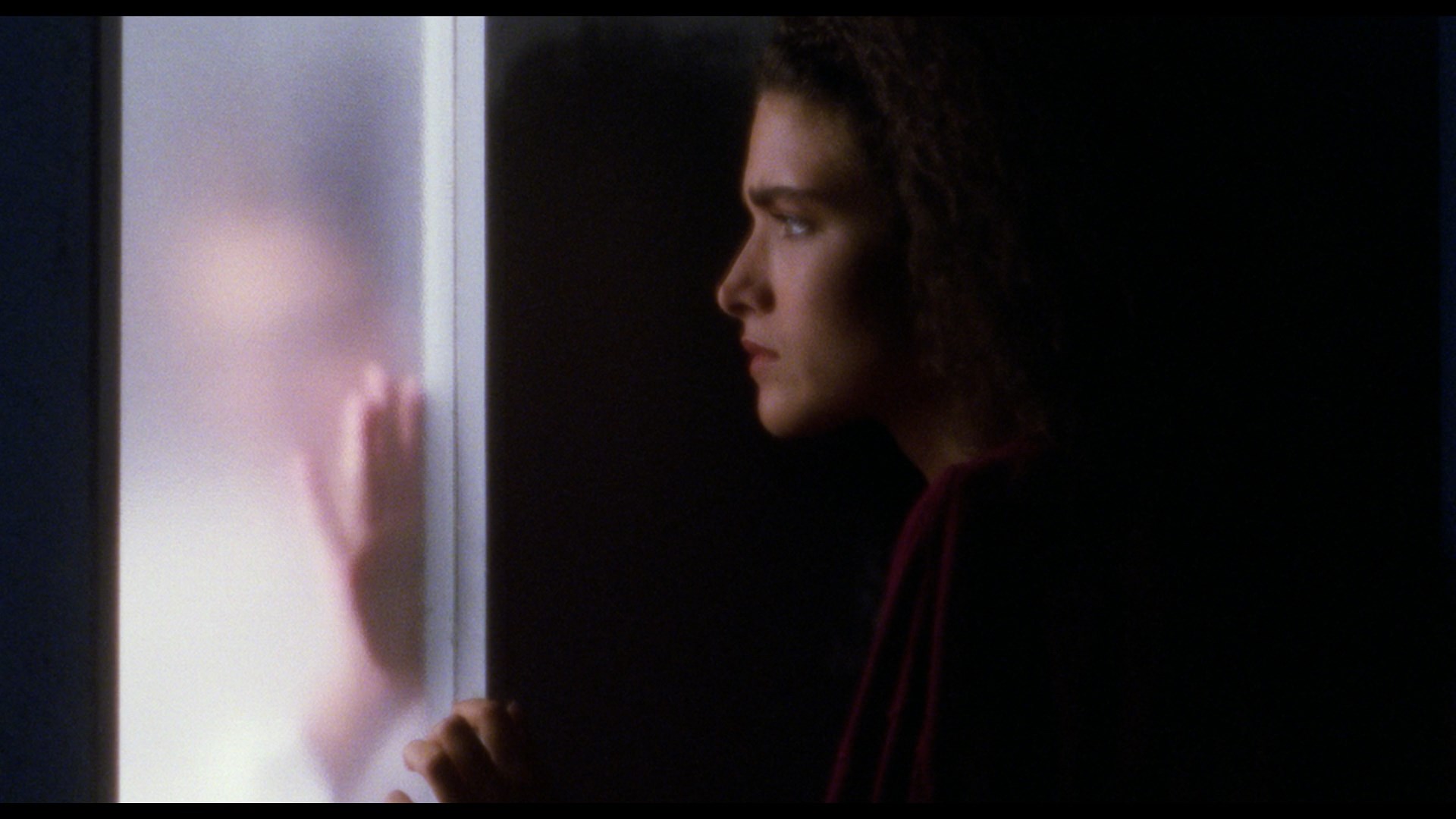 This was also shot with live English sound and works 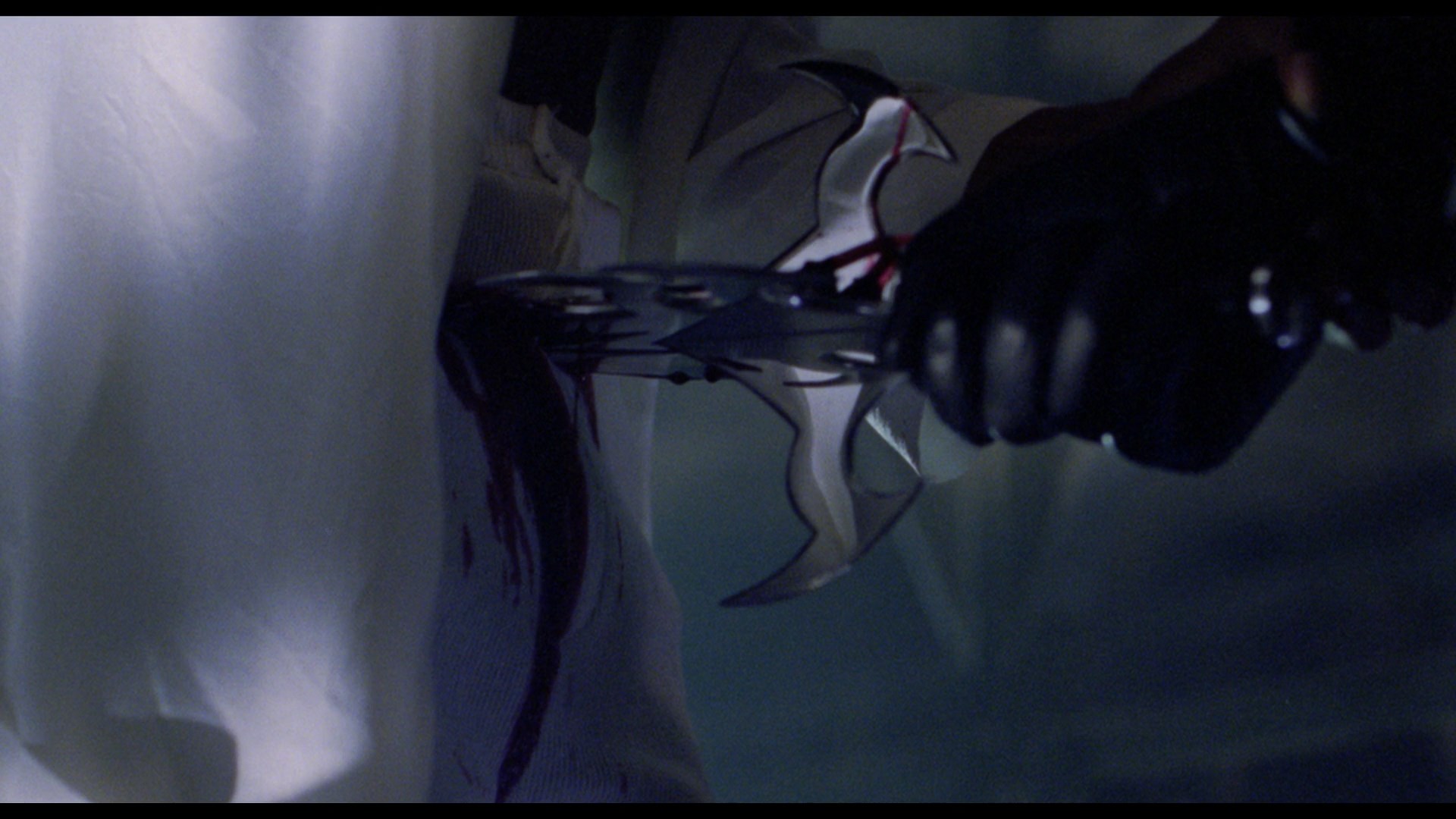 best that way, but the Italian track is present as well for the curious. Nisbet provides another well-researched and interesting commentary track in which she parses out the visual choices in the film and their possible symbolic significance, the pop culture references studded throughout starting with that lip sofa seen over the main titles, the backgrounds of the actors, and the context with other Italian thrillers of the decade. In "Nothing True But The Eyes" (42m13s), Piana talks about his background in advertising, the creation of the script and his own contributions, his working relationship with Manzotti, the "more abstract" nature of this film compared to its predecessor, the selection of the songs, and the process of picking out the film's title. Also included are Piana's storyboards for a very different alternate ending (1m59s) and a handful of deleted scenes (12m21s).